Hey all,
I recently started a few different threads but am now consolidating it all into a build thread. There's going to be a lot involved here for the next several weeks.
To summarize other threads, all I've done so far is install a new MAP sensor, inspect for / find / temporarily patch an exhaust leak at a manifold output so that i can work on the truck in the driveway while idling and not pass out, remove the plastic fenders, remove the sun visor and front rig (will consider putting these back on after all cleanings/paintings take place), inspected the body lift bushings and body mount bushings and determine they all need to be replaced, taken the seats out / cleaned / reinstalled, and that's about it.
The underside looks pretty darn good to my eye, except the mounts. There is no major frame rot. One small hole. There are some places rotted in peripheral parts underneath which i'll photograph later. But as far as i can tell the bones on this thing are good.
There's some scrappy paint over top of the OEM slate black/grey metallic paint. The front has some strange and lame bedliner type of black stuff that already flakes away in the rain, and the bed has some kind of hand brush stroked primer or something that does peel off by hand with some patient labor. No idea what their plan was.
For multiple reasons, today i'm renting a gas powered pressure washer and hitting a lot of the truck. (Also am stripping my front porch of old paint so we can repaint this weekend!) Any recommendations on cleaning solutions is welcome. I have some Super Clean on hand and will likely use that on the engine. I decided it's dangerous to start opening up crucial spots in the engine until i do this, such as for all tune-up procedures. There's quite a bit of gunk. I also want to see how much of the crusty paint of entire exterior i can remove without damaging the OEM paint. I anticipate the black stuff flying right off mostly but having some tougher spots, but i think the grey paint will be a bit more work and possibly not be successful at all unless i add some sort of aggressive substance. It could be latex interior paint for all I know. But maybe I need to first apply some kind of stripper chemical that's capable of attacking the grey stuff without damaging the OEM paint. Sounds risky. Lastly, the tailgate is DIY painted in something else entirely, and it's jet black. No idea how it will react to pressure washing.
As for the overall situation..there's aftermarket suspension, and a suspension lift. There's the 3" body lift. There's somehow no steering column extender put in place despite the 3" body lift. The rear window needs to be replaced since it's missing an entire glass panel. The front left shock strut is dangling unattached at the bottom but the mount point is there and healthy. The rear wheel wells have some rust that i revealed after pulling the plastic fender flairs, although it's not a tragic amount and can be bondo'd. The engine lopes up and down a bit at idle, so there's probably a need for fuel line / injector cleaning, the passenger side exhaust manifold connection to Y pipe needs to be redone, the radiator fluid needs to be completely flushed, belts need to be changed, and then all basic tuneups need to be done. The frame seems pretty darn good. The truck has 84K on the odometer, and believe this number because it looks like it was outfitted for off-road pretty early in its life. The suspension mods will be interesting to discuss. I don't know anything about suspension so it'll be a learning experience here.

The goal is definitely to have fun driving into the hills on trails and not having issue. Also to have no issue around town in the snow. Daily driver sure, but only short distances, like 2-3 miles a day and occasionally 10-20 miles for a task. I'm 99% keeping the body lift in addition to the suspension lift, because i think i'll regret it if i don't. The work is sorta already done, in that i don't have to get the whole beast higher when i go to swap all bushings. Yeah the bushings work will be serious labor involving removal of rusted washers, but still it's less intimidating to be not altering the overall height. I can just go one point at a time with a jack.

Here's the truck as it was when i had it delivered via flatbed. 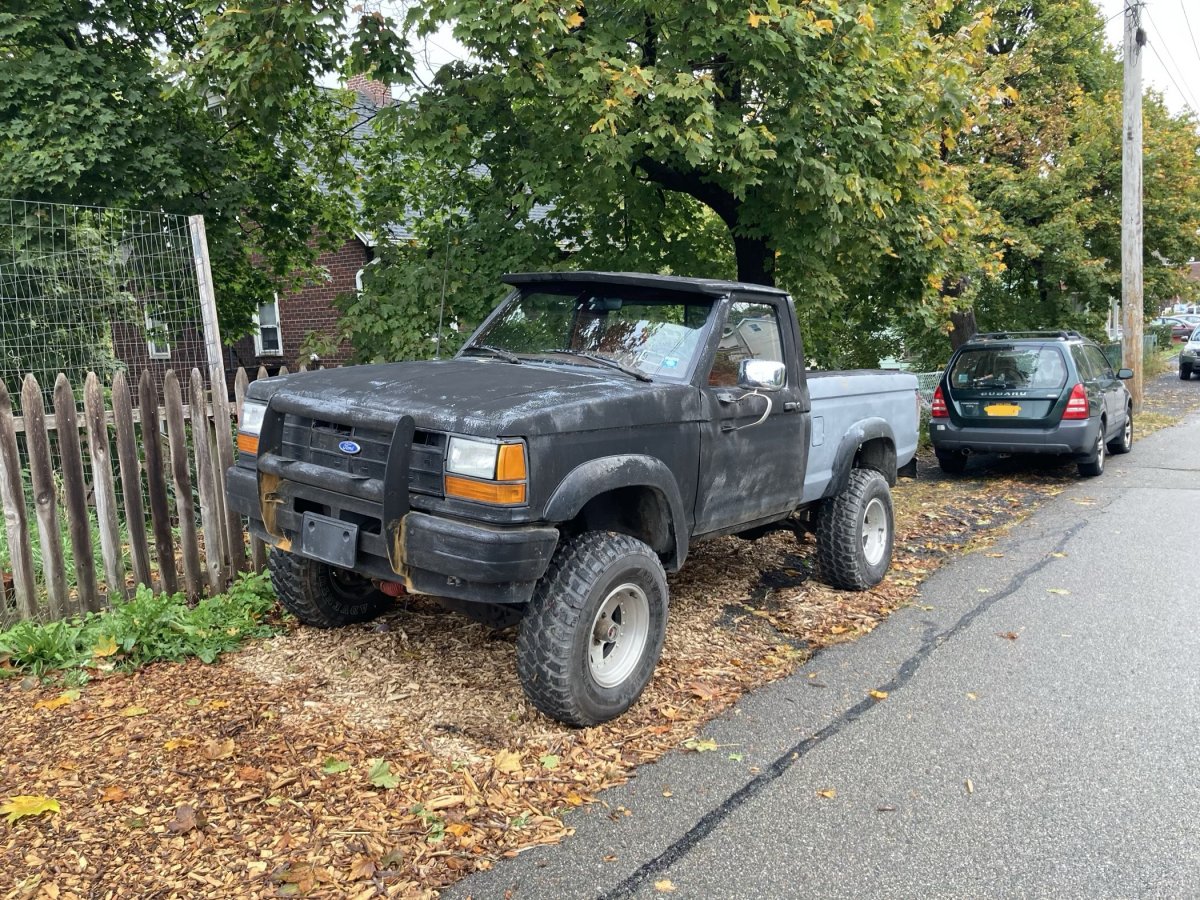 And below are some pics after removing the accessory bits.
The paint under the plastic flairs seem pretty great except for the edge rust in rears.
The front left fender seems weird with alignment. I think it might not be OEM. It's not seated perfectly flat, sitting like a 1/4" or so too high everywhere. The hood is missing the left rubber resting piece in front so this makes the alignment a little worse. But there's no doubt something is up with the fender itself. From scraping paint away, it seems like it might be unpainted. So maybe it's a not perfectly designed aftermarket replacement panel. I may need to replace this.

I'll preface that by saying that i have a longer game plan to, if this truck works out, swap an 83-88 nose onto this truck. For me there's no question that the 1st gen front end looks a lot better. I do enjoy this 89 look still though, the more i look at it. Being lifted this much and with bigger tires, the 2nd gen appearance somehow works better for me than an OEM 89-92 truck height/stance. So we'll see. But i believe the swap will likely take place. This of course influences decisions regarding panels, since it would be a bit of a waste to get the perfect 89-92 fender if i'm going to eventually get the 1st gen panel. So i might make a home brew attempt at painting just this panel to closely match the rest of the truck. Take it off and spray some color matched on somehow.

The hood also obviously has lots of sun damage. It's like half gone. But i enjoy that kind of devolved look and i'm happy to live with that for a while and just get the left fender a little more cohesive looking and stick with that overall until i can spend time/money on a 1st nose swap.

The big mystery is what the bed looks like under the grey paint!!!!! ??? Maybe will know later today. 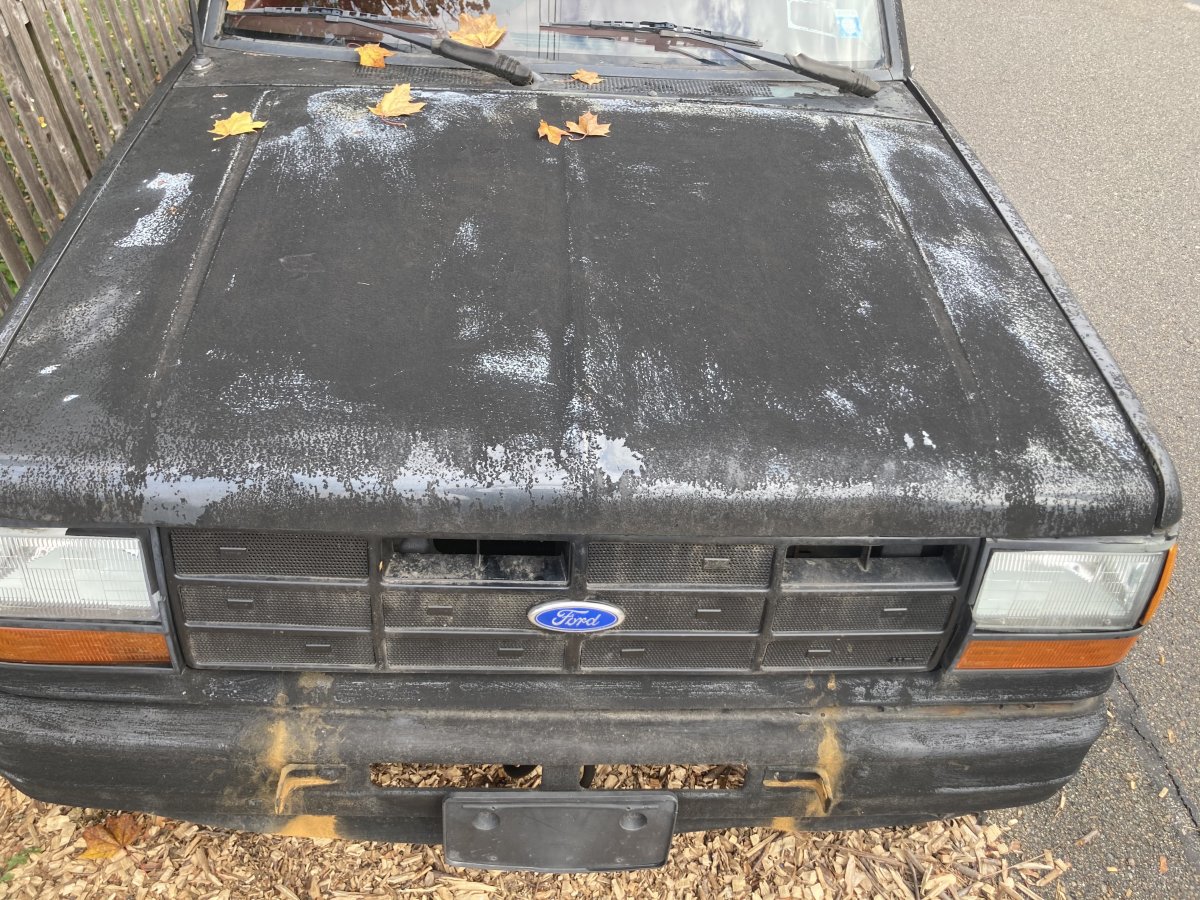 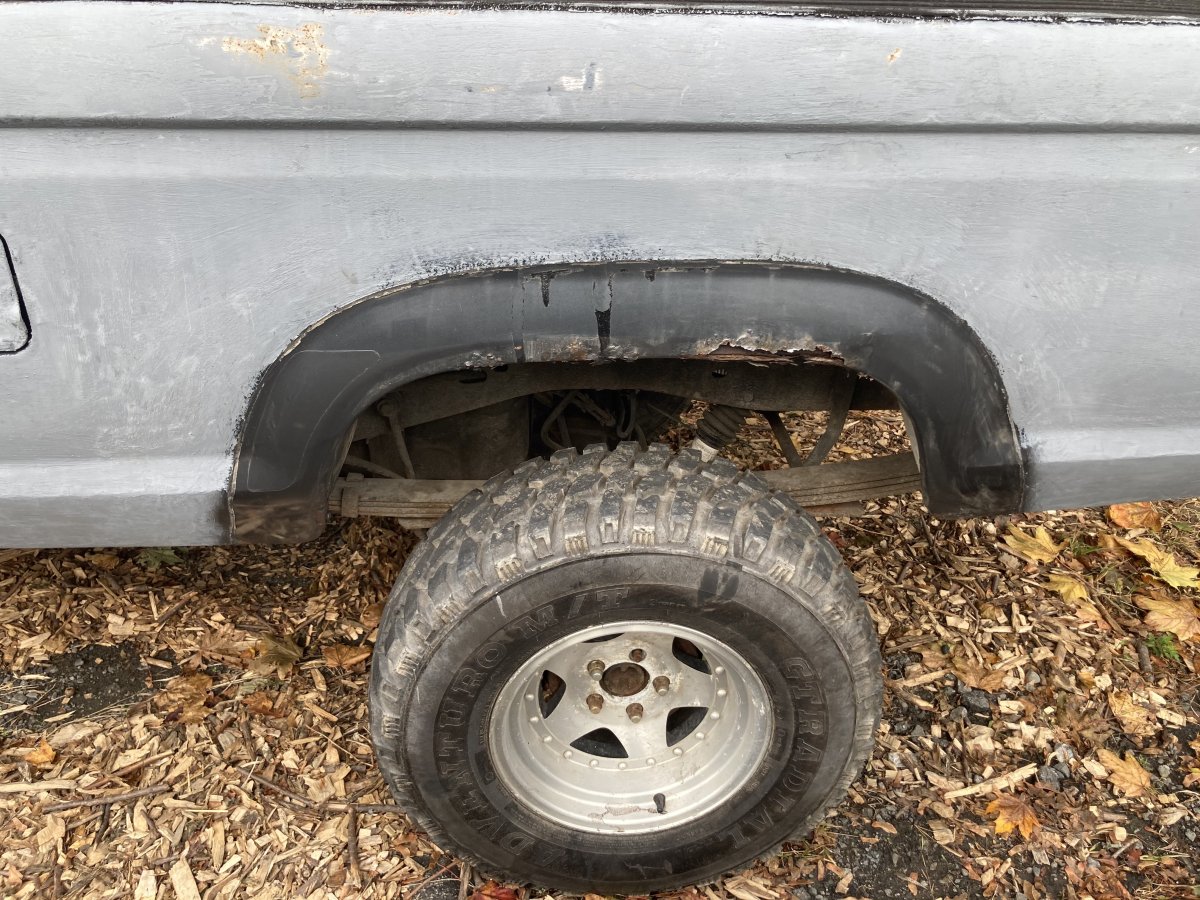 coming off in sheets
This is the likely unoriginal panel. 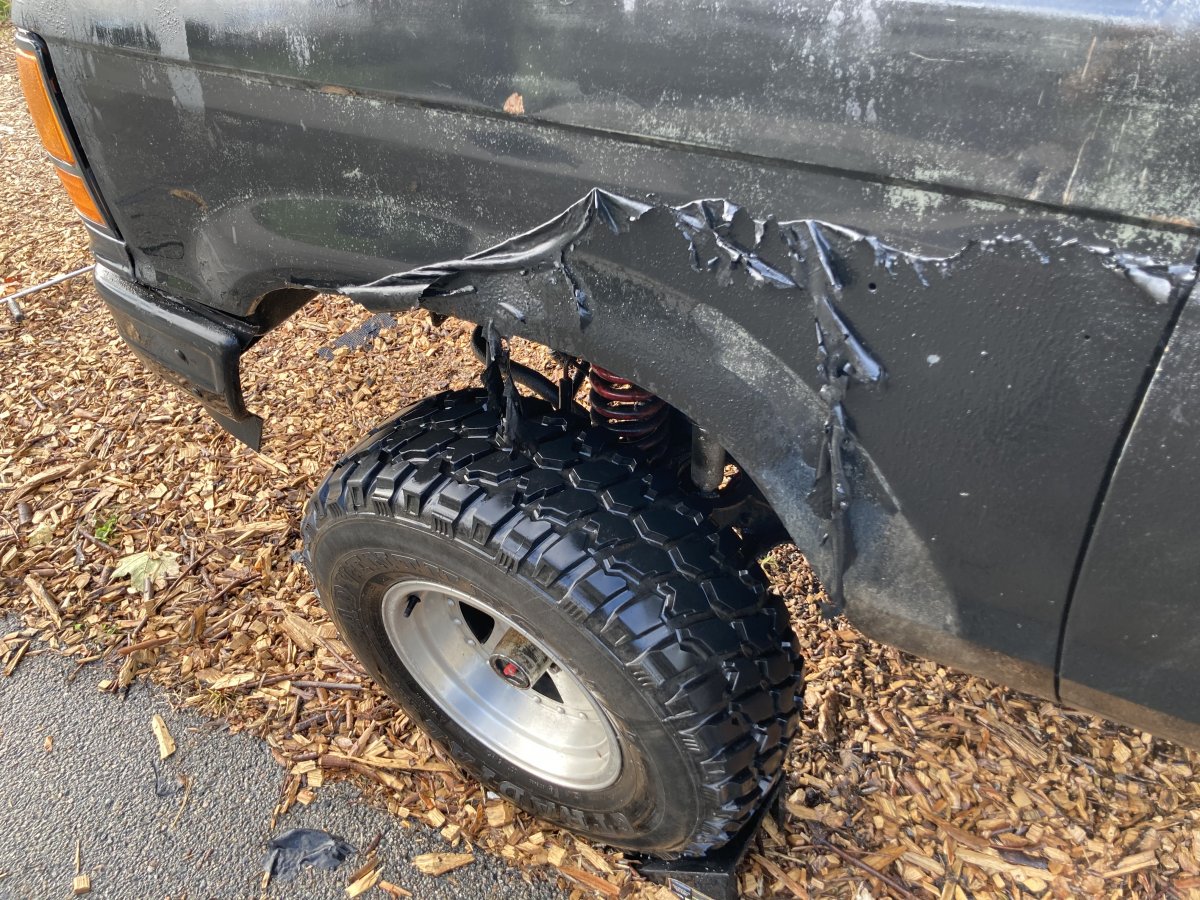 Mine was brush painted with rustled when I bought it.

Hooked my pressure washer up to my hot water tank and it came right off.


Easy way to test it is dump boiling water on a towel covering a section, wait a few seconds to allow it to warm up, and see if it scrapes off. Should make things easier.

Got the black off.
Suddenly patina.
Decision time. 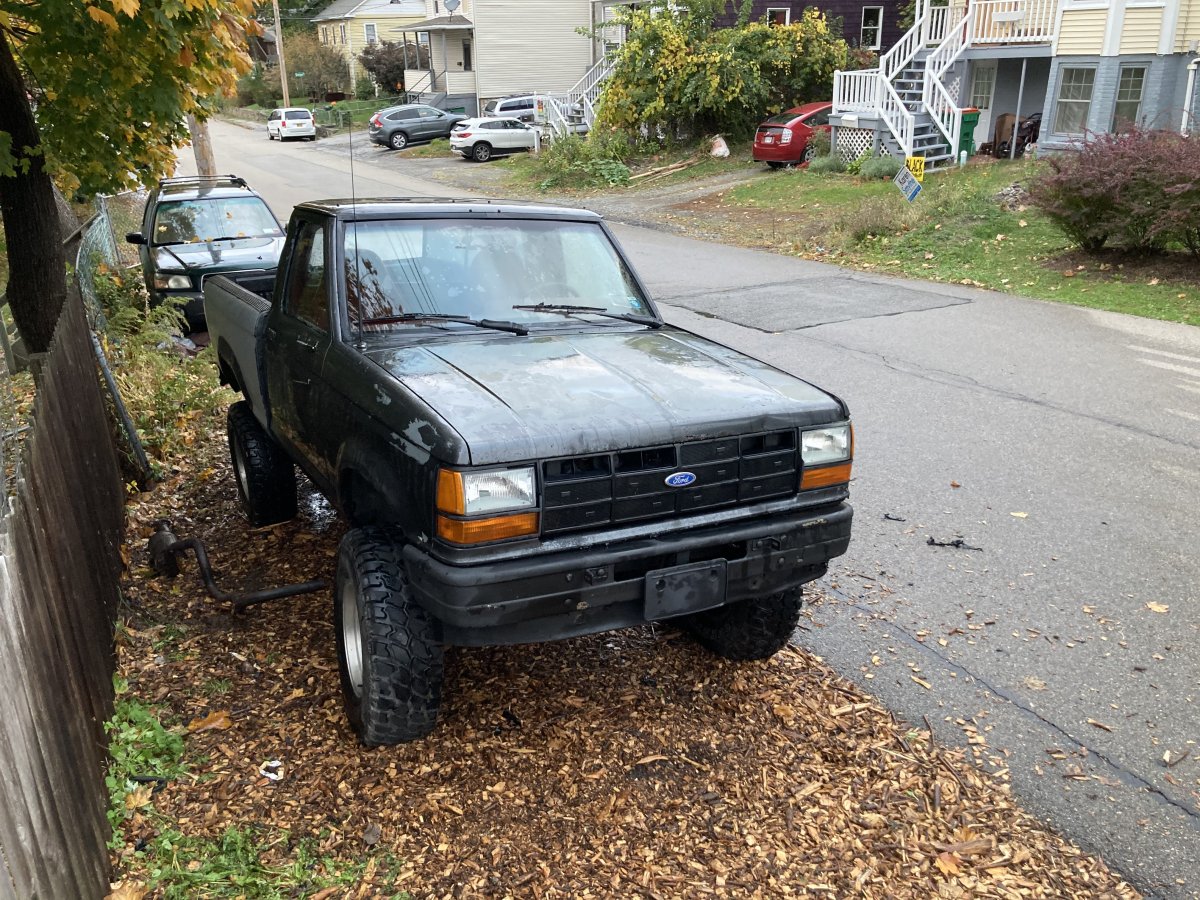 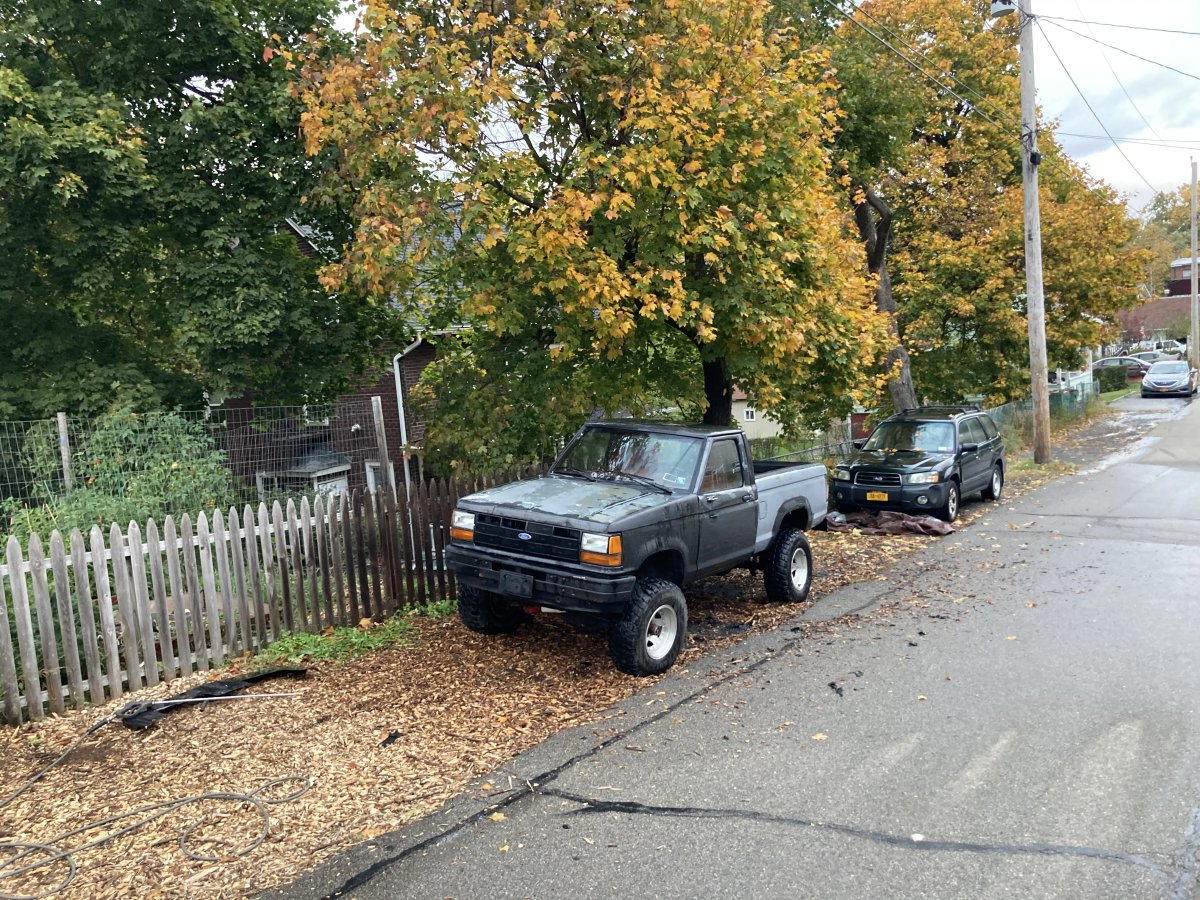 PetroleumJunkie412 said:
Mine was brush painted with rustled when I bought it.

Hooked my pressure washer up to my hot water tank and it came right off.


Easy way to test it is dump boiling water on a towel covering a section, wait a few seconds to allow it to warm up, and see if it scrapes off. Should make things easier.
Click to expand...

That’s an interesting option. The grey paint does come off at 3000 psi and reveals the same OEM paint, but very very slowly. I’d be there all day or more. It will be worth it to do it with pressure washing, not sanding, just to retain the OEM on bed. If I can get the grey off, I could keep it like this indefinitely and enjoy it despite all the patches of missing paint. Anything that defers immediate expense is a very good thing. I could ride it like this for a couple years.
I’ll try some hot water options. I suppose I could hook it up to a sink faucet with an adapter perhaps. I could also try letting towels of hot water rest on the paint for a few minutes first. Or both.

I made the decision to go hog wild with the pressure washer in the engine bay, but with a little prep just to make sure I sealed any vulnerable openings. I figured why not be aggressive and have a clean bay.
I only found one spot seemingly vulnerable and sealed it with some plastic wrap and rubber bands.
Trouble is, I discovered another spot after doing the washing.
Here is a very unflattering pic of the cleaner engine. It actually looks great during daytime.
The opening is circled.
Any thoughts about how much I trashed this component by getting some Super Clean and water spray in there? 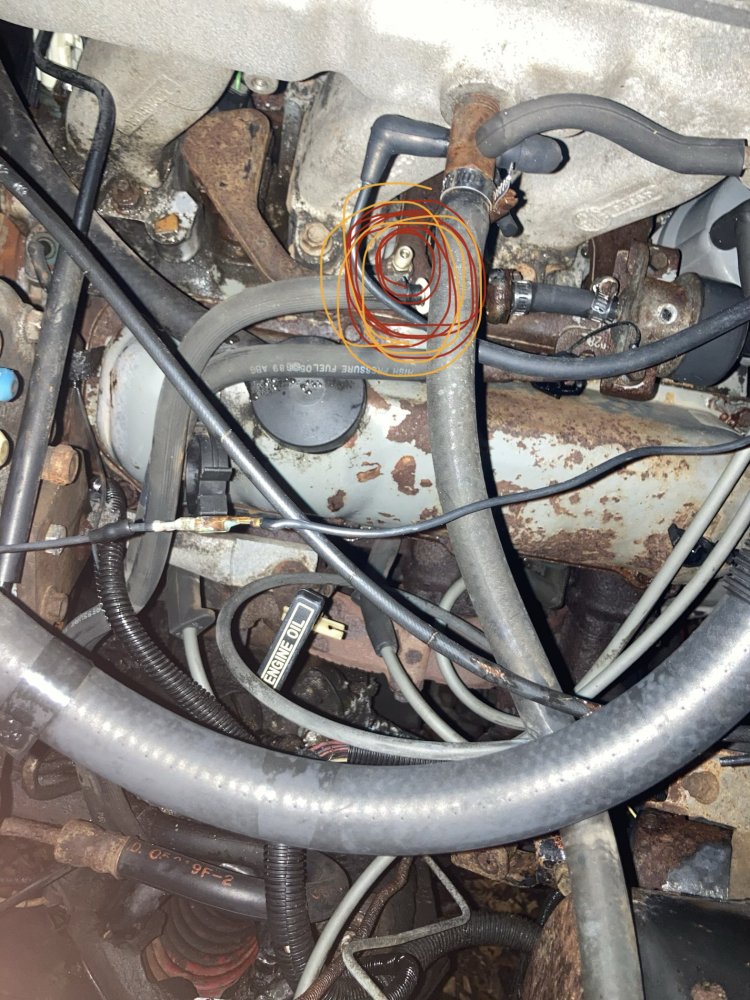 Depending on your taste. A flat paint job might be the way to go. Flat paint is very rattle can forgiving. Just pick the color of your choice after doing proper prep before hand and go to town.

Does anyone recognize those fender flares? I could use some.

SenorNoob said:
Does anyone recognize those fender flares? I could use some.
Click to expand...

You’re welcome to have these. I’ll be sticking with the regular body. I had to ruin a handful of screw holes in them by way of tunneling out the plastic just around the diameter of the screw with a plug cutter bit, but you easily could make those spots work by using black washers. Yes there are still like 3 or 4 screws stuck in the wheel wells of the truck, with a smidge of cut plastic around them.
They’re not in perfect condition obviously but they could certainly be used and made to look better than in pics with some tlc. Just send me a message. I’d rather see them used and currently they’re in the garbage bin for pickup on Friday.

One more thing I didn’t cover when washing.
Thoughts before I try running it? 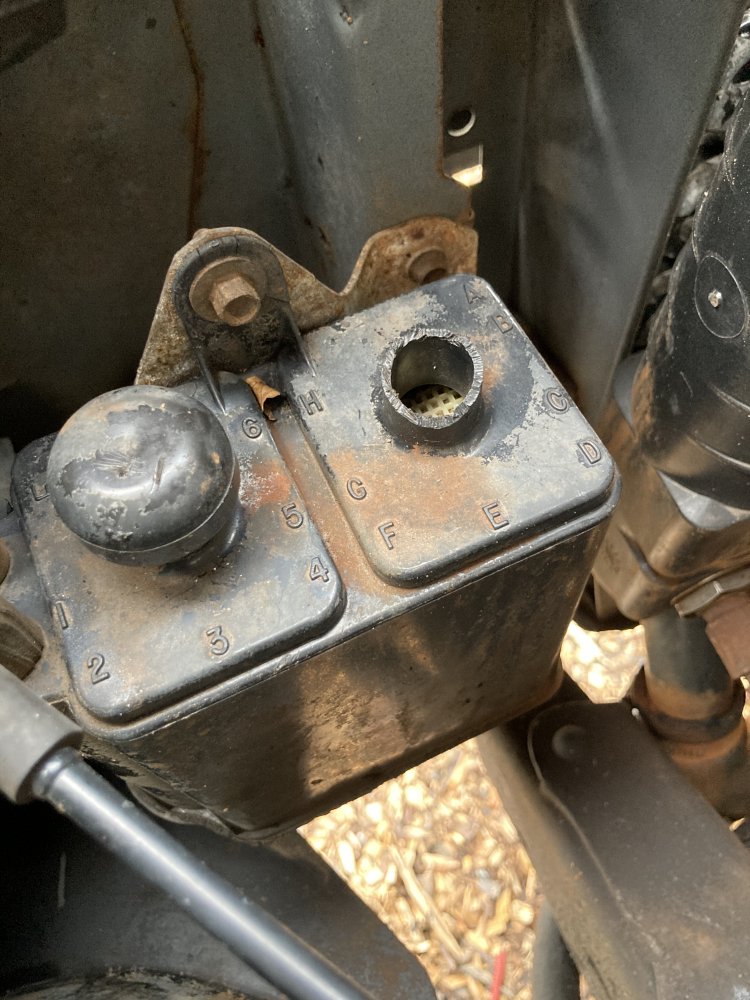 What is it? Charcoal canister?

sgtsandman said:
What is it? Charcoal canister?
Click to expand...

Vent cap is missing. Shouldn't affect anything in the near future, but I would replace it.

Vent cap is missing. Shouldn't affect anything in the near future, but I would replace it.
Click to expand...