Later rangers had a pressure switch on the pass seat. Some weight but too little, and it disables the airbag.

Fog light switch is part of the head light knob, you pull out the switch and it turns on the log lamps.

Not sure when, but probably 06 when they went to this style, but this is an 07 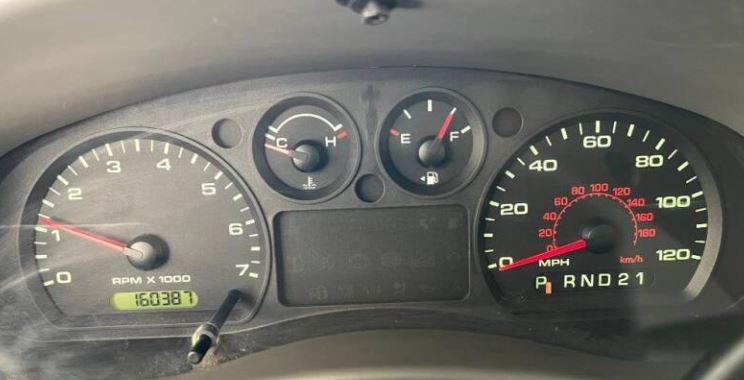 bummer I like to see it (oil pressure)
On my '99 at night the needles are orange (in daylight they are white) it's really cool. That tells you how much I drive at night... had the truck over a year and just discovered this...

anything particular about '07's that I'd want to know good/bad?

Since around 1980 Ford switched to an oil pressure switch, anything over like 5psi puts the gauge in the middle so having a gauge read one spot is extremely pointless, why they took so long to just make it a light is beyond me...

That's interesting. So this is another Mazda diff they kept it, not sure how long. Most stuff same Mazda/Ranger but good to know the differences.
You are telling me the gauge will either read zero or middle? kind of takes the fun out of it... oh well

How come the gauge is not responsive to changes in the oil pressure sensor. Because you're telling me it is a binary thing.
Last edited: Oct 2, 2022

It doesn't change because it is just a switch, once the oil pressure reaches I think it's 5 or 7psi it switches (don't remember if it's normally open or closed...) it just goes to the middle, you can make it read if you do some stuff but most Ford's don't have oil pressure problems... 5psi is too low at idle so you won't see it move other than engine on or off in normal conditions.

Oil pressure switch was ungrounded with key on, gauge at 0, after startup if oil pressure is over 5.5psi switch closes and Grounds the gauge, resistor inside the gauge puts needle in "normal" range when its grounded
So an ON/OFF setup
Any movement of that needle after startup is caused by electrical changes in the vehicle, so it can go up a bit with RPMs because Alternator may be generating 14volts at 1,500rpms instead of 13.5volt at idle, 700rpms

mine has that airbag light there, also, i beleive

James Morse said:
OK that answer it, and also tells me that is some pretty careless build practice to put this bezel when it cannot possibly be used on this model.
Can't think of what else you'd do with it since it doesn't look like you could easily make it to another 12v outlet.
Click to expand...

It's not so much careless build practice than it is a cost Saving measure for ford and the end consumer.

For example.. there's more than a couple extra bits of harness & unused connectors in my base model '21 because it's cheaper and easier to put the same wiring in all rangers rolling down rhe production line than it is to have to engineer and produce multiple different harnesses, and then make sure each truck gets the proper one.