I've used single handle steering brakes many times... but they push pull and have two masters... one for each wheel.

Nice work on the plumbing and exhaust.

That's going to be a "bump" in the hood

I've used single handle steering brakes many times... but they push pull and have two masters... one for each wheel.

Nice work on the plumbing and exhaust.
Click to expand...

in case it's not obvious, the hand brake will activate a second set of rear calipers that area independent from the oe calipers and factory parking brake.

That's going to be a "bump" in the hood
Click to expand...

It actually will clear the hood just fine. There's a picture of it in the bay in one of the earlier pages.

I'm considering doing a body drop on the cab, so I guess maybe after that it will stick through the hood. I don't know if the cab will get low enough for me. I have the frame ride height set for optimal suspension geometry. I have poly cab mounts ordered and when they get here I'll put the cab on and see.

If I do a body drop it will definitely be a traditional drop, or a channel. I'm not cutting the frame up for a stock floor drop. We will see when the mounts get here.

Would anyone be able to do me a favor and measure their truck? I'm curious how far the frame sits below the rockers. I forgot to measure that before pulling the body

I made the brackets to secure the radiator lines to the frame. I was putting it off and finally got it done. I also shortened the height of the tubes coming out of the bed. I was planning on putting the radiator across the down tubes of the cage but I think I'm going to lay it flat across the rear end instead. 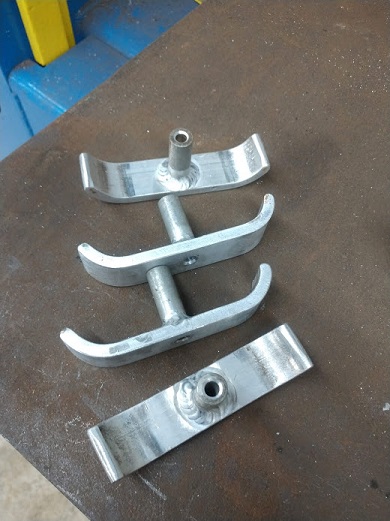 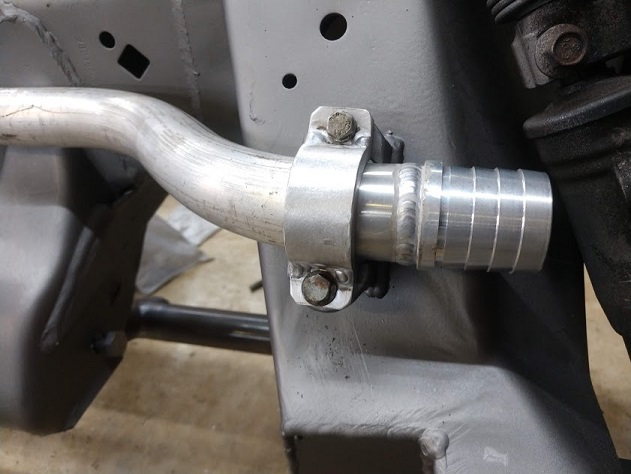 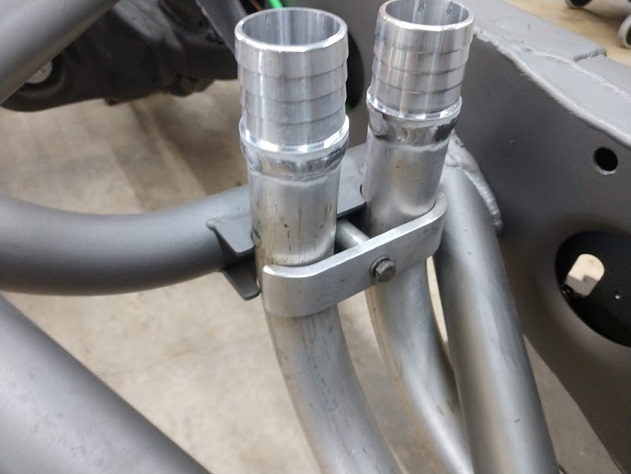 I spent most of the they modifying the tranny crossmember. I wasn't planning on doing this at all. I started installing the main brake line down the driver side frame rail and ran in to an issue where the tranny crossmember bolts were going to be pushing against the brake line. That's no bueno. I'm not really thrilled how it turned out, but it's fine for now, and when I put a t56 or gforce in it later I can remake it to look better. Remaking it does help me out in other ways though. It gives me a lot more clearance to run the exhaust, which was shaping up to be pretty difficult. It also lets me service the radiator tubes without having to pull the crossmember. That's good, I guess. 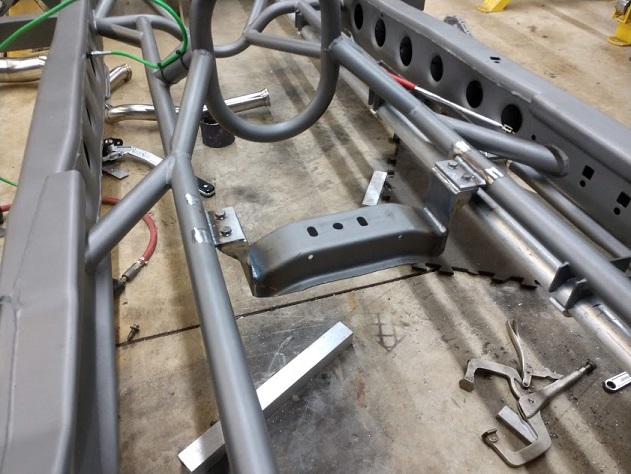 That's quite lot of really impressive fabrication. WOW! Being watching this to see the finished product for certain. Maybe, if the turbo sticks though the hood, you can obtain a Boss429 hood scoop from Cervinni's. It's a very well made, stout scoop. Not flimsy in the slightest. Pic of one on my Mustang below.

I have a Mustang scoop on my Ranger, though not the Boss 429 style. It's functional. Yeah, need to paint the hood again. Waiting for it to get warm again and a no wind day. The bra is no longer on the truck.

Here's a link to that hood scoop, it's kind of hard to find on their site.

That's a pretty massive scoop! It's a little overstated for my tastes though. I would rather trim the hood to fit around the turbo, add some rubber trim, and call it good.

I am really tired of working on this frame. I'm ready to move on and start working on getting this thing actually put back together...... Anyway I had to delete the spring buckets. I was mocking up the lower control arms and wheels and found they have some heavy interference with where the tires need to be. By shaving the spring buckets I get 4 inches of clearance per side. Here's how that went down: Unrelated, but I wasn't really thrilled about the idea of using silicone couplers for all the SHO connections, so I ordered a bunch of aluminum v-bands and cut them in to the intake manifold. They're all o-ring sealed, so no worries about it leaking. It was a bunch of lathe work to get them down to size, but in the end it came out nice. I'm going to have to re-paint the manifold but I think I'm going to also get it sent out for extrude honing. I also still have to machine the variable runners for the larger butterflies. Last little bit of work for a while, as my traveling work season is kicking off. I finally got the cab back on the frame, for the time being. It will come off once more too do a final clean up on frame, mount the front a-arms and shocks, and undercoat the bottom of the cab.

I ordered a set of energy suspension cab bushings. I stupidly tossed the stock bushings. Well the truck sat too high for my tastes. I'm not looking to lay frame or slam it, but it didn't look muscley enough. I'm going to have to mod the spindles, but I'm going to lower the frame 1.75" below where I originally was planning on having it. I also machined solid cab mounts out of delrin that drop the cab on the body by another inch. The body needs a little clearanceing underneath for the 1" cab drop, but not a lot. Very very minor compared to a body drop.

The attached pictures are before the cab drop. I'm still waiting for the wheels to come in..... I ended up ordering rpf1's. 18x10.5 et15. I think I'm going to have them painted white. That usually looks good with a green body. The wheel in the picture is set at the expected track width. It looks like I'll be making wide body fenders after all.

I'm about to start doing this exact swap on my ranger. Took so long to find anything about this swap I almost gave up. Found a forum and 3.2 in the same day lol.

I remember when ... I think

...sts defiance did this...they made a spacer to keep the engine forward.. It was a tuned oem application. Very kewl back then. Hell ..it will always be kewl....it's a Yamaha modified engine for Pete's sake.

So drivetrain upgrades are always in play past a certain power point when wanting to drift.

Though....there is no way I would do one of these Yamahas over a cyclone.

The current 3.5/3.7 crop is a wicked animal if one wants to go this route.

Stock with some careful tune they can put out 300 hp/tq ... That is a good start. Plus everything is available for cheap because there is a million of them.

They are built for boost...so running an Eaton or turbos makes ridiculous power....reliable power.

And now the current ranger powertrain is available cheap enough to have on my list.....and they make incredible power for a gen 1 application. The manuals for the broncos are coming online too.

They will never be as cool as a Yamaha swap though. But easy is not the same as rare.

I am going to have him look at this thread....

I looked at some mustang 3.7 pull outs with full rear and front suspension on a crate that were really cheap.

Hey that's cool. I built a twin turbo setup for a 370z last fall. They're a really strong platform for drifting. Not my cup of tea for styling though.

I wouldn't mess with the new sho motors. They're strong, sure, but they don't have the heritage or uniqueness of the old sho.

I have been looking at swapping a mustang front kframe to the truck. That would be the easy-button for sure but not exactly what I want. When I get a chance to work on the truck again I'm going to cut out the front crossmember and build my own. I need to move the steering rack location and lower control arm pickup points to hit the ride height I want and that seems the best way to do it.

This build got away from me. It's 10x more involved than I originally have planned. I have learned a few things about it, though so have some free advice before you make the same mistakes I did:

Don't do the IRS swap until you have the motor running. It's going to cause a spiraling effect of "while you're in there". The track width is also way wider than the ranger beam so you'll have to either switch to a fiberglass offroad fenders, build a wide-body kit, or make a custom full-sized width bed with step side sides for the "dually" flared rear look.

Keep the radiator up front if you can. You can do it easier than I have with the hard lines but I still would keep it up front for simplicity. I relocated for weight and because I have something special planned for the front of the truck.

don't use the 3.2. Find a 3.0. The 3.0 and 3.2 don't share any parts except the heads. Even the accessory drive doesn't have any cross compatibility. There are plenty of 3.0 parts but very VERY few 3.2 parts still in production.

Don't make custom headers, make custom steering linkage instead. You'll probably want to switch from a ranger column to an aftermarket column with a QR wheel down the road, so might as well drop a $200 column in early and make the linkage work around the headers than vis-versa.