Based on this, my understanding is:


(1) You can't put a 4R44E in a truck that originally had a 5R44E because the ECU will be looking for input from that sensor.

(2) You can, however put the 5R44E into a truck that originally had a 4R44E (my situation) and just not connect the speed sensor on the transmission.


Again, this is my understanding based on what I've read, so any thoughts from anyone who has done it would be much appreciated.

Your research is correct, good work


The 16 pin plug-in is the same, you may need to swap over your DTR sensor to the replacement trans to match the plug, not sure if this connector changed over the years

I would use a new torque converter
And it is usually recommended when transmission is off ANY engine to replace the rear main seal, a cheap part but hard to get at if it leaks

Very much appreciated. I think that most of the info that I read online was stuff that you had posted.


Do you have any thoughts as to why when you look for these on Hollander Parts or Car-Part.com they give you two options for transmissions for 3.0l 2wd ?

Do you know what the difference is between the 1L5P-AA and the 2L5P-AB? 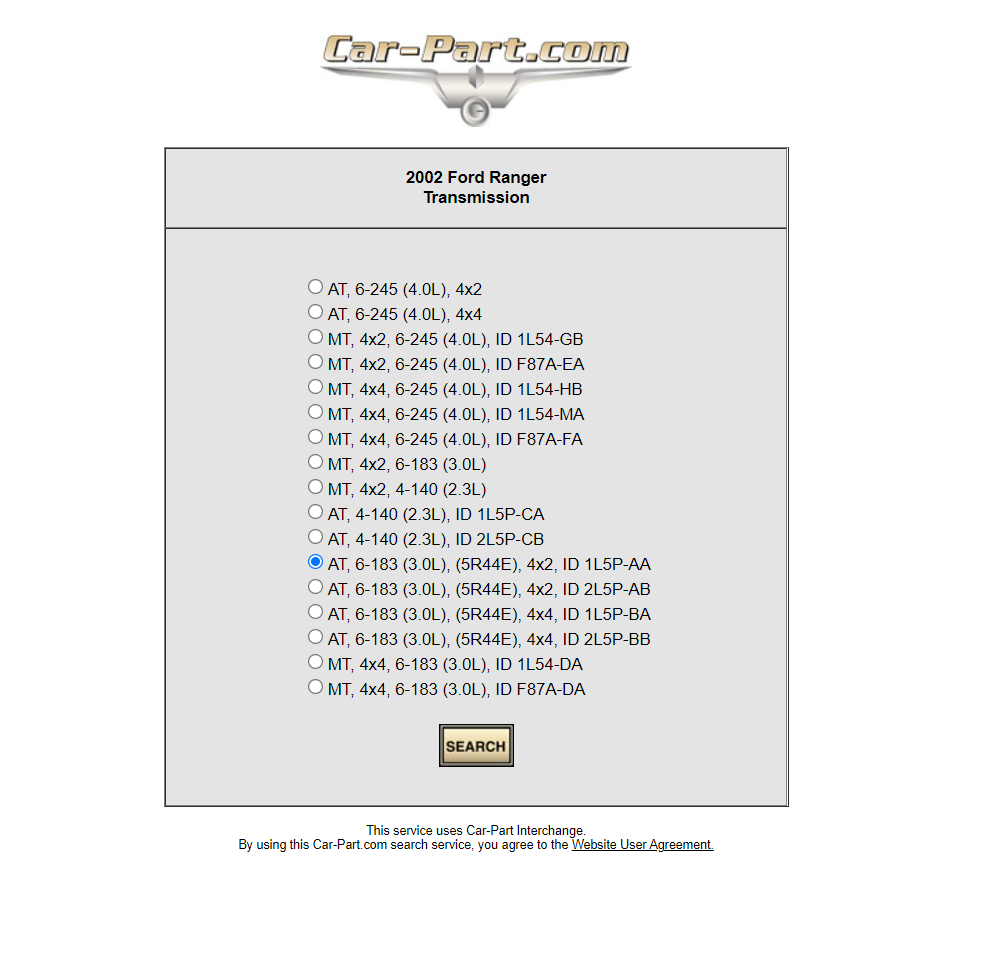 No, not sure why the difference, only Ford would know specifically
But not really important unless you will be rebuilding the transmission

So doesn't really matter to your swap, Ranger/B3000 3.0l 2WD Automatic is what you need

2L5P might be found in a 2008 Ranger if there were no major changes in this part thru 2008, so its the year of the design only, the first year the part was in production, not the only year it was used


So evidently there was enough of a change between 2001 and 2002 to update the part number's year, this was most likely an internal change, so when ordering rebuild parts you would use the 2L5P number if that is whats on the transmission


The last two digits, suffix, are revisions, so not major change just updates, usually first model is AA, then update AB, then AC, ect
But to recognize earlier updates to earlier part numbers of the same basic part, it could start at CA, then CB, can even skip to CD
But a Suffix can also be specific, i.e. left or right mirror will have same part number but A is right side and B is left side or visa versa
Again, when ordering internal replacement parts also using the suffix can matter
Ford has a record of what all this means but they do not share it, lol

Thanks Ron,
This helps out a lot. I think that I have located a suitable transmission and will most likely give it a go.

Do you know why the torque converter part numbers shown on rock auto and advance auto parts are different for 1999 and 2008 3.0l rangers?

All of the other specs look the same.

The part numbers for the flexplates are the same.


I'm thinking that because the supposed difference is on the engine side, I should get the converter for a 1999. Do you have any thoughts on this?

I don't but someone else might know about a difference

As Ron had mentioned the newer trans has two sensors that are left disconnected and everything else bolted up well, but I am having issues with the truck going into limp mode after a few miles of driving.

I have access to SCTs tuning software for my truck and I know that the issue is when the converter goes into lockup because the problem goes away when I set the minimum converter lockup speed to 120 mph.

I pull a P0741 code consistently when I allow the converter (new from Advance Auto) to lock up above the stock 20mph setting.

I believe that the ECU is looking for a 1:1 match in RPM between the engine tach and the turbine shaft sensor on the transmission.

The TSS output should go to the same pins on the plug for both transmissions, correct?

No other sensors are used to determine lockup besides the TSS and engine tach, correct?


I know that it could be the solenoid (it ohmed out OK) or a bad converter or a passage in the valve body, but I just wanted to see if anyone had any thoughts on if it could just be a difference in sensors between the two transmissions and if it could maybe be fixed in the programming. I have access to quite a few transmission parameters in the tuning software.

I'd like to get this working but even with lockup disabled, the truck shifts better than it has in a long while.

Thanks in advance
Chris

Yes, as far as I know tach signal and TSS RPMs matching shows "Lockup is set"

So if I am understanding correctly you can get lockup by changing the computer settings, so solenoid can work
But no lockup with original settings

I can get the truck to not go into limp mode, and not throw any codes by essentially telling the torque converter to never lock. The truck runs fairly well like this.

When I allow the normal lockup to happen, I can run for a while (about 5 miles) until the OD light starts flashing. If I scan for codes I get the P0741.

The Powertrain Control Module (PCM) will set the P0741 diagnostic trouble code when it notices a difference between the rotational speed of the torque converter and the transmission input shaft that is greater than 200 revolutions per minute (RPM).

That would suggest your torque converter isn't locking up, or you are getting a different pulse count from the newer transmission. Does SCT software allow you to read both tach and TSS rpms?

So before the 5 miles you can "feel" that the torque converter is locked up?

And is this happens cold or warm, i.e. after you clear the code and drive it 5 miles again with trans warm, the same thing happens?

Just trying to see if torque converter is ever locking up, and the 5 miles is just the time it takes the computer to confirm it is not locking up, that type of code won't be instant

The logging software will allow you to monitor the tach and the TSS output. I haven't hooked the laptop up yet but may try doing it this weekend.

I don't think that it does it cold. My understanding is that the TCC solenoid is not actuated until the transmission reaches a set temp. It seems to happen more at freeway speeds in 3rd and 4th when I am cruising at constant speed. I can see a difference in RPM for a given speed with the TCC turned off in the code as opposed to on before it faults out.

I tried something last night in the code. I increased the PWM duty cycle to the converter clutch solenoid and it did not give me the error for a pretty long drive. Based on this, I'm not thinking that it is a not a sensor mismatch but maybe the circuit is not getting enough pressure to prevent slipping.

The plan is that I will drop the pan and swap out the TCC solenoid this weekend. The old one ohmed out OK through the plug but who knows maybe its an intermittent temperature related thing. If the swap doesn't fix it outright, I'm going to adjust the PWM table for the solenoid until it goes away. I was thinking that possibly there are some internal differences between the two transmissions and the valve bodies are different part numbers, so maybe there is no reason to think that the stock PWM table for the 2008 was the same as the one for 1999.

Ron, please correct me if I'm wrong about any of this. I didn't fully understand the part about the converter locking without the solenoid. Based on this, shouldn't it be locked at 60-70 mph where the error usually occurs?

Thanks for the posts

It should be locked above 40mph for sure, all torque converters have a "stall speed" were they lock up
TCC was added to lower the lockup point based on other factors not just RPM, because the sooner it locks up the better the MPG
Automatics have lower MPG vs manuals because of the torque converter slipping, also more rotating weight/resistance, lol
You must log in or register to reply here.
Share:
Facebook Twitter Reddit Pinterest Tumblr WhatsApp Email Link