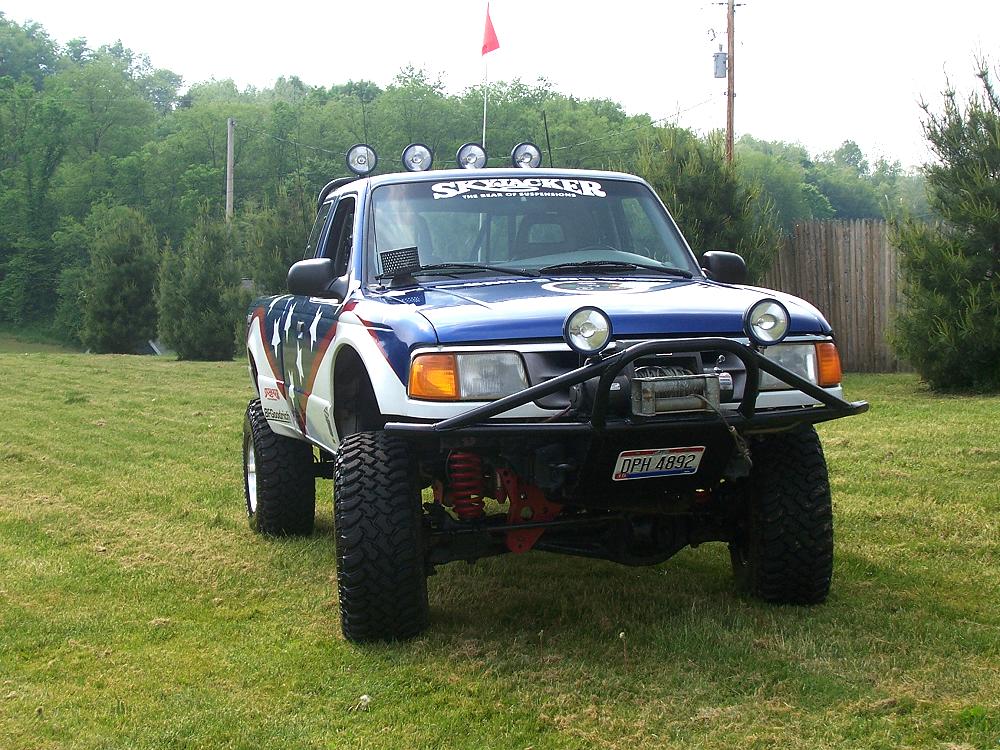 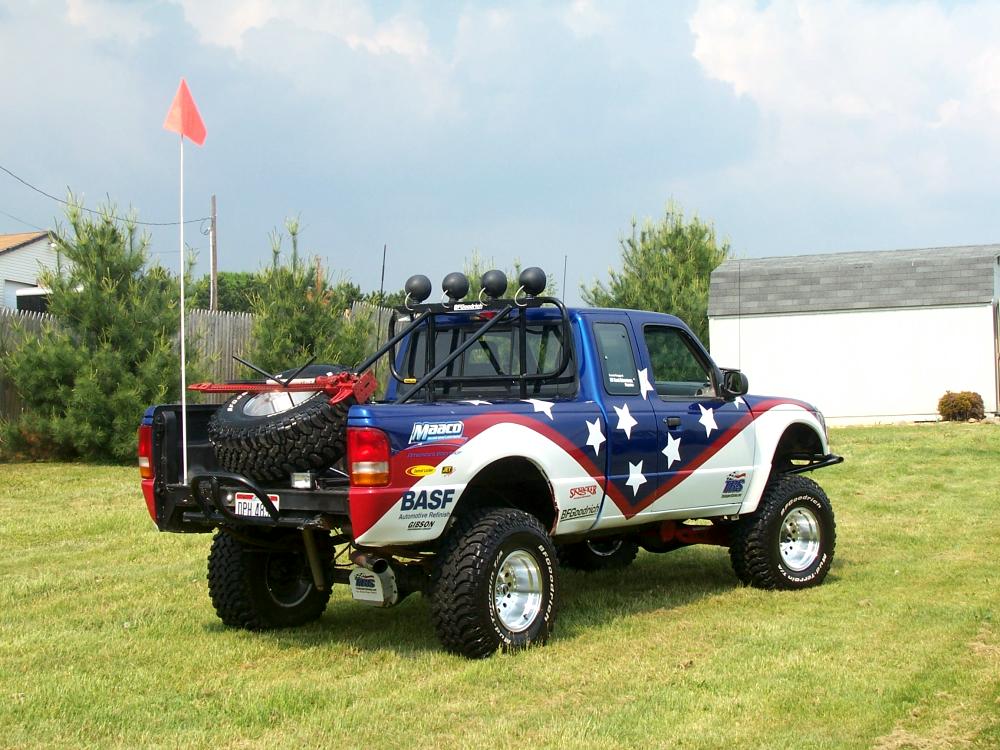 The front bumper and bed cage was built by me, and I had a Warn XD9000i winch on the front bumper. All of the lights are 130 Watt units from ProComp.

The truck was painted by forum member Randy Miller, who managed a Maaco down near Columbus Ohio.

After enough trail damage, I finally repainted the truck. 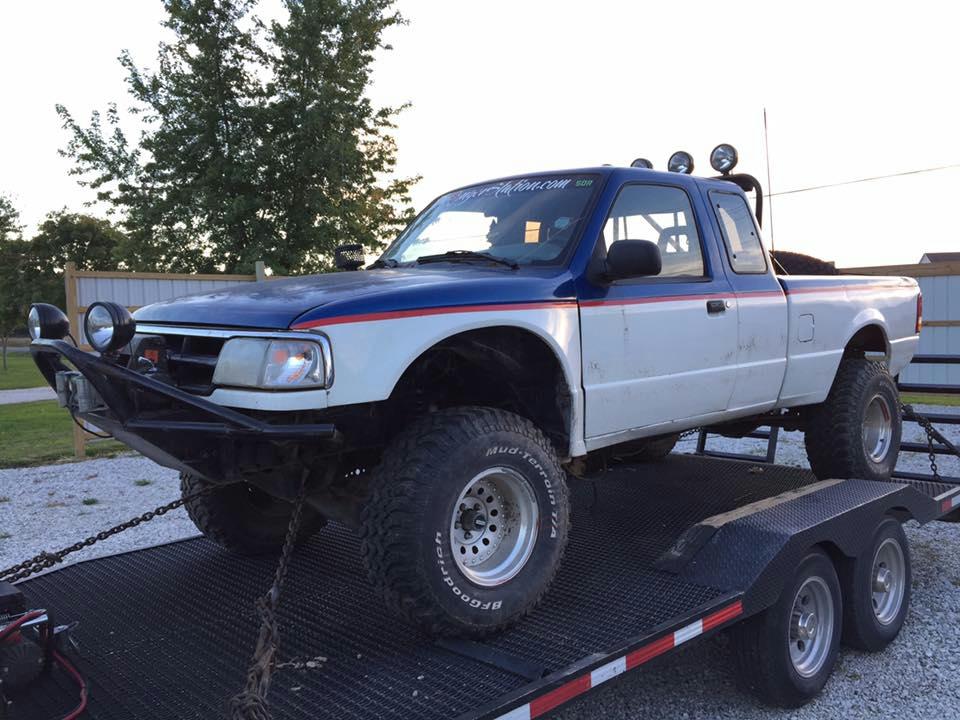 I sold the Ranger around 2014/2015. This past October the Ranger showed up for sale on Facebook Marketplace. The truck was in Indiana, so Will went, checked it out, and paid the seller. I sent Will the money once I knew what he paid.

Bobby Walter took a dolly and hauled the Ranger back to a house he's renting in Ohio, and put it in the garage there. 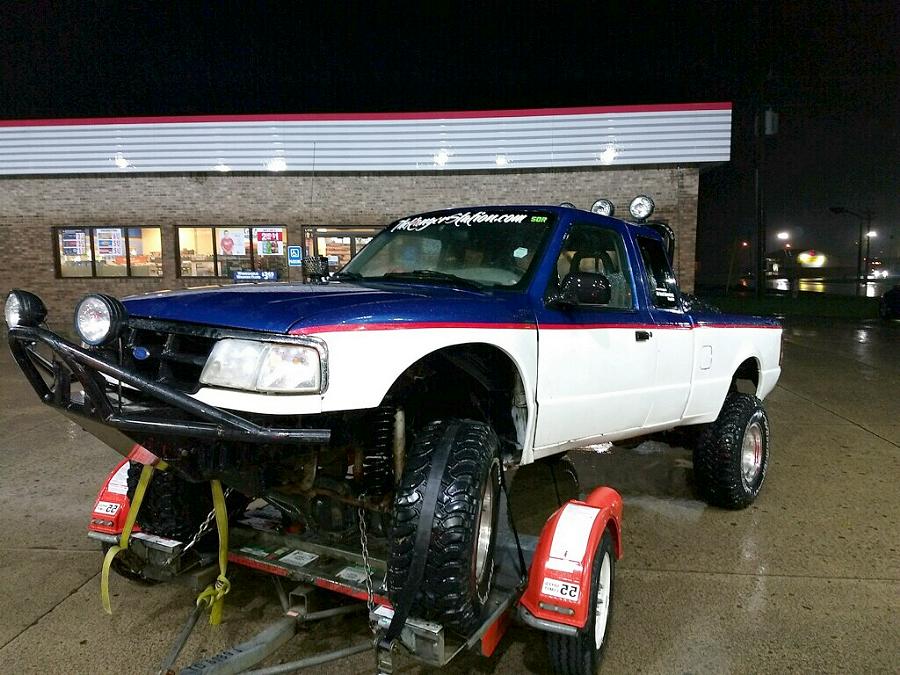 Bobbywalter towed the Ranger back to his garage in Ohio. He was determined to get the truck running and see what we were working with. 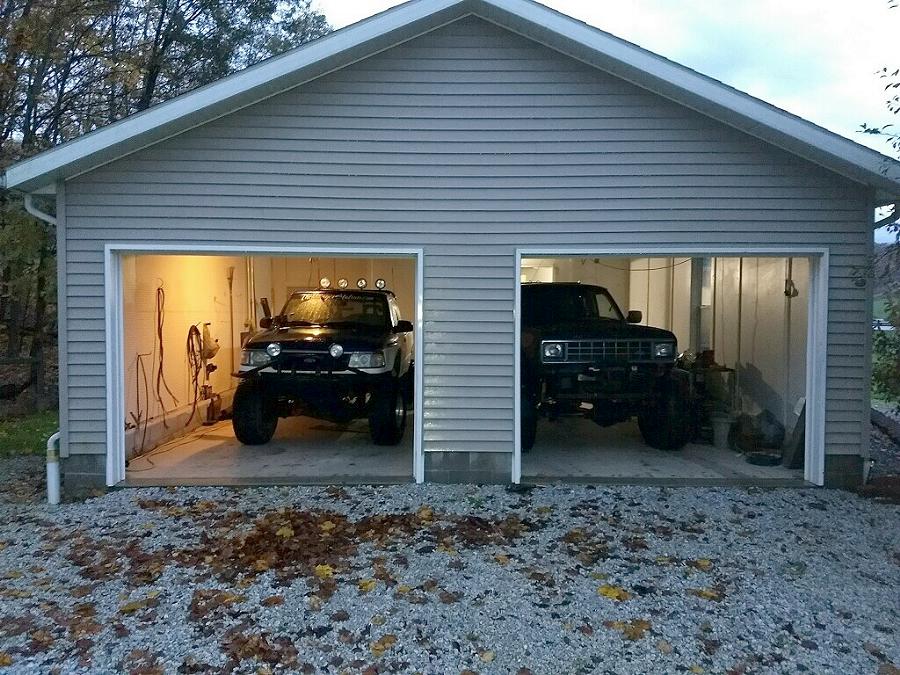 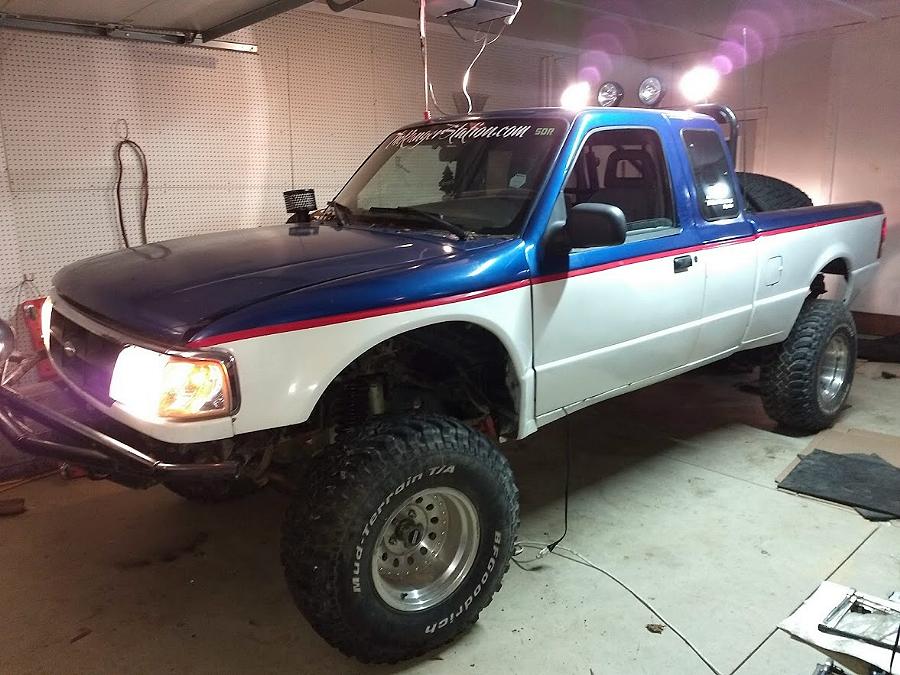 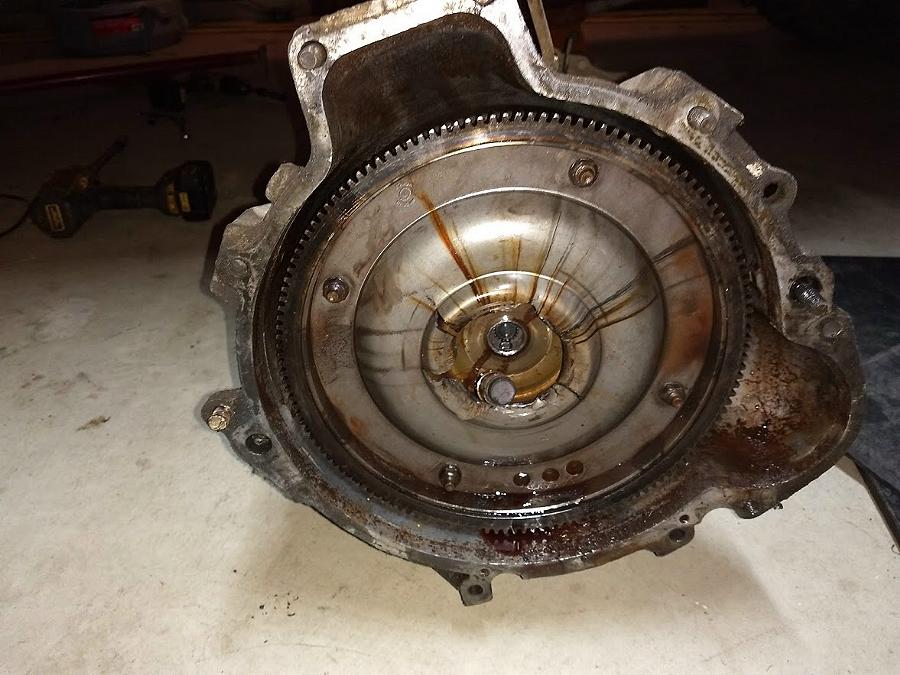 Above you can see where the flywheel is still attached the transmission, and the center is busted out. The seller failed to mention that. 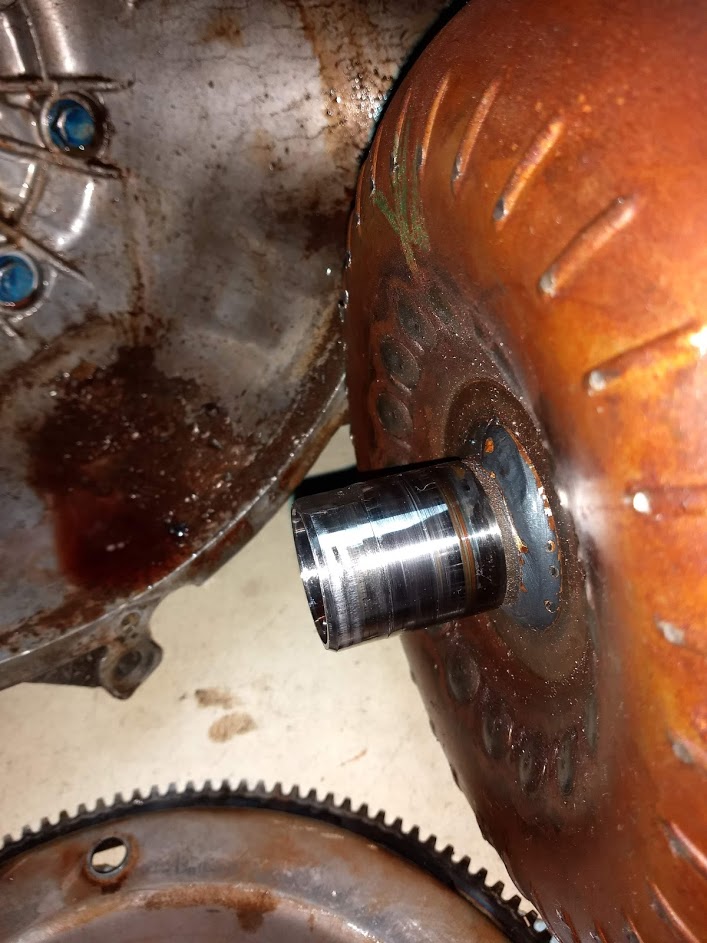 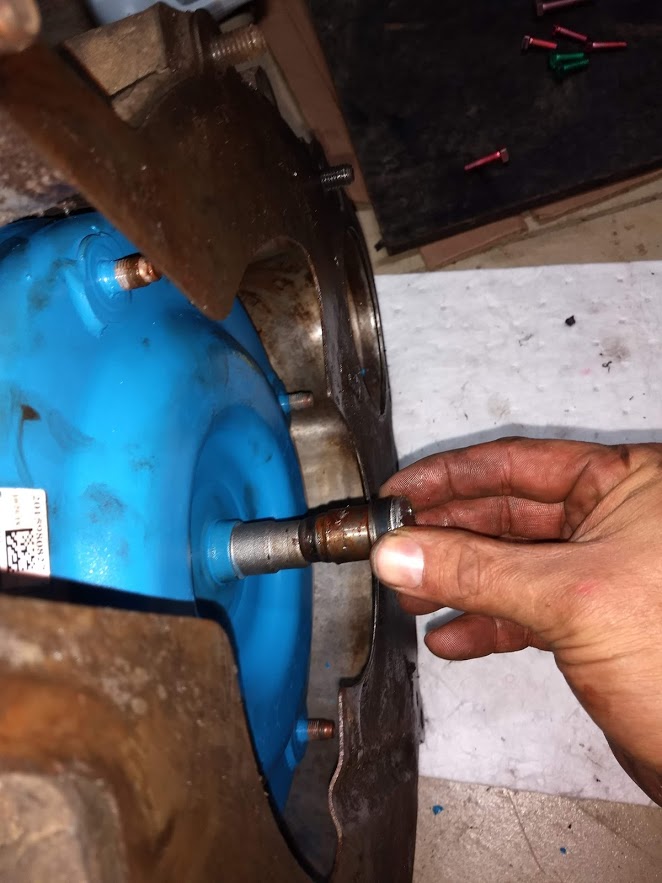 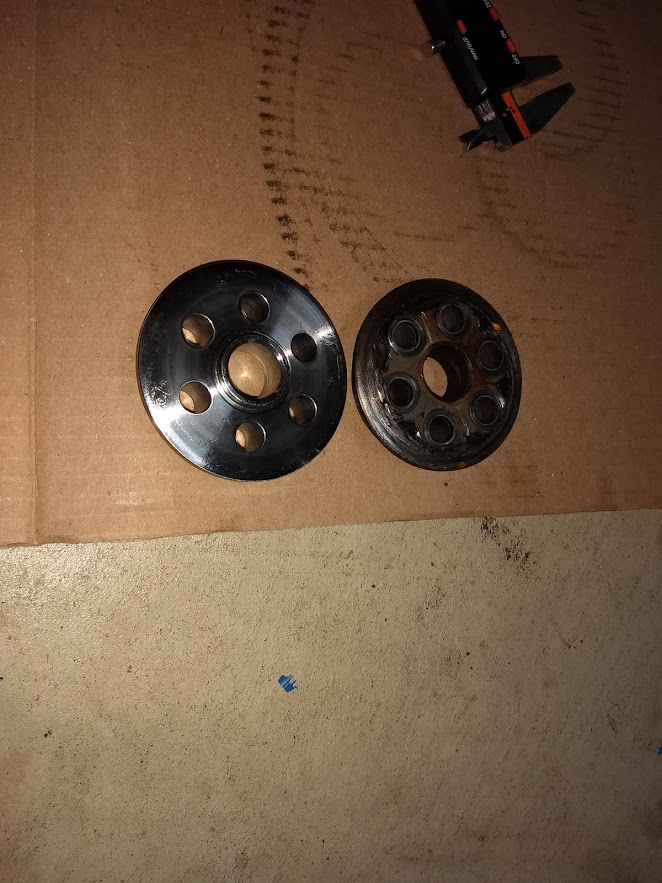 Bobby had to purchase a new flywheel, torque convertor, and crankshaft / flexplate spacer. 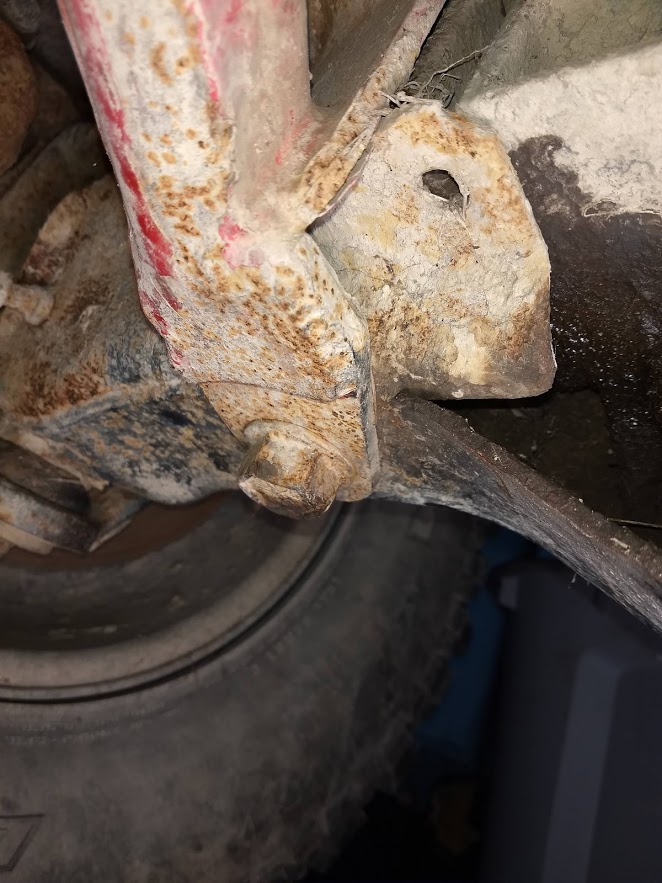 The drivers side axle beam is tweaked and cracked.

What We Know So Far:

So far we know that:

The goal is to get the truck running good, and then tear it completely apart, clean and inspect everything, repair or replace parts as necessary, repaint pieces, and put it all back together.

The truck will get a new patriotic paint scheme when it's done. Something pretty close to it's original paint job:

Thanks For The Support:

This is going to be a big project. My goal is to get it done so I can celebrated the 20th anniversary of TheRangerStation.com wheeling with people next summer. Hopefully I'll get some people to help along the way to speed it up.

I've been asked about this before, so I'm just going to mention it. Anyone that wants to contribute $$ towards some of the things that we're going to have to replace can do so buy purchasing one of the 20th Anniversary Banners to go under your name. You can find out more about that here:

I also appreciate your interest in this truck, and words of support.

I wish I had Bobbys rental garage...

Seemed like the previous owner dogged the crap out of it. Glad to see it is back into good hands.

She needs a lot of TLC. Lots of wrenching, cleaning with a grinder and wire wheel, and some salvage yard scavenging.

Glad everything finally worked out......

I'll have a set of ranger seats for sale soon. I also have a couple pairs of leather explorer buckets I can get. I'm glad you got it back.

Sent from my SM-G930T using Tapatalk

Leather buckets would be awesome!

I have some explorer buckets you can have. I don't think the tracks will work though. I will gladly donate them.
Edit: tried to add a pic but no luck.
Last edited: Nov 22, 2018

I have a set of brown leather explorer seats you can have. Not perfect, but they're free for this project.

How are the hubs?

Let us know when you want a wrenching weekend.

Glad to see you got your truck back

Really happy for you Jim. This truck is going to get the love it deserves once again.

i got the transfer case shifting right before i left for detroit for a few days off for turkey....we got lucky to get days off as that is not typical...but also screwed on pay.

i did a hard reset with a forced run...its risky but i got away with it. the system from my bronco is laying on the ground in my garage back in detroit so i wasnt too concerned.

the transmission...well on a good day rolling off the assembly line brand new it was a steaming pile of craptastic bad ideas and dead horse beating....

it is what it is with these turds.

i will figure out the best cost effective formula and pow wow perceived options and try to get it executed.

suspected a journal bearing in the engine...but the trans was slightly overfilled for the testing.

this slight overfill could possibly be part of the shifting issue in reverse and engine noise i thought i was hearing. but not likely

i probably should have went thru the pump, put a fresh bushing in and did a shift correction ect before i put it back together...but i only had 5-7 hrs to work with so i rolled the dice on it...kind of big detour to go through da burgh and then my place in ohio to get home...altogether 10 extra hrs of driving due to the trans supply mix up/wrong parts.

but it runs and moves so thats something. engine runs...trans shifts...t case functions.


the rest of the story is typical as well with full lockers...


front axle intermediate shaft is stretched, passenger side lockout is destroyed, drivers side axleshaft is destroyed. drivers beam is tweaked but workable....k member is tweaked and bolts slopped..

i janked those d35 beams up all the time and twisted up my long arms...minimal beefing usually solves it. even know its beat...its in better shape then 99 percent of the stuff available in the junkyards i shop at back in detroit. shit just dont exist anymore that is easily usable for dana 35.

this is the reason i pulled my quick lock out after a minimal time with it installed. if you used the power i had with my various v8's it would mangle a d35..... everything on the d35. this truck has a 4.0 with less then half the power and a young driver having fun is all it takes to destroy these in short order with a locker in it....

it is why i consider brake bias or selectable locker as the only way to go...especially if this thing ends up with power.. if you want to play hard....
with jim though...or anybody with common sense that drives to survive, you can get away with it.

be interesting to see spline condition.


did not get too deep in the rear axle side of things... but joints and drive-shaft are ok.
locker seems to be stuck engaged. did not notice and serious leaks.


radiator is showing some age but look ok.

i probably have enough parts to fix everything....finding them...between northern mi and detroit will be careful trip planning.

..thats a whole different problem. 100 dollars in fuel just to go look and 6-7 hrs of driving. if the shit aint there i wont be happy to say the least.