8thTon said:
Lol, you're quite the fanboy for Stihl....It ran and cuts wood, but there is nothing impressive about it.
Click to expand...

Well yeah i'm a fanboy of a product that doesn't give me grief, wouldn't anyone be one? Nothing more frustrating than trying to start a chainsaw that wont start or the gas cap is so tight that you need a tool to open it or chains popping off. I don't have those issues. Not a single one.

91stranger said:
Well yeah i'm a fanboy of a product that doesn't give me grief, wouldn't anyone be one? Nothing more frustrating than trying to start a chainsaw that wont start or the gas cap is so tight that you need a tool to open it or chains popping off. I don't have those issues. Not a single one.
Click to expand...

Keep whistling past the graveyard. It’s got a ZAMA C1 carb, they all get leaky check valves after a while. But don’t worry, you can buy a new Chinese carb off eBay for a couple of $. I put one on my dad’s Stihl and now it works fine again.

Lol, they’re all the same, though Walbro carbs are more reliable in my experience.

My 30+ year old Echo 302s 16" is still running great, the POS Poulan "Pro" 16" I had lasted a couple years of light use, it finally quit one day and never got it to start again, they're cheap throw away saws. I don't use a chainsaw often enough anymore to warrant the ridiculous price that you have to pay to buy one that will last longer than a couple years if you are lucky...so I bought the Dewalt 60V 16" chainsaw when I was finishing up a tree removal in the yard last year. Took a while of waiting for battery charging cycles but the old Walnut tree came down with a cordless chainsaw and got cut up into rounds with the same saw too. That was a lot of heavy cutting, the saw did great, although I need a new chain now, but it did the job and now I have 2 batteries so in heavy cutting like that I can run about 45 minutes between the 2 batteries...just doing some light cutting and pruning, it'll run for about 45 minutes on one battery as opposed to the 45 minutes I was getting between 2 batteries with all the heavy cutting I had to do on another tree.

I'm not saying gas saws aren't great, but if you only use it once or twice a year chances are it may not run right or at all when you go to use it. So consider that when buying a saw, how often do you use it? What fuel are you running, is it worth the money to buy that fancy expensive saw, or just borrow one or buy electric or gas. I was looking at the MS250 but for $350 I can wait for a battery to charge and not have to deal with fuel issues due to the saw sitting for long periods of time, I may use a saw once or twice a year at the most now so I don't want to go down the gas saw road again with a tool that don't get used often. Sure the Dewalt saw wasn't cheap but all I have to supply with it is bar oil and chains, and charged batteries LOL. I'm running out of trees to cut down on the property so I don't use a saw very often and that cordless saw is just so handy to throw a battery in and bar oil and pull the trigger.

I don’t use my saw often but when I do, it’s all day. Then a heating pad and aspirin for the next 3.

91stranger said:
I have that same craftsman 55cc chainsaw and it sucks.... Doesn't run worth a crap even with new carb and fuel lines. I gave up on that POS. The "incredi-pull" will fawk your arm up if you aren't ready for the weird spring they use....
Click to expand...

Somehow I don’t think we are talking about the same saws... have to grab a pic of mine, maybe tomorrow. 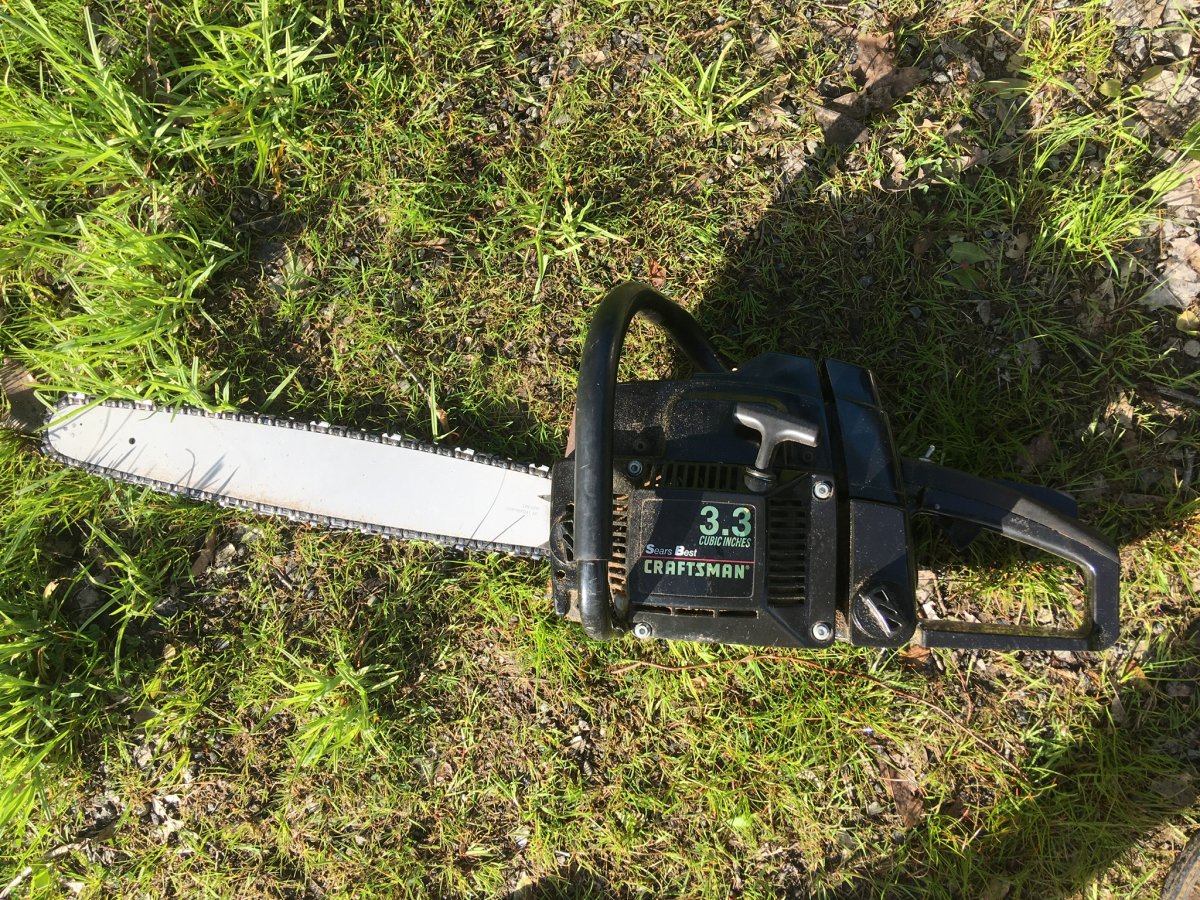 It depends on the Craftsman model with that engine. Some were good and some were crap. I think the problems started coming about when they started putting “save the planet” stuff on them.

sgtsandman said:
It depends on the Craftsman model with that engine. Some were good and some were crap. I think the problems started coming about when they started putting “save the planet” stuff on them.
Click to expand...

Mine is Model 358.356332 and there’s nothing about saving the planet anywhere on it. The bar did say Oregon, but that is long gone, lol

Back when I was moon lighting at Sears in their lawn and garden section. There were a few models that had a reputation for issues. Usually one of “latest and greatest” were the culprits. That was about 10 years ago now. Back when it was obvious the Sears was in trouble but no one wanted to admit anything.

That’s an older Poulan, alloy case construction. Good saw just lacks a chain brake. Nothing to do with that 55cc MTD.

I want to say that saw was new sometime in the 90s. Dad retired it when the bar needed replaced and Sears told him it would be $120 for a new bar and chain. He had bought the saw on sale for like $135, so he threw it on a shelf in the shed and it sat there for probably 10 years before I figured out that a bar and chain from a Poulan would work. I don’t mind the lack of a chain brake at all. Only real problem it gave me was the fuel lines rotting out. I have a spare carb for it. Probably should get some other spare parts

Yeah that's a different craftsman than the one I have. The one I have looks like it would be a good saw with the over-sized bumper spikes but it just doesn't like to run good... It runs but just doesn't have the power that it should. I need to get the new jug and piston into the old Husqvarna 55 I got to see how it compares. Seems people are either stihl-only, Husqvarna-only or whatever runs type of folks....

I've looked into the battery saws and just can't pull the trigger.... Price seems way to high for something with a 14-16 bar..... If I did buy a battery one it would have to be a Milwaukee brushless. We've all seen the viedo where it beats a gas saw but we don't know the full details of both saws. Do they both have new chains? sharpened chains? I think a Sawzall could cut faster than a chainsaw with a dull chain so it wouldn't be a fair fight unless they had similar chains IMO.

The Milwaukee saw is pretty cool and people seem to like it. I would buy one if it wasn't so big - why they did not start with a top handle model is beyond me... DeWalt and Makita both have top handle saws that are very compact. The ideal battery powered saw for me would be a top handle Milwaukee with about a 12" bar. Perfect to throw in the tool box, cut up campfire wood, limbing or clearing fallen trees from the trail. The current Milwaukee saw is just too big for that purpose.

I think they're potentially a good deal if you have other cordless tools of that same brand AND several large batteries... they will burn through batteries. If you're going to cut a lot, you probably need a couple 12ah batteries, plus the saw and a charger... that's easily $600+. The difference between that and a $200 gas saw will buy a LOT of gas...