Bird76Mojo said:
Are you staying with stock heads? Going with forced induction?

The only reason I ask is because that 80mm throttle body is far too large for a stock engine. It'll definitely remove a lot of throttle response from idle.. Unless you're swapping heads/intake or plan on running a power adder.
Click to expand...

I do understand all the downfalls, I've had a few modified 302's over the years. But yes, it will also have twisted wedge cnc heads, cam, injectors, and locally tuned. Power nor performance is not something I care about with this truck as it is built just to be a properly bagged cruiser with a good stereo, the engine swap is just for the sake of Looks and Sound. If I need to try restrictor plates inside the piping or tapered spacer I will address that at the time, as well as if my tuner wants to move to Haltech instead of SCT to have better throttle tip-in control then we will go that route.

No turbo or SC, as I already have cars that are actually fast and if I wanted power and response from this truck I wouldn't waste my time with any v8 and would have just put a 2J in it which is what I normally do, and is why I have extra throttle bodies laying around, at least I'm not trying to use this Wilson 105mm.. 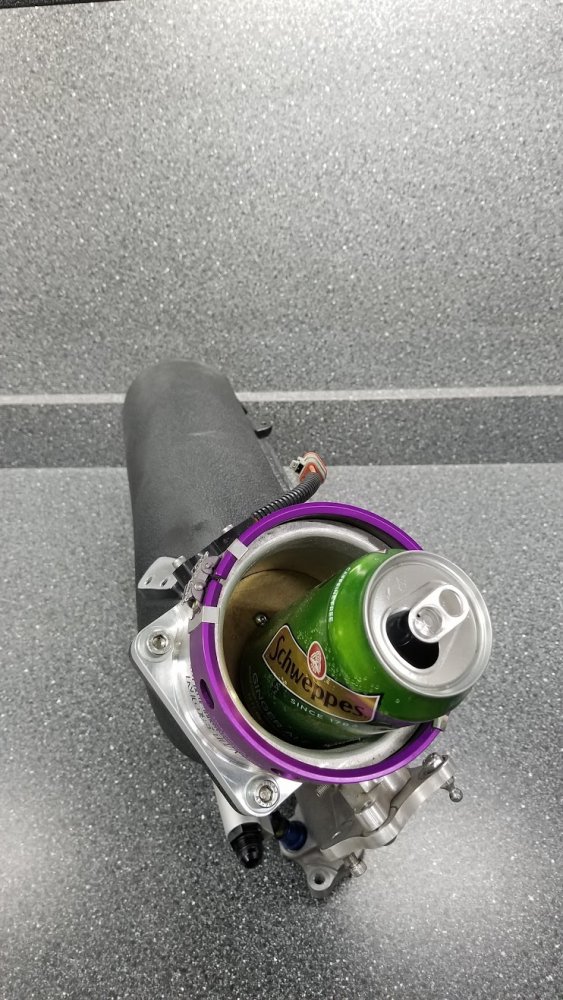 Because the upper control arms are Raised 2" the toe would change dramatically when lift/lowering the front bags, but by raising the steering rack by 1" it eliminated that toe change during travel. So although the stamped steel Explorer oil pan did originally fit, it would not clear the steering rack after raising it 1".

So I got the dual sump Mustang pan, and it is a good bit slimmer in all aspects, but it still wasn't enough, so it had to be sectioned and notched.

The oil pump had a 1/4" protrusion that needed to be cut off to get every bit of clearance I could manage for making the front sump as compact as possible. 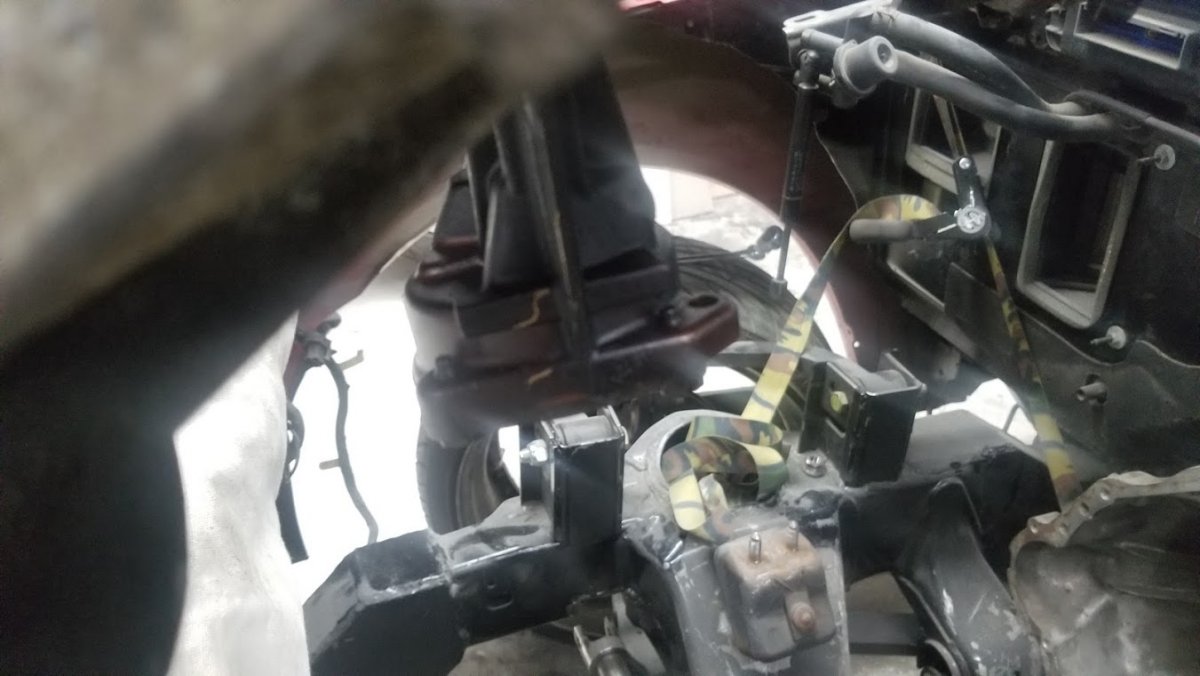 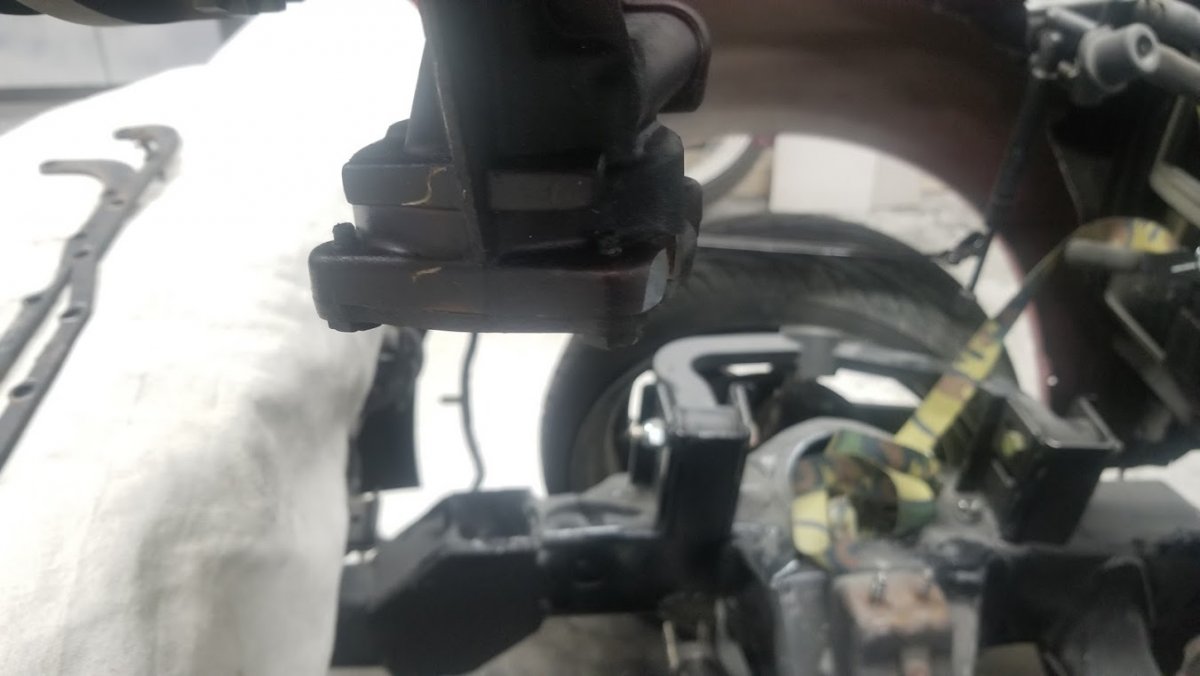 There isn't much room to gain between the bottom of pump and pan either, but I got about 1/4" of raise from the pan. 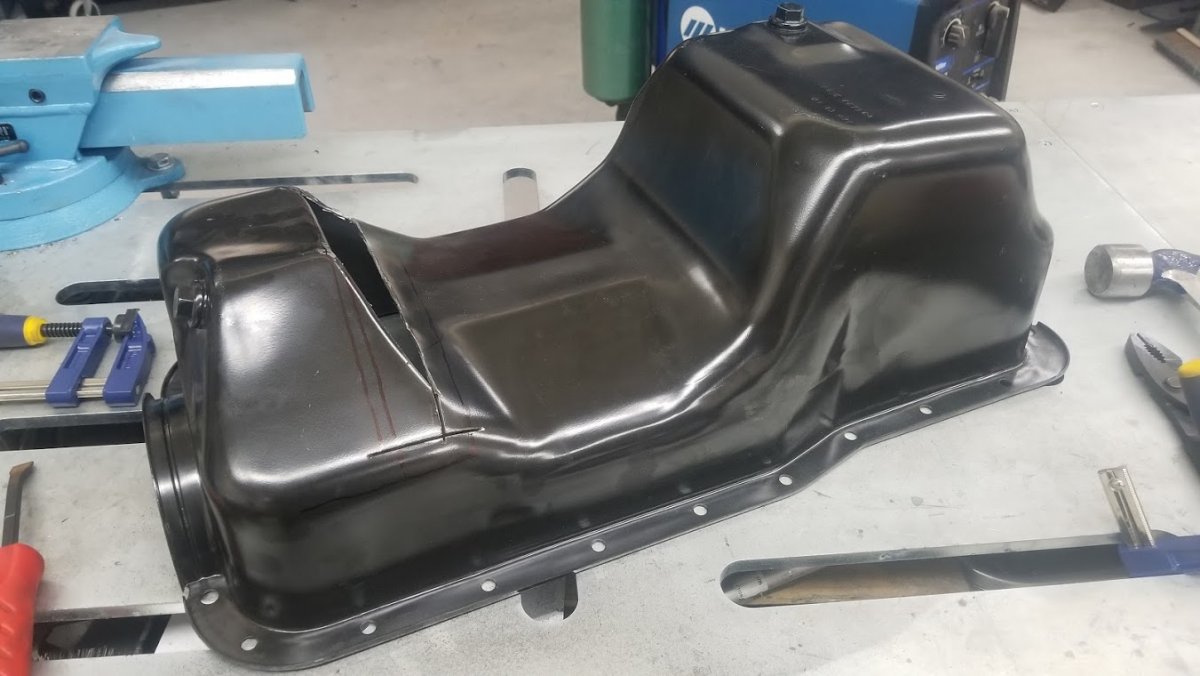 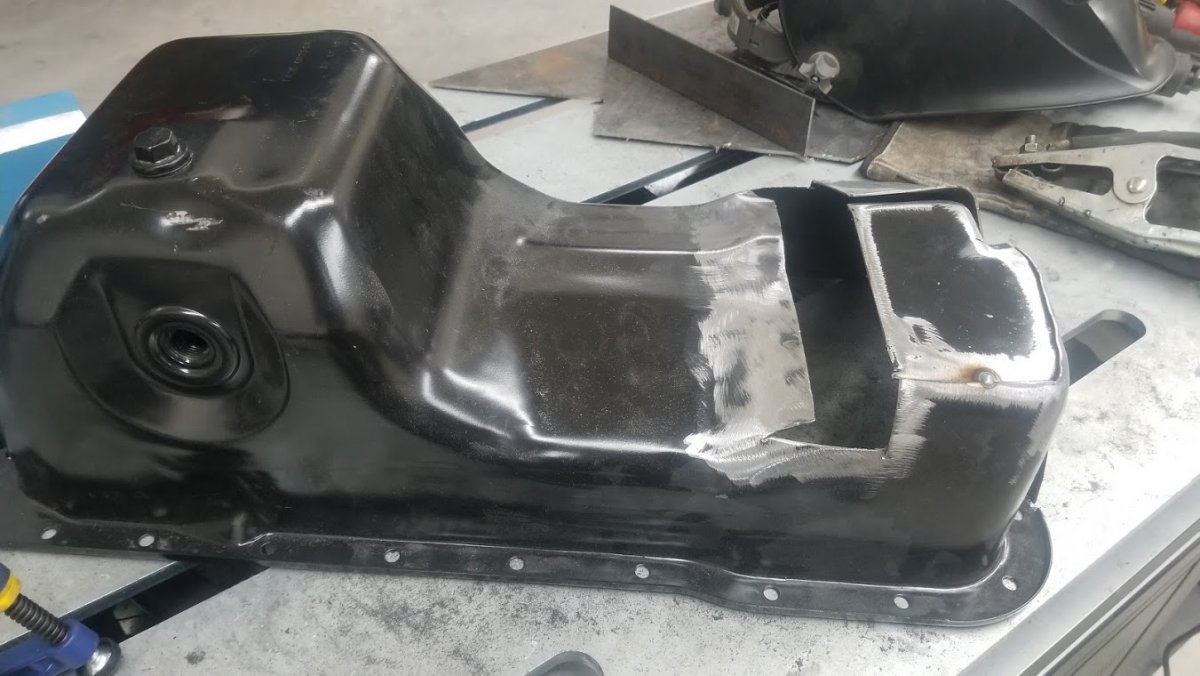 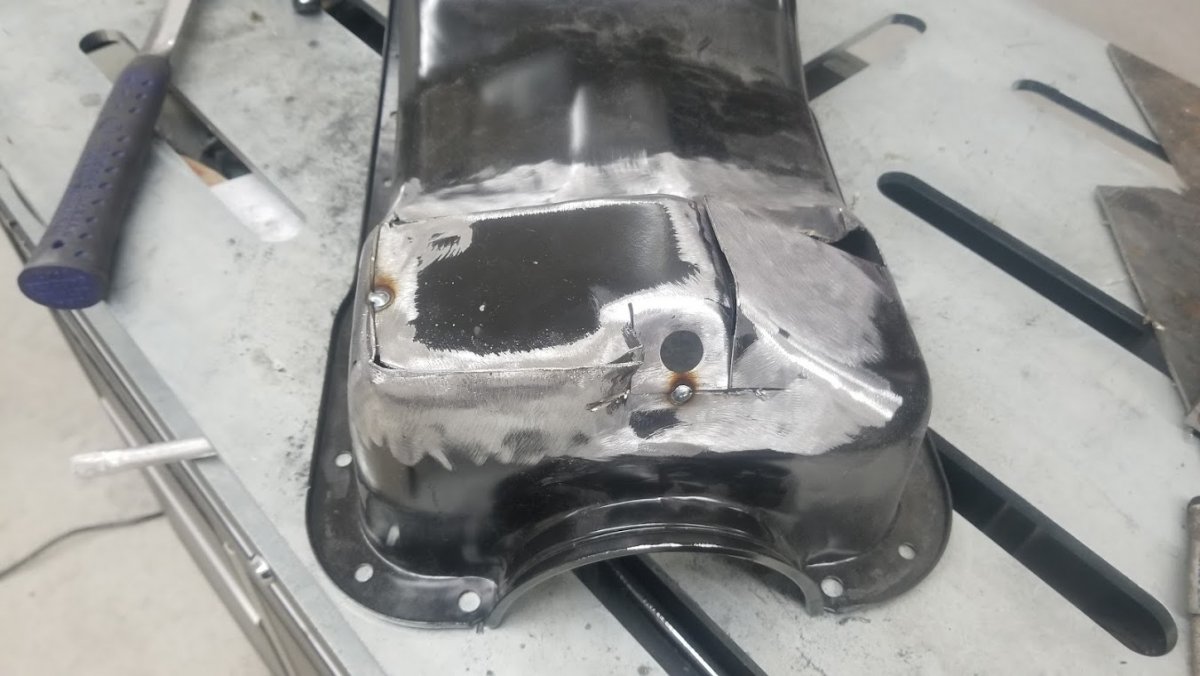 Here is the first round of welding the pan, I'm sure I will need to chase down some pinholes as oil finds it way through just about anything. But I will do some leaktesting and touchups before all the motor parts go to powdercoat once all the motor test fitting is complete. I've had this stupid motor in and out of the truck like literally 40 times making this chunky engine fit into such a modified frame and still clear under the hood and keep a/c. 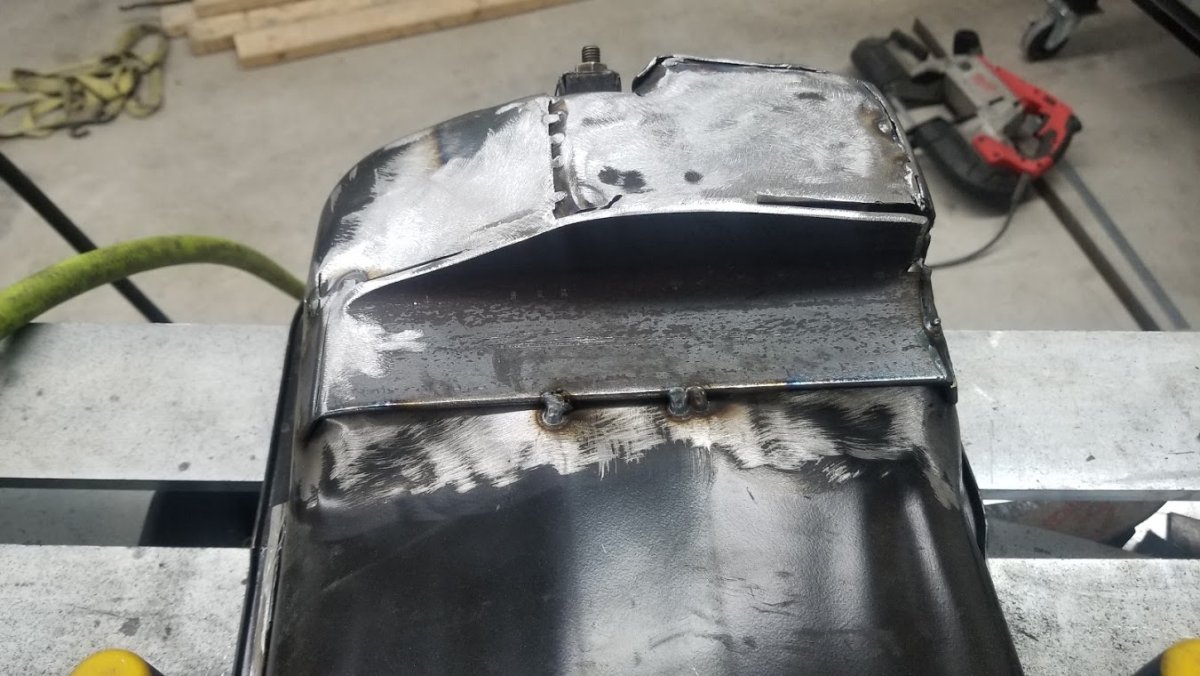 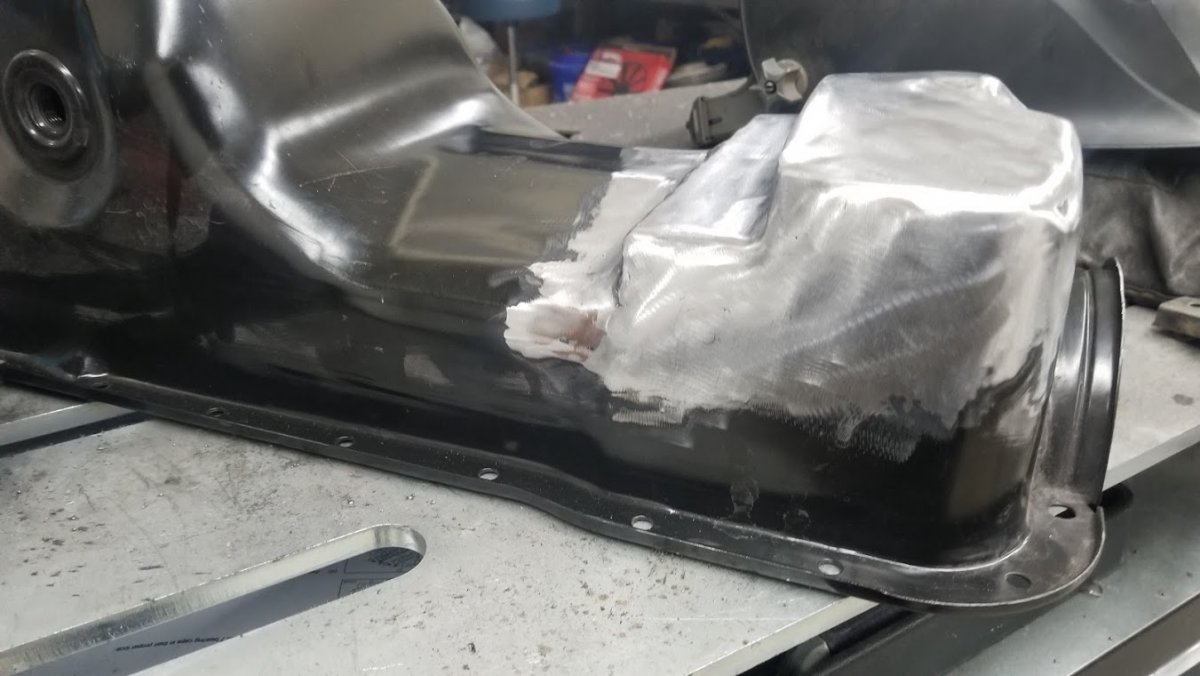 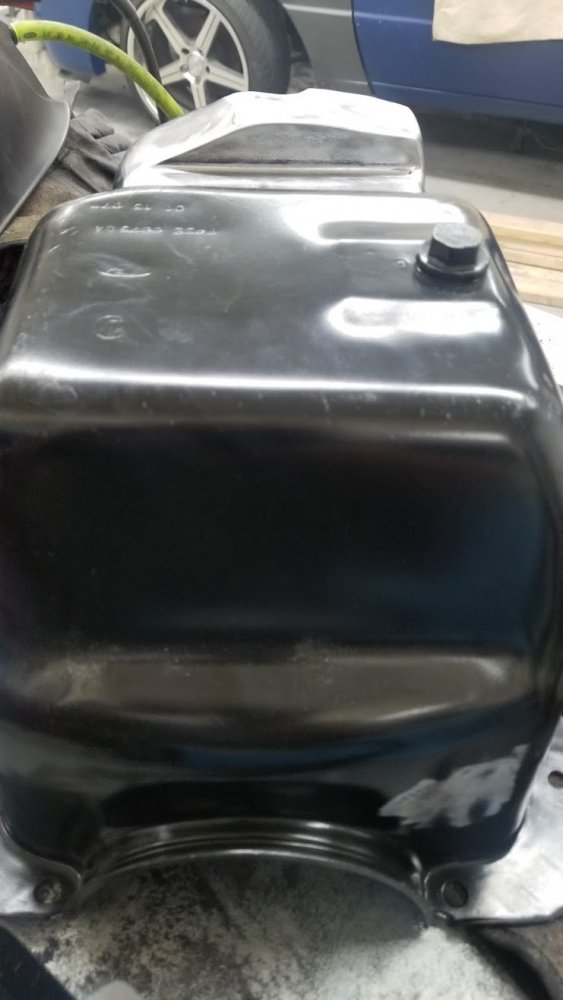 And now I have good clearance over the Raised rack and still some room for some motor movement. 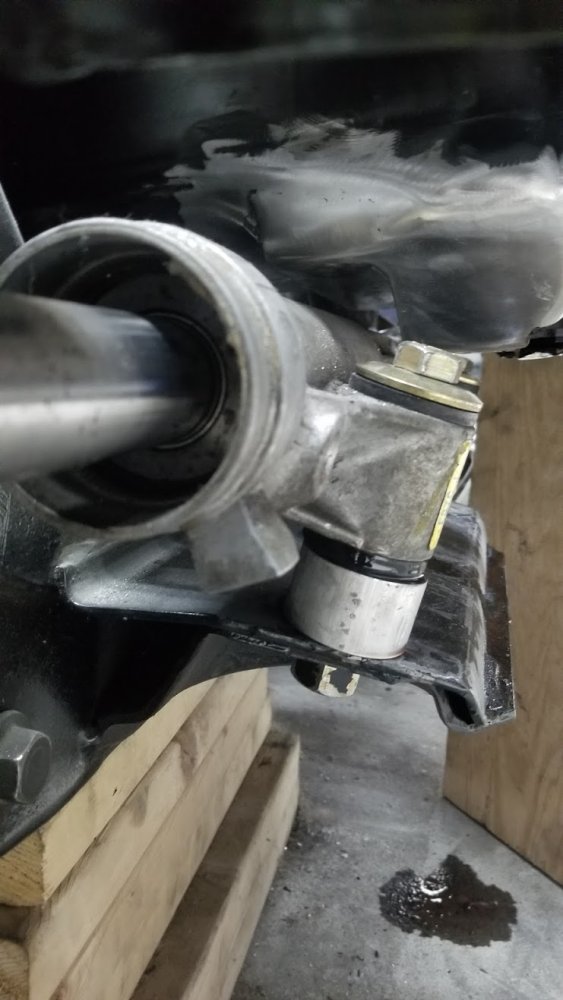 I am using the explorer aluminum radiator commonly found on ebay, it fit good, and seems decent enough quality. It was made to use the stock plastic fan shroud, and I couldn't find any company selling an aluminum shroud/electric fan setup for a ranger/explorer, so I just made a basic aluminum shroud to fit instead, it will use a 16" Slimline Spal. 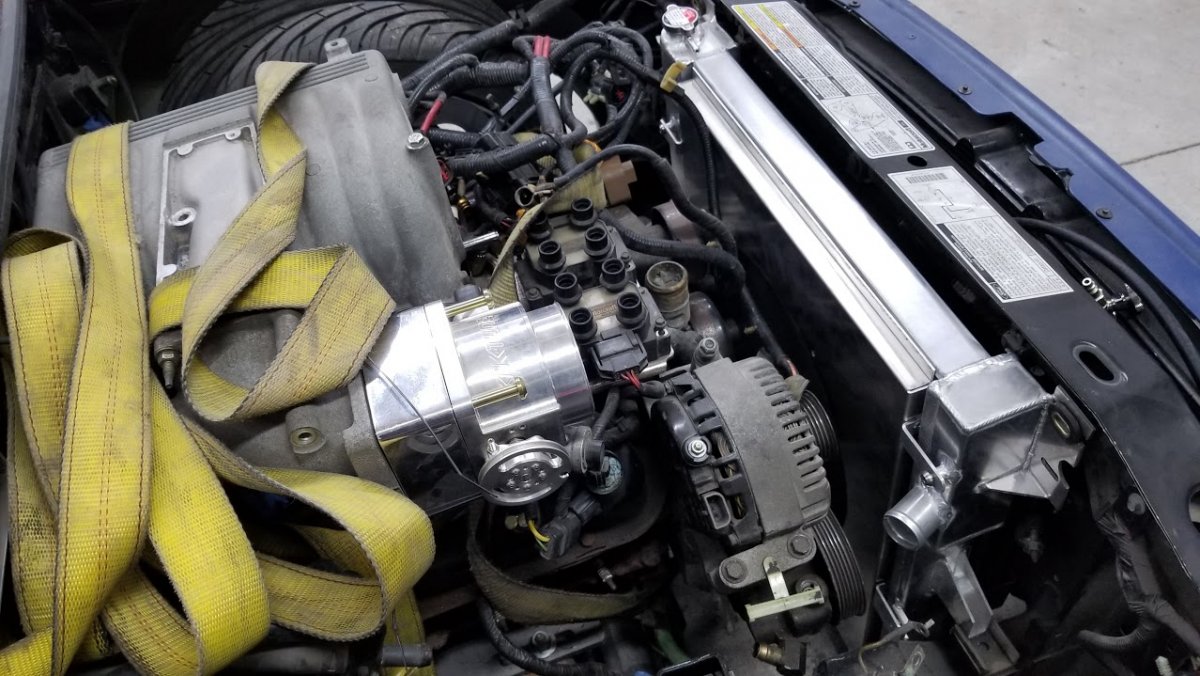 I also used the Explorer gas hood struts/hinges on a powerdome/edge hood. The hinges weren't too bad to do, I just drilled and crimped nutserts on the firewall where the explorer hinge holes needed to be as they do not match the smaller bolt pattern on the ranger. The hood side of the hinges fit directly. (Remember you do HAVE TO use TWO Drivers side explorer hinges when putting these on a ranger!) 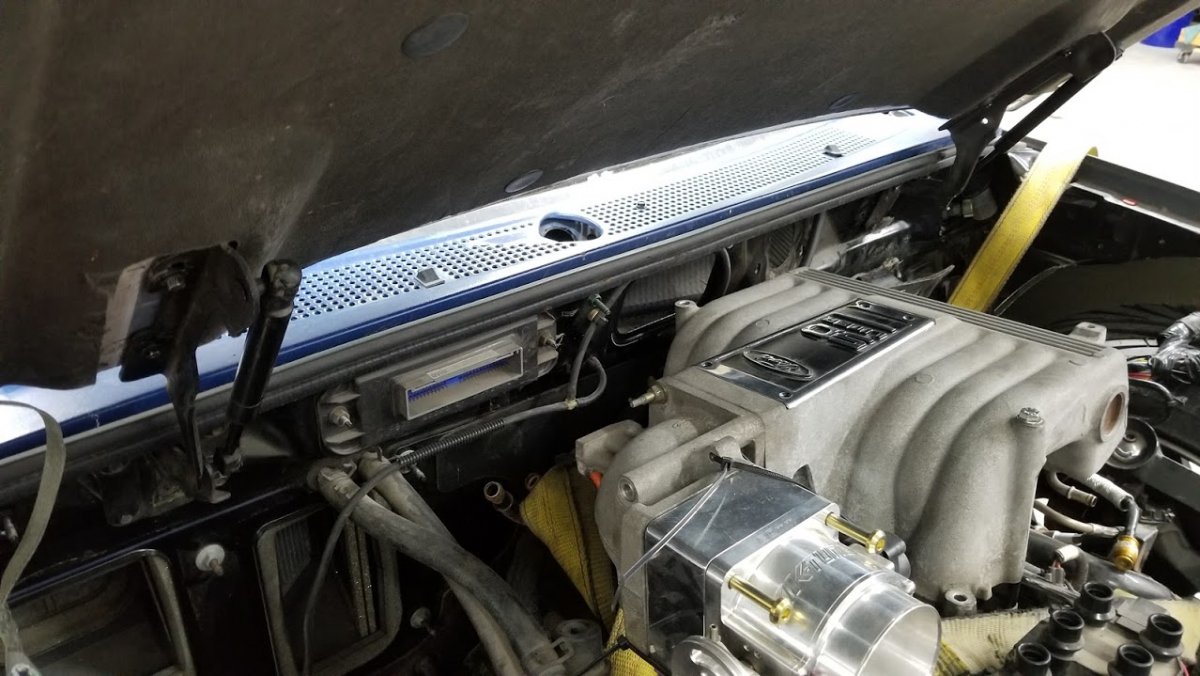 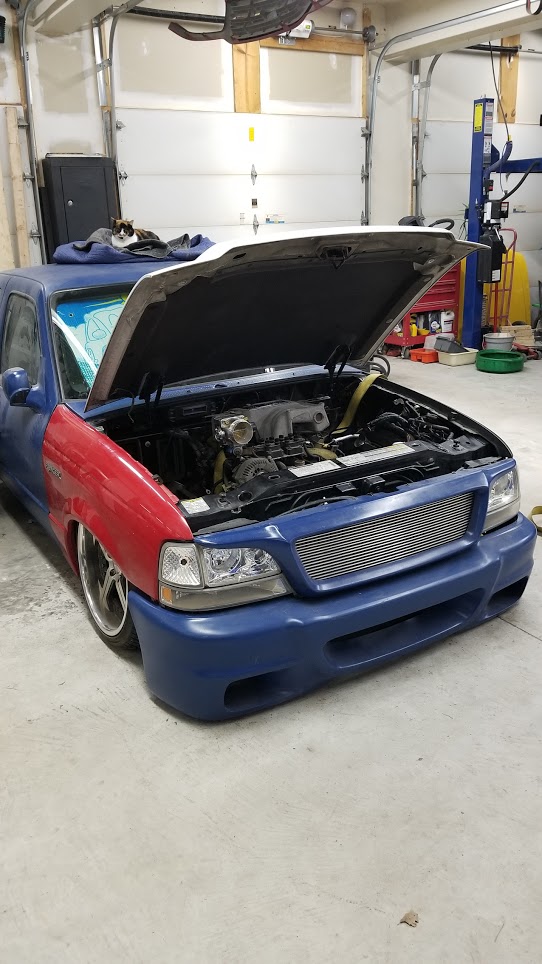 Here are a couple frame pics:

And I removed the 2000 Lights/Header/APC Dagger Grille and put on a 2001 Header and Grille to use with the Brazilian Headlight swap. 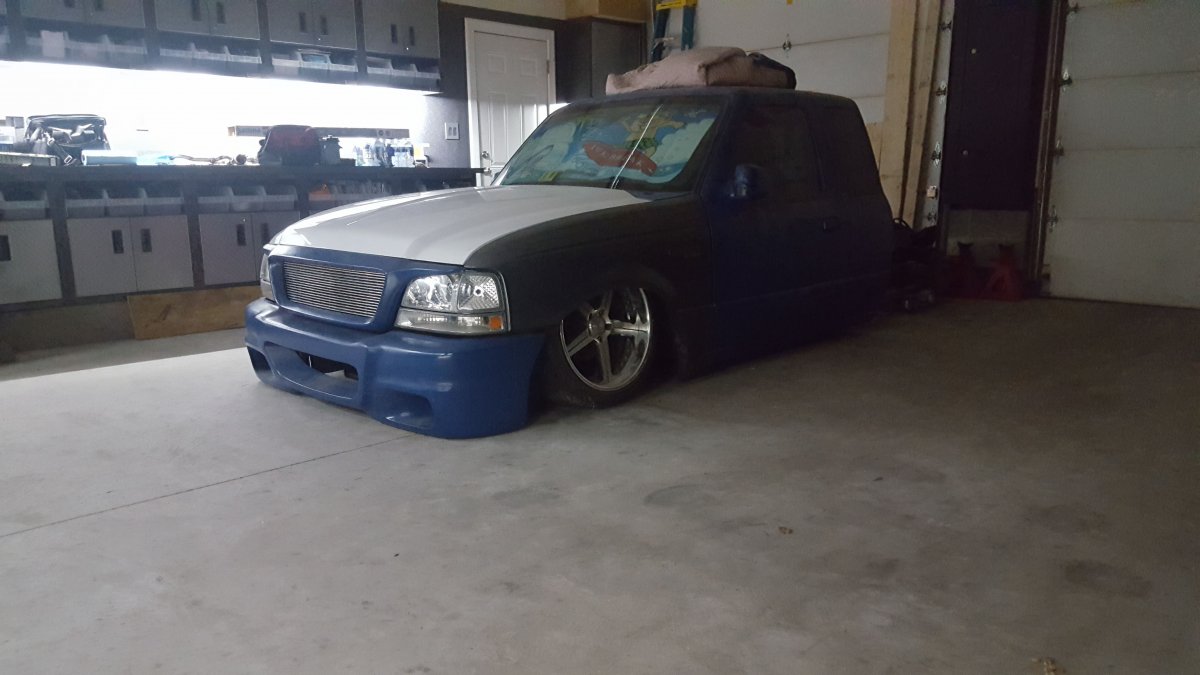 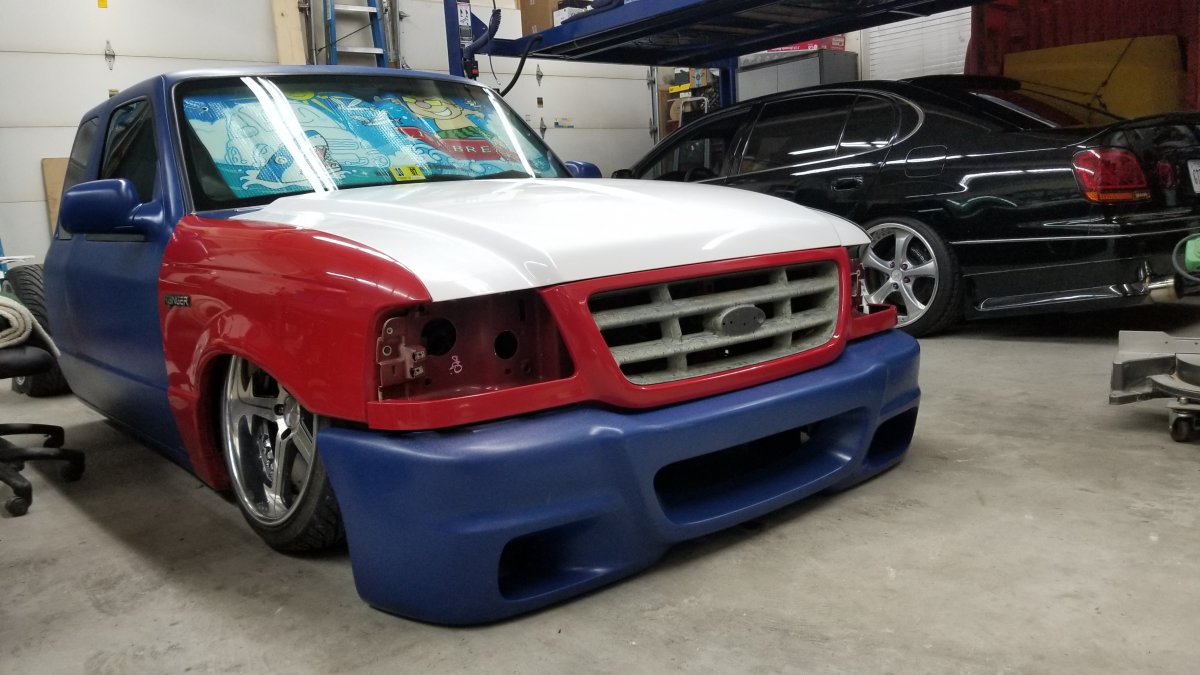 Pulled the truck out and washed it off today, trying to fool myself into thinking I'm going to actually work on it 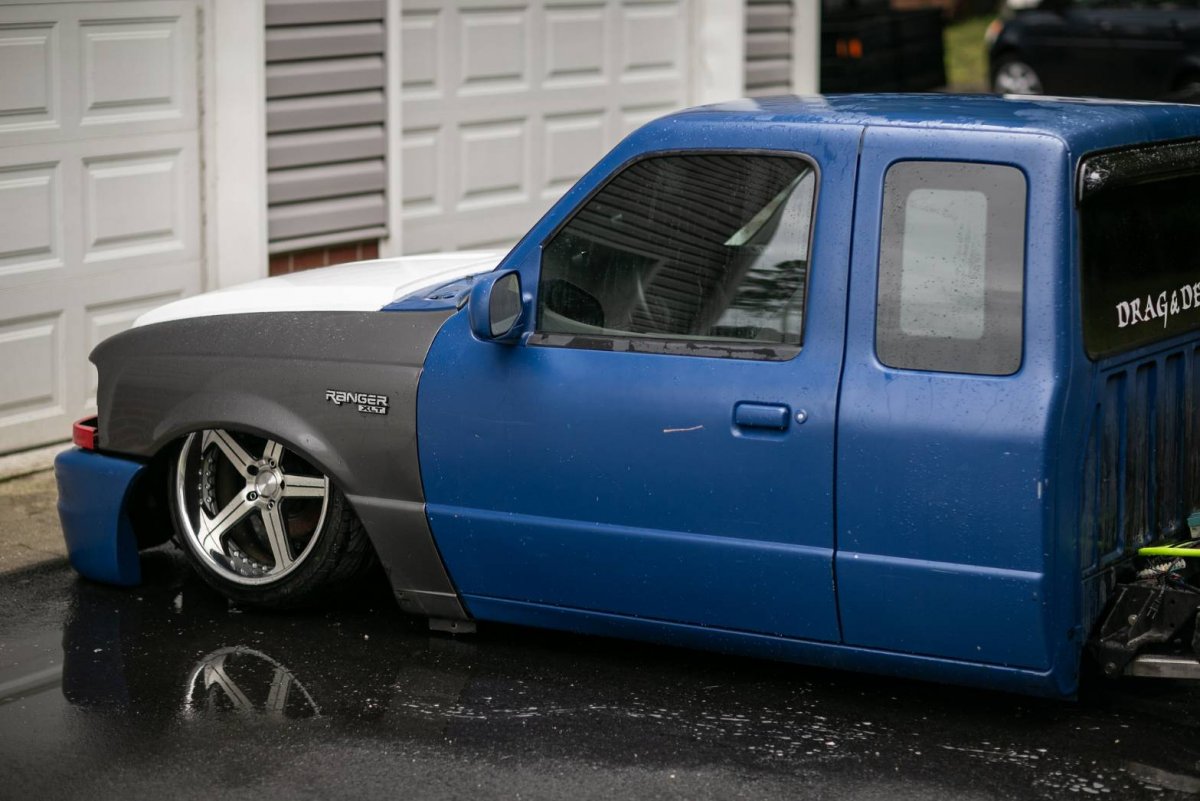 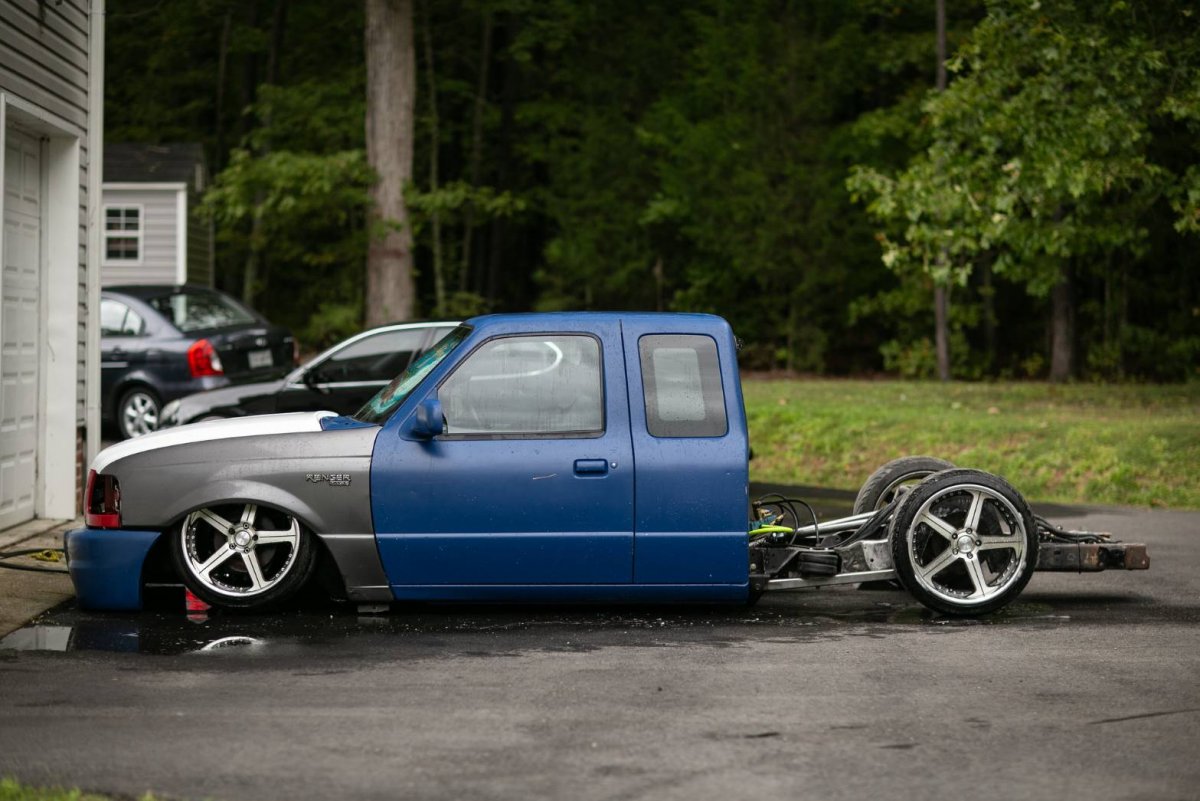 And here are a couple videos of the airbags in action. I need to do the front fender tubs and start mounting the new air tank and fuel cell next.

Dealing with the 5.0 swap into a heavily modifed and Z'd frame has not been easy at all. Most guys with Z'd frames use the 4cyl motors as they are obviously smaller and easier to work around.

I have no intention of cutting a hole in the hood with the motor sticking out and no intention of using some bulky aftermarket cowl hood. I was able to get an Edge Powerdome hood which does give about 1" more inch of clearance which helps some.

After moving the motor mounts like 6 times, and going back and forth between the 5.0 mounts/Plates and the 4.0 mounts/RicksRangerz Plates I moved the motor yet again yesterday and was able to move the rack back about 1/2", which in conjunction with the notched oil pan I previously modified and adjusting transmission crossmember some more I seem to have solved the problem and got it all under the hood, while still clearing the steering rack and radiator fan.

Every time I moved the motor mounts, it was either hitting the hood, the radiator, the firewall, or the steering rack. I could never get it to clear them all. Finally now they are all still very close but all clear, and now the only interferance I have is the wiper motor hitting the intake plenum and the top of the M5OD-R2 hitting the trans tunnel in the shifter hole area, so I will just need to modify the wipermotor housing and notch/raise/plate around the shifter hole, which looks like it will still fit under the Explorer Center Console... So I think I can move forward finally. 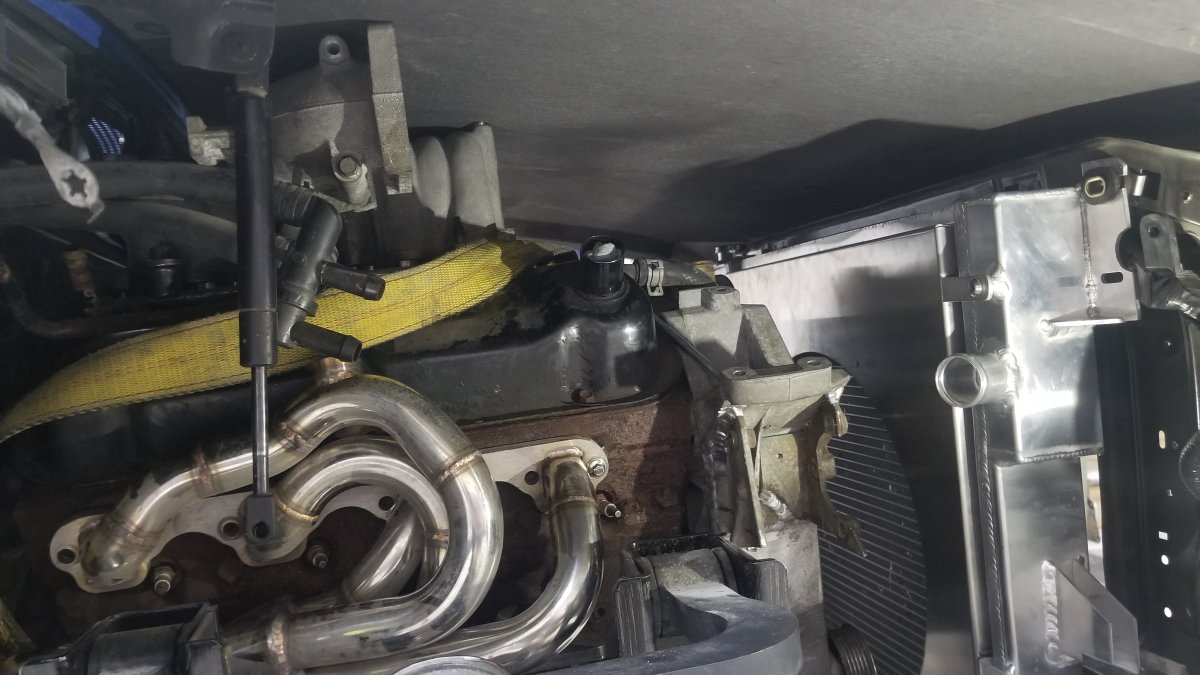 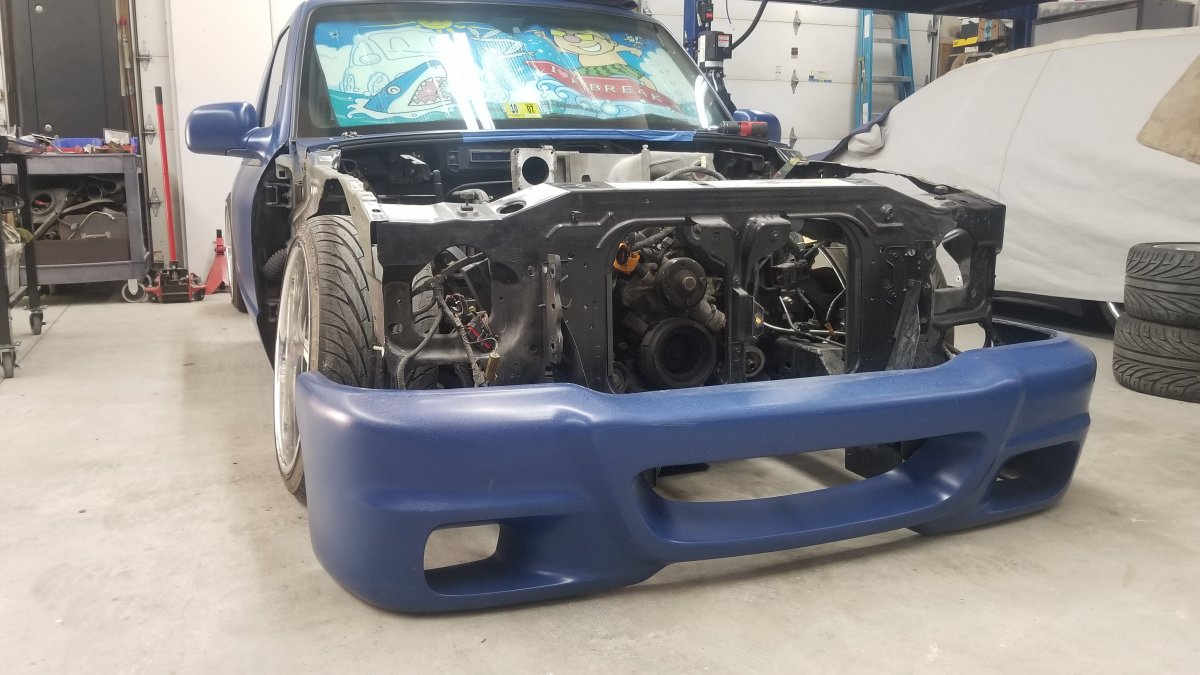 I decided to drill out all the spot welds on the rear corner posts and top rails to be able to move the entire floor, sides, back wall up as a single unit instead of the traditional ways of cutting the bottom floor out or sectioning out steps around all 3 sides. This also allowed the corners and top rails to stay factory attached and square to each other as a framework to make alignment easier with less potential for measurement mistakes, and let the bed just slide directly upwards and seat back under the top rail lips and reweld in all the factory spot weld locations.

There will be less line welding and cleanup doing this method, it was just a little slower spot drilling and separating the panels but makes it a bit more like oem. 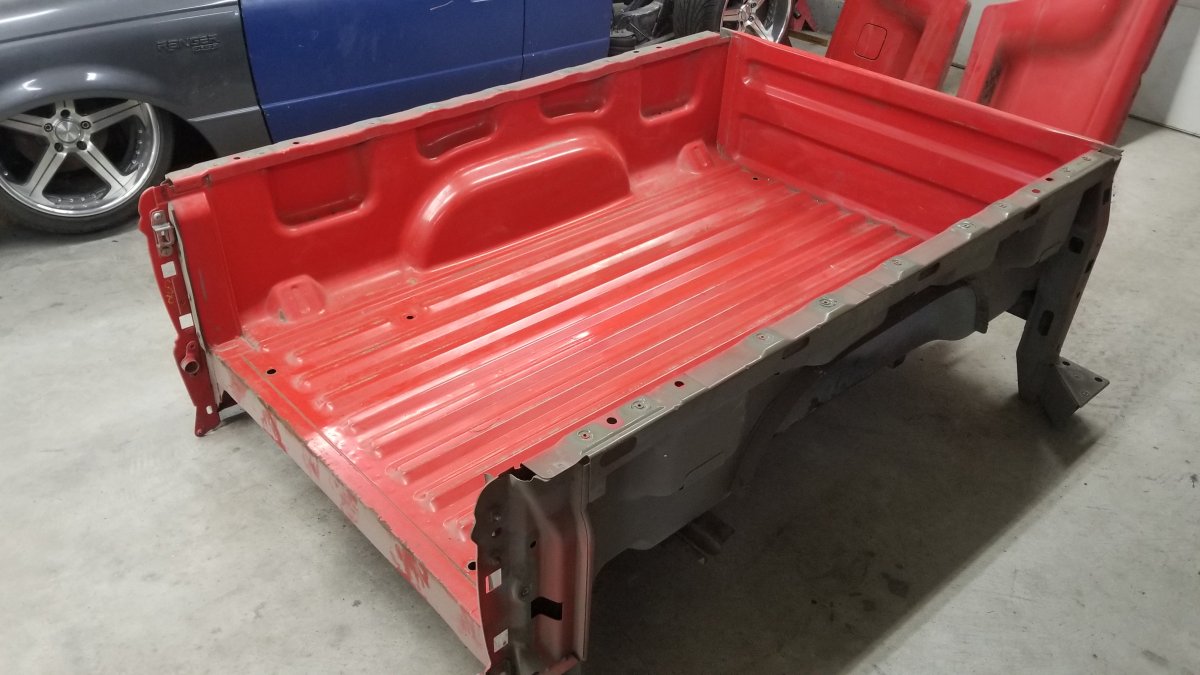 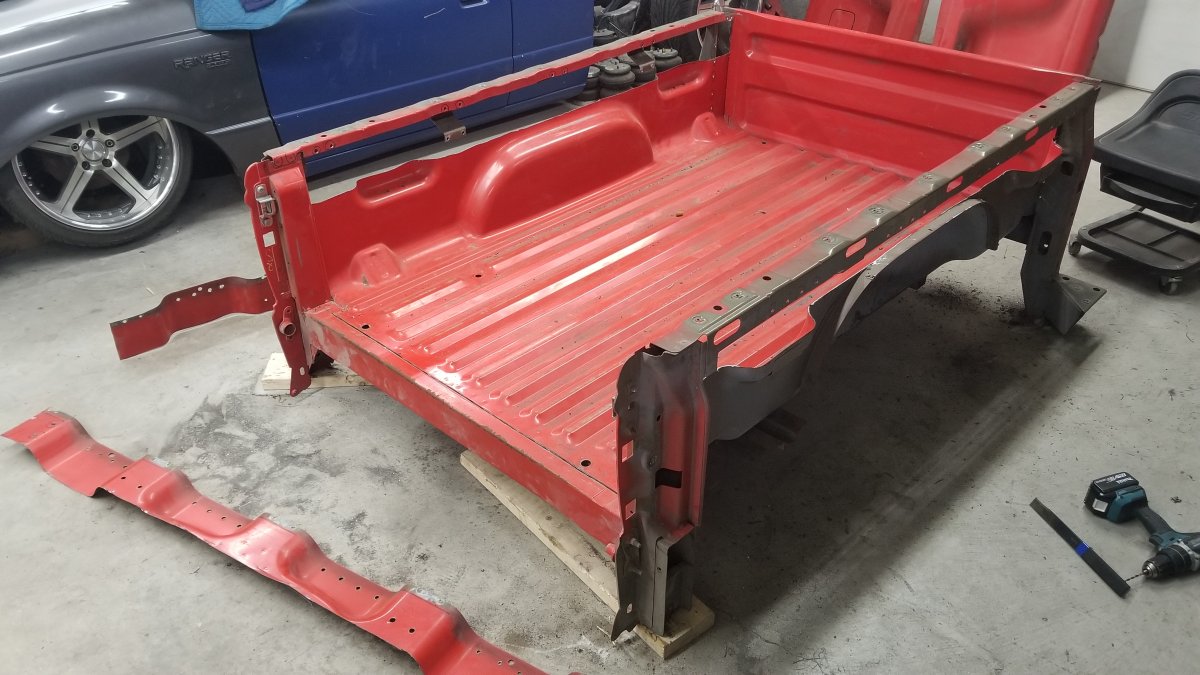 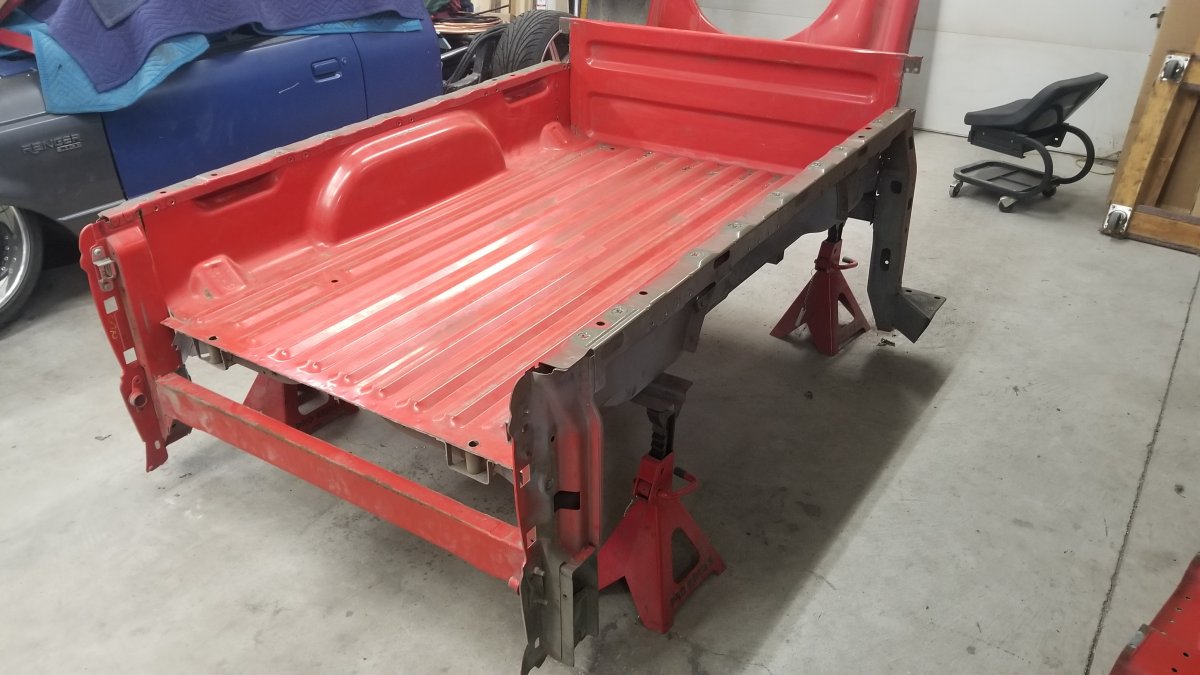 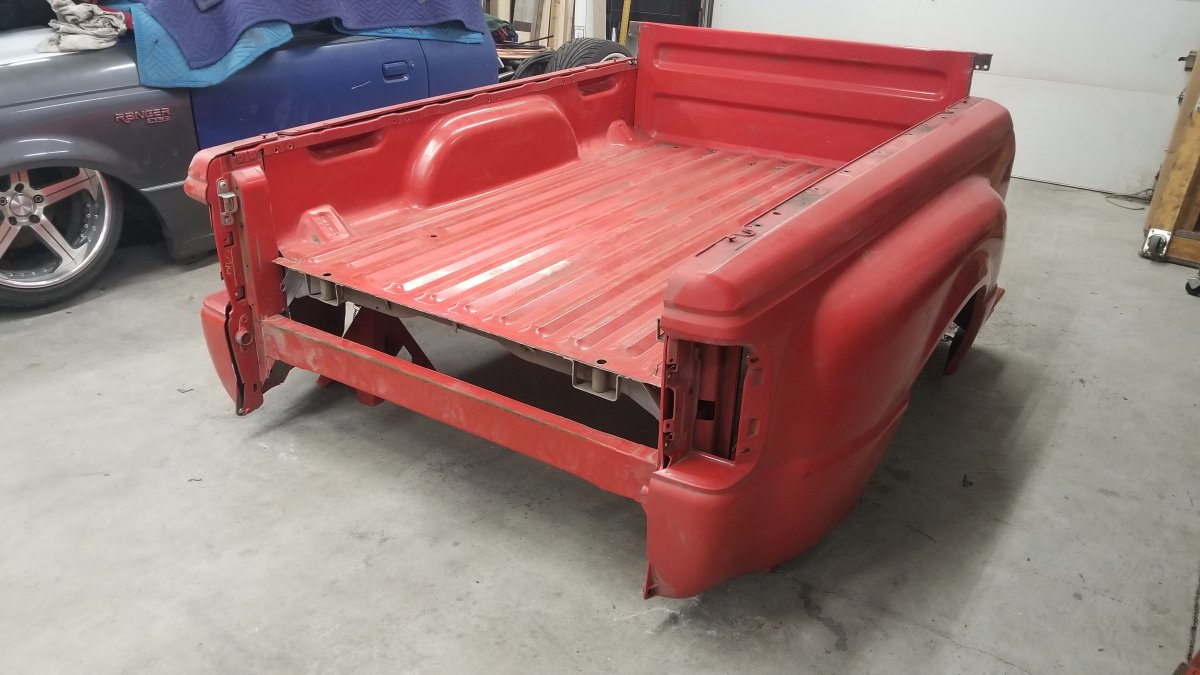 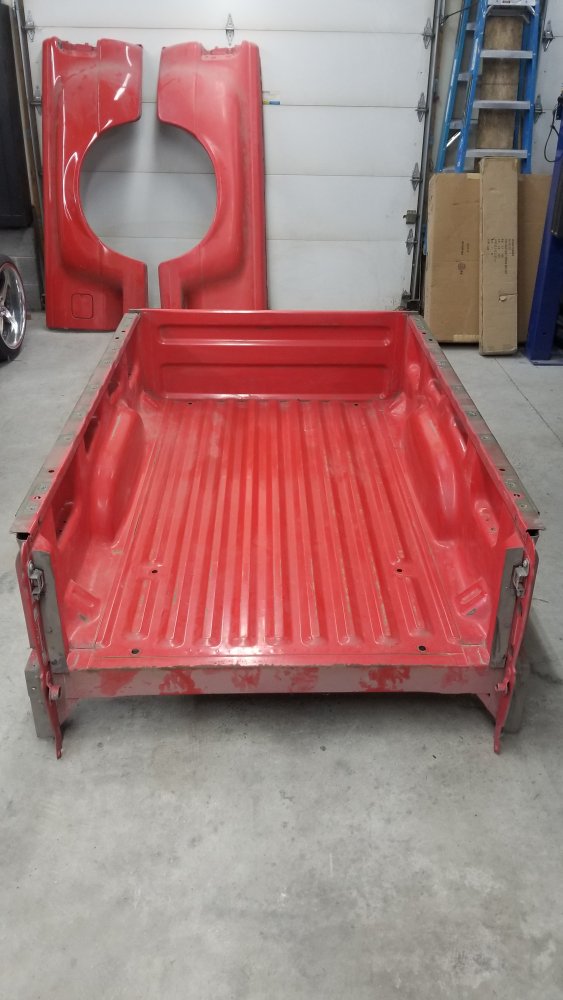 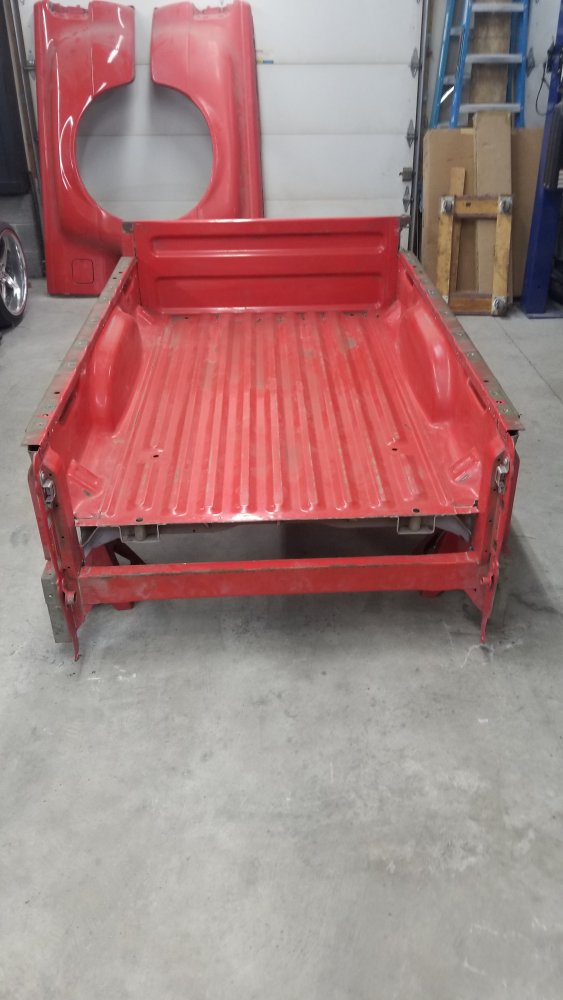 I will be sectioning out the back wall top indented panel and using it to fill the rear lower gap, so it matches the oem style of the bed. In the end will be a full raised bed floor, using all factory metal, no crazy box tube structures or patched up holes..
Last edited: May 10, 2021

Did some test fitting of the raised bed, seems to be fitting well. 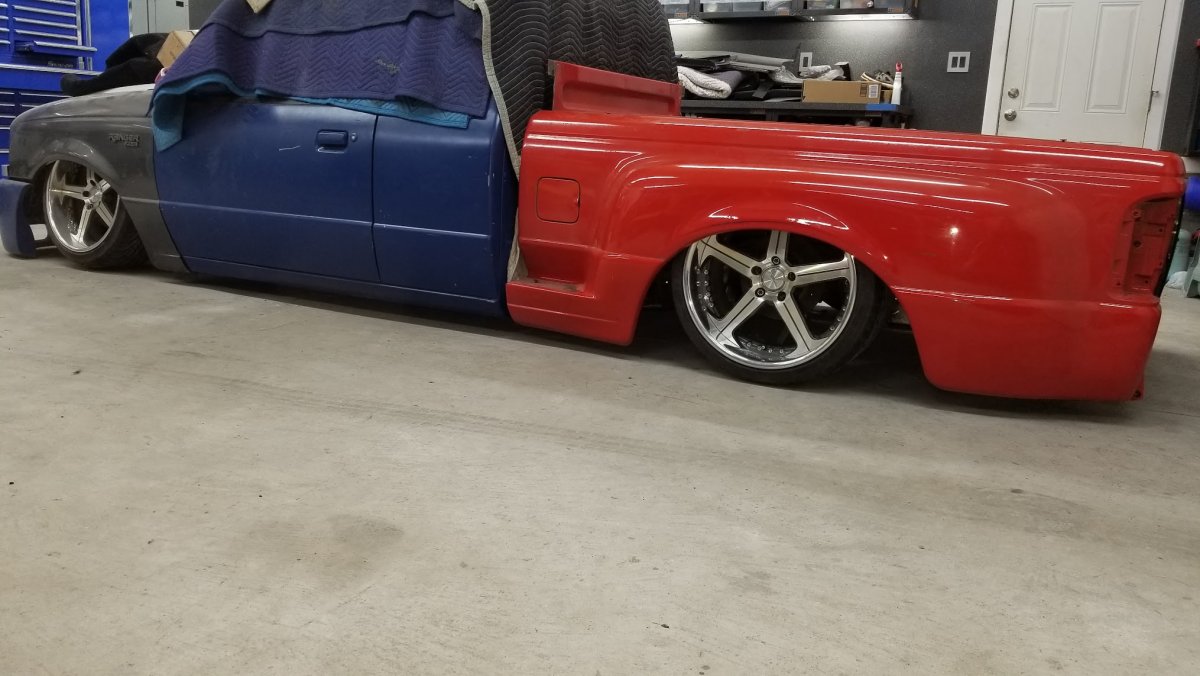 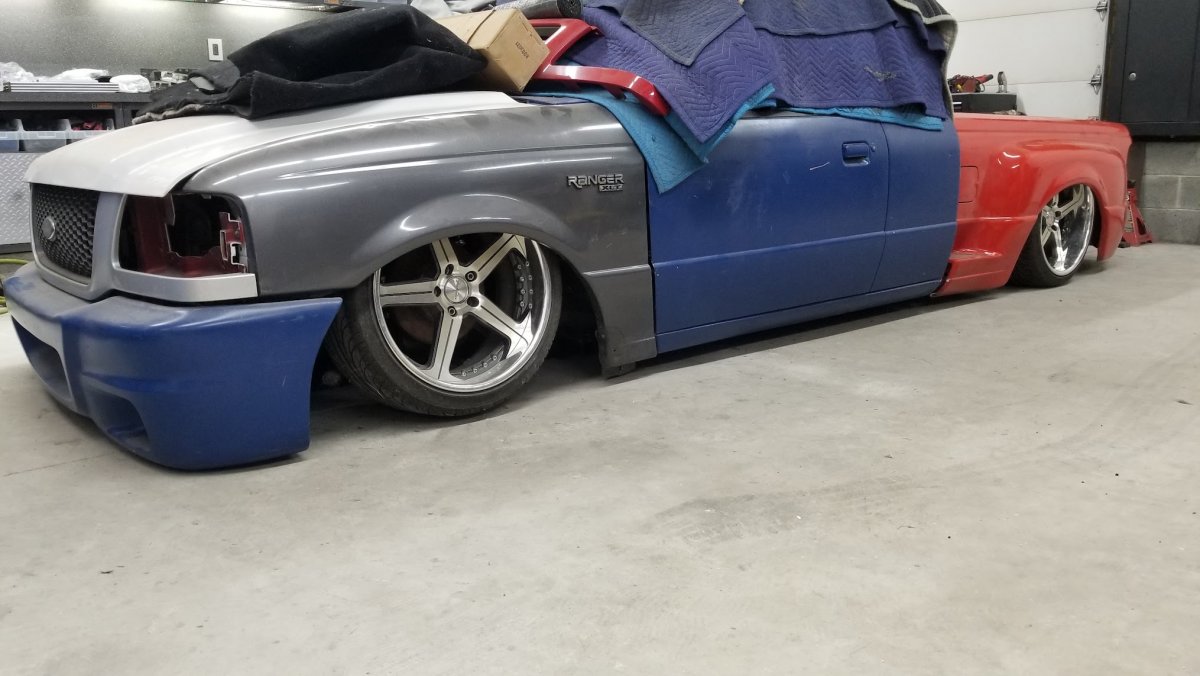 The common problem when Z'ing or Bodydropping a Ranger is that brake booster and master cylinder are huge, the tire will hit it, the gt40p headers hit it, and because I have raised upper control arm mounts the arms hit the master cylinder was well. 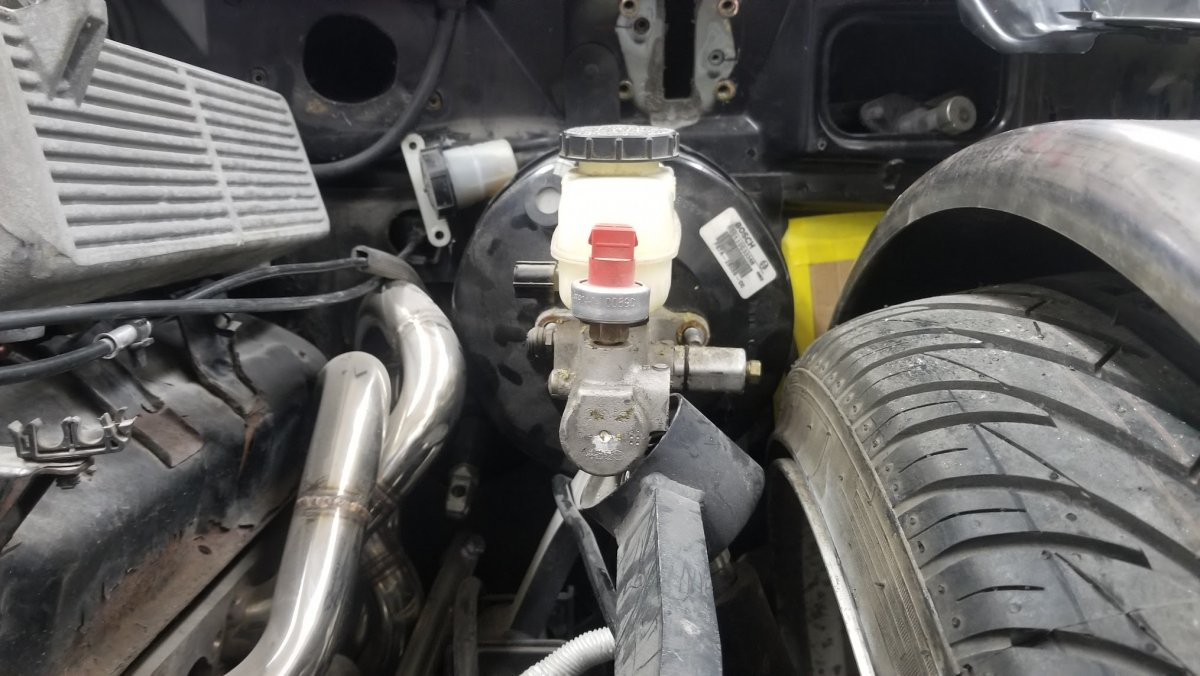 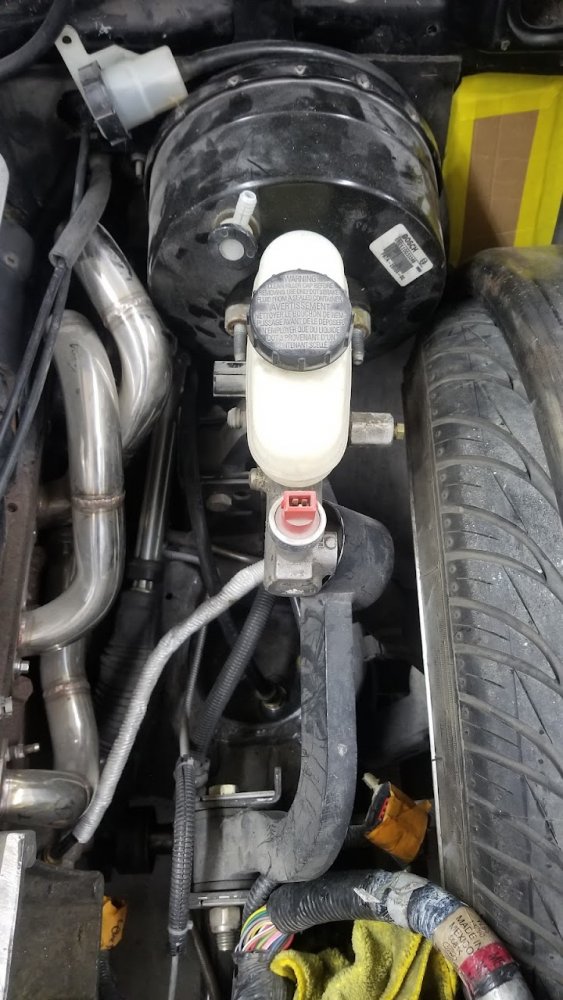 2Krngr said:
The common problem when Z'ing or Bodydropping a Ranger is that the tire will hit it, the gt40p headers hit it, and because I have raised upper control arm mounts the arms hit the master cylinder was well.