Rangerang said:
Looks like I'd need to remove the carrier & its support so this would be a one-way deal; no room for error.
I've always wondered why they ever used a two piece?

My T-case flange is SMALL so I'll replace that. Another post says 4x4 Explorers may be a source.
Click to expand...

Carrier bearings fail and need to be replaced, so it should be removable/replaceable should you ever want to go back - Not sure why you would, but this shouldn't be a destructive mod. (Been a while since I was under a Ranger with 2 piece shaft and my BiL's is 500 miles away, for me to verify).

1210 u-joints/smaller diameter tube/transfer case & pinion flanges allowed Ford's accountants to save a few bucks on every Ranger they built - they were building them in 100s of thousands/year at time; so, the savings added up. But a small diameter tube is prone to out of control vibrations if too long. In '86, when they released the SuperCab, they weren't certain they would sell very many, so 2 piece drive shaft with carrier bearing was the expedient solution.

When it turns out, the majority of sales are SuperCabs: larger tube which allows removal of a drive shaft section and u-joint becomes the overall less expensive package; larger flanges and 1310 u-joints follow along to make it work.

4x4 Explorer is an option for a regular cab long box, but it would be about 1' short for a SCSB.

I like bobbywalter's solution - didn't consider that the splines in the driveshaft would be identical; just knew they were different between 7.5 & 8.8 differential pinions. You could even apply it to a newer 1 piece driveshaft, at least temporarily - it would allow you to put off removing the output flange on the transfer case to a future date when you have time/parts ready. (Although it doesn't sound like this is your DD, that you need running on Monday).

p.s. There are nice aluminum 1 piece shafts which don't rust/save a couple ounces.

It's destructive because the cross member the carrier is on is in the path of a one piece shaft. I'd probably slice out a section of it and leave the ends as they're very solidly riveted. So much so that it looks like it may be a structural piece.

Rangerang said:
It's destructive because the cross member the carrier is on is in the path of a one piece shaft. I'd probably slice out a section of it and leave the ends as they're very solidly riveted. So much so that it looks like it may be a structural piece.
Click to expand...

They usually are structural. The frame rails are very strong IF you keep them from twisting. They will want to twist as weight is put down on them. That is why those crossmembers are attached to the top and bottom of the frame rail.

Rangerang said:
It's destructive because the cross member the carrier is on is in the path of a one piece shaft. I'd probably slice out a section of it and leave the ends as they're very solidly riveted. So much so that it looks like it may be a structural piece.
Click to expand...

No. It's not there because it needs to be or else the frame will fold up like a cheap lawnchair.....just so the hanger bearing has a happy place to live and pass the time of day.


It offers structure because it is there, so there's that.....

When going to one piece shaft, remove the cross member....

if your going to lose sleep over that....relocate it to the upper side of the rails and put some nodes or struts in.

It's only bolted to the bottom of the frame rail but it's a righteously strong piece, more than seems necessary for just the carrier. I could probably flip it & it might fit.

You can flip it. Done it many times. 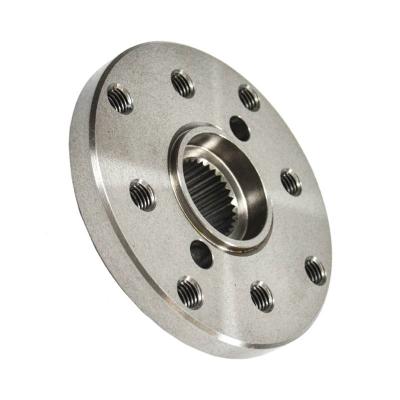 You used to be able to get this for the pinion and tcase flange....you can do like mentioned earlier and drill your own as well....which may prove easier.

My worst wrecking yard experience ever:
I found a yard that had a '98 driveshaft that looked good. They had a "chat" so I asked if it was 62-1/4", large rear yoke, small front yoke. After 5 minutes he replied he had it. I Googled the place and it was 1-1/2 hour drive, one way, so I called and asked about shipping it. $50, so ok. They emailed me a credit card approval form that also required front & back photos of my drivers license. Seemed odd to me so I drove in today with my wife. Got there and he wanted me to pay for it before he took it off the truck. I said I wouldn't pay for it until I'd measured it. That's when things got weird. He said "I'm not going to pay my guy for an hour to take off something you're not going to buy, don't you see my position?". I said "I'm not going to pre-pay for a part that I'm not sure will fit, don't you see my position?" We went back & forth until he sat at his computer and said "That truck's been crushed" WTF? I said he told me he had the part last night; he'd made me wait 5 minutes while he "went out & measured it". I was pissed and wanted to unload on him but I've found it's best to always remain civil. I said "Well, it looks like you don't have what I need, thanks for nothing". Still at his computer, he said "I have a wrecked 2002, super cab ... yada yada". So I repeated my measurements and he wrote them down on an envelope. He went out to measure it, came back and said "62-1/4", large rear yoke & small front yoke". I said "It sounds like we have a deal but I still won't pay until I measure it myself". He said "I'll bring the truck over on a forklift and you can measure it before we take it off". I'm thinking a forklift sounds like bad news but said "ok". Then he tells me the wreck pushed the rear axle back & the driveshaft was separated but it was ok. I'm thinking what kind of wreck would push the rear axle back and separate the driveshaft? Now dubious, I said "Bring it over and I'll check it out". THEN, he opens a styrofoam box and says "First I'm going to eat lunch" WFT? It was 2pm. Now, I don't care when anyone eats lunch but you don't eat lunch in front of a customer who's waiting. I said "We'll go eat lunch too, be back in an hour" Him:"Good, I won't feel rushed". We went for lunch and came back an hour later. By now my wife was done with standing in the office so she parked the car in the shade & waited. Meanwhile, I waited 15 minutes in the office with 2 girls on the phone (zero calls came in) and no owner in sight. I asked if they knew where he was. No. Could they page him? No. So I finally told one of the girls "Well, I'm giving up. He tried to sell me a part he doesn't have; I don't trust this guy". I walked out. On the way to the car a Mexican ran up to me with a driveshaft in pieces. I took out my caliper and measured the front yoke, too big, he'd lied. I got in the car and we left. My wife said she saw the guy removing the shaft from the truck and it had been seriously rear-ended. Rear axle pushed back my ass. If the front yoke had been the right size, I probably would have bought a bent shaft. It looked good to me but, as I understand, an imperceptible bend is very bad news. I'd called the guy from my land line, fortunately, and when we got home there was a message on our machine from him: "I saw you about to drive away and sent my guy after you with the shaft. You left anyway. This is exactly why I don't....DELETED. In thinking back, our agreement was that he wouldn't remove the shaft from the truck until I'd measured it. So much for that. I was lucky to get away with a 4 hour drive and my wife was happy to get off the farm after the Covid lockdown. All in all, it was a nice outing. We ate lunch at a place my wife had pre-found on Google called "Shenanigans". I told her it sounded like a stripper joint but it was very nice.

So, thinking over this whole experience, this guy is either the slimiest crook ever or he's mentally off. Being a nice guy, I'll go with mental. It was too odd to be otherwise but my gut says crook. For the benefit of any Florida members (& others) the place is:

I'd appreciate any recommendations on good, honest, reliable wrecking yards.

Your way mo Betta then me.

Finding good one piece scab driveshafts are hard to do. I could have built a fort out of all the ones I found that the yard mangled by moving the truck with a forklift.

IIRC a first gen Sport Trac has the same length driveshaft too and the driveshaft is tucked up inside it a little better.

All those that I found were mangled too. Eventually found a truck somebody had pulled the trans out of and then junked... so the driveshaft was in the back of the truck with the presumably junk transmission.
You must log in or register to reply here.
Share:
Facebook Twitter Reddit Pinterest Tumblr WhatsApp Email Link