In my boy scout days... they supplied cast iron dutch ovens. We also made a bunch of foil dinners.

My worst memory of family camping with a Coleman stove is when my dad bought a toast maker... and proceeded to make toast on a Coleman stove. Ewwwwwwwww.

We did a lot of foil dinners too. Probably not PC now, but we called them Hobo dinners. I remember the dutch ovens, too. I love cooking in a dutch oven. Last year we took a trip to the UP and stayed in the camper throughout. One of our goals was not to eat out much. We used the dutch oven a ton, we made chili, pizza, loaded nachos, a bunch of desserts, etc. Our son was pretty impressed with the pizza.

I always saw those toaster things and wondered how well they worked. Sounds like I made the right call passing them by.

When talking to the wife last night about downsizing for our upcoming move... I asked about the big tent. She said she will never sleep in a tent again and we are buying a camper.

I love to UP... it can be a tricky place for camping. We went one time in early June... it might as well been December. In July and August there the black flies are just horrible. If it wasn't for the beauty and the fishing I would consider not ever camping there again.

I agree, it's a wonderful place. We were there in August last year, but I didn't notice the black flies too bad, at least no worse than home. The weather can be goofy at times, but again it's no different than home for me. I tend to be a bit of a polar bear and don't handle heat very well. I can always add clothes but there's only so much I can take off. My wife and I were considering moving there and I was actually looking for a job there after our trip, but it never worked out. That's my only visit, though, so maybe we got lucky.

The camper is definitely more convenient. Ours is an old popup that I rehabbed. No plumbing, AC, etc. but it's nice sleeping off the ground and everything is always there in the trailer. Being a small-ish popup we can get it into places the larger trailers can't get. We got it because I had a back injury that ruined any chance of me sleeping on the ground. Then a couple of years ago I found a sleep pad at Cabelas that was a game changer for me. I would use the tent instead of renting hotels when I'd go do bike rides far from home. Last summer we bought a small sailboat and I want to take that somewhere for a weekend, but I can't tow the camper and boat simultaneously, so tent it is.

I used to like when we used the toaster on the propane stove in our popup camper. Can’t remember if dad ever used it on the coleman stove.

I want to lay eyes on one of these. 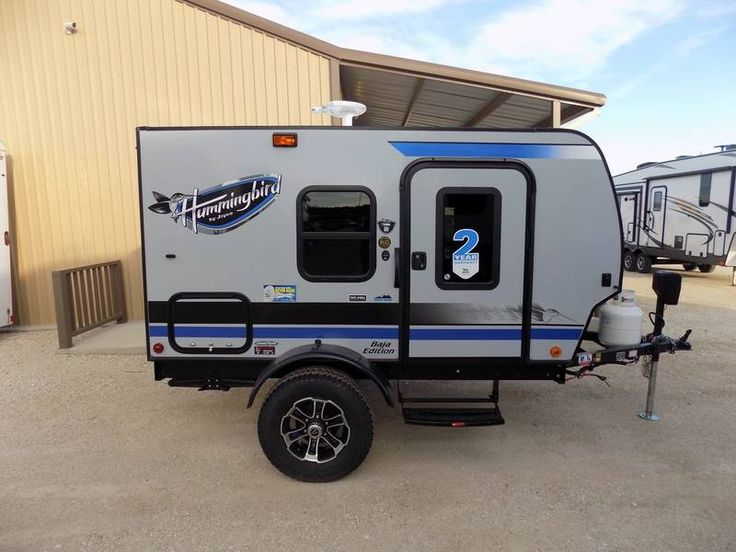 ericbphoto said:
I used to like when we used the toaster on the propane stove in our popup camper. Can’t remember if dad ever used it on the coleman stove.
Click to expand...

You would remember it if he did...

Mmmmm hobo dinners! We make those on the grill every so often. Ate a lot of meals like that when I was a kid, my parents had slash piles all over their land from thinning trees and we'd burn them in the winter, very convenient to cook on.

I got my new lantern cleaned up, and it's a runner! 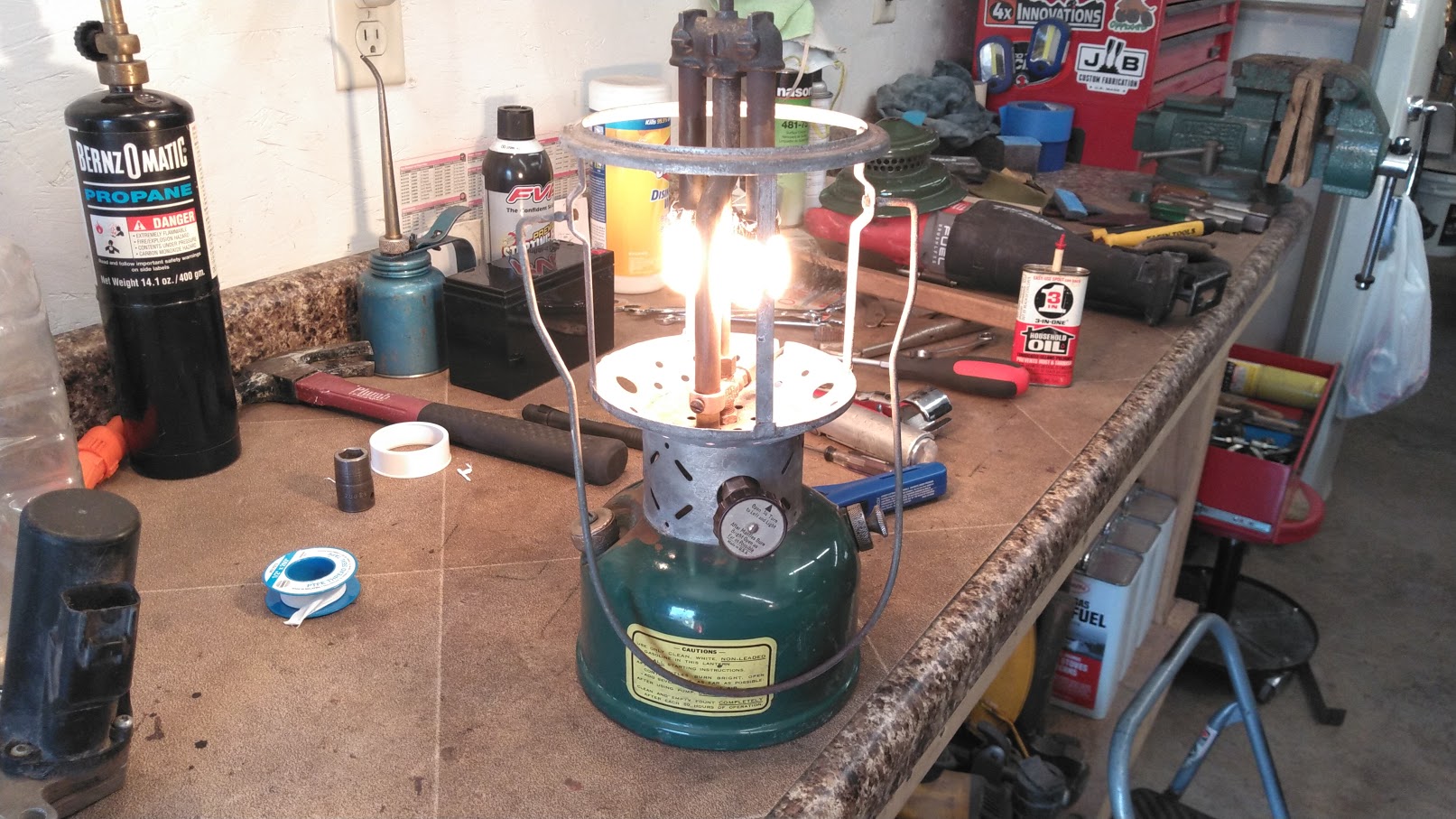 Really didn't need much, wire brushed off the crusty rust on the cage and treated it with naval jelly. Just has some patina now. I removed the valve assembly and gave it the usual vinegar soak, followed by brake cleaner. This whole dang thing is made of brass, fount and everything, so although it was full of rotten fuel, there was zero rust...just a little varnish. Really puts modern lantern build quality to shame! This is probably my best running lantern by far and I think I'll give it a home in the house instead of hanging in my shop. 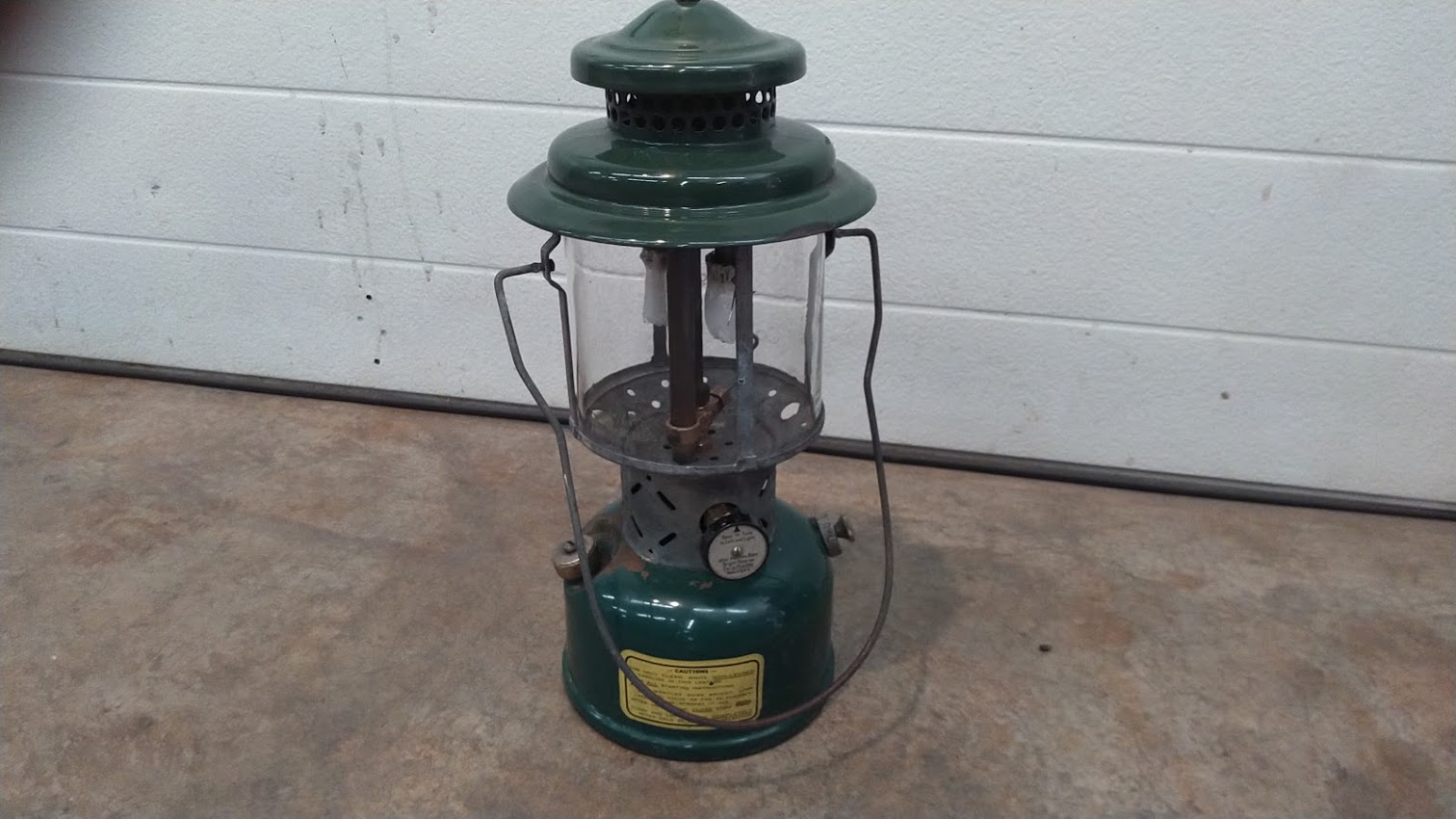 This popped up in my Facebook market place feed tonight... Damn that looks great, probably worth the 70 bucks he wants for it, but I cant justify dropping that much on it.. 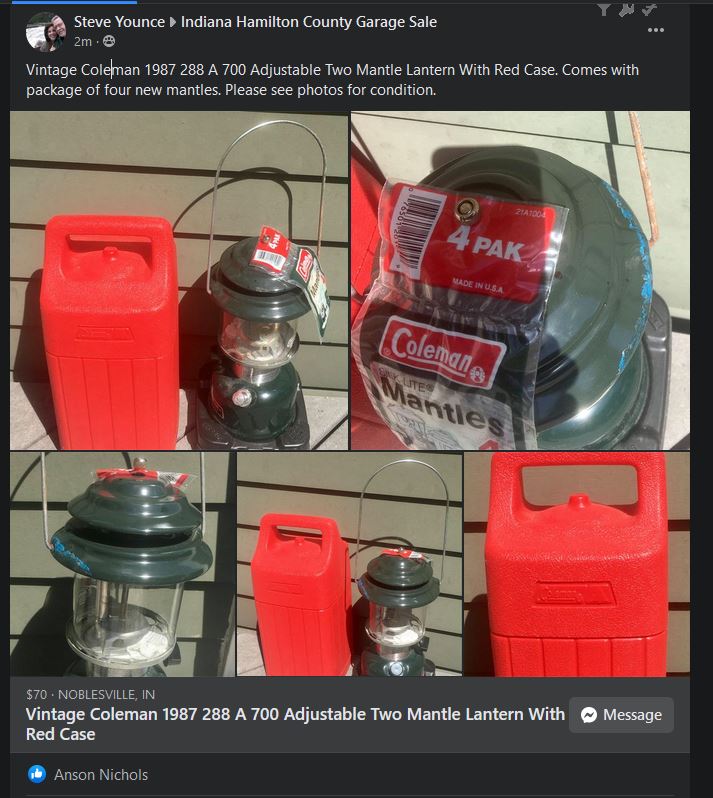 97RangerXLT said:
This popped up in my Facebook market place feed tonight... Damn that looks great, probably worth the 70 bucks he wants for it, but I cant justify dropping that much on it..

Then just sit there in the dark with your cheapness!

I did get this from my grandfather's estate though yesterday: 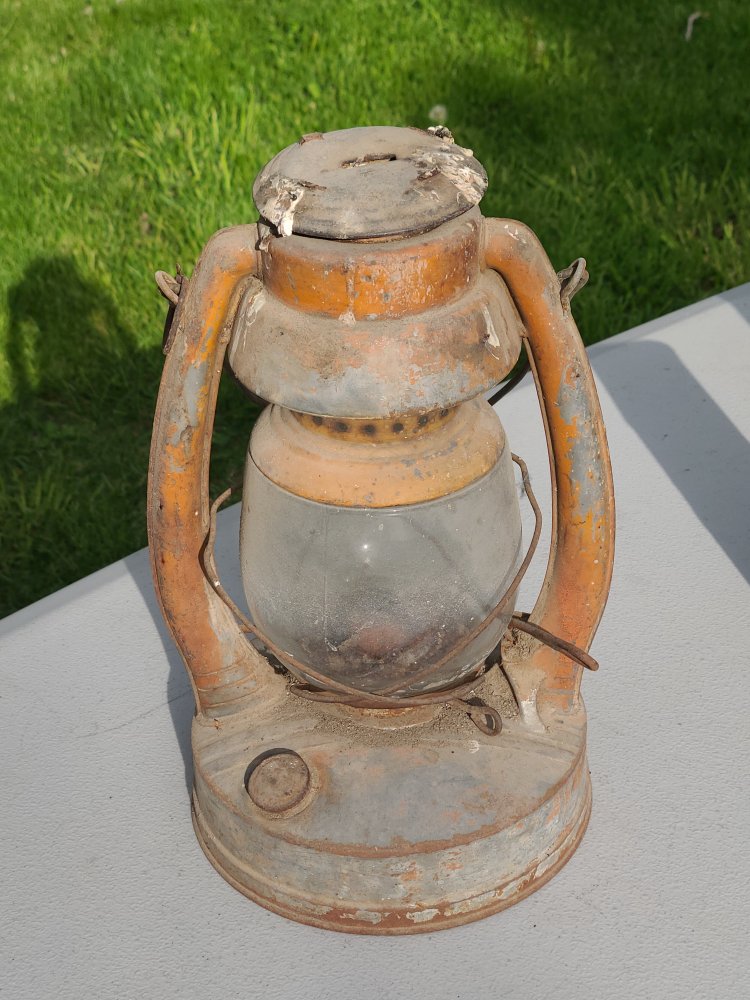 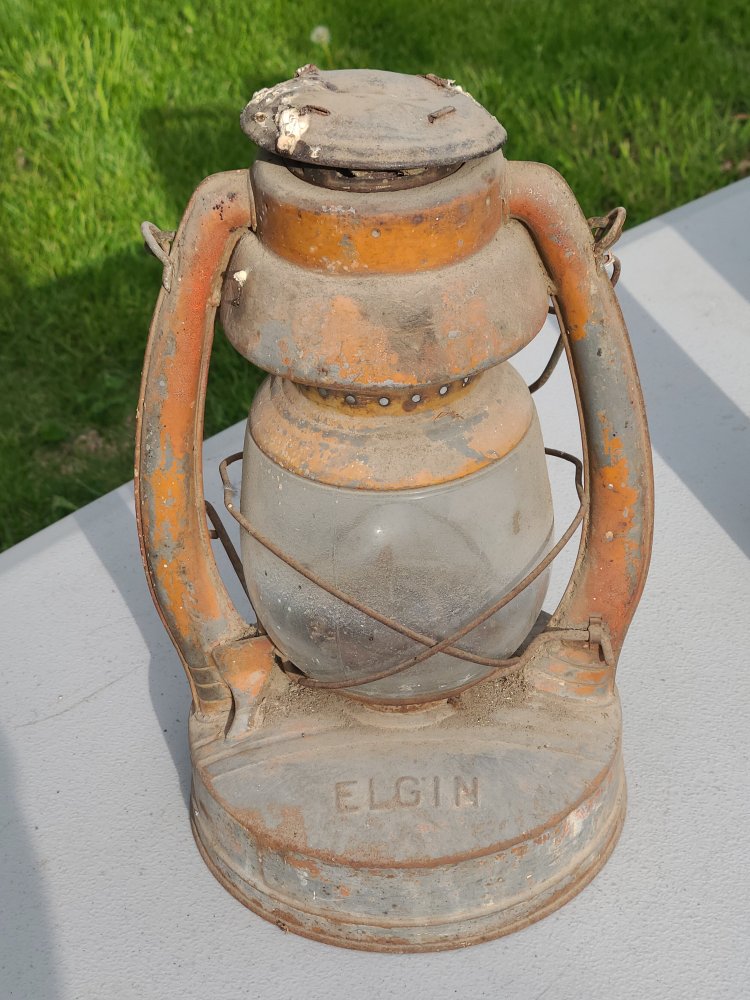 I know nothing about these, the controls seem to work and the tank is clean and sound though.
Last edited: May 10, 2021

Those are cool...and very collectible. Basically just a wick dipped in lamp oil. I have a couple Dietz oil lamps and one old German made one... you know for emergencies...... I could supply my entire neighborhood with light during emergencies and have lots left over

Shran said:
Those are cool...and very collectible. Basically just a wick dipped in lamp oil. I have a couple Dietz oil lamps and one old German made one... you know for emergencies...... I could supply my entire neighborhood with light during emergencies and have lots left over
Click to expand...

Yeah, I have a hurricane lamp on my dining room table, I figure the principle is similar to that.

85_Ranger4x4 said:
Yeah, I have a hurricane lamp on my dining room table, I figure the principle is similar to that.
Click to expand...

I have 4 Dietz oil lanterns for emergencies or camping. I bought them brand new just a few years ago. That's in addition to the railroad oil lanterns I pictured earlier in this thread.

Shran said:
Those are cool...and very collectible. Basically just a wick dipped in lamp oil. I have a couple Dietz oil lamps and one old German made one... you know for emergencies...... I could supply my entire neighborhood with light during emergencies and have lots left over
Click to expand...

Most of the neighbors on my block who have been around for many years usually call me in situations like that. It was not until after Hurricane Sandy that they actually asked what they should buy to prepare themselves, instead of borrowing from me. Don't get me wrong, I don't mind lending to neighbors who I am friends with. However, when the ones who never wave hello or give you the time of day are suddenly your best friend, that's different.

Found a garage sale on marketplace, could see a dark green 80's or newer stove poking out of a box so I go check it out. Box had been wet so it had some surface rust on the outside, hardly been used and inside was clean. It had the owners manual and a 1988 Coleman catalog/brochure that goes thru everything Coleman was making then in the box too.

So I go to walk around and think about it and the guy yells "$5 for the gas, stove and lantern!" from the garage. 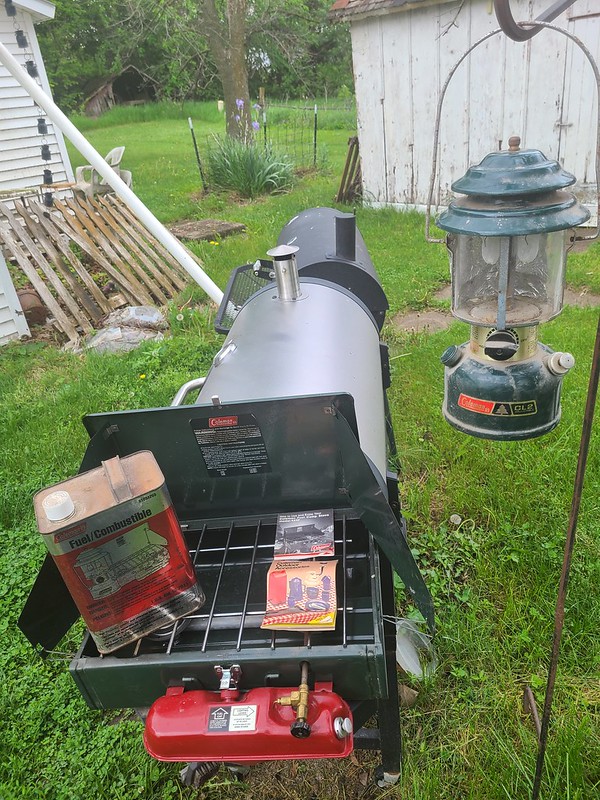 So anyway I have another CL2 now...

On my way home I was debating on fixing the lantern to either flip or gift.

It was mostly full of fuel so I give it a go, it starts spitting fuel. What the heck, I get a lighter and give it a try. 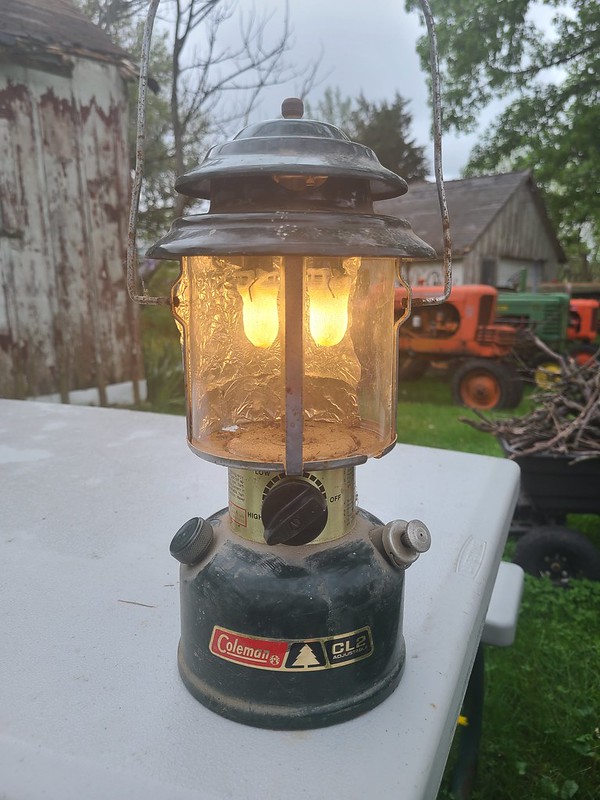 And it dims better than anything else I have!? 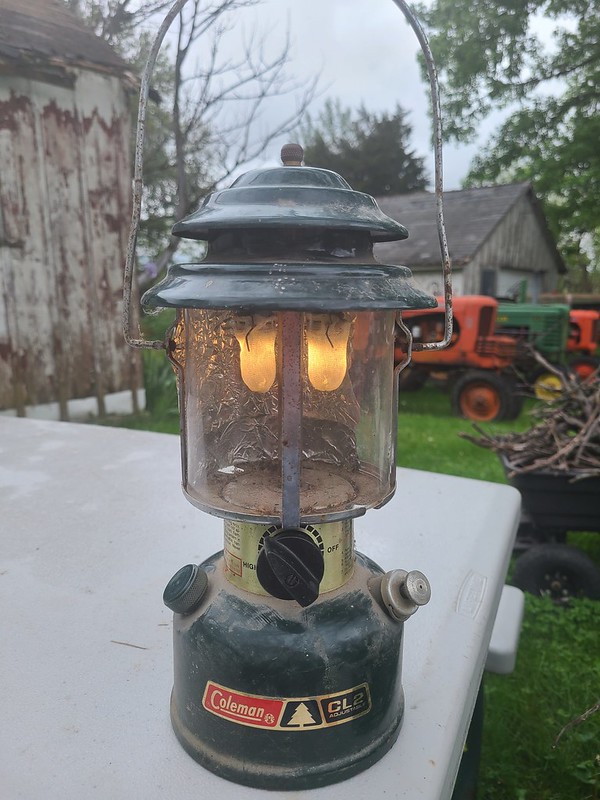 So yeah, 6-85. While it doesn't give a super awesome first impression it might not clean up too bad either. Still haven't decided what to do with it. 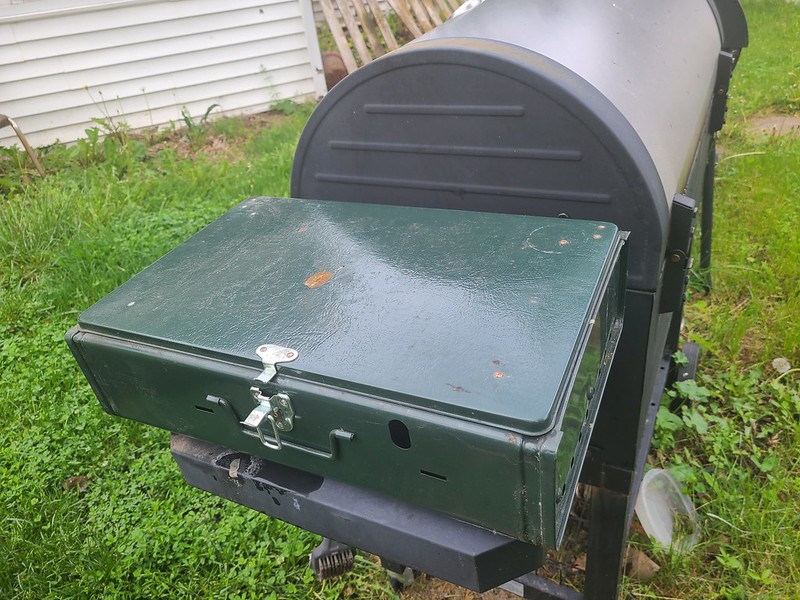 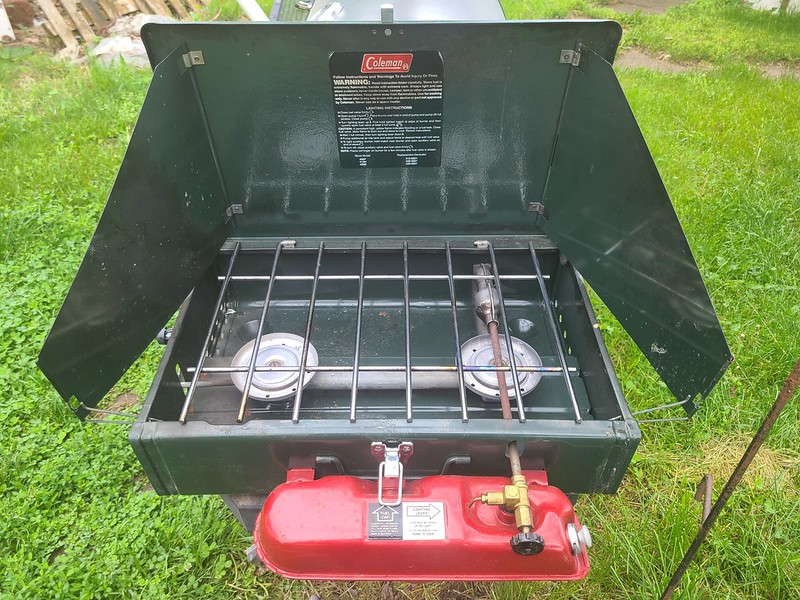 And the fuel can is half full.

So then I was waiting on my wife and trolling marketplace again and I find a red lantern kinda cheap. I notice the vent isn't right, actually read the description and it is a freaking milspec!

So I did the right thing and nabbed that too. 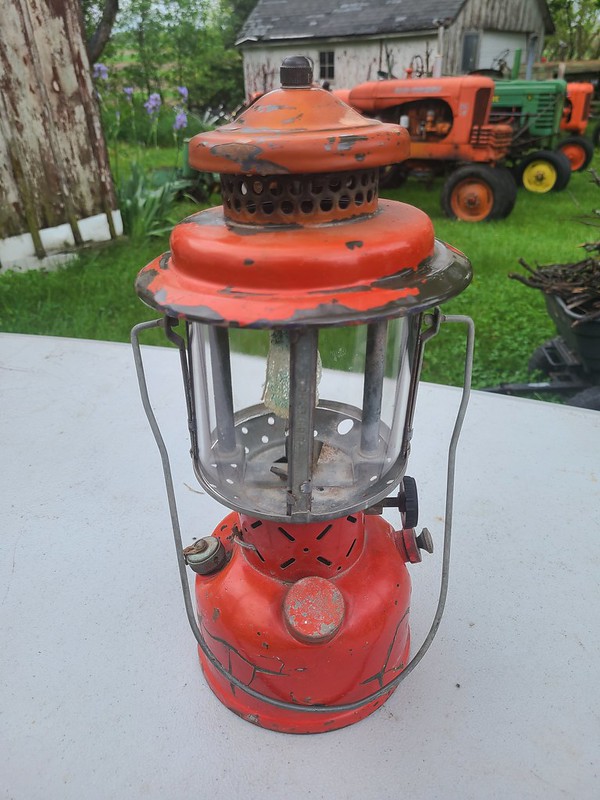 The thing has to be half again heavier than a normal 220 although it is a single mantle. Dual air tubes and of course the crazy gen. The "globe" is four curved panels that slide in tracks. I have heard they really are not all that great to use especially compared to a civilian lantern... I have wanted one since I got into the hobby and they are really scarce around here. 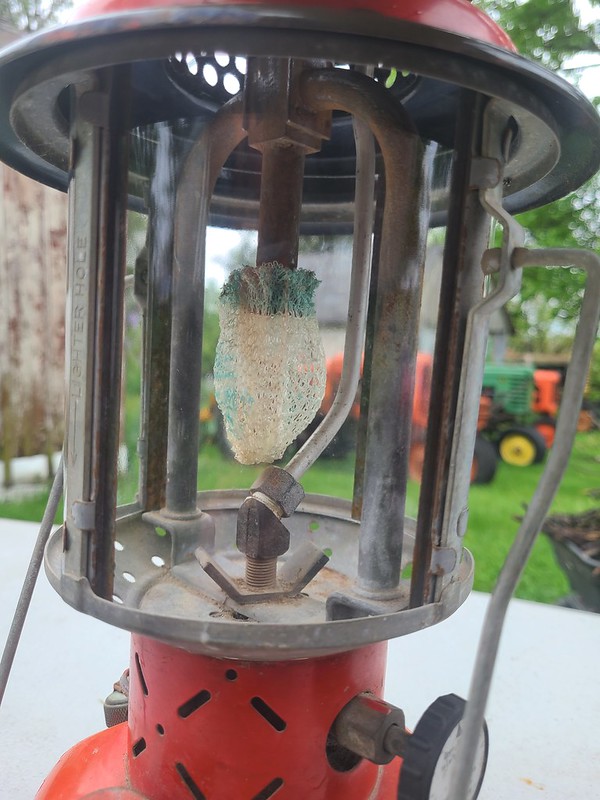 It isn't a showpiece but aside from the cap tether chains and missing funnel it is all there and should run again. Parts well had a new leather wrapped in wax paper (that I hate to use) a goofy wrench for the generator with a flip out screwdriver and maybe half a dozen Silk-Lites. Fount is dented and of course spray bombed so it kinda is what it is. Guy worked for the DNR, I shoulda asked if he got it thru them or if there was any kind of an interesting story with the red paint but didn't think of that until later.

1965 model, wonder what its military career was like... probably just sat in a box but it might have seen some duty as Vietnam obviously got started shortly after it was made. 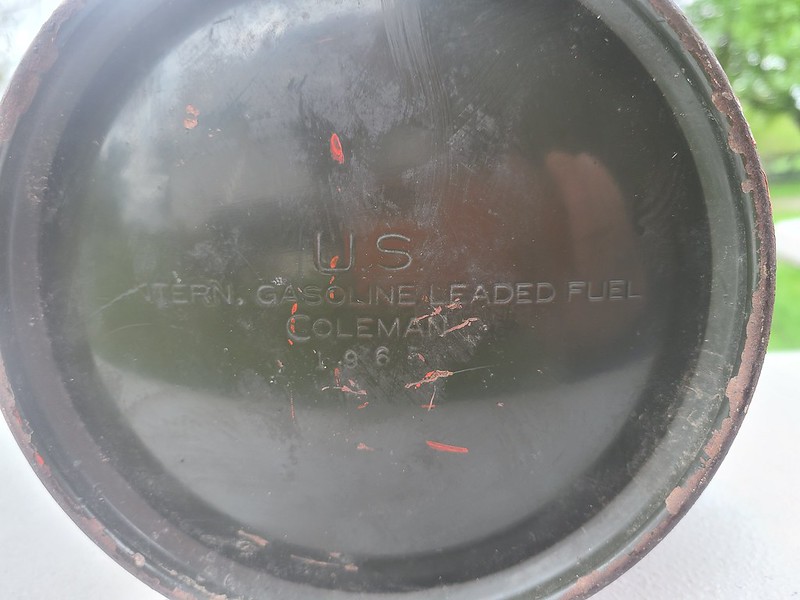 The pumps are dried up in both the stove and the milspec, I will try to oil as I am out of leathers but that seems to be a short term fix.
Last edited: May 22, 2021
You must log in or register to reply here.
Share:
Facebook Twitter Reddit Pinterest Tumblr WhatsApp Email Link