I have a 5.0 from a 96 Explorer that I parted out with most of engine related components I thought I would need when I originally intended on putting this in my 90 Ranger, which I'm now parting out due to too many project vehicles, not enough time or space (or money, for that matter).

I've also amassed most of the parts needed to put the V8 into my Ranger and most of the parts will still be used to put it into the BII:
M5OD-R2 from circa 90 F150 with
new slave, clutch and flywheel for 90 F150
Mustang Convertible engine mounts
plugs, wires, gasket set for the 5.0
New fuel pump for my 90 Ranger (doesn't cross reference to any year of BII, so this probably won't get used)
Explorer radiator
I will try to use my existing electric fan in the BII
8.8 from Explorer will find it's way under the BII, as well as the Dana 35 from the Ranger (this way the gears will match, 3.73s)
Other parts collected as well, just can't remember all of them off hand.

My original intent was to swap the Explorer V8 into my Ranger with the Explorer ECU so I can keep the DIS, and use as many existing parts as possible to keep the costs down, which ironically would require me to purchase a tuner to disable the rear O2 sensors and the tranny functionality of the computer, but this would allow me for future expansion if I ever decided I needed more power.

So, basically, I want to just use the BII as the swap platform instead of the Ranger and purchase as few extra parts as possible. I want to put an Explorer 5.0 with factory electronics into a carbed 84 BII (probably build a box in the engine compartment for the computer). Is this the most difficult way to do this? It seems most people revert back to OBDI from 90s Mustangs to do their swaps. What problems should I expect?

I expect getting fuel to the engine to be the biggest change required to make this work. Can I just buy an external pump and new high pressure fuel line or should I try to scavenge the fuel system from the Ranger before I part it out? The pump I have won't work on the fuel tank in the BII since this is the 84 with the old style tank and if I bought a newer tank I would still have to buy a new pump since the Ranger fuel pump doesn't cross reference to a fuel injected BII. Also, the current fuel tank in the BII is brand new. Bought it less than a couple hundred miles ago (about a year ago) before I planned on putting a fuel injected engine in there.

What else should I try to grab from the Ranger that will help with this swap? I need to get rid of the Ranger before I start the swap on the BII due to the limited room I have to work/store vehicles.

I could also just take the EFI off but I like EFI for driveability and fuel economy. Also, I think making this a carbed engine might be more expensive at this point since I would have to get a distributor and a new intake manifold (I have a 2150 with 1.21 venturi that could be used) and other miscellaneous parts.

I had started a thread over at BII corral but it doesn't look like it gets much traffic over there: 84 BII with 96 Explorer 5.0

I'm also not sure that link will even work. But it's the link in my signature.

I've got the new fuel tank/pump and fuel lines into the B2 as well as the new master cylinders (both brake and clutch) from my 90 Ranger.

Next I'll be working on getting the engine and transmission mounted. 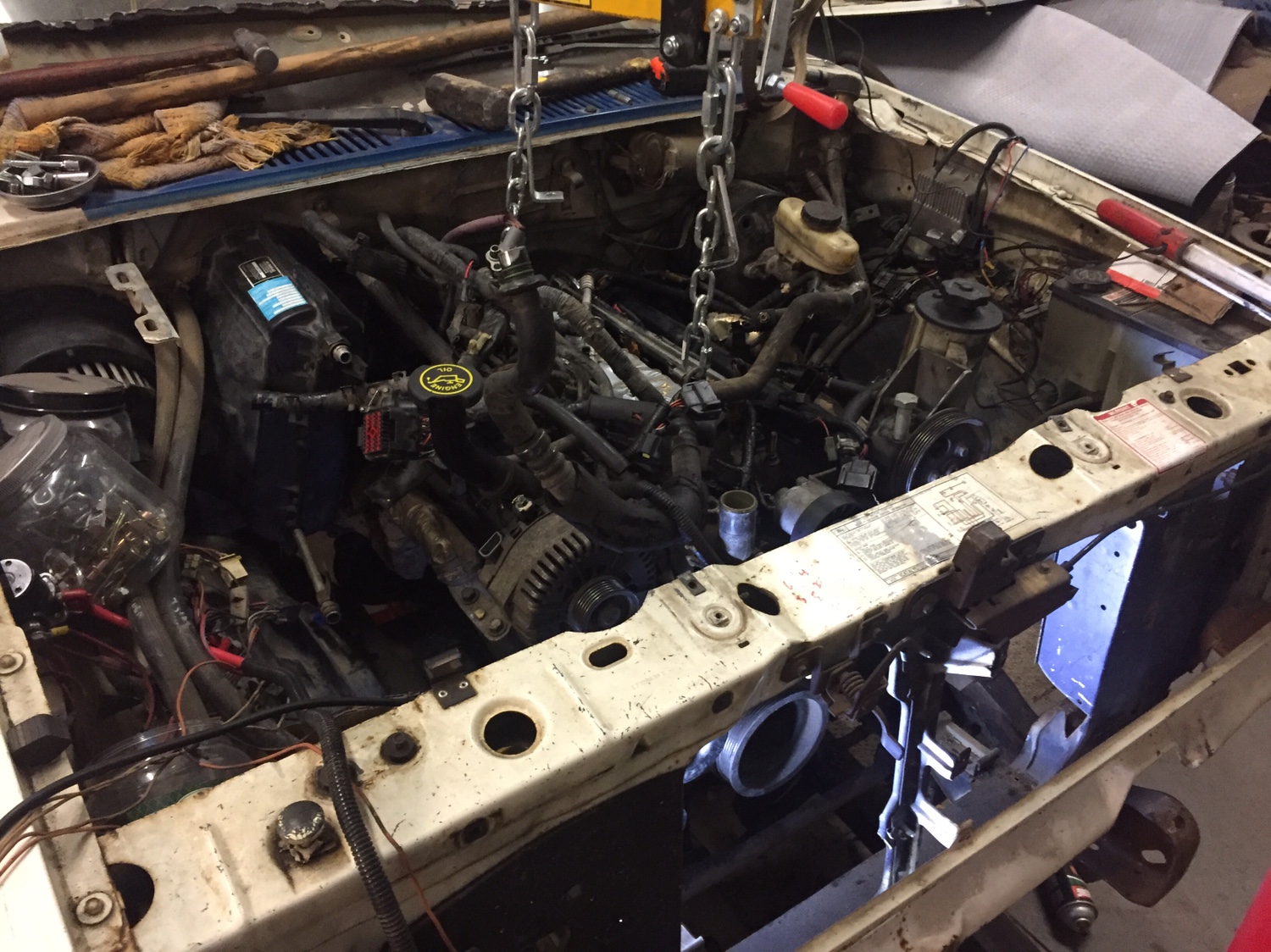 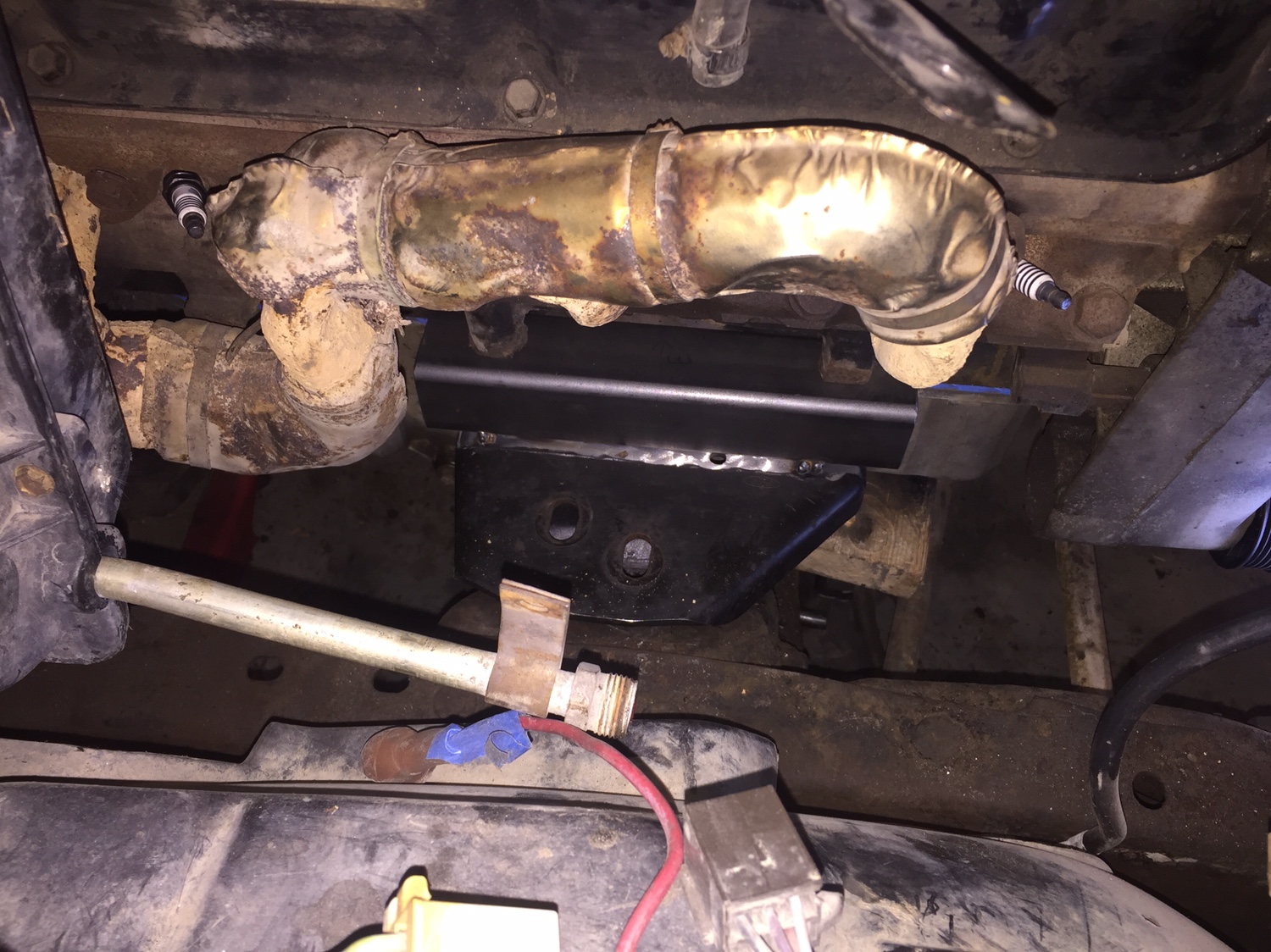 Picture of mount. Put 2" square tube between motor plates and engine block to get 2" more height I needed.

I also caressed the firewall and heater box to fit the engine, as most others have done, although the engine and transmission is not hooked up together yet so more may be needed.

Other fun stuff, some of it from the other thread:
Using M5OD-R2 from 90ish F150.
Sachs clutch and flywheel for 90 f150.
91-94 Explorer radiator
Not finalized on the fan yet but going to try to use aftermarket electric fan I had on my 90 Ranger (can't recall brand off hand)
87 BII fuel tank (larger opening for fuel pump)
87 BII fuel sender
90 Ranger in tank fuel pump (tight fit in the BII sender)
90 Ranger fuel lines/filter setup
90 Ranger clutch master cylinder
90 Ranger brake master cylinder/booster
PS pump on 96 Explorer engine (will probably need to use 4.0 pressure line from what I gather from a post I read by Ranger SVT)

I've also freshened up the seals and gaskets on the engine, everything I could replace without taking the heads off.

I'm probably missing some stuff that I've already done so I'll post more if I think of it. Although, this is a pretty run of the mill swap with the exception of the fuel tank/lines I'm swapping in. I don't think most people chose to use this method.

I removed the tubing I was using as a spacer between the block and the plates. I'm going to move the engine mount outward (and therefore up) on the engine crossmember to get the roughly one inch I'll need to get the engine as low as I want it.

Up until 90 the efi B2 used a dual fuel pump setup, in 90 it went to a single in tank pump. I plan to use a 90 tank and sending unit in mine and just run new plastic lines.

I am also converting to a 87 Mustang 5.0 wire harness and will run it on the stock speed density ecm. Im a big fan of MicorSquirt stand alone efi set ups and do my own tuning so this will allow me down the road to do a plug and play ecm swap with no wiring mods needed should I choose to do so. I am however using a c4 trans so I will never need trans function control.

I bought most of my parts over 5 years ago when I originally was going to swap the 5.0 into my 90 Ranger which I no longer have. The transmission went out one morning leaving for work so I pulled it into the shop to start on the engine swap and as I was pulling back the carpet to remove the shifter I realized the floor pan was no longer connected to the body and decided it was time to let it go. I didn't have the space, time, or money to keep dragging that pickup along. At this point I decided to put it into my B2 which had a pretty decent body but 2.8 never ran quite as well as I wanted. So I reallocated all the purchased parts and some parts of the Ranger to the B2, just needed to buy a new fuel sender, as the B2 and Ranger one weren't compatible.

I'm going to try and keep the Explorer fuel injection setup. The hardest part to overcome is going to be tricking the ECU into not caring about the lack of transmission. I don't know exactly how yet, but I'm hoping I can find a way to do it without buying a tuner, as I really don't want to spend the money.

I kept the stock Ranger A/C heater box, just extensively modified it to get the valve cover to nestle in there.

Just my $.02 but if your not using the Explorer auto trans I don't see why you would try and use the Ex harness and ECM just to keep the DIS. A Mustang harness and ecm whether it be MAF or SD would run it perfectly without all the headaches your facing.

Who knows, I may end up using a mustang engine control package but if I didn't at least try it the hard way first I'd always wonder whether it was possible. Plus, if I can make it work, it'll be less money out of pocket to do the conversion since I already own all the hardware I hope to need.

bummer I never seen this back in 14.


a stang pump can/will fit in there. its a pia but will work...not that it matters now:shok but you can mod the carrier simply with clamps and barstock. run the stang pump and build a wire bulkhead with nylon tube and stainless machine bolts. run the return in the fill hose or a bulkhead fitting.

but if money is not an issue I would rather run the stock 89 b2 fuel tank and sender setup for ease of use.


you prefer the edis ignition? it will run with the manual, but have codes.


I suggest to invest into a moates 1/4 horse and hit some of their and other eec forums....tweecer and the like.

bummer I never seen this back in 14.


a stang pump can/will fit in there. its a pia but will work...not that it matters now:shok but you can mod the carrier simply with clamps and barstock. run the stang pump and build a wire bulkhead with nylon tube and stainless machine bolts. run the return in the fill hose or a bulkhead fitting.

but if money is not an issue I would rather run the stock 89 b2 fuel tank and sender setup for ease of use.


you prefer the edis ignition? it will run with the manual, but have codes.


I suggest to invest into a moates 1/4 horse and hit some of their and other eec forums....tweecer and the like.

Bobby, back in 14 even if you had seen this it probably wouldn't have helped as I had most of my parts a couple years before that! I'm pretty slow...

The Ranger pump on B2 fuel sender is going to work pretty well. Using the Ranger fuel lines, it gives me a similar setup to the 90 B2 fuel system but using most of the parts I already had. I have an 18gph pump, same as was in most EFI 302 mustangs. And it's too late now, fuel pump and sender and lines are already installed...I say that as if I couldn't take it out in ten minutes...

Thanks for the suggestion of the 1/4 horse and Tweecer. I've looked at Moates in the past but haven't looked at Tweecer before, may be even slightly less expensive in the long run than the 1/4 horse since it looks like you can more easily write your own tunes.

Got the transmission crossmember modified and put on. Had to modify it to lower where the transmission mount sits by about 2". I also clearanced where the front driveshaft would go, it looked like it would have hit. I added plenty of girth to bottom side, basically reversing the cross section to the bottom half. 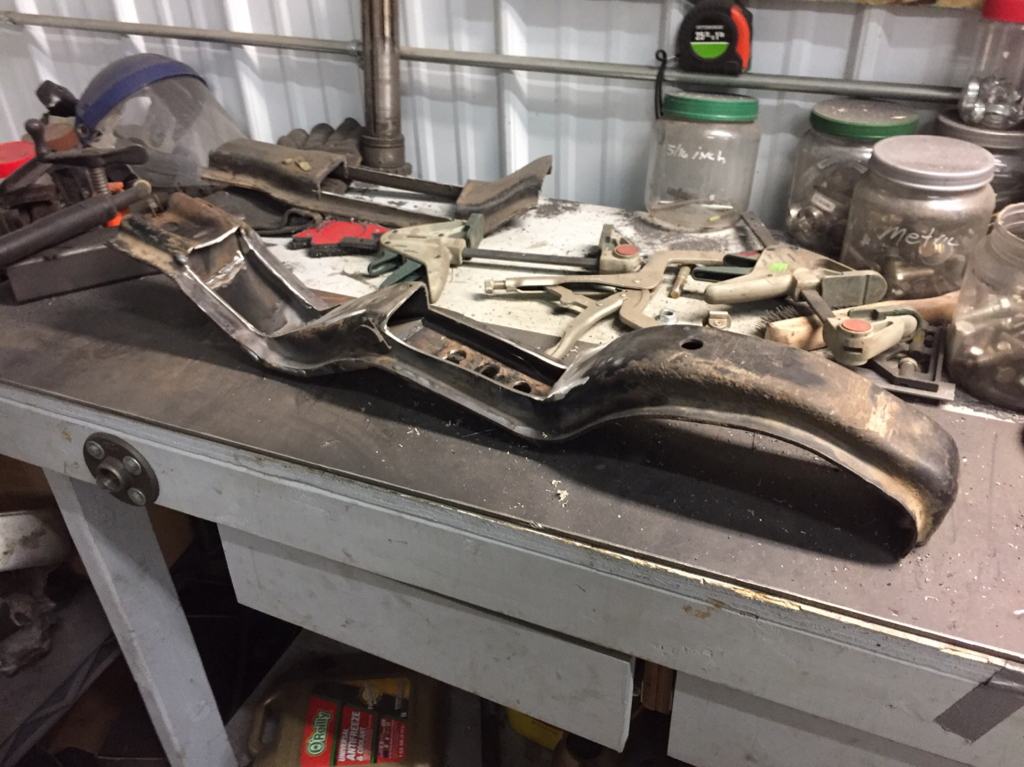 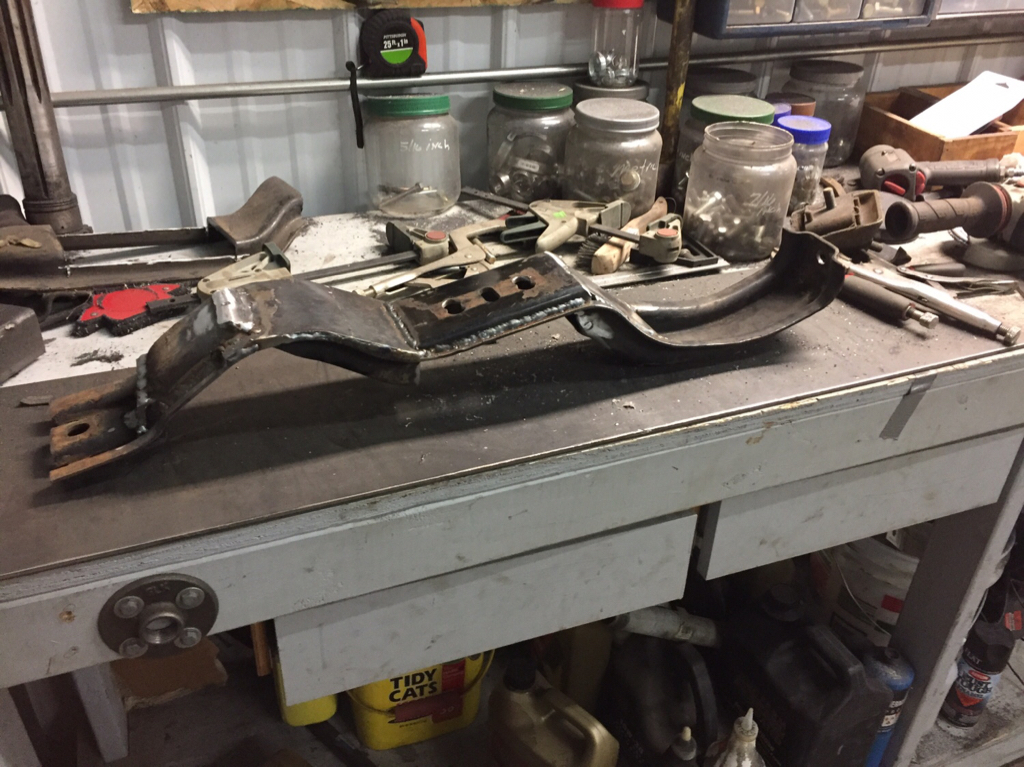 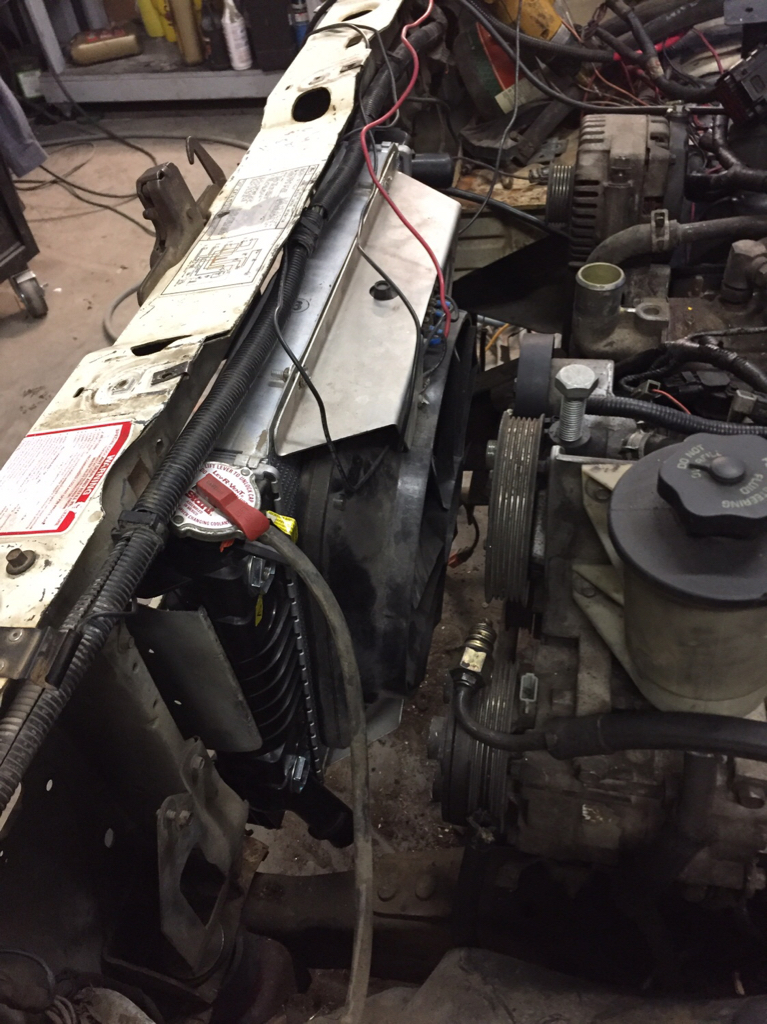 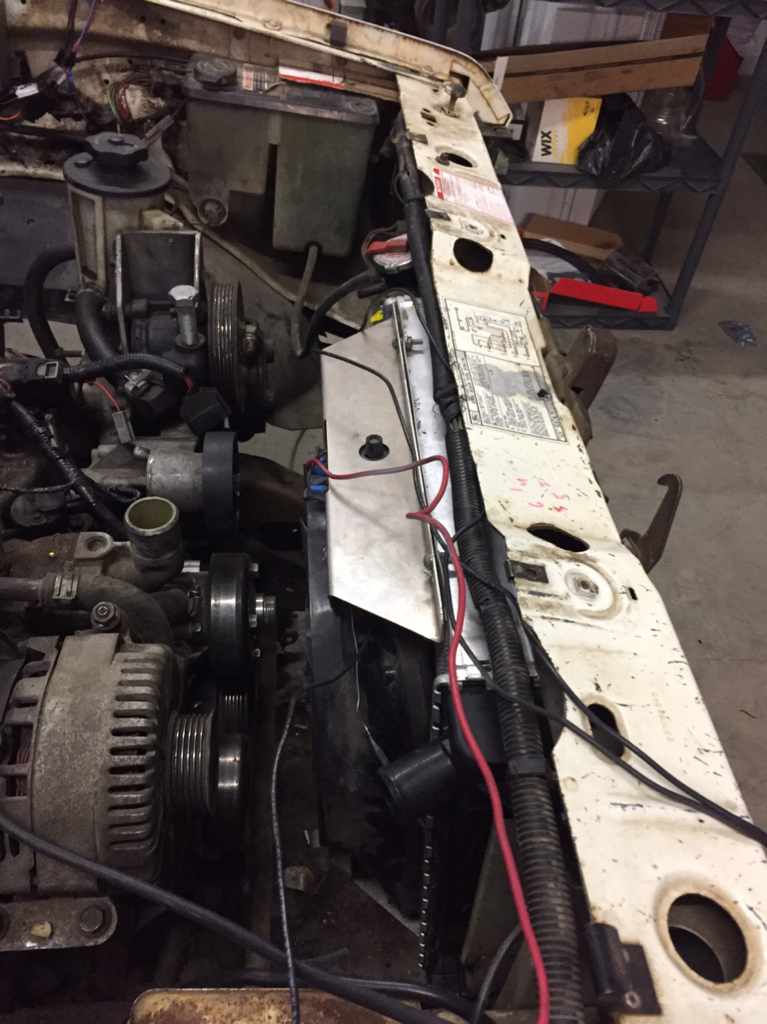 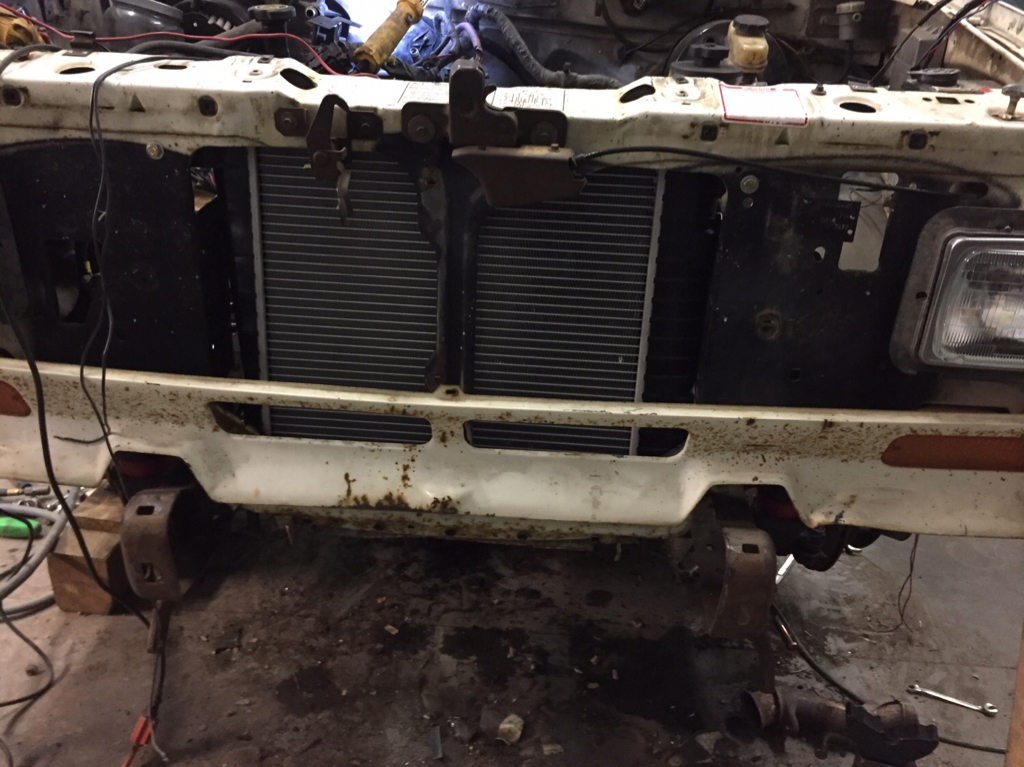 I also realize now that picture of the crossmember wasn't the final version, I thought I took a picture when I was done with it but I guess not. I added more material and corrected the angle of the horizontal frame mounting tab to make it parallel to the transmission mounting pad.