ExploreNW said:
Confirmed! Got the CJB out. It's in there. I found a sketchy site & grabbed the wiring diagram for the fuel system. Did not want to pull 57 solder joints, nope, not that comfortable. Not ready to trust one from a JY or Ebay yet either but I would not rule out a cracked board. Power lock remote quit a few weeks ago followed by the latest TBC issues. For the temp fix I just need to go get a $10 relay breakout box now.

This will probably cause CAN issues and/or make the PCM feel all sad and alone.

I'll find a way to scan & post my wiring diagrams when I'm done if this is the fix. Looks like the 04 return system is the last year to have the replaceable relays. In 05 Ford went to a returnless fuel rail on the 5.4.
Click to expand...

Remember, you have a FPDM in the system--That Network/ Can system, is a vital information source, between modules--Your going to want this working.

@acsnowrider would you mind elaborating a bit? In my thoughts, if the control wire "D" directly connects to Pin 5 on C1381a (PCM con #1, see thumbnail for that pinout) and if relays are just single pole non-variable switches, then the PCM is likely getting info from the pump power circuit at the FPDM signal ground instead of over a control wire. Bypassing the internal relay with an external one does not seem like it'd affect the operation of the FPDM. That is if using the same lines in/out of the CJB as the stock relay. The control wire should only be an on/off to fire the relay & power the system up. If there is a circuit between the PCM control pin and relay either it may be the problem itself or it may throw a code. Either way it seems the truck would still run with this bypassed as the PCM can still control on/off power to the pump and driver as well as regulate pressure directly to the driver.

CAN is a ****er sometimes, I agree. These systems probably aren't sophisticated enough to back-feed data up a wire. 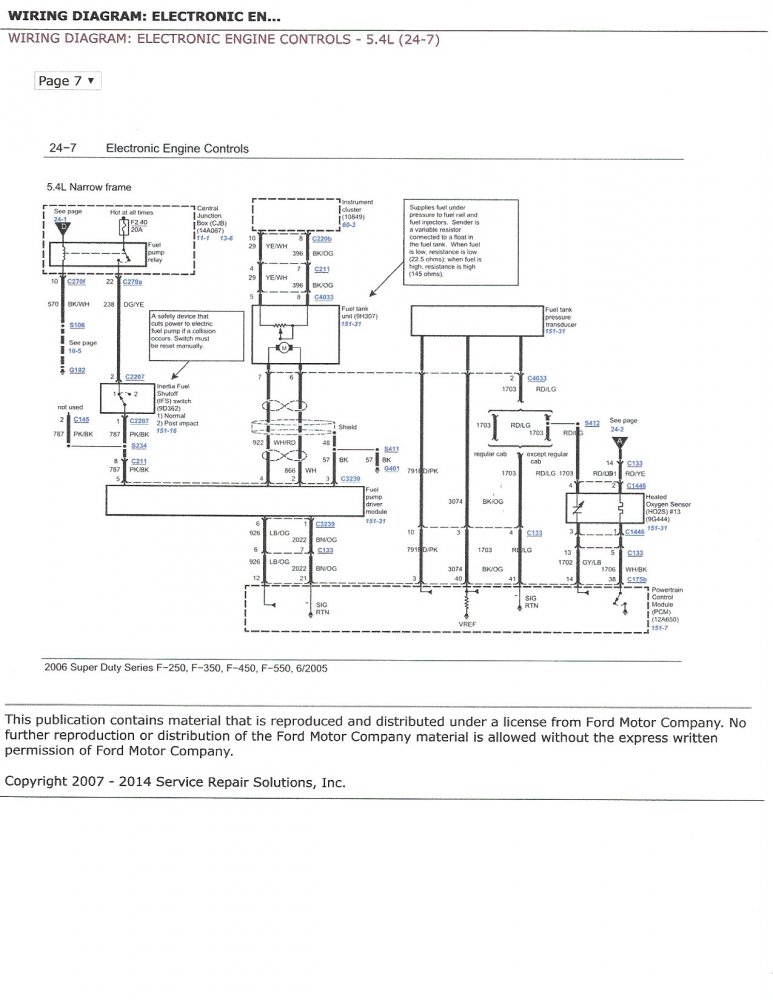 CAN is a ****er sometimes, I agree. These systems probably aren't sophisticated enough to back-feed data up a wire.

Just remember, that this is just one picture/page, in a much larger book! Your focusing on just getting the Fuel pump to run, and your idea will "probably" work, but if Ford could have "eliminated" the CJB easily, they would have. The FPDM is just a "variable" relay--I would just look at the percentage, of application to the F/p, and could tell if the pump was bad, or not. Further diagnoses maybe more difficult, and the secondary issues of not putting the box back in, you'll discover upon doing it--"Experience" is what we get when when Knowledge, fails us! You've probably spent a lot more money, than you wish at this point, but if your on to a solid solution for this, fixing this one item correctly, could give you a reliable truck, that you may decide to used longer than you intended
Click to expand...

I understand what you mean. At this point it's been several big bills. 3 grand alone for a diagnosis & PCM replacement less than a year ago. Several more into excessive replacements of FPDMs and pumps as well as new wiring & connectors. It's just gotta run long enough to get traded in. It has nearly 200,000 miles on the clock & its beat to hell. The bell tolls for thee, 5.4...

I hear the Ecoboosts are just awful. I've heard from several guys saying its in the shop every 3 months, thing gets a warning buzz that says something cryptic like "change oil" and back on jacks it goes. Constantly needing just oil and filters every 10k miles and all. Think I'll steer clear of those

As for the CJB, we've had those for years - used to just be plain in-cab fuse panels. Easier & cheaper to solder pins & connectors on a board than make all the old school wiring connections but apparently it's very hard to make an important piece of the system replaceable. When I worked a Ford parts counter I saw tons of these 14A067s move to the tune of around $499 to $700 depending on who's asking. Sounded like a revenue generating stream to me, and not to mention no one ever made aftermarket CJBs. Never really knew/paid attention to what they did until these issues started... I just figured they were an overpriced fuse box.

I'd encourage you to take another look at the pic, the LB/OG and BN/OG wires from the PCM go directly to the FPDM which then in turn regulates the 12V its getting through the relay in the CJB. It appears the relay circuit in the top right is just 12V on/off. It might even just be running off of a regular hot/start/run line which would have the 2-sec prime controlled via the FPDM rather than CJB relay.

The fix is in! A fuel pump relay was installed into a relay breakout. The cheapest kit is an airhorn relay kit, so long as it's a 20a ISO relay you are fine. Total cost is less than $35. Make sure to keep continuity on the DG/YE wire, don't leave the CJB end hanging with a wire nut on it. When the onboard FPR works, that circuit triggers the accessory delay relay, so you'll need to feed power back to it from your new relay. You'll lose your dome lights, radio, and power windows otherwise.
You must log in or register to reply here.
Share:
Facebook Twitter Reddit Pinterest Tumblr WhatsApp Email Link