Rebuilding And Improving A Ford 4.0 Engine 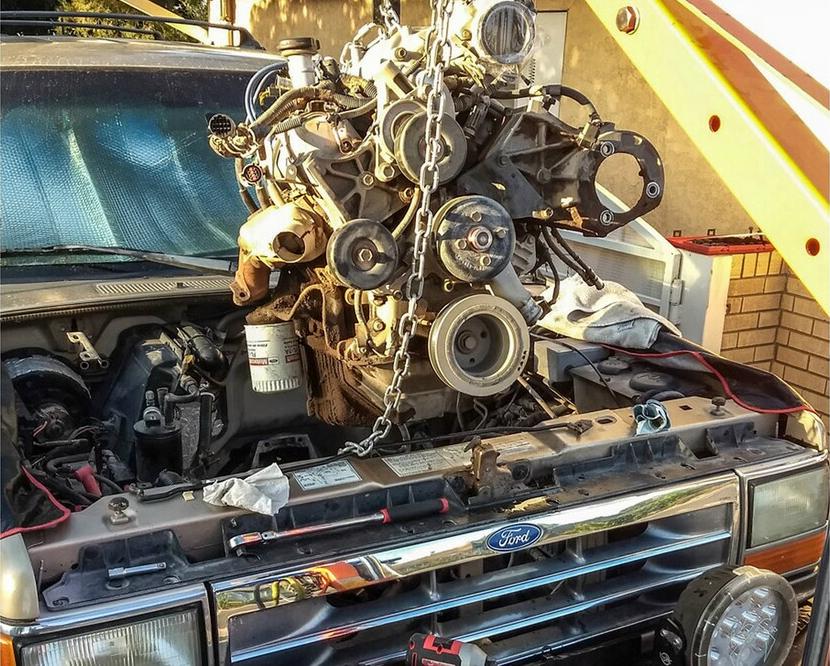 Tick. Tick. Tick. That’s the sound our Ford 4.0-liter, over-head valve (OHV) engine was making in our 1991 Ford Explorer after 250,000 miles. The Ford 4.0L V-6 engines, built in Germany, are found in Ford Explorers and Rangers through the year 2000 when production of the OHV engine stopped and the concurrent 4.0-litre SOHC engine took over. With proper maintenance, these Ford 4.0L OHV V-6 engines are reliable and ours had powered us on many adventures deep into the backwoods and desert without any worries. There are a few common problems associated with Ford 4.0L OHV V-6 engines though and we were seeing signs of them, namely valvetrain clatter and coolant consumption. It was time to bench our Explorer from future trips until we could address them with an engine rebuild.

The first common issue we faced with our Ford 4.0L OHV V-6 was the valvetrain ticking and clattering no matter if the engine had been running for an hour or just started cold. This is typically diagnosed as lifter noise; however, it is more often a result of wear on the pushrods and both sides of the rocker arms that result in excessive play. The pushrods are solid, so oil delivery is handled through the rocker arm rail, fed by the center post through the cylinder head, and small holes in each arm. Due to the movement and restrictions through the system, oil doesn’t always reach where it needs lubrication the most. To fix this issue, all new pushrods, rocker arms, and a high-volume oil pump were added to the growing parts pile. The OEM-style parts have small design upgrades in material and oil passages to improve lubrication and longevity. The hydraulic roller lifters can also malfunction but the excessive wear on the pushrods and rockers are usually the culprits of the ticking (and much easier to replace!). 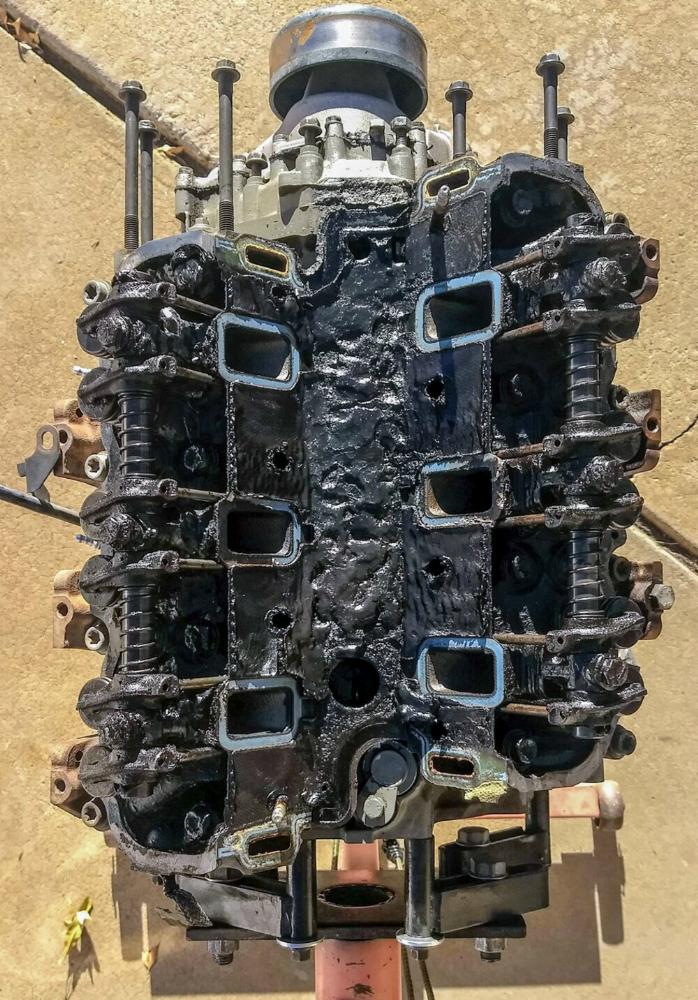 This is why you change your Ford 4.0L OHV V-6 oil regularly. Once we removed the lower intake manifold on our extra engine, we were met by a thick layer of sludge. Luckily, most of the sludge came off with the old gasket. It was at this point we decided to tear the entire Ford 4.0L OHV V-6 down to have it hot tanked for a clean start to our rebuild process.

Another common problem with Ford 4.0L OHV V-6 engines is the weak casting of the stock cylinder heads. The stock heads are very prone to cracks around the valve spring pads or between the valves in the chamber. The last time we had our passenger side exhaust pipe removed from the exhaust manifold we noticed how it looked like the inside was steam cleaned. That would explain our coolant loss over time going through the exhaust. Knowing that the stock heads were prone to cracking, we tossed them in the scrap pile and ordered up some aftermarket castings from Clearwater Cylinder Head on eBay which are made with extra material in those locations.

The plan was simple enough, buy an extra engine to leisurely rebuild the top-end and then swap it in over a weekend. These engines are plentiful in the junkyards and we found a donor from the same year as ours to begin the teardown process. We planned to replace some worn out parts along with new cylinder heads and reseal it. The goal wasn’t maximum horsepower but rather improved reliability for the next quarter million miles of adventures. Once we tore it down, the snowball effect took over and we replaced more than we were planning on. It all worked out in the end though, as we assembled a complete new engine for the same price as a remanufactured long block and we built it with the components we wanted. Follow along with the captions in our rebuild process as we got the snowball rolling. 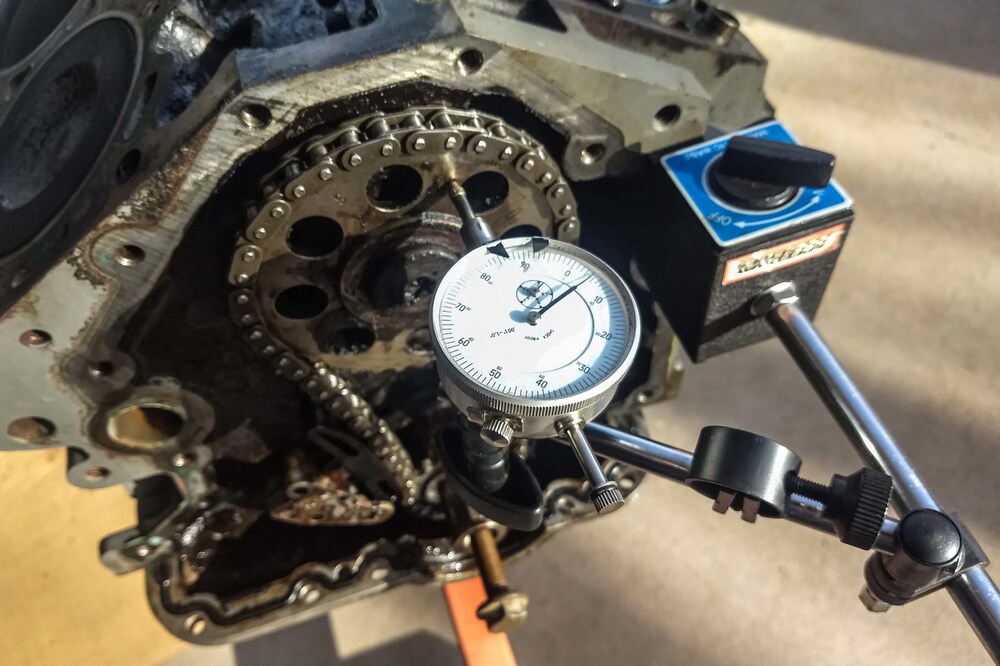 We continued tearing down the Ford 4.0L OHV V-6 engine while checking a few more items to make sure our rebuild engine was a good rebuild candidate. Tracking down a replacement camshaft thrust plate could be difficult so luckily ours was still in good condition and within the 0.003 to 0.006-inch endplay tolerance. 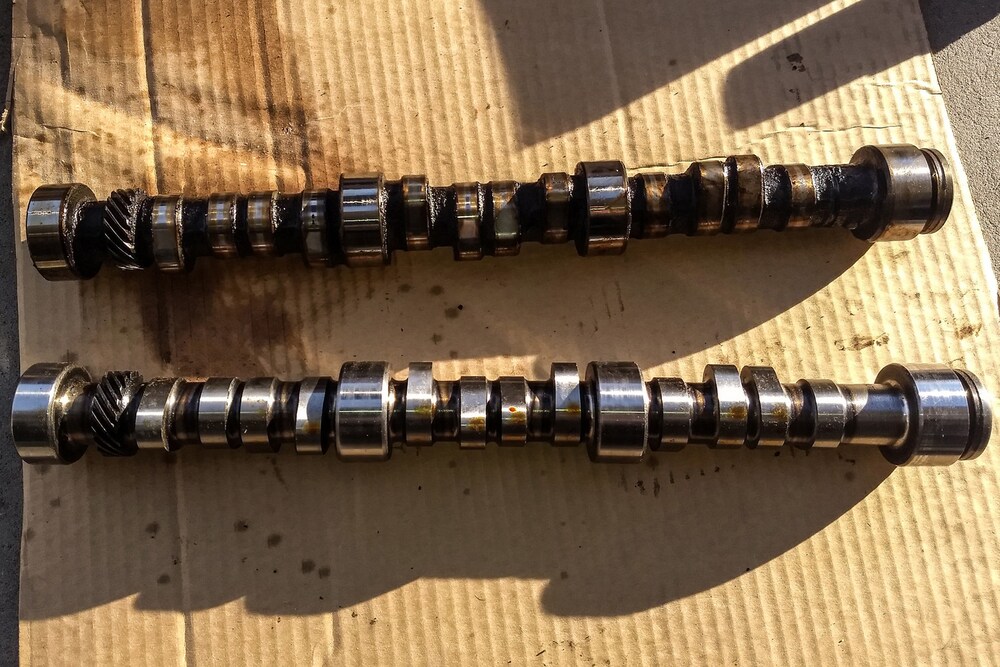 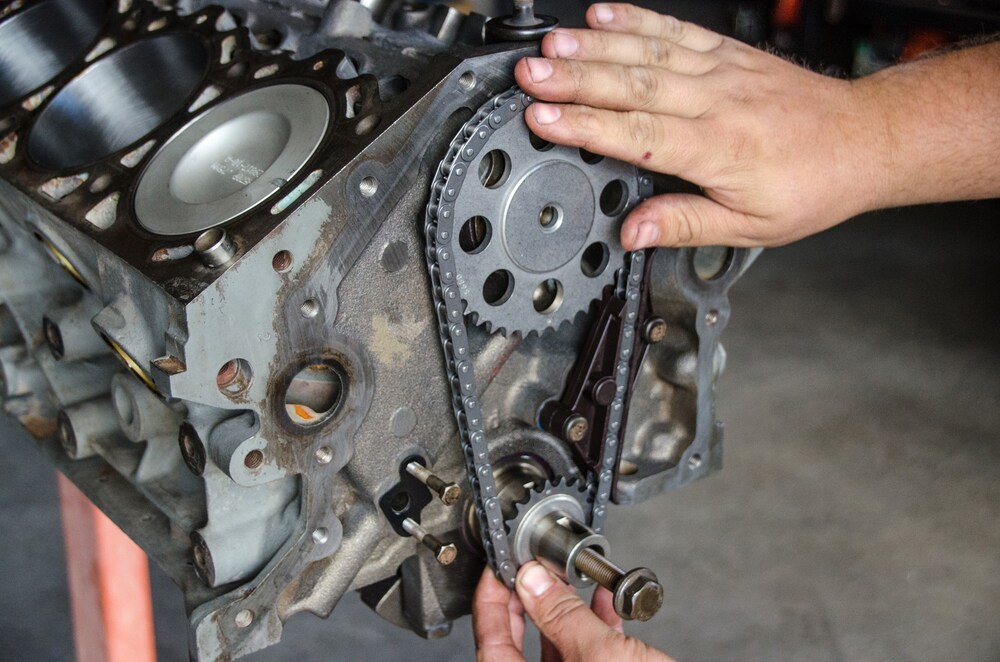 We didn’t get an inside look as our Ford 4.0L OHV V-6 engine made its way through the machine shop for cleaning and inspection. Our cylinder walls were out of spec so it was bored to use 0.75mm over pistons and all new bearings were installed along with our new camshaft and polished crankshaft. Once we got it back to our garage, we installed a new timing set from Rockauto, which was as simple as facing the two dots towards each other on the sprockets fitted in their respective keyways with the number one piston at top dead center. 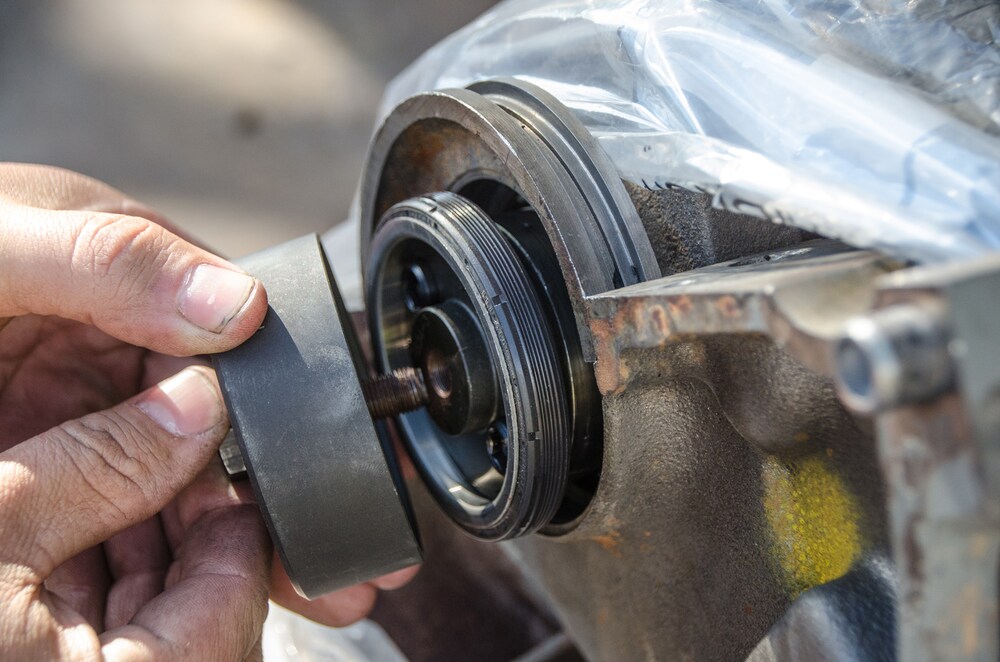 The rear main oil seal on the 4 Ford 4.0L OHV V-6 engines are notorious for leaking. It is claimed that the crankshaft surface is too polished and the normal oil seal lip cannot retain the oil on the polished surface. Ford fixes this problem using an oil seal with integrated steel sleeve that presses on over the crankshaft (PN F5TZ-6701-A). We sourced ours, as well as a few other seals, through eBay. It is important to use the correct installation tool to not damage the seal or crank as well as setting the correct installation depth. We used an OTC tool (PN 7834) to accomplish this. 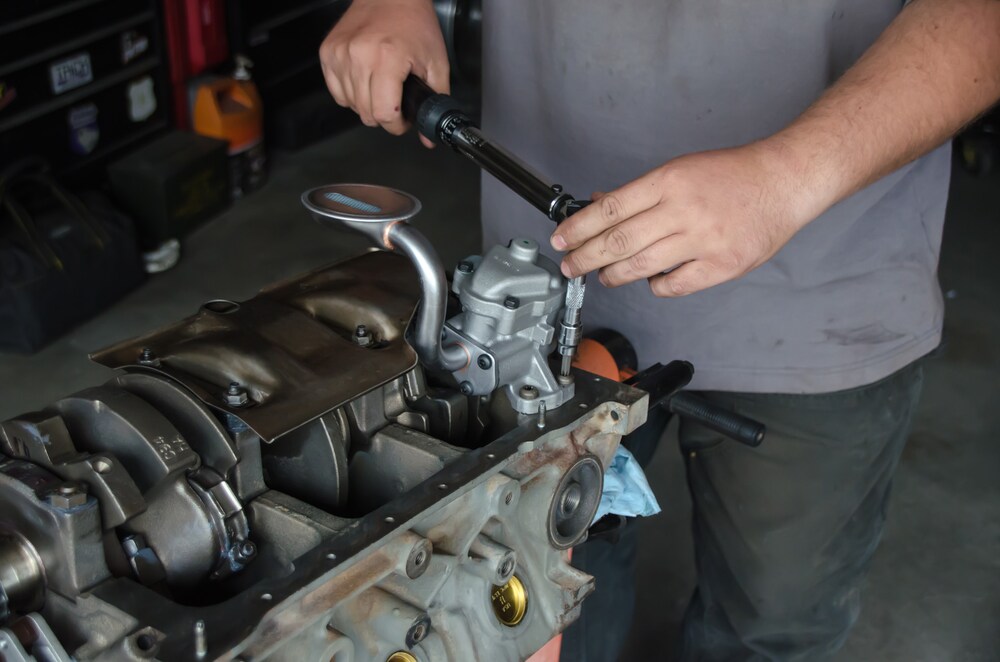 In order to keep the engine’s top end and rockers of our Ford 4.0L OHV V-6 well-fed with oil we chose to go with a Melling high-volume oil pump from Rockauto (PN M328). The oil pumps look the same from the outside but are fitted with different internals to boost the volume. It will be important to keep a close eye on the oil level to ensure the oil pan sump has enough to feed the high-volume pump as the oil gets pushed to the top and through the rest of the oiling passages. 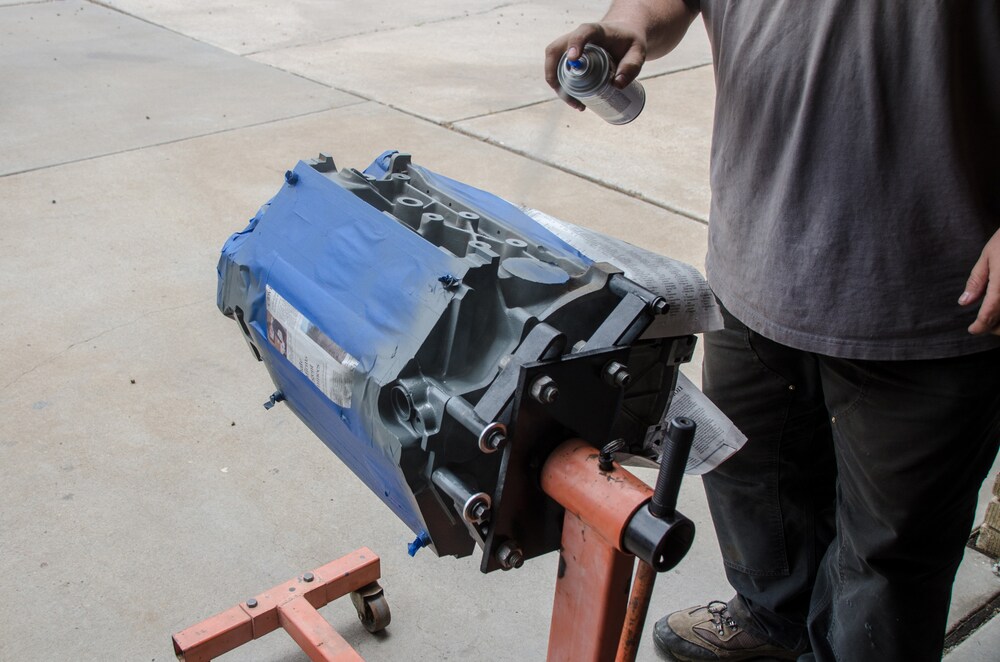 With the bottom end buttoned up and the oil pan back on it was time to make the Ford 4.0L OHV V-6 engine block look new. We carefully masked the exposed machined surfaces off and sprayed on a coat of Ford Gray engine enamel. The cylinder heads would get the same treatment. 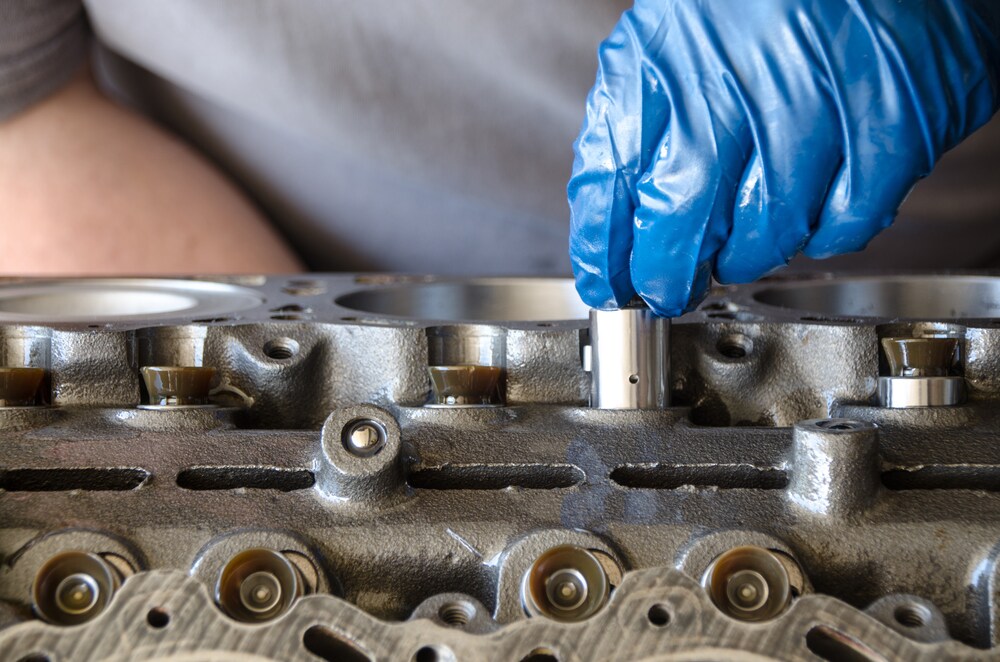 The Ford 4.0L OHV V-6 uses hydraulic roller lifters and replacing them is the single most expensive part of rebuilding the engine. The lifter has an inner and an outer body that can trap debris between them. It is possible to clean them but due to the sludge buildup in our donor engine we did not want to risk any trapped debris making its way through our new engine. Luckily, we found some new OEM Ford lifters that were sitting around for quite some time on eBay for a deal we couldn’t pass up. We soaked them in oil overnight and installed them just before putting the heads on. 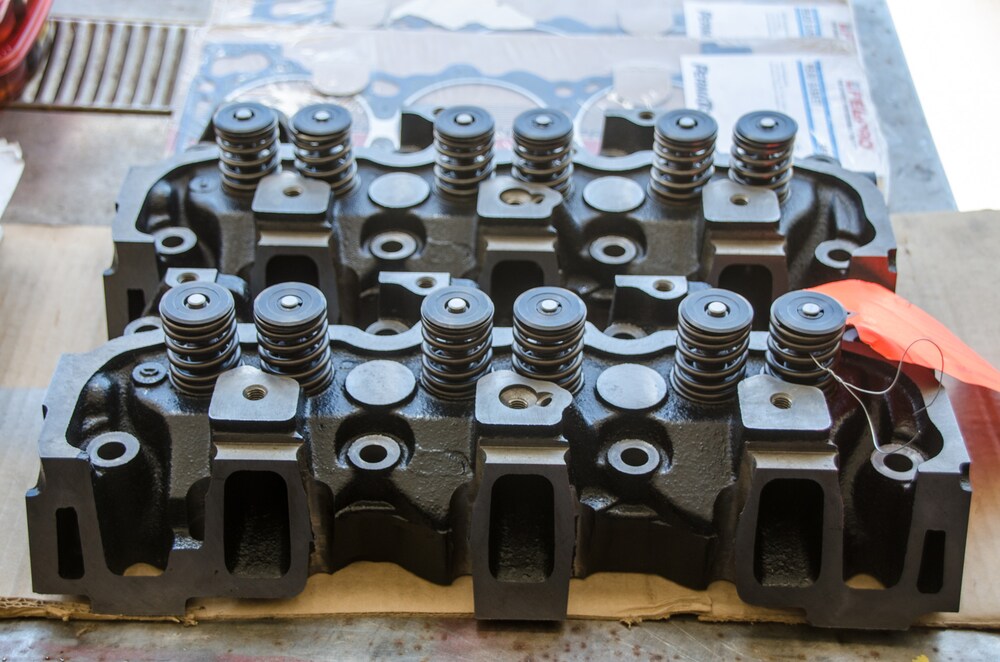 We ordered new aftermarket cylinder heads from eBay that came pre-assembled with brand new valves and springs. The new replacement Ford 4.0L OHV V-6 heads are casted with extra material around the crack-prone areas of the original Ford heads and do weigh a few extra pounds. While more expensive than reusing our donor springs and valves, the time saved was worth it. 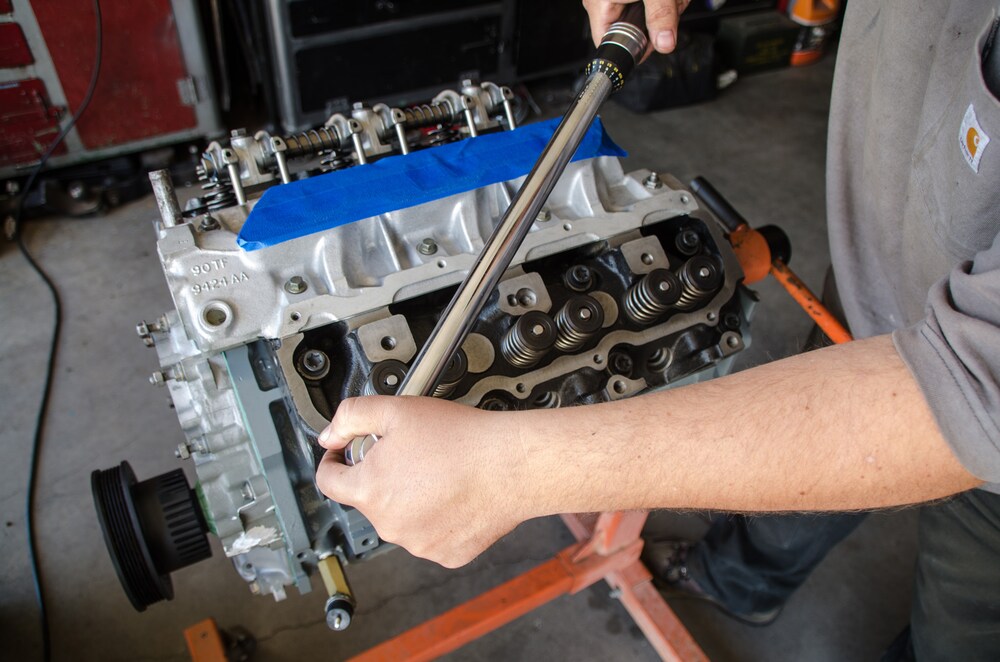 When both aftermarket heads are installed, they must be torqued in sequence with the lower intake manifold at the same time for the intake gasket to seal properly. We followed the shop manual guidelines through several steps before the last step of turning the head bolts an extra 90 degrees. New head bolts must be used because they are torque-to-yield (TTY) bolts that stretch when installed. 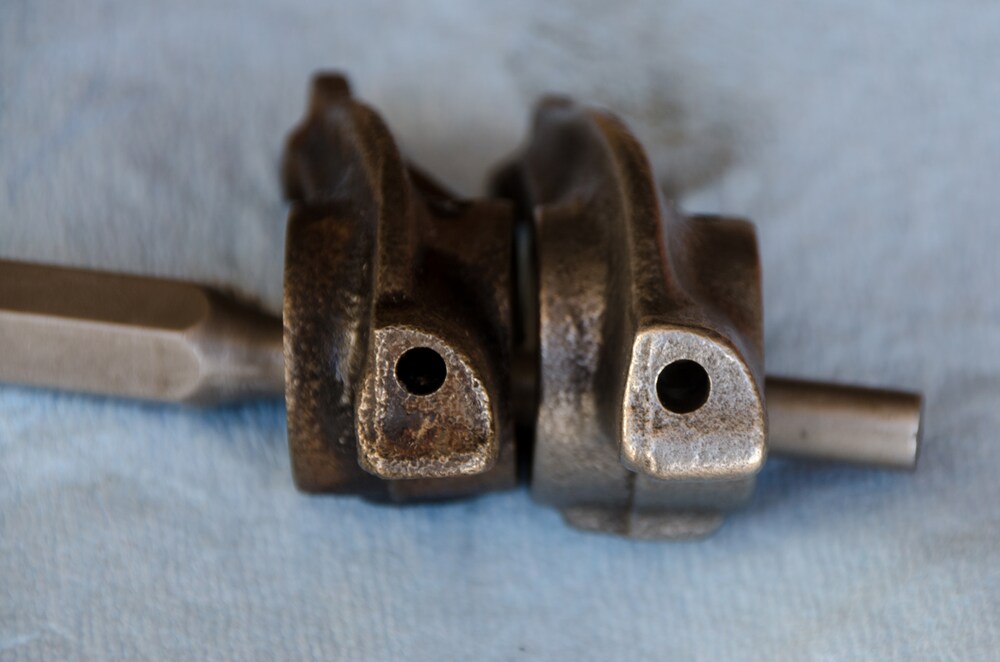 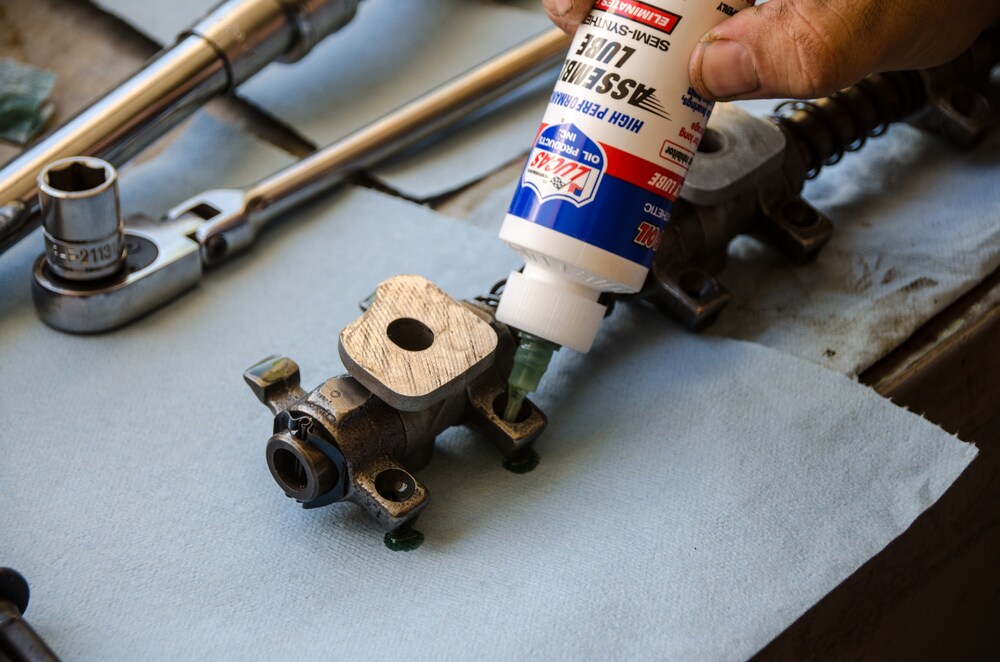 The oil sludge was cleaned out from the inside of the rocker rails and then reassembled with the new rockers. Assembly lube was applied to all contact points as well as to the bearings and moving parts throughout the entire engine during the assembly process. Pushrods were placed in the lifter cups and ball sockets of the rocker arms before torqueing the pedestal bolts down to the heads. 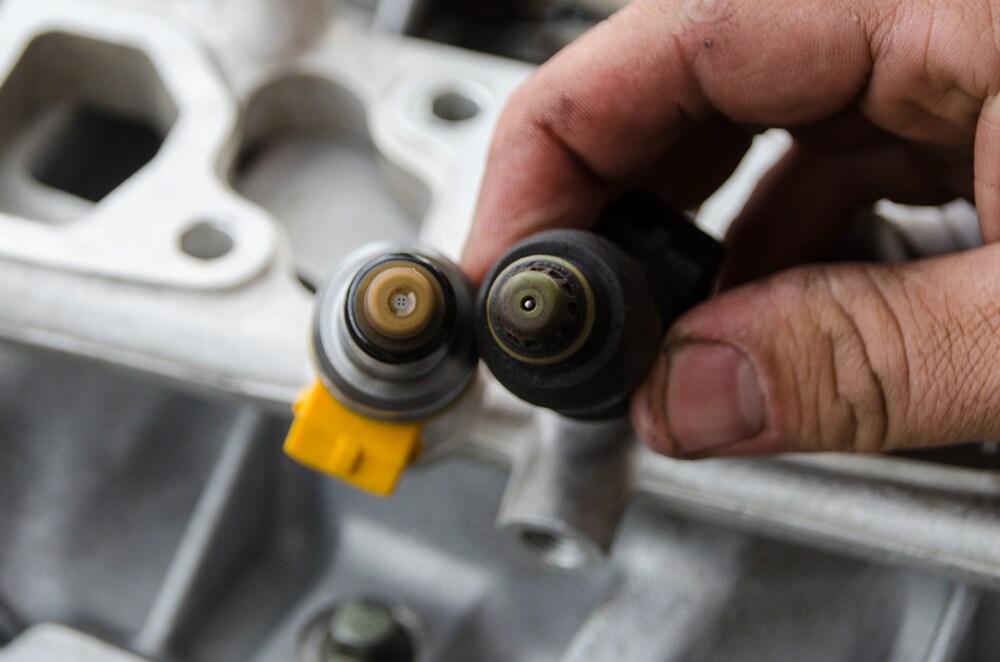 Our Ford 4.0L OHV V-6 engine was getting closer to being done and the snowball was getting rather large at this point. Might as well add some rebuilt fuel injectors to the mix! We went with a four-hole nozzle injector that were flow matched (left) over the single hole injectors we removed (right). So far, no efficiency gains have been noted by changing to the newer four-hole injectors. 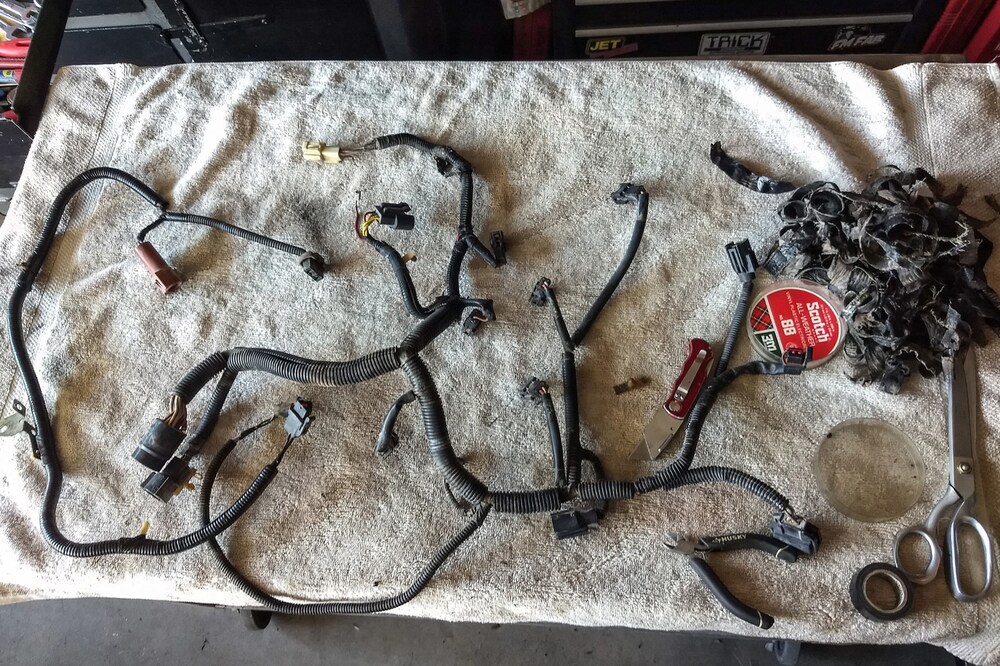 For good measure we stripped all the old tape off our Ford 4.0L OHV V-6 engine wiring harness and inspected it for any potential problems. With no frayed wires or missing insulation found, we wrapped it back up in electrical tape and laid it out on our engine to connect all the sensors and injectors. 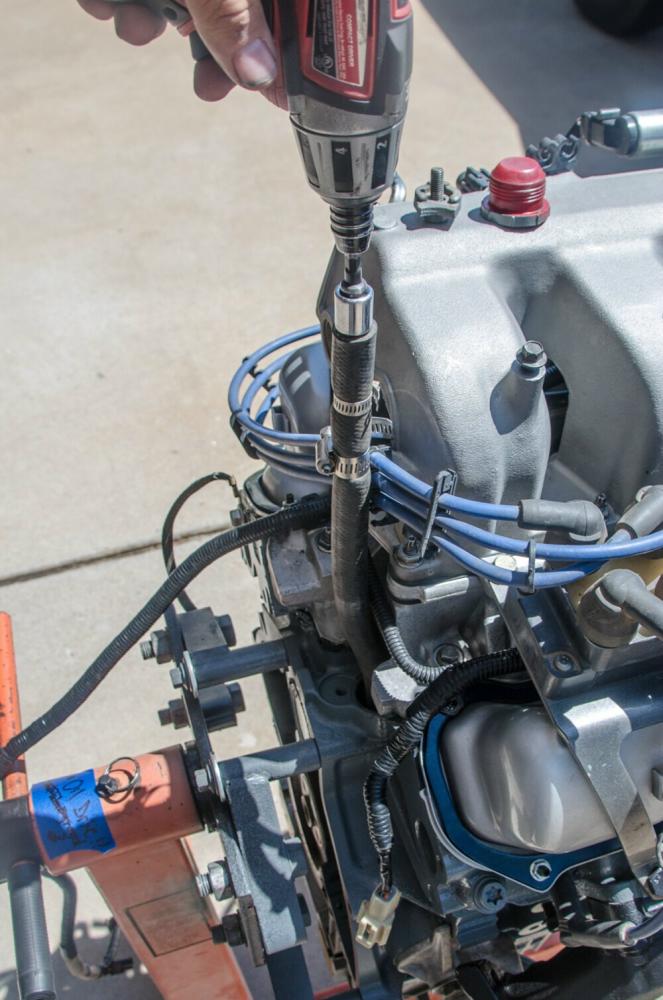 Just before we were ready to hoist the Ford 4.0L OHV V-6 engine into its new home, we primed the oil system with a home-made tool and electric drill. The 4.0L engine is a distributorless ignition system; however, it still retains access through a block-off plug in the back of the block to the cam-driven oil pump shaft. We fashioned a tool from a scrapped oil drive, piece of hose, and a socket extension to spin the pump. We also took this step before installing the valve covers to verify oil was reaching the rockers.