How To Build A Ford 4.0L For Power 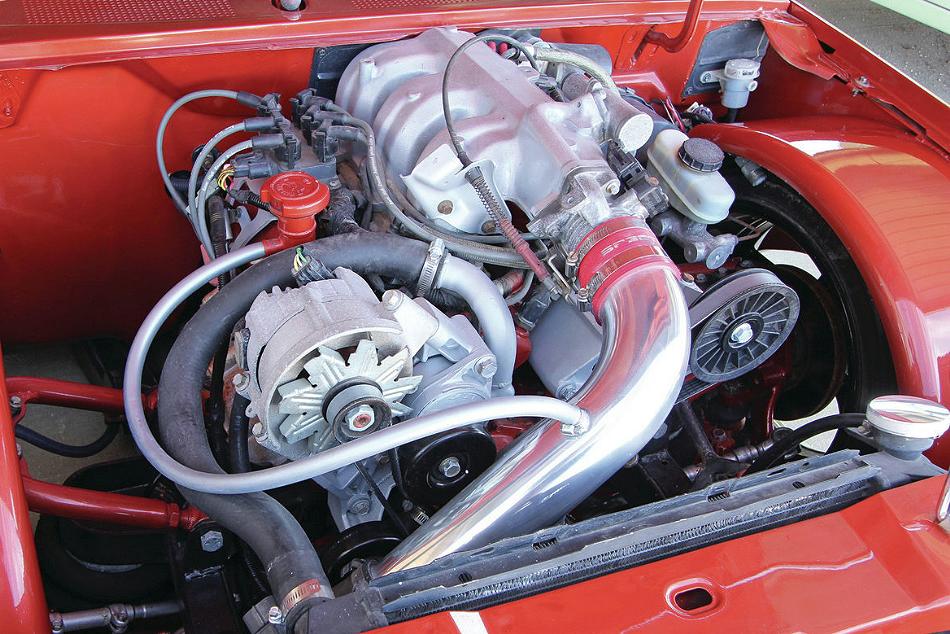 The limits of the OHV are more so caused by the poor flow limits of the stock heads and the camshafts. To give you a bit of perspective I only know of one OHV 4.0 like ours that has made over 300 rwhp (Rear Wheel Horsepower) and it has a turbo on it. Most with well built engines and ported heads make around 250-275 rwhp. My truck makes 286rwhp and 391 rwtq on a 125 shot (Nitrous). Naturally aspirated it makes 196 rwhp and 254 rwtq. The OHV engine is a Torque monster that is based off the old FE engine line, like the 390, 427 and 428. It has rail type rockers that I used to have Billet aluminum rocker arms made for it, but stopped after quality control and truly never selling more then (8) kits total.

One major deal with these engines is the Airflow and RPM’s. They are NOT made to turn 6000rpm +. Most make there max power around 4600-5000 rpm’s. My engine with all of its airflow mods makes peak power at 4600 rpm’s, and that’s with the Comp Cams 49-422-8 cam. Remember this mainly in things like custom turbo applications and turbo selection, you want to size it for full boost around 2500-3000 rpm’s to get a full power range from it, same thing with Torque converter selection.

On a stock bottom end, the pistons are going to be a limiting factor. They are cast from the factory and weak. Granted I have cast pistons in my engine but I have a lot of cylinder head work, and a Comp Cams #422 cam. Most supercharged 4.0’s running on stock engines make around 200-225 rwhp, which is good since they make around 130-145 rwhp stock or with bolt ons.

When you install a cam, the only two available for the 4.0 OHV are the 49-410-8 and 49-422-8 from Comp Cams. These really do a good thing for the overall performance from this engine. The 410 is what I would recommend for a 4×4 application, but if you are looking for the most from your engine, then the 422 is the way to go. Don’t listen to Comp cams crap about hard idle as I’ve installed the 422 in stock trucks and drove away without any tuning. Sure, tuning will help in the overall picture, but it is not required for either camshaft.

49-422-8 Cam: Good in Explorers and Rangers with aftermarket chip. Strong torque and mid-range.

The 98TM heads in stock form don’t flow as well as the 1990-1997 (95TM) due to the smaller exhaust port, but the round exhaust port allows for better port work to be done to the exhaust port, and then can be configured to outflow the earlier style heads. So in stock form, I would choose the 1995-1997 (95TH), but if you want to do some port work, then go with the later 98TM’s and ALWAYS use aftermarket castings. They are thicker and stronger then the Ford castings, are less prone to cracking, and come with new guides.

All of the cylinder heads will bolt to any OHV 4.0 engine, 1990-2000. The piston dishes are where the difference in the overall combustion chamber sizes are changed. They ALL had the same compression ratio of 9:1. The later model SOHC has a 9.7:1 Compression ratio.

I would have to say that the OHV in completely stock form should be good for up to around 225-240 rwhp before you are putting so much stress on the bottom end that it gives way. Put ported heads and a better camshaft in it, and you can step it up a bit more. Eventually if the pistons don’t give the rod bolts will.

Oil Pan – Use a 4.0 SOHC oil pan because of its built in stud girdle. You may have to use a washer under the engine mounts to clear the frame, but its a good idea.

Pushrods & Rockers – Always get new pushrods and rockers for rebuilds. Pushrods for custom lengths can be made by Smith Bros Pushrods.

When going to an aftermarket cam, the base circle is .050″ smaller than stock so they can get the extra lift and still fit through the cam bearings. By math you need .050″ longer rods which would be 5.525″, but it doesn’t always work like that. To many thing effect it which is why you should measure, If you cant or don’t know how, most people normally go with 5.550″ unless the heads are milled. If you’ve had your heads milled, you’ll have to compensate for the thickness in material that was removed from the bottom of your head. Smith Bros Pushrods will have the right 5.550 inch length. 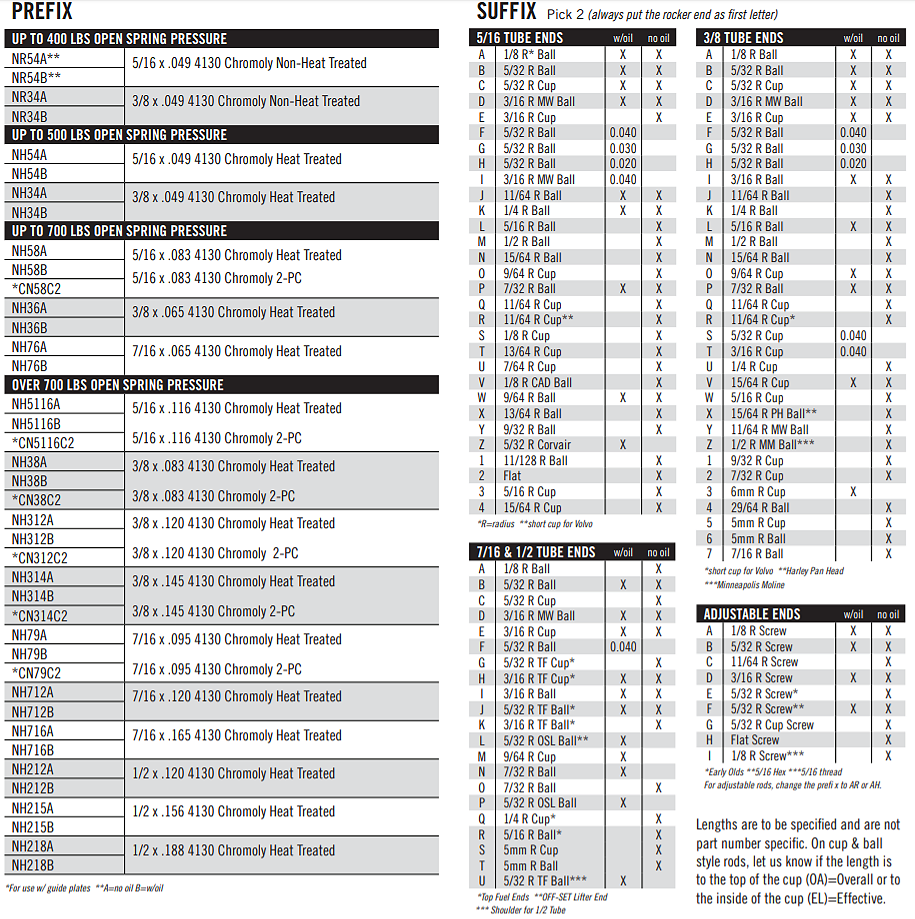 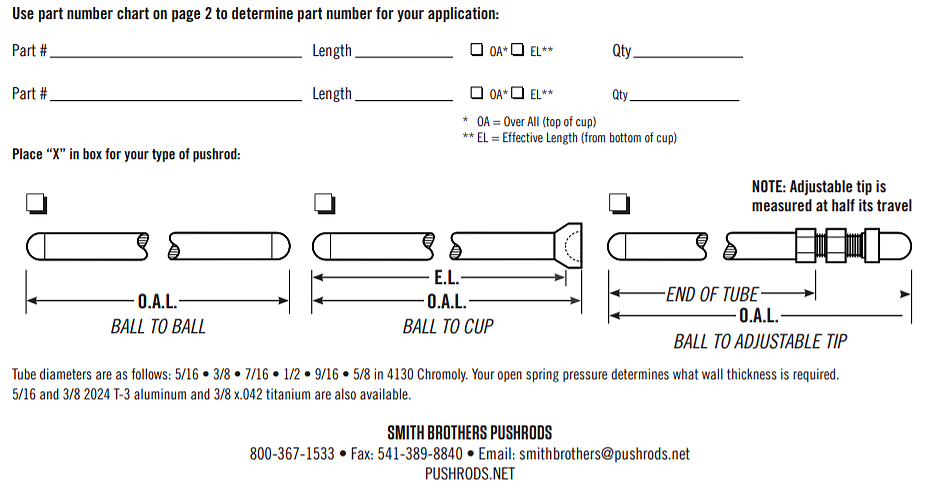 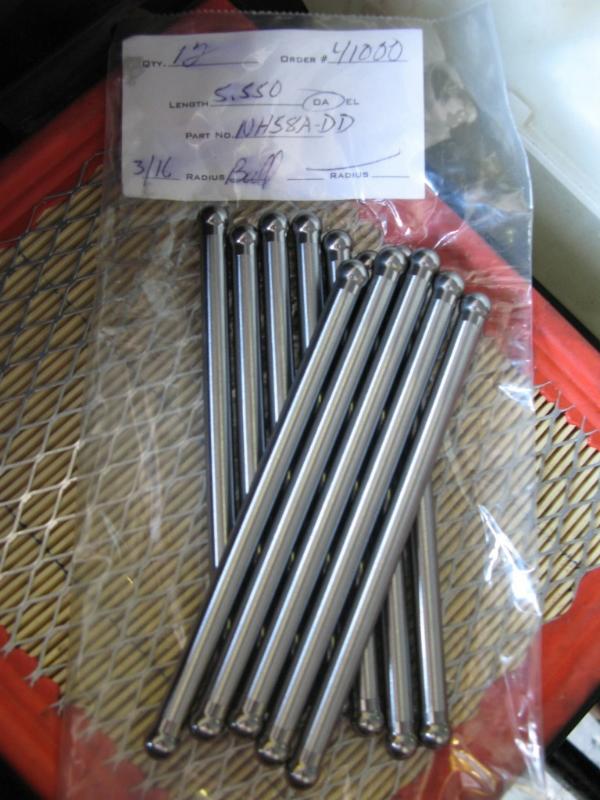 Injectors – I hardly recommend ANYTHING more then a 24lbs injector, even in supercharged applications. 24’s will hold 250rwhp with NO problem, and won’t give you any idle issues like larger injectors. 30’s are good to but make sure you need them. Anything more, like 42’s are just stupid big for these engines and shouldn’t be used. You’ll never make more power from a OHV 4.0 then a 30lbs injector will support. I’ve made 370rwhp from 30’s on 4.6 V8’s all day. I use 24’s on my truck, but I also have a wet shot that adds the extra fuel under load so the 24’s make my idle nice, well as nice as you can get anyway.

Throttle Body – The largest throttle body made is 66mm from BBK. Edelbrock used to offer a throttle body, but it was built by BBK, just with Edelbrocks name on it.

MAF – For the 1990-1994 or EEC4 (EEC-IV) trucks with the 4.0 I recommend the C&L 73mm MAF with the appropriate sampling tube calibration for the injectors you are running. One great thing about the C&L is you can use it for stock 19’s, and then when you do need larger injectors, you can just buy a $40 sampling tube update for the new injectors instead of having it retuned or recalibrated. Dont’t ever use a Pro-M or any other calibrated electronic MAF! They suck and throw the engines electronics for a loop.

For the later model 1995-up 4.0 OHV, the larger 65mm MAF from the 4.0 SOHC works great. If you just have to have something larger, then get a 80mm MAF for a 1999-2004 Mustang GT. That’s all you’ll ever need. The 90mm MAF that everyone loves to beat their chest about is too large for a 4.0 OHV, and is like using 42’s. There again, don’t get calibrated MAF’s for these year models, but rather since these are EEC5 (EEC-V) you can have the PCM recalibrated for the larger injectors. But remember, if you swap injectors then you need a dynotune or at least a tune using a wideband to get it right, there’s no way around this.

The 1995-2000 is a great PCM system with datalogging and reprogramming abilities, and can be mail order tuned naturally aspirated with stock injectors and MAF. But if you change either, you will need dynotuning. Same goes for supercharger tuning.

Swapping Cams – You can swap cams with the heads on, but you cannot remove the lifters, just wire them up. Don’t spend a lot of time porting the lower intake. It’s not a huge restriction.

Underdrive Pulley – The 4.0 SOHC under drive pulley works on the 4.0 OHV, but even on the 4.0 SOHC’s I’ve tried it on, it doesn’t make much if any horsepower.

Automatic Transmissions – The Ford C4 automatic transmission is best transmission behind a built 4.0 because it will hold more horsepower. The 700 R4 is an option as well from Advanced Adapters, and will do the same but with overdrive.

The main thing to remember with the OHV, it’s not made to turn 6000rpm’s so with each mod you plan review the operating RPM and the gains in which the mods makes it set to make it in.

Just some points I thought I’d jot down for you guys with the older 4.0 OHV. Some of the things I’ve said here do apply to the SOHC, but the SOHC will make a lot more power because of the improved flowing heads, and it will turn more then 6000 rpm’s. It will also bolt in where a OHV was…

Original Forum Submission ‘How To Build A 4.0 OHV For Power’