I just bought my 94 B4000 with 181k mileso n it, and it still runs and drives great. One thing I would definitely look at are the rear shackles and mounts. They seem to rust out on these trucks fairly often. I had a shop replace mine after I bought the parts, and it was probably about $500 total ($175 just in parts), lot less if ya do it yourself though. But if they are rusted out, use that as a bargaining chip to get the price dropped even lower.

I haven't had this truck long enough to really recommend any spots to really check out, but in general check the undercarriage for abnormal amounts of rust just like any car. Make sure the engine has no deep knocks which indicate bad pistons/cylinders. The 4x4 auto hubs are probably non-functional if they haven't already been replaced by manuals. Motor on the transfer case seems to go out too, especially if it doesn't get much use.

As for reliability, it is a Ranger. Everything on it that matters is the same as a Ranger, only difference is some sheet metal. The 4000 only comes with the 4.0L which is the same engine used in all Ford trucks/suvs. As for why the price is so much lower, people probably think they're not the same as a Ranger, thus not worth the same. I know there's virtually no aftermarket for the Mazda, though a lot of Ranger items will fit, aside from head/taillights.

I paid $500 for my 94 B4000, and it was well worth it. After fixing the shackles I was right around $1k invested. Still drop money into it, but nothing major needed fixed on it aside from that.

The frame in the back is where you typically see problems. The shackles will almost certainly be sketchy, but you can replace those. Just make sure they frame they bolt too is ok.
The B4000 is a 4L. I bought a 93 with 118k and ive found it to be very reliable once i ironed out the bugs. I got it for 600, but had to put about 1400 into it to get it perfect. My guess is yours needs some work.

I have a feeling there is something majorly wrong with it, that he doesn't wanna tell me about lol. I asked him

Hey, Im interested in your Mazda 4x4 for sale, do you have a phone number I can reach you at? Where are you located? Are those original km's? Is there much rust? Thanks
Click to expand...

Didn't answer either of my questions Even still, ill check it out.

I dont know where you are located, Canada?, europe? around where i am from that truck is worth about the asking price. I am sure it needs some work. The 4.0 is better than the 3.0. You can buy the hangers and shackles for the truck for under $100 and it will take about 4 hours to put them on. the slave cylinders are a weak spot and the tranny needs to be removed. the heater core is easy to change on the 94. ....

His response alone to your simple question about the rust answers a lot of others. Basically he is saying that he's selling it for the cost of the tires, which generally means there's something wrong with the truck. It could be something minor, but he thinks it's worse than it is, or it could be something bad and he doesn't want to say.

For $1k it'd still be worth it to go check out, just make sure to really listen to it run, drive it a bit aggressively (if he lets you test drive it), and crawl under it to look at the frame and underbody. If ya can't drive it, kick/shake the tires to see if there's any noise in the hubs/bearings/cv joints. Look for oil built up on the bottom half of the engine to see if any of the major seals are leaking. Check the dipstick to make sure the oil is still black and has no water built up in it.

It could be that just the shackles are bad and he doesn't want to mess with them, you could still get a nice truck out of it. Or the 4WD is out, which is fairly common between the hubs and transfer case motor. Rust on body panels isn't a real big deal as long as it's not the cab itself, everything is pretty easily replaced.

If taken care of well throughout the years, it will last you another hundred thousand miles. If not, well expect to be throwing lots and lots of money into it for the next 20-40k and then giving up.

I concur with what was said about the rust in the rear. One of my rear leaf spring hangers recently rusted and broke; while I wish I had enough dough to do all the hangers and shackles; I'll just be replacing the broken one but wire-wheeling and painting everything I see so that hopefully by the time I have enough dinero to do a whole rear suspension job nothing else will have broken. It's all pretty sketchy back there but fortunately the frame is still in great shape.
Last edited: Jul 28, 2010

I bought a 94 B4000 about four months ago for $1,800. I replaced the 4WD hubs with new manual locking hubs and the passenger side leaf spring hanger. It's got a fair amount of rust on the bed, but otherwise is in decent shape. Still runs strong. I still need to replace the gas tank, and power steering pump - which is whining. It may need a A/C recharge as well. All minor junk. AND if anyone knows where to by a bed for it, let me know. davidbkennard@yahoo.com

this thread is 2 years old dude

Would I be in error to ask a question on such an old thread? If not, by shackles, I'm assuming you guys are talking about the parts that attach the leaves to the frame?

Grew up on a Ranger

The Mazda B series trucks are pretty much Ford Rangers in almost every way. If you look at it and think it's a good buy, then go for it. Just don't be surprised if there is a lot of work that needs done to it. It is 24 years old and may have been used and abused it's whole life.

I bought a 1998 Ranger off a coworker knowing the engine was shot. Got it running and did some work on it. I found the RWD only and 2.5 Lima engine to not be matching up for what I needed but that is no fault of the truck. I sold it to a buddy for him to use for his handyman business about 7 years ago and he loves it and it is still running strong. Just make sure the truck will match your expectations and it will be golden.

sgtsandman said:
The Mazda B series trucks are pretty much Ford Rangers in almost every way. If you look at it and think it's a good buy, then go for it. Just don't be surprised if there is a lot of work that needs done to it. It is 24 years old and may have been used and abused it's whole life.
Click to expand...

rusty ol ranger said:
The B series after 94. The early ones were nothing like a ranger in terms of anything

I was not aware of that. I always thought they were siblings. Thank you. 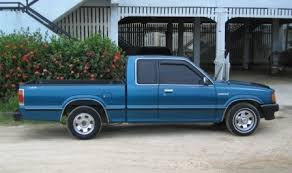