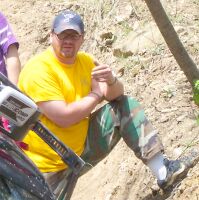 For how “rough and tumble” off-roading is, safety comes up a surprising amount. People will harp about what to bring with you to keep you safe, that scary steering setup that will make a truck a deathtrap, how to drive your truck safely, and even how to get it out safely when you get stuck. But like most messages dealing with safety and courtesy, it still gets lost somehow. People get excited before the trail ride and forget to pack a bit of extra food, or you’re too busy getting the truck set up just the right way and forget to put a fire extinguisher inside. Sure, these are pretty small mistakes compared to others you can make before you set out on a wheelin’ trip, but they could cost you or someone else with you much more in the long run. Safety checks should be a part of your preparation before you head out though.

In the least you should have:

Off and on for the past three years I have worked in industrial safety, and have heard about every possible excuse for not doing a job safely, and have even been screamed at for calling people on their mistakes, but one thing wont change – if you’re doing something the unsafe way, you’re doing it the wrong way. You put other people at risk when your tow points aren’t secure. That SAS might be sweet, but if that track bar mount is a ghetto rig, and you’re steering breaks up at the wrong time, getting home late will be the least of your worries.

Money seems to be the biggest excuse for violating equipment rules, which of course happens a few hours into a run either knee deep in mud or in a giant pond, but for basic equipment that excuse has never worked very well for me. Basically anything on that list could be had for $25 or less if you keep an eye open for deals. Sometimes you may have to spend a bit more on a spare tire or a good tow strap, but again, this isn’t exactly like buying your lift all over again. For less than $100 you could easily have all of the required equipment for a trail ride. With some planning and the decision to drink Pabst instead of Bud, you could have all of this stuff quickly without breaking the bank. If you’re prepared to ride the trail, that will make the whole run go that much more smoothly because the group won’t have to stop and try to think of a “creative” solution to your problem.

Once you’re on the trail (with the right equipment and a trail-worthy truck) keep in mind a few other things to keep the experience enjoyable for everyone. My biggest worry when I’m riding a trail is when I think someone is following me too closely, especially on a hill climb or other type of uphill obstacle. I’ve slid down the entire length of a hill climb before after losing traction, especially when there’s a layer of loose rocks and dirt on the surface. If you happen to be ascending the same obstacle at the same time, a collision is inevitable. Giving people space to maneuver is just as important on the trail as it is on the street, if not more so. Generally, I try to follow a “one truck on a serious obstacle at a time” rule, assuming the obstacle is something like a short hill climb or a set of rocks to go over. Overall, give the person in front of you some space so that if something happens, you won’t be right in the way.

On the flip side of that, don’t get so far ahead or behind the truck in front of you that you completely lose contact. Momentarily losing sight of another vehicle isn’t necessarily a problem, but if you’ve completely lost touch with the vehicles around you a small problem can become a big problem very quickly. In general, if I lose sight of the vehicle behind me, I will slow down a bit to make sure that person isn’t suck or broken or flipped over upside down in a ditch.

Inevitably someone will get stuck, regardless of how well built the truck is or how experienced the driver is. There is no shame in this (unless you’re still in the parking lot), but when I get stuck I usually try and do a few things to help it go a bit smoother. First, let people know you’re not going anywhere. Don’t let them get too far down the trail where they can’t get back in touch with you. Second, if you’re stuck in the mud or water where nobody else wants to go, don’t make them. Suck it up and get yourself muddy to get that tow strap on your truck somewhere. There’s no need to be too dainty about it either. Everyone wants to get moving ASAP and there’s nothing more frustrating than watching someone tiptoe around the mud for 45 minutes so he doesn’t get his loafers dirty. This is why bringing a spare pair of socks and shoes are worth their weight in gold on the trail. Finally, don’t do anything dumb when you’re pulling on another truck. There is a tremendous amount of power in a tow strap. Put a blanket or towel on the strap (though I sometimes wonder if it would make a difference if it actually did break). Never step over a tensioned strap. Give the forces involved in pulling a 4,000 lb truck out of the mud the respect it deserves and you will be ten times safer on a trail. When you use a winch, the process is even more dangerous.

Basically, don’t be afraid to try new things on a trail. If you come prepared and get stuck, nobody will hold it against you. You will learn a lot about what you’re capable of, what your truck is capable of, and how amazing and helpful people that you just met can be. If you show up with a barely functional truck woefully unprepared for a trail ride, don’t be surprised if someone hits you with a radius arm. ~TRS