How To Decode Ford Part Numbers

You can use these numbers at swap meets or salvage yards to match to existing numbers you might have. You know if the basic number is the same it should be compatible if the suffix number on the part you are comparing is a later alpha character than the existing one. Early suffix designations generally begin with “A” and increment through the alphabet as design changes are made that affect interchangeability. If the suffix on the part you were looking to replace (your existing part) was an “A” you could use parts with have a “B” suffix. If the part you were looking to replace (your existing part) had a “B” suffix, a part with the “A” suffix would probably have a compatibility issue. Parts that have later suffix codes are the ones to get. 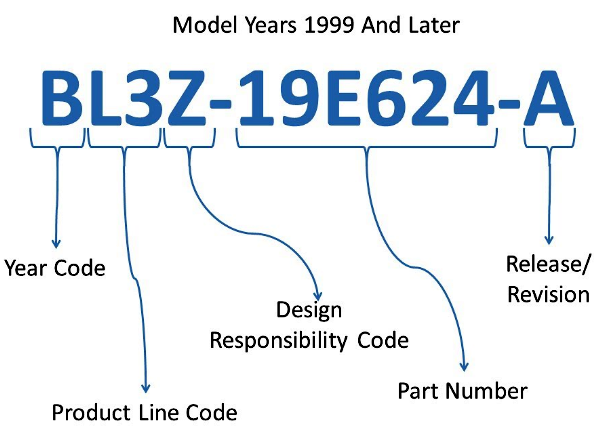 Ford part numbers (other than hardware parts) are coded in two basic ways:

Regular parts have a four character prefix (LFLL), a four or five digit part number, and a one-letter suffix.

Many body-style specific sheet metal, body, interior and trim parts use seven digits in the part number, the first two of which identify the basic body type application, with the last five (“Body Group”) identifying the specific part within a general body area. A three-letter suffix may be used, usually to indicate color.
Example: C6ZZ-6504290-BAB (Instrument Panel, 1966 Mustang, Black)

The four-digit alphanumeric prefix tells the year the part was released for production, the vehicle line the part was originally released for and by what Ford engineering division (chassis, engine, body, etc.) or in the case of a service parts, the Ford car division the part is for – Ford or Lincoln-Mercury.

The 3rd character of the prefix indicates the product part the part was originally designed for, with few exceptions. Note that “outside sales (code F), “Motorcraft Brand” (code P), or imported parts from Ford of Europe (code R) are identified with their product line code in the third position.

The 4th character indicates the part source, whether it is product engineering office or service part.

A part-number suffix generally tells you the change level of a part, regardless of whether it is applied to the casting, the finished part or the service part. A suffix of A applies to a part produced as it was originally designed, B indicates it was changed once, C indicates it was changed twice and right through the alphabet in sequence, excluding the letter I. When the alphabet as been gone through once, the suffix grows to two letters and starts over as AA, AB, AC and so on.

How does a change affect the other two numbers? A service part and its number can change independently of the casting part and its number simply because it comes after these two in the scheme of things. Using the same reasoning, a finished, or engineering part can change independently of the casting, but not of the service part. A casting affects both the finished and the service parts. This is why the suffixes of all three numbers rarely match.

The suffix can also refer to the color or finish of the part, or the left- or right-hand use of a part. In most cases if the part is for left-hand use, the basic number ends in a odd number and the basic number for the right-hand part ends in a even number. For example, the 1969 Mustang front fender wheelhouse molding C9ZZ-16038-A is the right-hand molding and C9ZZ-16039-A is the left-hand molding. Notice there is no body code in front of the basic number 16038. The reason for this is that a change in body style did not effect the application of this part…that is, all ’69 Mustang body styles used the same wheelhouse molding.