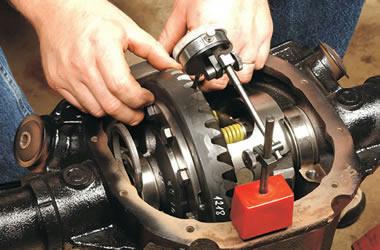 When installing a ring and pinion, you have to have a perfect installation or else you are going to destroy the gears and bearings.

One of the critical measurements that must be made is setting your backlash. What is backlash? When you turn the pinion on your differential it will turn a specific amount of space before it actually contacts the the ring gear to turn your axles. If you have too little backlash the pinion is jammed into the ring gear and this will produce a lot of friction and heat and will lock up your rear axle. It will not turn freely. If you have too much backlash the pinion and ring gear will be too far apart and this will allow the gears not to mess properly and with the force of your motor will chip and destroy the teeth of the gears. This will cause excessive whining and will eventually destroy your axle again.

As you can tell this is a pretty important measurement.

When replacing the pinion gear shim you may start with a shim measuring .019. If you start with that, you may end up with a backlash reading of .021. This is much too large. It should be somewhere between .007 and .015. If you pull that out and replaced it with a .029 shim, it might yield a .015 backlash. This is within spec for most rear ends but it is a little on the loose end of the scale. If you take that pinion shim out and use something even thicker, like a .038 shim you might be in business. Reassembling the rear might still give you a backlash of .015 still. What happened? Think you need to go to an even larger pinion shim? 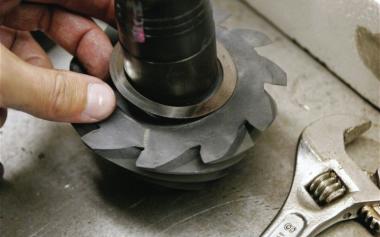 You’re close. The only thing adjusting the pinion depth is this shim and it for is getting a good wear pattern on the ring gear. The pinion depth should be measured from the centerline of the axles to the flat face of the pinion gear. That requires a special jig to hold the dial indicator in place. However, rumor has it that .028 or .029 shim should be close enough for an 8.8 rear axle. You should measure this on your axle housing however. Usually a good start is to reuse your old pinion shim.

To adjust backlash, you change the shims on the carrier. To increase backlash, decrease the shim on the left and increase by the same amount on the right. That basically slides the carrier to the left, thereby increasing backlash. To decrease, do it the opposite way. Acceptable backlash is about .008 to .015. Also, be sure to check runout (wobble) on the flat face of the ring gear. Should be .003 or less. 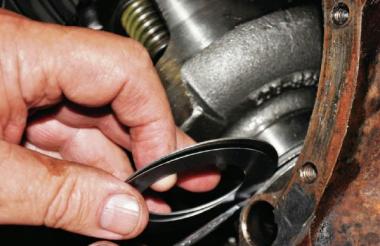 Pinion shims are used to establish the pattern of the mesh of the pinion with the ring gear, not the backlash. Once the proper pinion depth is set, so that the mesh pattern is centered on the faces of the ring gear teeth, the backlash is set by varying the shims that position the differential carrier, and thus the ring gear, from left to right or vice versa, in the axle housing.

In most 8.8 rear axles, you will probably end up with pinion shims of .028 to .030 on them. Ford Racing Parts techs have said that most installers found that 3.73 and up ratios usually required slightly thicker shims than that.

This example is using an 8.8 rear axle, but the ideas work with all rear axles for all Rangers. Make sure you measure everything twice and three times, and then do it again! Getting it close isn’t enough. Make sure you get it right.