Whether you have a trail rig with powerful add-on lighting and a winch, or a street truck with a huge audio system, you need some way to calculate what size wiring you need to make your equipment perform, and avoid a fire. There are several rating standards that can be used for selecting proper wire gauge. The two I am familiar with were produced by the American Bureau of Shipping (ABS) and the Federal Aviation Administration (FAA). For the purpose of this article, I chose the FAA as a source because their material is public information and can be posted here without copyright infringement. The book I used is the FAA’s Acceptable Methods and Practices.

The FAA stipulates two types of loads: Intermittent (no more than two minutes) and Continuous. An example of an Intermittent load is a winch or a starter motor. The charts are fairly easy to use. We’ll use a hypothetical 8,000# winch drawing 400amps at it’s maximum pull rating and run an example.

The chart to the left of the graph is labeled “Intermittent Circuit Voltage.” The voltages listed are 200/115/28/14. We will use 14volts and follow the “Wire Length in Feet” down to our estimated wire run. For the sake of simplicity, use the next longest run if the chart doesn’t list yours exactly. For the sake of example, we want to run a 13 foot wire from the front battery to the rear receiver hitch. Our chart lists 12 feet and 14 feet, we will use 14 feet.

Next, we trace our “14 feet” line to the right across the graph until we hit our Amperes rating. The Amperes are represented by the diagonal lines running from top right to bottom left. As we trace though, we run into the heavy curve labeled “Curve 3”. ONCE YOU HIT THAT CURVE, FOLLOW THE CURVE! You can not select a wire gauge that falls below that curve. In our case, the curve intersects 400 amps just before 3/0. If you study the chart, you will find that no winch should have less than 3/0 even for a 4′ run from battery to front mount. Makes you wonder about that 2-gauge cable the winch manufacturer gave you. Now, let’s look at the Continuous Rating chart. Continuous Ratings are given ‘in free air’ and ‘in a bundle’. there are simply two ‘do not fall below’ charts instead of one. For our example, let’s assume we are installing four 55 watt H3 halogen lights on a ten foot run that are drawing approximately 16amps (55w*4/14V=15.7Amps). We will use the ‘bundle’ rating on our example, just in case the wiring for our off-road lights share a space with some other wiring somewhere in the truck.

We follow the 14 volt chart down until we get to 10 feet. Then we run the ten feet over to the 20 amp diagonal line (remember, always use the next longest run, the next heights amperage and the next largest wire size), and then run vertically down to find with wire gauge. In this case, we fall between 14 and 12 gauges, so we will use 12. If we would have hit ‘Curve 1’, we would have followed it as we did in the previous example. Now, some people may look at these charts and say, “Hey, aren’t those a little conservative?” I will agree that they are, but airplanes can’t really afford fires and failures. And, well, neither can we. Especially when you may be depending on your winch to run for four hours in one or two minute intervals rescuing a dozen or so other trucks in zero-degree temps. Like that’s ever going to happen.

You may find this chart more helpful. Obviously you need to know how many amps the device is drawing.

Amp draw is a simple mathematical calculation. Divide the total number of watts by the system’s volts. 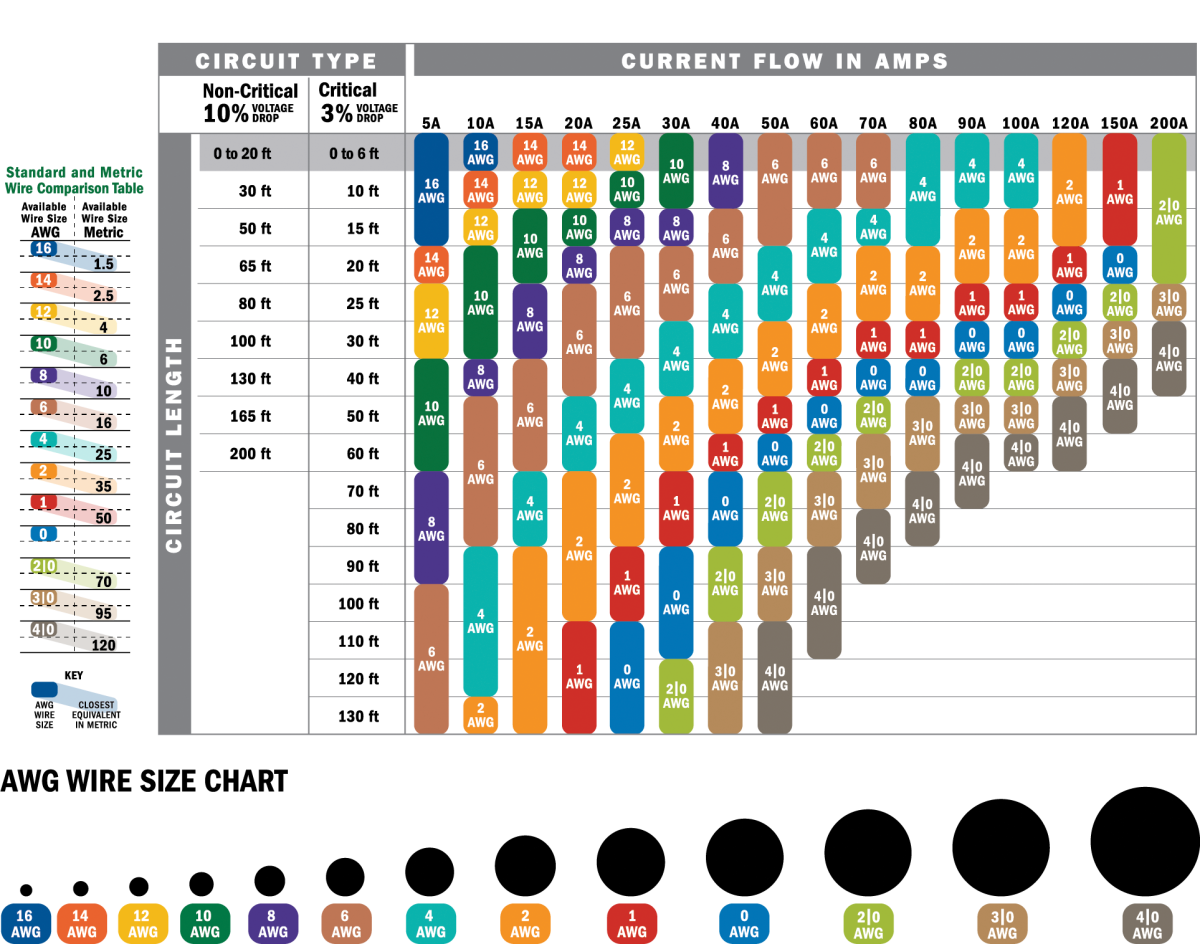