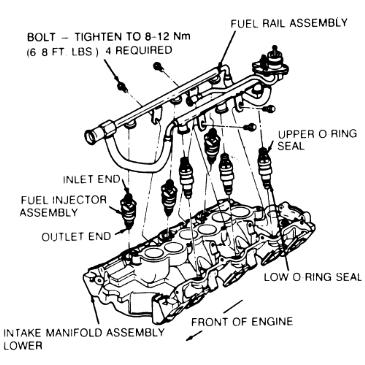 Ok, you just found something on Ebay that’s supposed to give your truck 20 more horsepower…Right – we’ll get to that later… First, how about some basic information on how fuel injection systems work.

Ok, one more thing before I get started, I’m NOT an expert on this matter, but I’m well read, and have the basic concepts down. This is not an end all, be all write-up, just some general information on how FI works, and what you can do with it.

Most of my information is just transposed from 3-4 main sources, namely:

There are one or two more books that you can get, check out the V8 Conversion forums.

Basically, what happens the car runs is simple. The computer gets a reading from an air sensor, telling it how much air is coming into the engine. The computer then goes to a lookup table, where it finds the amount of fuel needed for that amount of air. The computer will then allow that much fuel to pass into the injectors, and on into the cylinders. 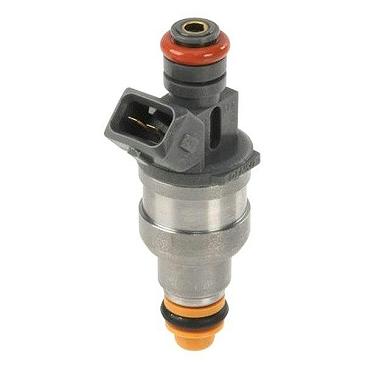 As the car warms up, and reaches normal operating temperature, it takes readings from the exhaust gas sensors, or the exhaust temperature sensors. The computer then determines if the engine is running lean or rich, and compensates for it, accordingly.

When you accelerate, you draw more air into the system, (and use more gas), and the whole process is repeated. Keep in mind that this is happening thousands of times per second, and the whole thing doesn’t take very long to do.

That, in a nutshell is how a basic FI system works.

Now, to get into a little more detail.

The air that is coming in, is measured either by a MAFS (mass air flow sensor) or a MAP (manifold absolute pressure) for volume. Also, you have a barometric pressure sensor, engine coolant temperature sensor, and an air charge sensor. Also, for timing purposes, you may/may not have a PIP sensor, and a knock sensor. Don’t forget about the throttle position sensor, either – it’s very important.

Brief overview of the different sensors:

MAF: heated wired is cooled by air flowing over it, computer measures how much current is needed to keep wire at specified temp (i.e. 100* F)

MAP: outputs a square wave signal to the computer, ranging form 90-170Hz (160Hz is atmospheric pressure – no air is needed by engine) idle is approximately 120hz, and deceleration is 90Hz. Therefore, as the engine accelerates, the frequency increases, the computer ‘sees’ that it needs more fuel.

BPS: Barometric sensor measures the pressure of outside air – more altitude = less oxygen in the air. The computer ‘modifies’ itself to compensate for this.

Engine coolant sensor: Senses the temperature of the engine – as the engine warms up, it can use a leaner mixture, and therefore less gas.

Air charge Sensor: Similar to ECT, measures how dense the incoming air is, knowing that more fuel is needed for colder air

PIP sensor and knock sensor aren’t extremely vital to this discussion, so I will bypass those

TPS (throttle position sensor): Used to determine the position of throttle (open, closed, partial opening) As you get closer to WOT, the computer relies less and less on the exhaust sensor readings, and more and more on the built in tables.

Ok, so now that you know what the sensors do, what good does that do you, except for a bunch of gee whiz info? Well, here’s the deal. I’m assuming that you know colder air requires more fuel to burn completely, and that’s why a ‘cold air intake’ will give you more horsepower…(supposedly). Basically, the whole theory is ‘more air in, more power out’ Well there are two sides to that story. You need to be able to flow more air in, yes, but you also need more air out. When you trick the computer into thinking that it’s getting more air coming in, (cold or hot) then you end up with really poor fuel economy. Because the computer is thinking that the engine isn’t warm yet.

The theory behind it all is that cold air is better than hot air, because it’s more compressed, and will expand more when heated. Incidentally, it’s the same principal theory behind turbochargers, and superchargers. However, and engine requires a LOT of air to be ‘charged’, but that’s another topic altogether.

When you buy a ‘kit’ from ebay, or your buddy, or wherever that claims to give your engine 20hp in 20 minutes, beware! Think about it, if it was really that simple, why didn’t they do that from the factory? Use some common sense, and maybe ask a few questions.

For example, if you see a kit that ‘plugs into your wiring and gives you 20 hp you need to be very wary – it’s probably a resistor to change the voltage the computer sees. If the computer thinks that it’s getting more air, or colder air, or more, colder air, then it’s going to let more fuel into the engine. Sure, you’re going to get more power, for a bit, but you’re also going to drain your gas tank, and foul your plugs, because you’ll be running a lot richer than you should be. This is bad in the long run.

Other things you may see are things that plug into your exhaust sensor, and they have the same effect, just a different method