Getting my 1996 Ford Ranger ready to pass a state emission inspection, I had to diagnose Ford trouble codes P0401 and P1443. 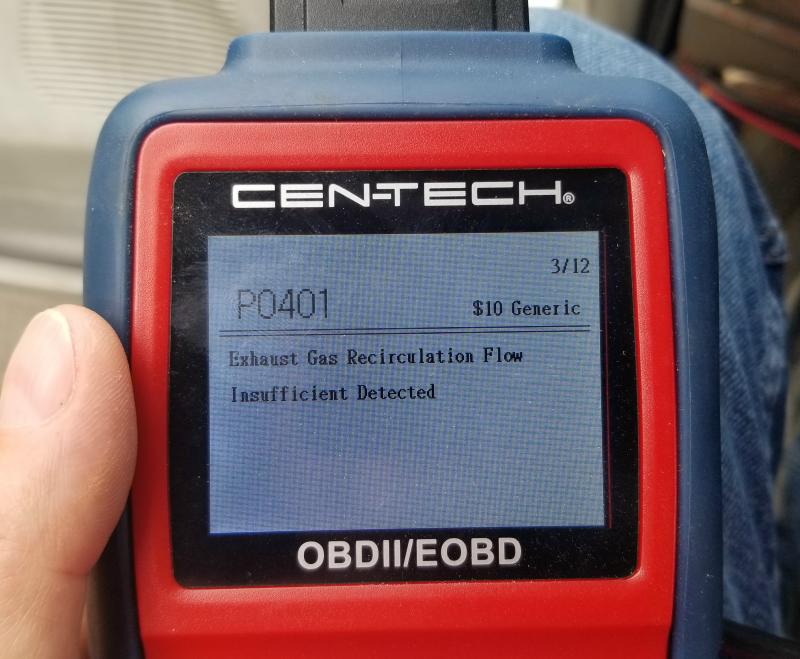 When certain driving conditions are met and the computer wants exhaust gas recirculation, it provides a pulsing voltage to the electronic vacuum regulator (EVR). The EVR is a solenoid valve. When it opens, it allows intake manifold vacuum from port 5 to flow into port 6 on the top side of the EGR valve. The vacuum pulls up on the diaphragm, lifting the pintle off the pintle seat. With the pintle off its seat, exhaust pressure forces exhaust gas up through the EGR tube, the EGR valve, and into the intake manifold at port 4. On the way up to the EGR valve, the exhaust gas passes through a restriction. The DPFE sensor hoses are connected to ports 1 and 2—before and after the restriction. By comparing and reporting the differences in pressure, the computer can determine exactly how much exhaust gas is flowing through the EGR valve. 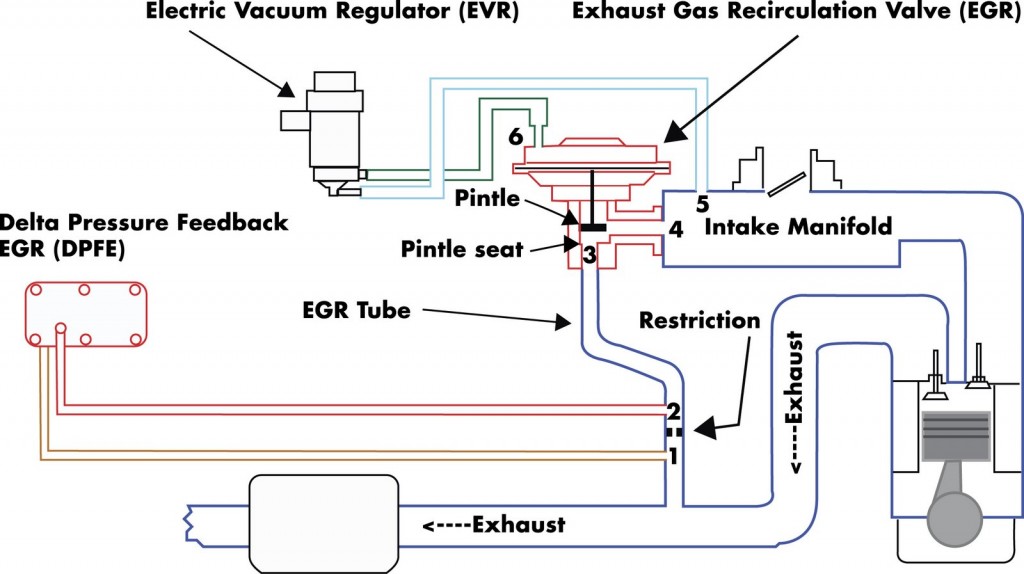 What Goes Wrong With The Ford EGR System

Exhaust gas contains water vapor. Ford did consider the ramifications of this water vapor getting into the DPFE and forming ice. So they programmed the computer to ignore an EGR malfunction if the temperature is below 32°F. Unfortunately, Ford didn’t give enough consideration to the impact of corrosion inside the DPFE, and that’s what causes most of the EGR related problems.

Do it yourselfers and professional technicans make an all-too-common mistake if they automatically replace the EGR valve when they see an EGR related code. In fact, the valve itself is usually the most reliable component in the system. 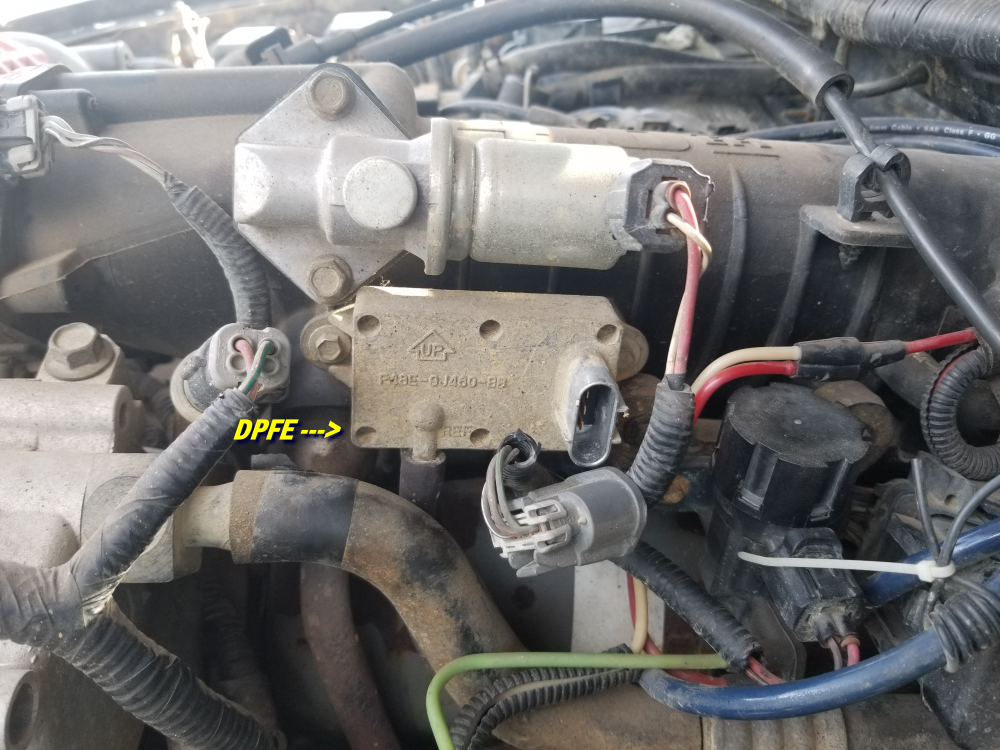 Step 1 – Check the condition of the vacuum hoses going to the DPFE sensor and the EVR. Look for cracks or tears. Replace the hose if you find any.

Step 2 – Check the operation of the DPFE with the engine off, key in the run position. Using a digital voltmeter, check for voltage on the brown/light green wire. Look for a reading between .45 and 1.1 volts. If your reading is outside that range, you have one more voltage check to perform before replacing the sensor. Check the voltage on the brown/white wire. It should read 5 volts. If it doesn’t, the sensor isn’t getting power from the computer. Then it’s a whole new ballgame. If you have 5 volts, and the reading from the brown/light green wire is outside the range, replace the DPFE. After replacement, perform the voltage check again to eliminate the possibility that the EGR valve is not seating properly.

Step 3 – Leave your meter connected and start the engine. The voltage SHOULD NOT CHANGE! That’s because there should be no EGR flow at idle. If the DPFE voltage changes, either the EGR pintle isn’t seating properly and it’s allowing exhaust flow past the seat, or the DPFE is bad.

I ordered a new DPFE and replaced it. 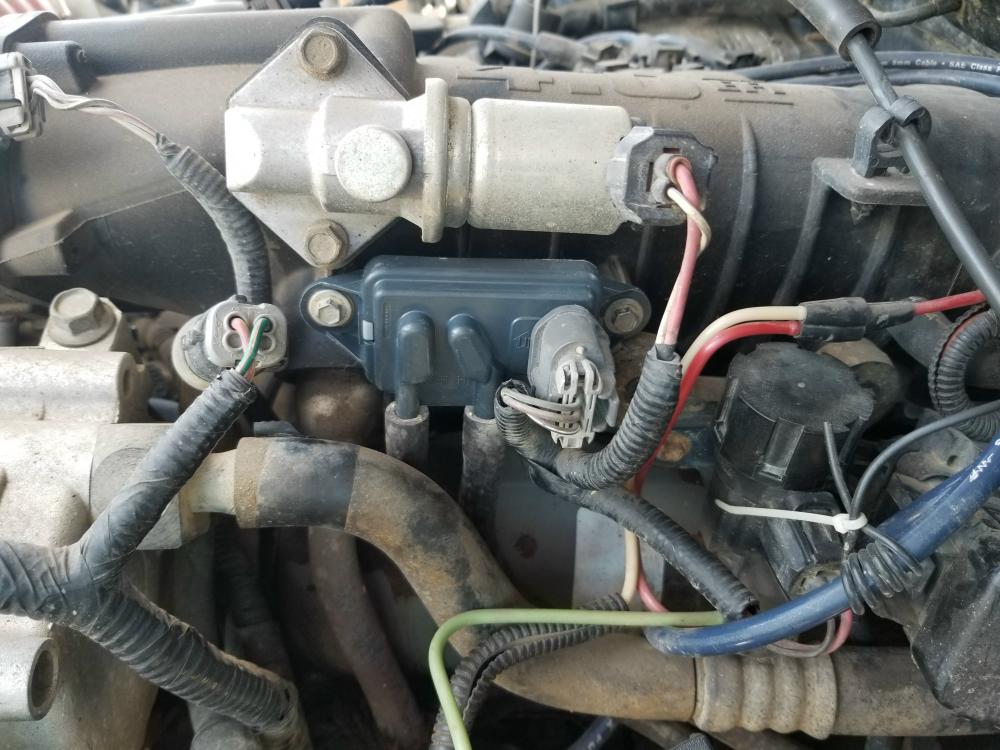 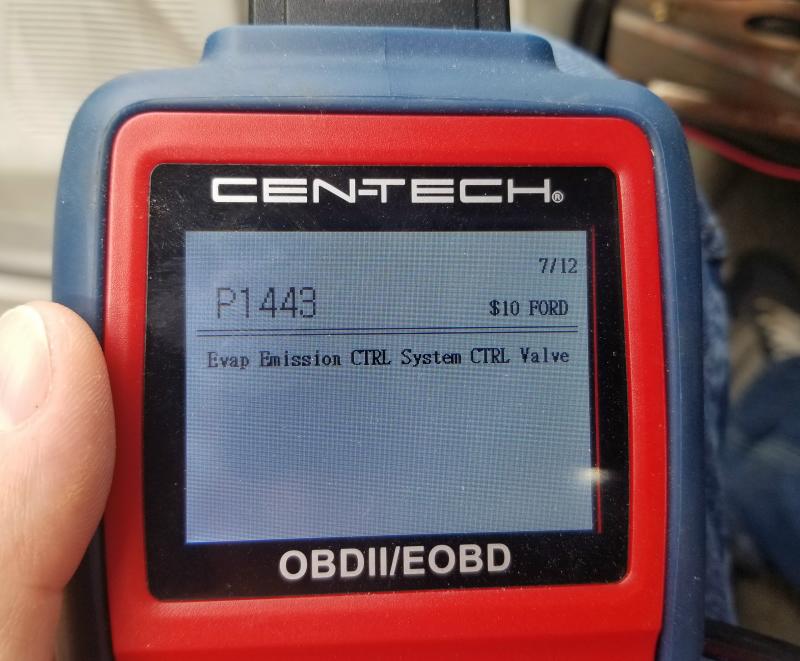 After replacing the DPFE and clearing the codes, the P1443 EVAP Emission CTRL System CTRL Valve code came back.

My next step was to replace the Canister Purge Solenoid Valve that’s located down by the charcoal canister.

What Does The Canister Purge Solenoid Valve Do:

The purge valve is the part of the vehicle Evaporative Emission Control (EVAP) system.

While changing out the Canister Purge Solenoid Valve I realized that the hose between the valve and the charcoal canister was rotted out and cracked. 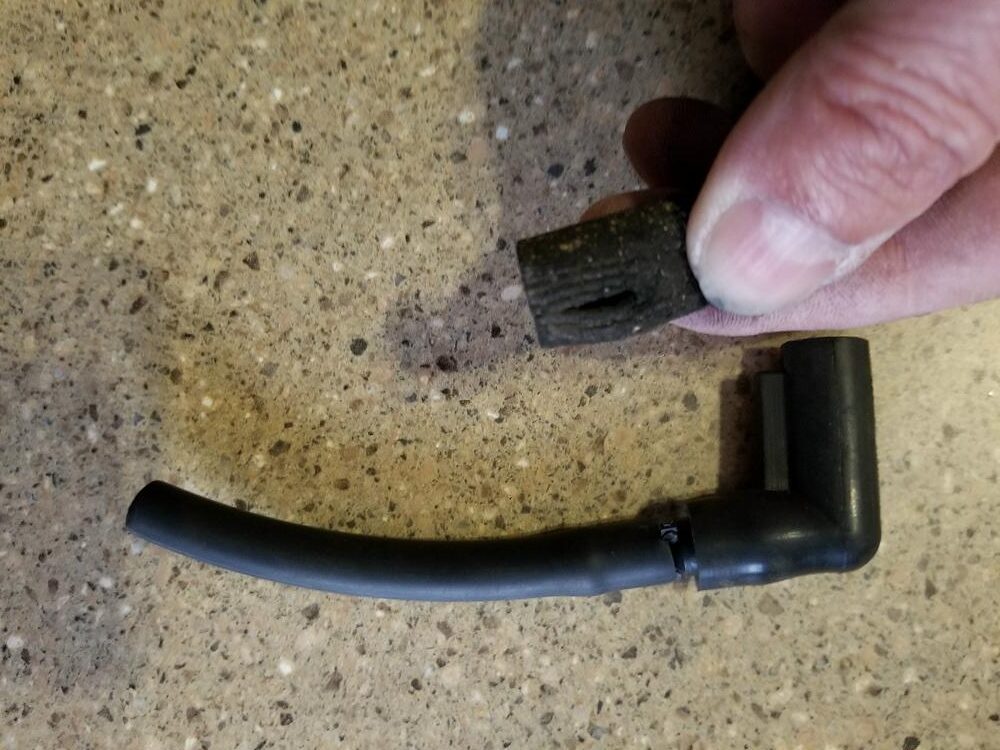 I should have inspected the rubber hoses first. The parts store didn’t have a replacement hose, so I made one with a rubber vacuum hose, plastic vacuum line connector, and a 90 degree elbow. 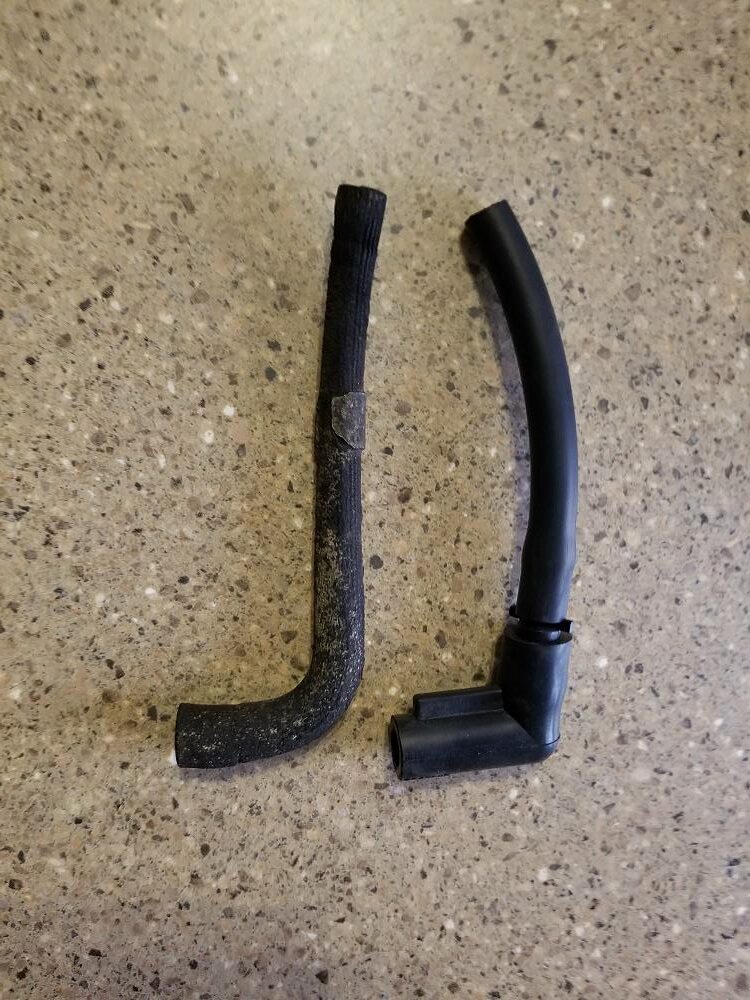 In all honesty, the P1443 code was probably caused by the leaking hose. I strongly suggest that you check the hose between the charcoal canister and the valve before replacing the valve. 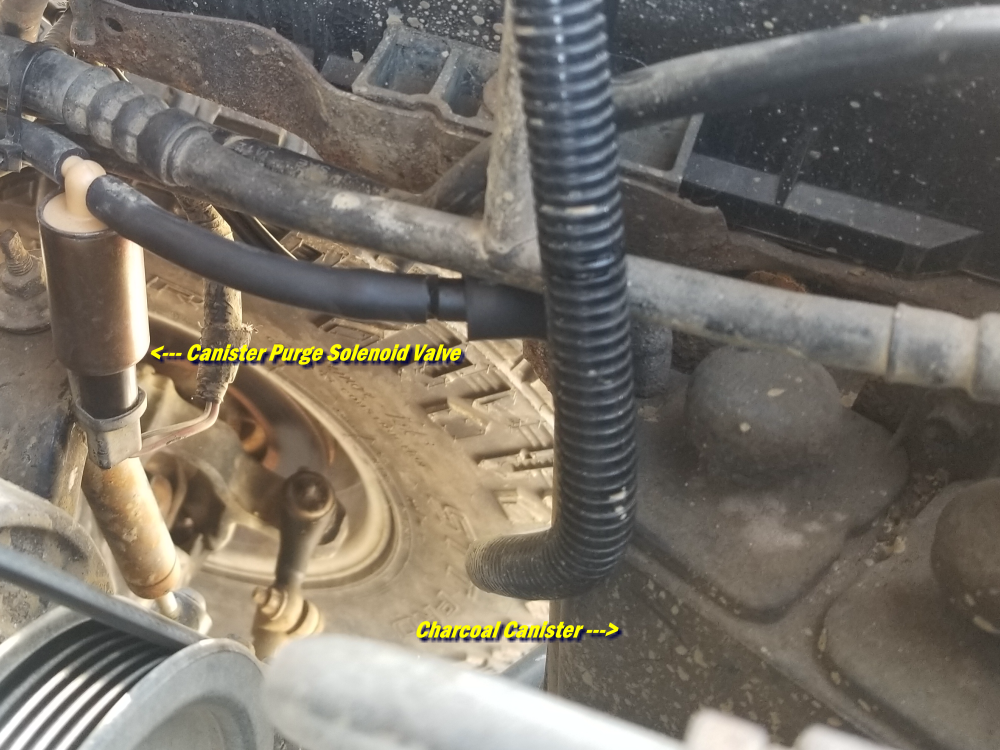 After replacing the hose, valve, and clearing the code, the system was fixed and the code never returned.