There always seems to be a few very common questions about differentials. Like what does it do, how does it work, which one should I get for my truck, and what can I expect from it.

All of these are valid questions and I’ll try to give an explanation of the four basic types and how they work in the real world. Not something that will require an engineering degree to understand. If that seems a little simplistic for the more experienced and educated among us I apologize. I’m not writing this for you, this is aimed at those among us who need or want to make a change. But don’t know enough about them to make an educated selection about what they need for their vehicle.

All differentials are a compromise mechanism designed to deliver the rotational force of the engine to two wheels that are not always going the same distance at the same time. The makers have come up with various methods to do this but in the end there are really only four “basic” types of differentials in use today: The Open, the Limited Slip, the Locker, and finally the Spool. We’ll start with the Open and go from there.

Open Differentials:
These have been in use nearly forever and are THE preferred factory installation. Both because of their operating characteristics, and they are relatively inexpensive to make. Something all manufacturers are dearly in love with. On the plus side they do have excellent on road manners and under ordinary conditions are perfect for any vehicle. It will always “deliver to the ground” the same amount of force through both wheels. It doesn’t care whether they are going the same speed, as in going straight down the road. Or one is going faster than the other, like in a turn.

This is both their strong suit and their downfall. That “deliver to the ground” part is the catch. Where there is always more traction than force, everything is fine. But lose traction, for whatever reason on one side, like in rain, snow, or ice and things get strange.

If one wheel should lose traction for whatever reason and begin to slip, this will cause a corresponding reduction in the amount of force being delivered to the opposite wheel as well. This is what leads to the dreaded one-wheel-peel, as you will still have equal force, but unequal traction at the tires. This is something I’m sure we have all experienced at one time or another. The only up side to this is that a vehicle is less likely to slip sideways if only one wheel is actually spinning. The wheel that still has traction can help hold the vehicle’s path in a straight line. 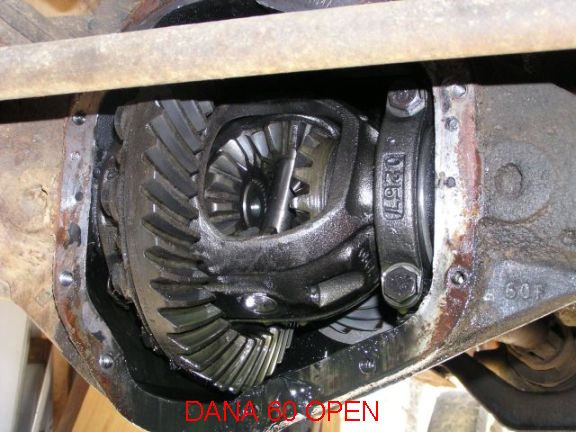 Limited Slip:
Now things get a little more complicated. Limited slips are basically exactly what they say they are, Limited Slips. They are made in three common versions, the plate clutch type, cone type, and the geared type. Each has its own way of working, but the end result is essentially the same. I won’t go into how the engineering of each kind works here, as we’re more interested in how it affects our driving. Maybe if there is enough interest I’ll write a part two on the types and how they work.

Limited Slips are actually torque sensitive devices. Big words I know but it is important to understand that they don’t care how fast things are going they operate on the “what’s getting to the ground” principal, exactly like the open. And just like the open when there is “no” traction, like a wheel is up in the air. They will ordinarily do nothing than spin the offending wheel.

You will often see references that say they “transfer power” to the wheel with the most traction. That’s not entirely correct, they haven’t the brains to know the difference. They do however mechanically “react” to the pressure, or traction, difference between the wheels by using the slower wheel as a brake for the faster one. In so doing the slower, non-spinning, wheel gets some of the power that would be otherwise wasted through wheel spin. It takes a fair amount of resistance (traction) to make them actually operate. So small differences are generally ignored. Like slow speed, low power turns in a parking lot. In a case like that they operate more like an open and will divide the power between the wheels.

When one wheel begins to slip, whatever amount of torque that is actually being transmitted “to the ground”, or wheel resistance, is multiplied by the torque biasing ratio of the diff and is applied to the slower wheel. This is what helps keep you going in the slippery stuff. But in a case of zero, or no traction like one wheel off the ground, or slick ice they act very much like an open differential and do nearly nothing for you. This can be “helped” by applying a little bit of e-brake. The braking action “fools” the differential into operating as if there is some traction. The brakes resistance triggers the system of clutches, cones, or gears, to force some power to the other side and will often get you going again.

A Limited-slip generally works well enough in most conditions you find while on pavement (eliminating the one-wheel-peel, for example), as well as in mild off-road conditions where all 4 tires remain in good contact with the ground. 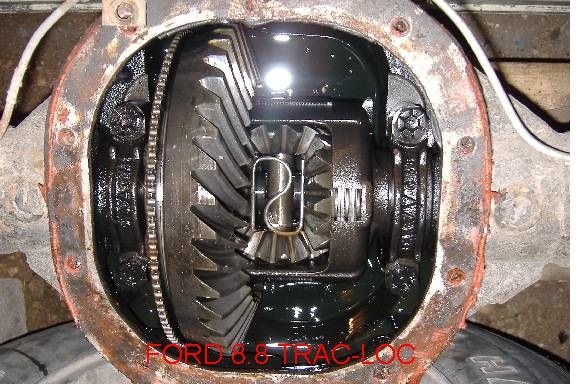 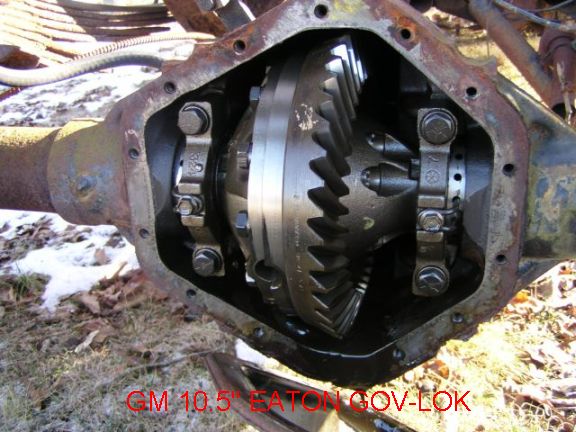 Lockers:
OK, now we come to the fun stuff. There are two types of lockers out there: Automatic and Selectable (or Manually Operated).

Where lockers are different is that speed, not traction or resistance, is the operating principal. It doesn’t care a whit about traction. Unlike a Limited Slip it will try to turn both wheels no matter what the traction conditions are. For example if one wheel is up in the air the other will still turn, period.

Just locking both sides together to guarantee delivery of the power to both wheels might be great off road. Or get you down a drag strip faster. But it could just as easily get your truck bent or in a worst case scenario, get you killed on a snow or ice covered road if you’re not careful. In a turn an automatic locker will unlock as the outside tire is being pulled ahead by the ground. This allows it to retain traction with all four wheels in the turn. This unlocking can often be heard as a clicking or ratcheting sound in a slow speed turn, like in a parking lot.

The down side is that they always drive the inside wheel or slower wheel in a turn. It can become a bit of a problem for someone not paying attention or inexperienced with it. Get a little too heavy with the gas pedal in a close parking lot, and your liable to regret it, especially if there is snow or ice on the ground. As long as the inside, driven, tire has enough traction to handle the power, all’s well and good. If it can’t then it will begin to slip, no surprise there. But the locker mechanism will only allow the tire to rotate a few degrees before it catches up with the outer tire. When that happens, there will be a sudden shock to the outer tire as the teeth in it lock up.

Now if you have gotten a little too frisky with the gas it can be rough. It can sound or feel like you might have broken something. Now things get interesting, the inner tire is now slipping so it is absorbing little or none of the engine output. It’s all suddenly dropped on to the outer tire. Kind of like sidestepping the clutch, hence its bad habit of snapping loose and sliding sideways. If that occurs and you still have your foot on the gas, like it or not, you’re going sideways. If this happens in the cramped quarters of a snow covered parking lot. It could very well mean an unplanned trip to a body shop. So on the street, and especially in close quarters a locker needs to be treated with certain degree of respect where the gas pedal is concerned.

push of a button becomes a spool (described below). Their big advantage is that they don’t have the odd handling characteristics of an automatic locker when turned “off” (open) for street use. But will provide the traction of a fully locked spool when engaged. You only need to “select” it as or when you actually want, or need it. Some newer selectable lockers are available today that combine a limited-slip function with a spool, rather than open/spool.

A Selectable locker is a different breed of cat. It’s actually two differentials in one. It ordinarily operates as an open, but with the push of a button becomes a spool (described below). Their big advantage is that they don’t have the odd handling characteristics of an automatic locker when turned “off” (open) for street use. But will provide the traction of a fully locked spool when engaged. You only need to “select” it as or when you actually want, or need it. Some newer selectable lockers are available today that combine a limited-slip function with a spool, rather than open/spool.

Selectable lockers usually cost a bit more money than automatic lockers, especially in the case of air lockers like the ARB. These require an added piece of equipment in the form of a compressor to operate them and require a driver input (the pushing of the button) to operate. 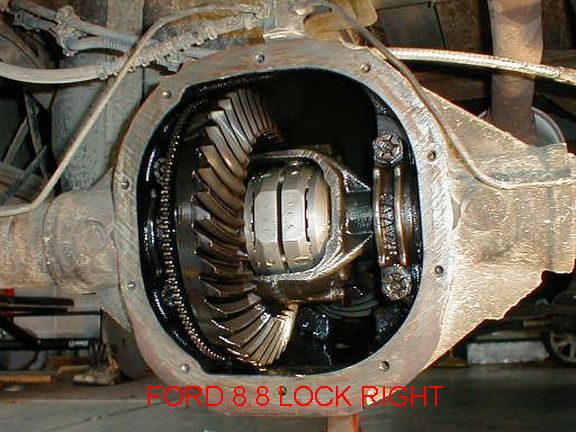 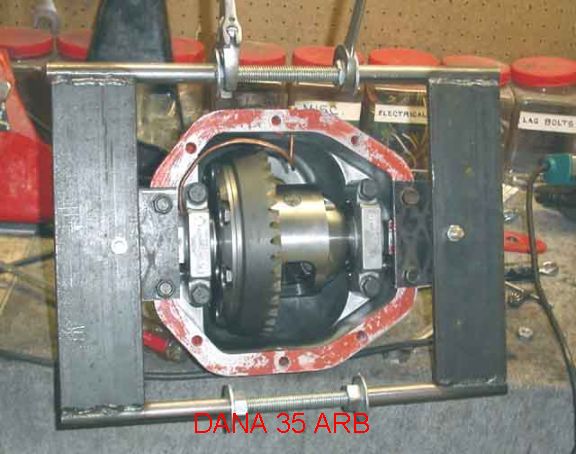 Spool:
The Spool isn’t really a true differential at all, as it is a device that holds the ring gear and physically locks both axle shafts together. There is no provision for differentiation between the sides at all. Any time you turn a corner with a spool you will be slipping or scrubbing one of the tires. In extreme cases where the a tire gets jammed or traction is high enough to prevent slipping, they can severely stress and/or break axle shafts. They really should be avoided for anything but a dedicated off road vehicle. I personally think it’s nearly useless on the street, and may even be illegal in some areas. But that’s my OPINION, others may and often do disagree.

There is also a home grown version of it known as a Lincoln Locker. This is basically an open differential that someone has used a welder on to prevent the differential spider gears from doing their job, and in so doing, turns it into a spool. The term Lincoln Locker is kind of a play on words. Someone, somewhere, at some time once used a Lincoln arc welder to do the job. So they thought it was funny to call it a Lincoln Locker.~ TRS 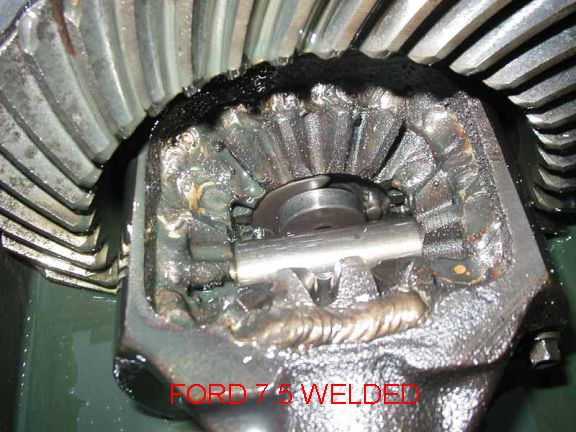