After removing the four bolts that hold the seat and the torx bolt on the seat belt track remove the seat from the vehicle. The next step is to remove the flip down console. To do this remove the plug in the left rear corner of the console and remove the torx bolt. Your seat should look like image #1. After removing the metal plate there is a little knob that needs to be cut or broken off, I broke mine by trying to unscrew it.

Next remove the seat belt (the torx bolt is the same size as the others). With the seat belt out of the way pull back the seat cover (image #3).

There is a depression in the cushion; this is where you want to cut. I used a utility knife but a hacksaw will make a much nicer cut. Under the cushion is a metal support (image #4), to remove this lift up the main seat cushion (image #5) and cut the support out. I used a Dremmel tool with a heavy cut off wheel, but if you are more patient than I am a hacksaw will work just fine.

CAUTION: If you use a cutoff tool, be cautious of sparks setting the foam on fire. You may want to cover the foam to keep sparks from hitting it. 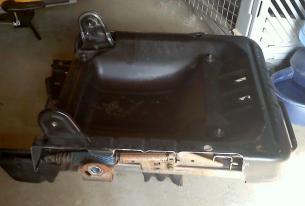 After you remove the support grind (or file) any sharp edges you have just created so they cannot do any damage.

Reattach the seat belt and put the seat back in your truck. I recommend running out to your local auto parts store and getting some seat covers to cover the hole where the console was, but this is not necessary. Caution, take your time, if you screw up there is not much you can do.