If your like me and do much of your own maintenance or would like to start. Changing the oil on your 4 banger can be a pain in the butt because the filter is horizontally mounted to the block. Oil drools all over the side of the engine as soon as you start to unscrew it. Not only is it a pain because of the drooling, the filter is also fairly small and I believe that a larger filter will do a better job keeping the oil clean thereby extending the life of the engine.

Then one day in the local parts store I noticed that the gasket and mounting screw on my filter appeared to be similar to that of the old Ford FL-1A filter. The FL-1A is both larger in diameter and longer than the standard filter that is on my 2.5L engine, almost 50% by volume. The only problem with substituting the larger filter was that it was long enough to possibly hit the frame and other things if the engine vibrated badly enough. So I did a little research and found that Ford made a right angle adaptor ostensibly marketed for the hot rod market to use on the small block V8’s allowing for better filter to frame clearance. It’s Ford part number M-6880-A50. It was also standard on some cars so you may be lucky enough to find one in the junk yard. 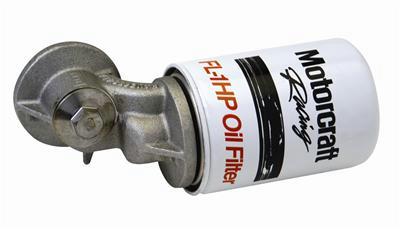 The adaptor installs with a hollow bolt into the original filter location. It is not keyed in any way so you can turn it whichever way you like. I installed mine vertically so when I removed the filter it would not drool on the side of the engine, me, or the driveway for the next couple of days. An unanticipated, but happy, byproduct of the change is that with the filter mounted this way oil pressure comes up faster than before in normal operation. It would appear that the old filters horizontal orientation allowed oil to leak back into the engine once it was shut off for any length of time. Vertical mounting also allows for easy pre-filling of new filters.

I can’t be sure about it but I have been told that this same adaptor may also work on the 2.9, 3.0, & 4.0L V6 engines. But I personally have no direct knowledge of this to confirm or deny it.

A last word of caution, once you install that nice new filter. The total capacity of the system gets increased by approximately ½ quart. So you’ll need to add that much every time you change the oil to bring the level up to full on the dip stick. On my engine it went from 5 quarts to 5 and ½ quarts. Also when you do install the adaptor be sure to carefully clean off the gasket surface on the side of the engine. Then put some oil on the o-ring gasket. That way you’ll have a leak free installation.

So there you have it, an extremely simple 10 minute engine modification that;

A) Doesn’t drip hot oil all over everything, you included, when you change it.

B) Increases the total capacity of the system.

C) Increases the filtration capacity, always a good thing, by at least 30%

There are undoubtedly more reasons you can think of to do it. But those were the ones that prompted me to attempt the “mod”. I haven’t regretted doing it and can’t even think of a good reason not to do it. Can you?