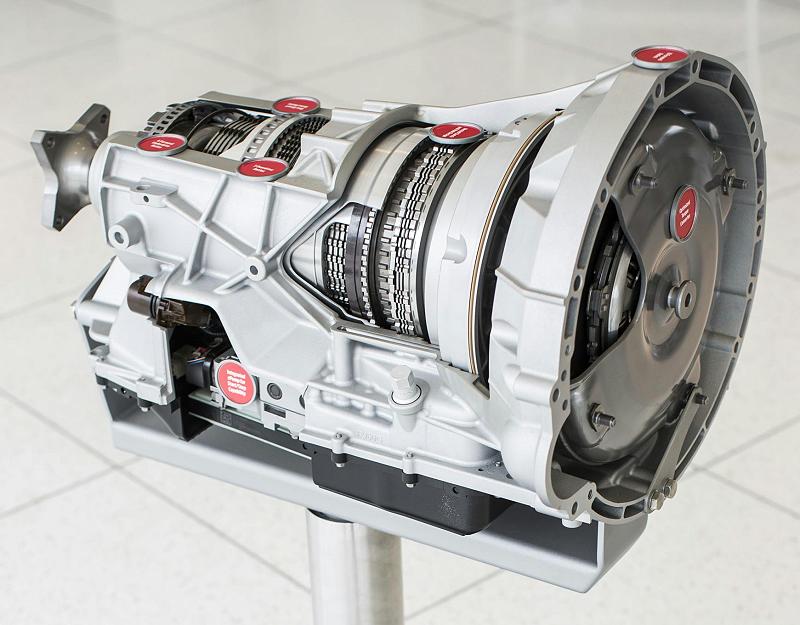 The improved performance is the result of smaller steps between each ratio, maximizing engine power under acceleration, while a wide 7.39 overall gear ratio spread and a lower numerical top gear ratio results in improved efficiency by reducing engine revolutions at highway speeds.

The 10R80 is made at the Ford Livonia Transmission Plant in Livonia, Michigan. 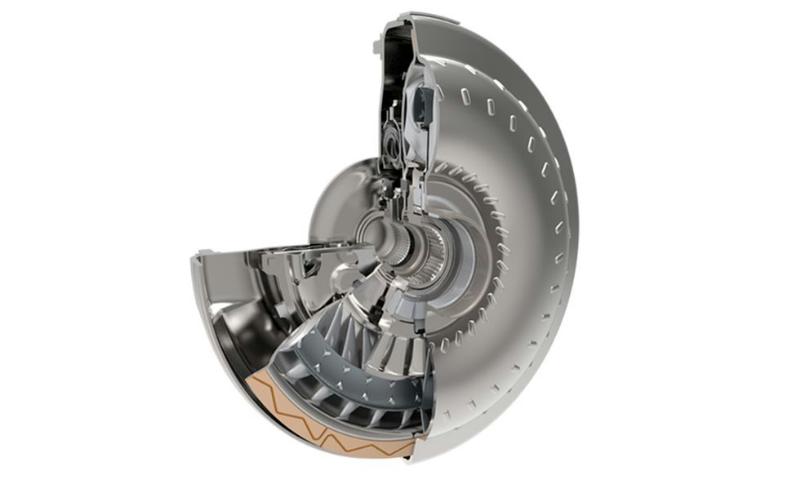 Thanks to the use of four simple planetary gearsets, controlled by six clutches, the 10R80 is only about an inch longer and four pounds heavier than the 6F55 transmission currently used with the 3.5-liter EcoBoost V-6. This required very careful attention to detail in the design of each component. For example, the torque converter in the transmission (pictured above) is about 0.4 inch thinner and two pounds lighter than the one in its predecessor. Part of the weight reduction comes from an aluminum stator support, a formerly cast-iron part. In fact, the new transmission has no cast-iron parts whatsoever.

The clutches in an automatic transmission are hydraulically actuated and controlled, so the new transmission relies on two special pumps to provide the necessary hydraulic muscle. The main pump is an off-axis design with variable displacement. Removing the pump from the transmission’s main shaft reduces overall length; the variable-displacement capability means that the pump’s output can be adjusted to the transmission’s needs, reducing the power that the pump absorbs. A second, electrically driven hydraulic pump allows idle-stop capability. The electrically driven pump is both more reliable and more compact than a hydraulic accumulator, while using very little power.

Just as engine oil seems to get thinner every year, so does transmission fluid, in search of reduced friction. Back when four-speed automatics were the norm, transmission fluid had a viscosity of around 7.5 centistokes. The Ford six-speed uses fluid with a viscosity of 6.0 centistokes. The new 10-speed drops that to about 4.5 centistokes, reducing both friction and the workload of the hydraulic pumps. The new fluid is called Mercon ULV, and is planned to last the lifetime of the transmission, aided by a new filter that has two levels of high-efficiency media and a pleated design with much greater area than the filter in the current six-speed transmission. It also helps that the transmissions are assembled in factories that set new industry standards for cleanliness.

With a low first-gear ratio of 4.696, the torque converter basically aids in a smooth launch, then quickly locks up and stays that way. Shifting is controlled by the six clutches, which engage and disengage two at a time to swap cogs swiftly and smoothly. These shifts do not require the torque converter to unlock, which would decrease efficiency. These clutches are controlled by integrated solenoid valves, which respond more quickly than the usual two-piece designs. The system has also been designed to minimize the length of the hydraulic passages and optimize the clutch designs for quick fill times—all in the interest of faster and more responsive clutch operation. The transmission can also perform large, multi-gear downshifts—directly from tenth to fifth, or ninth to fourth—smoothly and rapidly. There’s also a one-way clutch, which smoothly and cleanly disengages the transmission when rolling to a stop, avoiding a potentially jarring 3-1 downshift.

In addition to the efficient hydraulic pumps and the low-viscosity fluid, there are other measures to reduce the transmission’s mechanical friction. For example, instead of flat thrust washers, the 10R80 uses ones fitted with radial needle bearings, replacing sliding friction with the lower rolling variety. Even the multi-plate clutches get tiny springs which push the plates apart to minimize their drag when they are not engaged. As a result, the new transmission is more efficient in each of its gears than the six-speed it replaces.