The CB (Citizens Band) radio is nothing new to the off-road enthusiast. CB radios have been popular since the 1970’s, they’re cheap, easy to find new or used, and don’t require a license to operate. They are an essential tool when off-roading with friends so you can communicate from vehicle to vehicle. This is especially helpful to communicate about trail obstacles, where you’re going, or where you are if you split up.

While the CB is a cheap form of communication, you have to buy an antenna and then tune it to your radio with an SWR meter. This can be time consuming and annoying. It’s also rare that anyone is going to have a hand-held CB (walkie-talkie) to communicate with you if they’re spotting for you.  Yes spotters use hand signals, but words are still better.

GMRS (General Mobile Radio Service) has been around for a while, and is becoming more popular with farmers, overlanders, and off-roaders. Unlike CB radio, the FCC (Federal Communications Commission) requires that you purchase a license to use GMRS. Unlike ham radio, there is no test to take, the license is good for 10-years, and it allows BOTH you and your family members to use it. As of 2020, the fee for a l0-year license is $70.

The nice thing about GMRS is that you can get small portable radios making it easy to communicate with your spotter when you’re on the trail, or with a friend or passenger (family member) that walks away from your vehicle. When I purchased my GMRS radio, I got the Midland – MXT115AG kit that included (2) portable radios and a charger (below).

A couple of other nice features is that the radio is so small and light weight that you could velcro it to your dash. It also comes with a quick release mount and a 12-volt plug for a lighter / accessory jack so you don’t have to wire it to your truck. PLUS, it comes with a magnetic antenna, so there’s no antenna to buy or have to tune with a SWR meter. 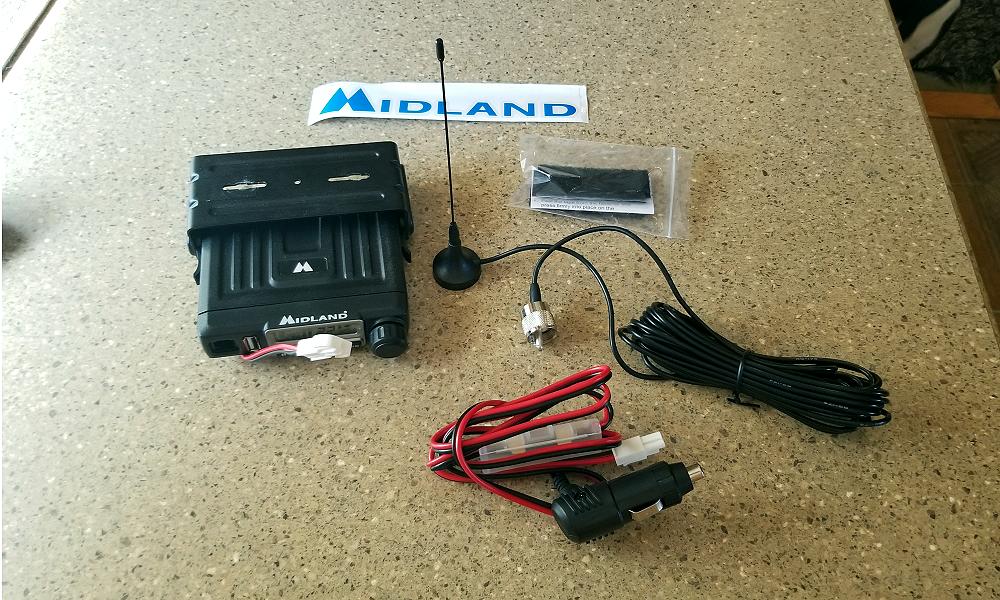 Privacy – The last great thing about GMRS radios are the privacy codes. The MXT115 has 142 privacy codes, and my handhelds have 121 privacy codes. You can choose a channel to talk on and then set a privacy code so you don’t have to listen to anyone else that might be on that same channel. If you’ve ever been trying to use a CB channel that other people were using, then you know what a nice feature this is!

So now that you have some basic information, let’s talk about the differences. 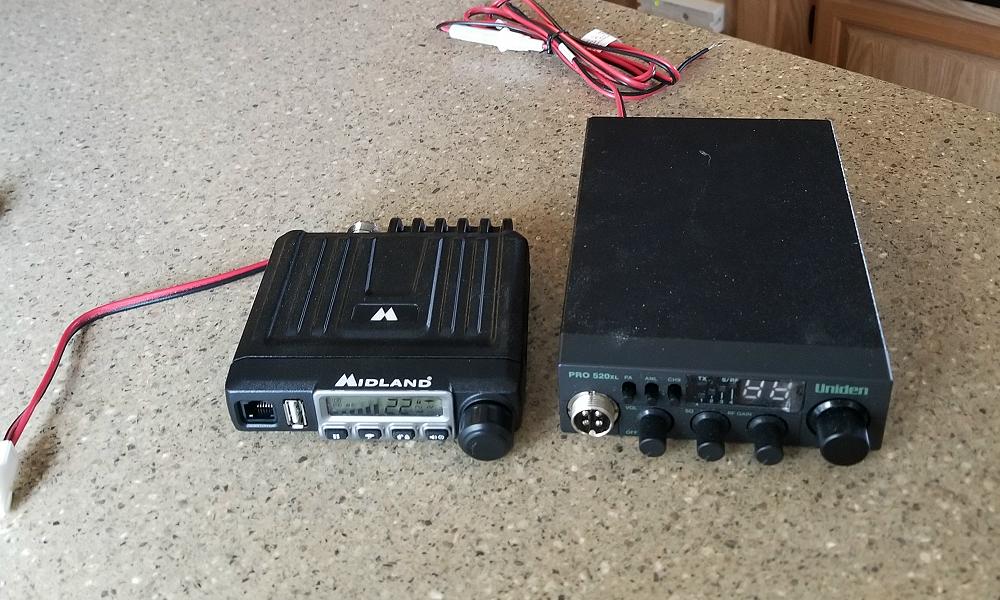 The Uniden PRO 520 is one of the smallest CB radios on the market, and as you can see, the Midland GMRS is much smaller. 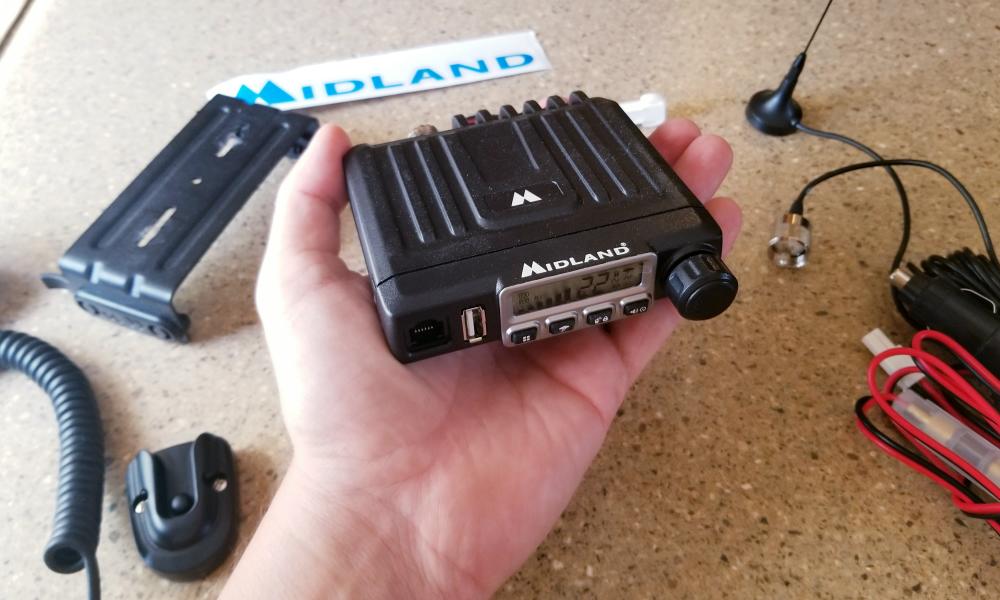 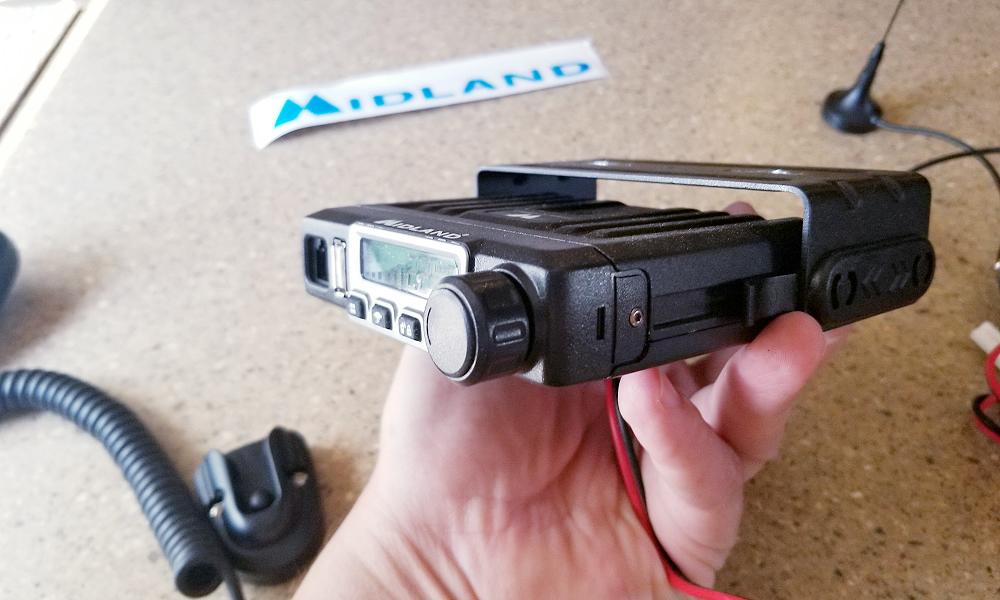 The FCC allows a maximum of 4-watts of output power for CB radios to avoid signal interference with other devices, such as TV and emergency communication radios. Some list the Uniden PRO 520 as 7-watts, but that is the output rating of the speaker, not the transmitter.

The FCC allows a maximum of 50-watts of output power for GMRS radios. Midland offers a 5-watt, 15-watt, and 40-watt mobile radio. Since I anticipated that I would only be using the radio off-roading with friends, I decided that the 15-watt would be the best option. Especially since the 40-watt option was $100 more. 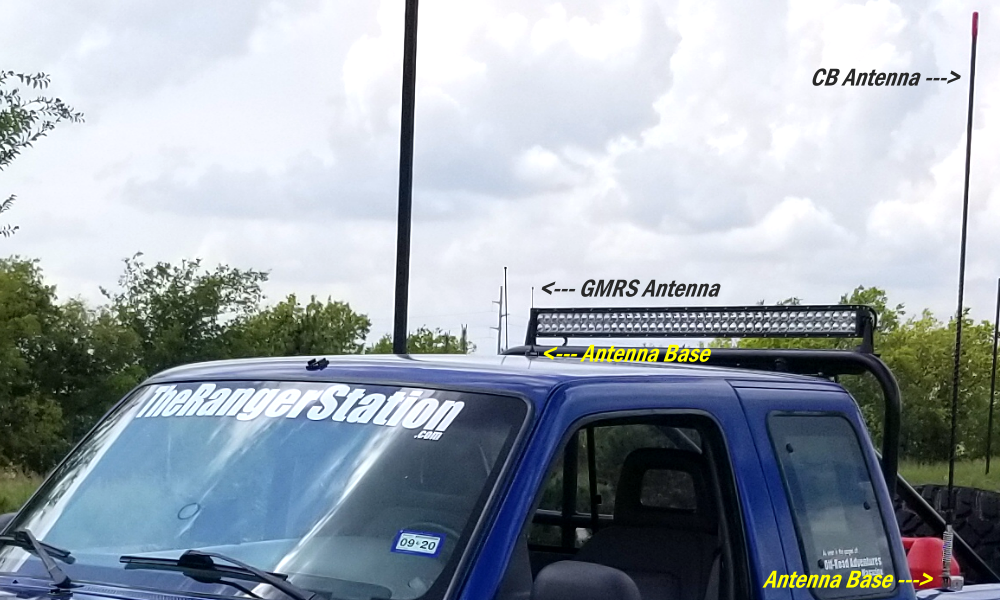 So how does the antenna work?

You can determine the proper length of an antenna by using the formula:

What all this really means is that the GMRS requires a much smaller antenna that you won’t be hitting things with, and that won’t likely get in your way.

Radio Range: Radio range is effected by weather and line of sight obstructions.

Typically a CB radio should have a range of 4-5 miles. However under certain conditions the signal can sometimes be refracted by the ionized part of Earth’s upper atmosphere, which basically means that the atmosphere can bounce the signal back down to earth over the horizon (curvature of the earth) increasing its range. You may have heard this referred to as ‘shooting skip’. This is only possible in the 30 MHz – 300 MHz frequency range. While it’s possible that you could talk to someone 100s or 1,000s of miles away under these conditions, the conditions are very rare. So only expect a 4-5 mile range talking truck to truck. 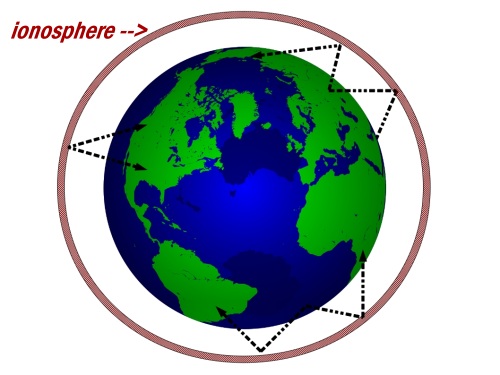 Another great thing about a GMRS radio like the MXT115 is that is has repeater channels. A GMRS repeater is an automatically controlled transmitter and receiver that simply transmits what the receiver hears. By placing repeaters at sites with high elevation and antennas atop large towers, workable coverage is greatly increased. This means that you can talk an even greater distance if a repeater hears your signal and re-transmits it. 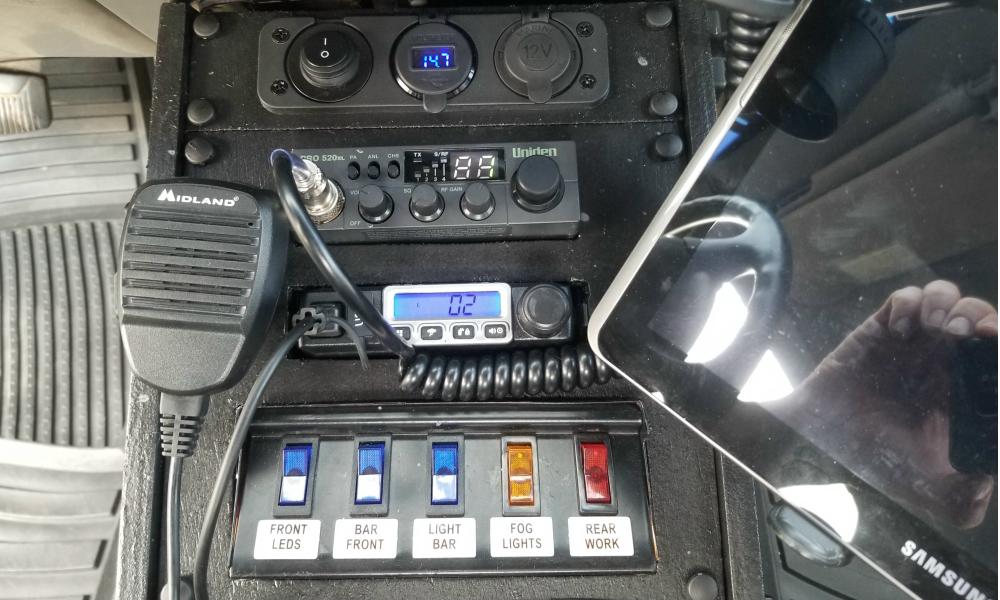 Here’s a comparison in costs for the CB radio and GMRS radio I personally use:

I could have saved some money and just got a Wilson Lil Will magnet mount antenna for $50 and been all set up for $90.00, but I wanted the performance and range of the Firestik. I also could have spent up to $150 on a better CB and had anywhere from $200 – $288 invested.

I also spent the extra money and bought coax cable and a NMO antenna that mounted in to my roof so I didn’t have to deal with a magnetic base antenna and the wire. This means I drilled a small hole in to my roof and permanently mounted the antenna. The nice thing is that I can unscrew the 6-inch antenna and replace it with a 1/4-wave 2-foot antenna for better range in less than a minute.

Why Not Use Ham Radio Instead Of GMRS

How Do I Get A GMRS License?

You can apply for your FCC GMRS license online.

Then go here to apply for the license online:

Just follow the prompts. Basically just wants your name, address, and SSN. Then gives you a link to pay online when you’ve submitted the form.

Once approved, the FCC will email you an authorization link where you can download a copy of your license.