LED Lighting For Your Truck

One of the newest form of ‘technologies’ to pop up in the automotive world is the LED or “light emitting diode” lamp. A light emitting diode (LED) lamp is essentially a semiconductor diode that emits a single color (monochromatic) light when operated in a forward based direction. An LED lamp consists of the die or light emitting semi-conductor material, a lead frame to support the die, and an encapsulation epoxy which surrounds and protects the structure.
While all diodes release light, most don’t do it very effectively. In an ordinary diode, the semiconductor material itself ends up absorbing a lot of the light energy. LEDs are specially constructed to release a large number of photons outward. Additionally, they are housed in a plastic bulb that concentrates the light in a particular direction. As you can see in the diagram, most of the light from the diode bounces off the sides of the bulb, traveling on through the rounded end. LEDs have several advantages over conventional incandescent lamps. For one thing, they don’t have a filament that will burn out, so they last much longer (50,000 hours). Additionally, their small plastic bulb makes them a lot more durable. Their small size also makes it possible to put efficient lighting in a small area.
The main advantage is efficiency. In conventional incandescent bulbs, the light-production process involves generating a lot of heat (the filament must be warmed). This is completely wasted energy, unless you’re using the lamp as a heater, because a huge portion of the available electricity isn’t going toward producing visible light. LEDs generate very little heat, relatively speaking. A much higher percentage of the electrical power is going directly to generating light, which cuts down on the electricity demands considerably.

Up until recently, LEDs were too expensive to use for most lighting applications because they’re built around advanced semiconductor material. The price of semiconductor devices has plummeted over the past decade, however, making LED’s a more cost-effective lighting option for a wide range of situations. While they may be more expensive than incandescent lights up front, their longer life and lower power usage can make them a better buy in the long run. In the future, you’ll see more applications of LED’s in automobiles.

Which Bulbs Does My Truck Take?

Check out the links below:

Click HERE to identify the bulbs in your vehicle.

An LED Cross Reference For Some Car Bulbs

When upgrading the stock halogen / incandescent bulbs to LED bulbs, the new LED blub will share the same numbering as your vehicles original. Below are the bulb sizes for 1983-2011 Ford Rangers. This is for reference only. Your owners manual will list the bulbs your Ranger uses.
Or, you could use the Bulb Replacement Guide to identify the bulbs in your vehicle.
Exterior:

LED’s really hit the automotive world with safety vehicles. Safety vehicles have gone from big sealed beam bulbs, to smaller halogen bulbs, to strobe, and finally LED. LED has a longer life than all the previous lighting options, are brighter and more reliable than strobe, don’t have any mechanical parts, and their small sizes are allowing LED emergency lights to be placed in small spaces.

Another nice feature about the LED lights, is that they can appear completely clear and hide their color until turned on. LED’s that emit different colors are made of different semi-conductor materials, and require different energies to light them.

LED’s and Your Trucks Interior:

So how does this effect you? Enthusiasts have found that they can get replacement LED’s to replace interior lighting that allows the opportunity for different colors and brighter light. Unlike traditional bulbs, LED’s don’t generate a lot of heat that could melt the light housings and or lenses if you add a brighter light.
You can replace pretty much any type of interior light with an LED. Here are some samples of interior lights: These Single-LED bulbs (above) are 12 Volt Super Bright LED bulbs which will replace T3-1/4 (#194/168) filament bulbs found in many automobile and water craft applications. Inverted cone clear lens causes the light to emit from the sides as well as the end. Built in current limiting resistor and diode to protect the LED from reversed polarity installation. These bulbs are polarized so if you plug them in and they don’t light, turn them around in the socket and they will light.

These 4-LED bulbs (above) are the same size as the single led wedge base bulbs (replace 194 and 168 bulbs) but have 4 smaller LEDs instead of one large LED. They are brighter but project all of their light out the end so are better for applications such as interior map reading lights. You have to make sure they are 12-volt LED’s. The 12-volt LED’s have a built-in resistor for 12 Volt DC operation. Some sites will tell you how to properly solder in a LED bulb with a resistor to work on 12-volts. Save yourself trouble and just go to the parts store and get a 12-volt LED with the resistor already wired in.

LED’s and Your Trucks Exterior:

You can also get Bayonet style lights for things such as turn signals and brake lights. Turn Signal Note – One load resistor is required for each turn signal bulb. A 6 Ohm, 50 Watt resistors should be connected across the turn signal bulbs to simulate the load of a regular filament bulb (2 Amp load). This will solve LED related turn signal problems such as hyper flashing or burnt out bulb indications. Resistor Note – It was brought to my attention by forum member ‘Robert_1967’ that a Bussmann BP/232 Super Heavy Duty Electronic Flasher can be used for your turn signal flasher instead of adding a resistor to your wiring. Just replace your regular small silver turn signal flasher with this BP/232 and you wont have to splice a resistor in to the system. For side marker lights, see the wedge style bulbs in the section above.

You can also get complete replacement assemblies from company’s like IPCW. A nice option is replacing your trailers taillights with an LED version. You can also get LED’s in a variety of marker lights.

LED’s are great for off-road vehicles. When your running bright off-road lights at night and/or winching, you know how much current your vehicle is drawing. LED’s use less power creating less draw. The disadvantages to traditional lighting for rock lights are:

The Vision X Tantrums are small, waterproof, and don’t draw a lot of power.

Looking to light up the night off-road? Vision-X introduces a first in LED lighting technology with its Xmitter LED Light Bar. Designed for on and off road use, each weatherproof low profile light bar produces tremendous light output, with a 12″ bar producing 3600 lumens, 100 more lumens than a 35 watt HID while drawing only 4 amps and boasting an astonishing 292,000 hour life span. .A nice thing about these Xmitter’s is there broad beam versus the traditional ‘spot’ beam pattern of off-road lights. Above is just high beams. Below is with a 42″ Xmitter Notice how broad the path of light is.

Although the prices for LED’s have come down making them more popular for vehicles, they can still be pretty pricey for off-road lights depending on the ‘brand’ you choose.

I have been using LED lights on my trucks for several years now. My 1996 Ford Ranger 4×4 (TRS-2) has a 40-inch Nilight LED lightbar on the bed cage, and Nilight LED spot and fog lights on the front bumper. It also has (2) Nilight LED flood lights in the back. I use this brand because they’re very economical, and I’ve never had a problem with them. I couldn’t see spending a lot of money for off-road lights that aren’t going to see a lot of use. Now if this was an off-road racing vehicle speeding across the desert at night, I’d invest in the more expensive brands. 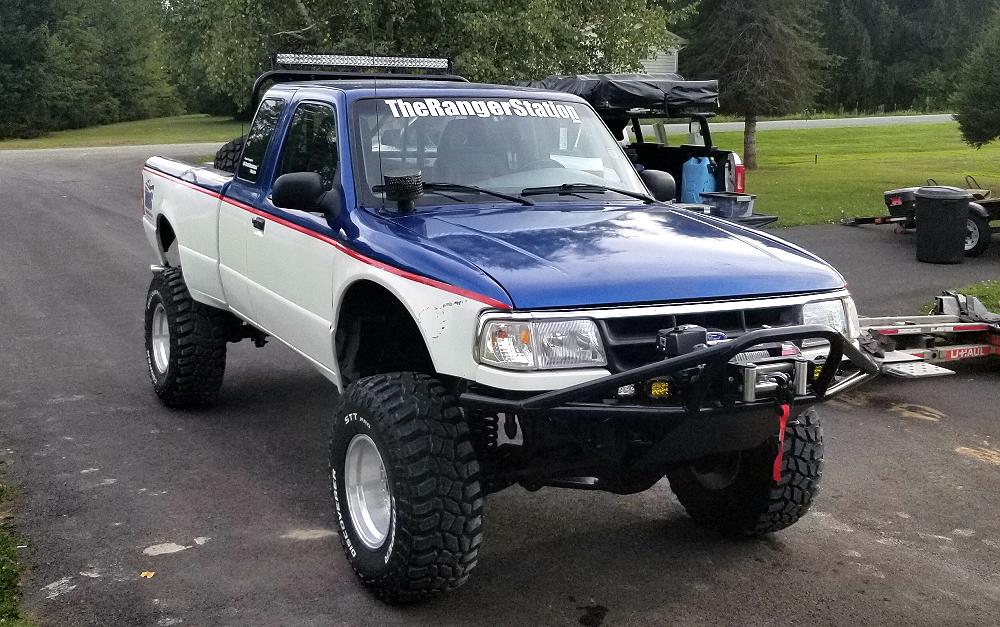 I also upgraded the dome light, map lights, and dash lights with Sylvania LED bulbs. I avoided the cheap Amazon LED bulbs for the interior. Especially when I replaced my dashlights. Some of those cheap LED’s don’t have a record of lasting very long before they start to go bad and flicker.  The last thing I want to do is have to take my instrument cluster back out to replace them. Here is a comparison between a 192 dome light bulb nd a 192 LED bulb. 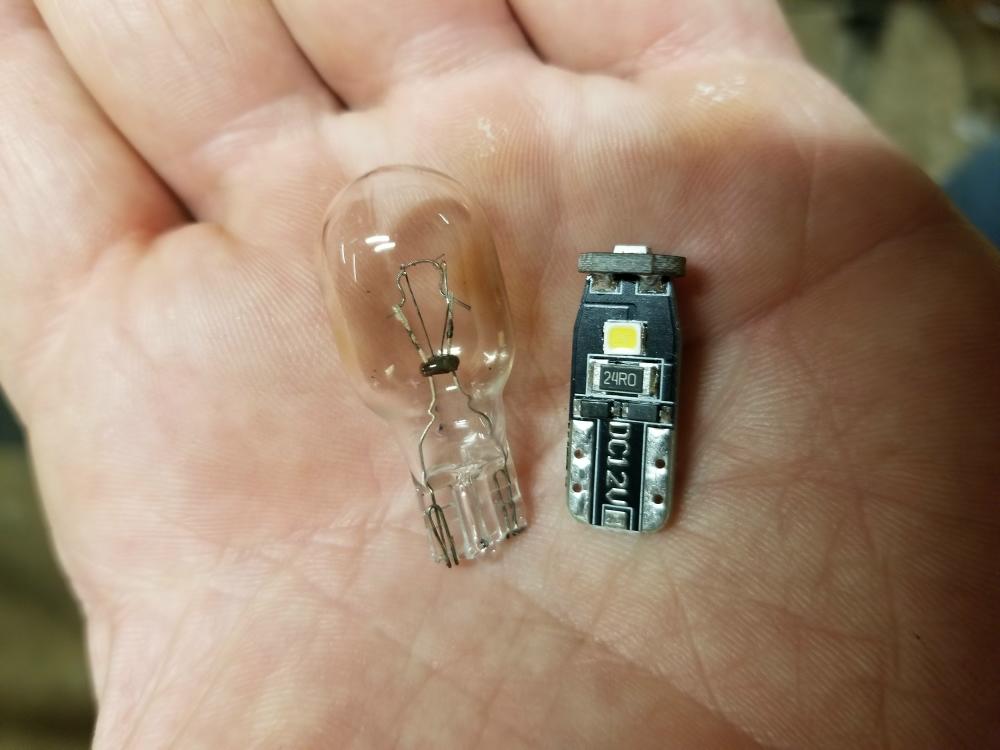 I equipped the 2019 ‘Loan Ranger’ that I completed the Trans America Trail in with a Nilight LED lightbar on the front bumper, and (2) Nilight LED spotlights on the hood. 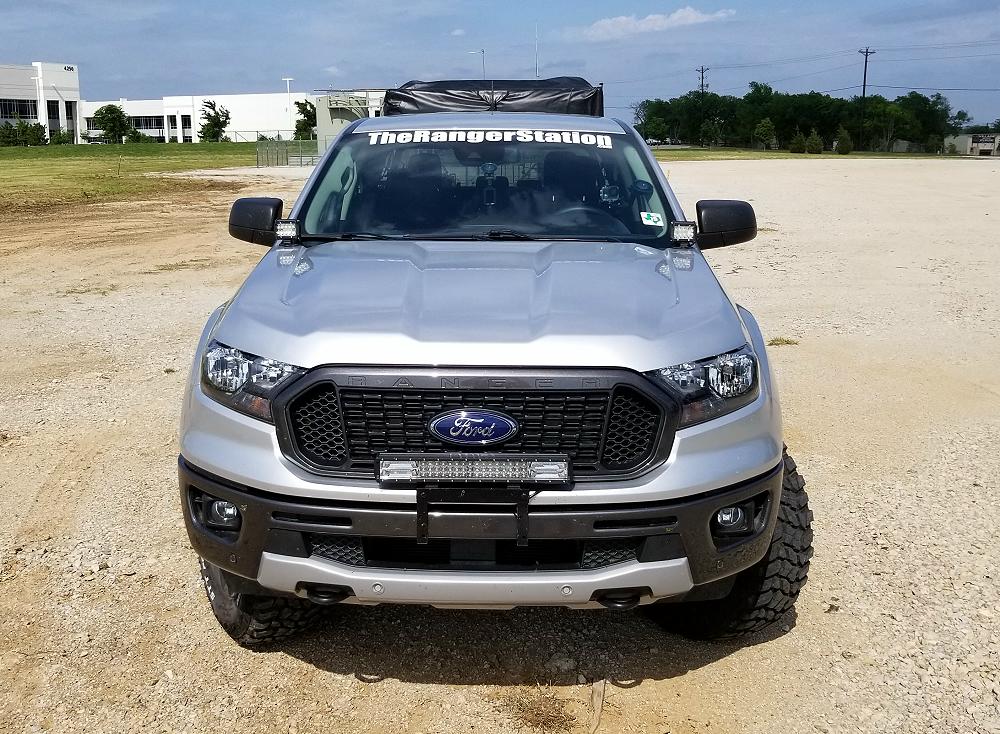