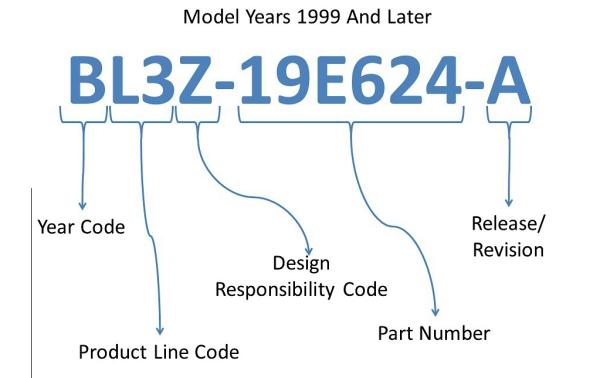 Due to this the part numbers on the part are generally Engineering numbers and the Service part number will be on the box. There are some exceptions, such as a whole grouping of parts or a kit. Engineering and Service numbers decode the same way.

The difference is the 4th character of the prefix. Part numbers consist of a;

The 1st character of the prefix indicates the decade of design;

The 2nd Character of the indicates the year within the decade. F1 would represent 1991.

The 3rd character of the prefix indicates the Product Line (See chart below) the part was originally designed for, with few exceptions. Note that “outside sales (code F), “Motorcraft Brand” (code P), or imported parts from Ford of Europe (code R) are identified with their product line code in the third position. In this example, the 7 = Ranger.

The 4th character indicates the Part Source (See Source Code chart below), whether it is product engineering office or service part. In this example A= Light Truck Engineering.

The next group of numbers describe the part.

Date codes are sometimes included on parts. The 1st digit is the last number of the year. To determine the decade, refer to the part number’s prefix. The 2nd digit is the month. Note that the character “I” is not used. The months are;

The 3rd digit is the day of the month.