Why did you choose a Ranger?

Mr. Rogue beat me to it.

My mother in law needed money for surgery, but wouldn't take an outright gift. But they had this Ranger sitting in the yard that hadn't really been driven in about 10 years. I overpaid for the Ranger. But I saved it and the mother in law got her surgery.

I always had big heavy duty trucks. I said it when I first joined, I helped a friend get the 87 4wd from Greenville, SC to Atlanta with a blown engine and he ended up giving it to me. My car collection over 50 years is evenly split between nice cars I bought and drove, and things like this that I had to bring totally back to life. The ones you fix and create always mean more. As I was searching for parts, I bought the 97 2WD to keep and modify, and I bought a 93 and another 87 for parts. And the 93 will actually get going again and I have a potential buyer who wants it and needs it who’s a member. I’ll let it go to him for little money, you get what you give.

I’ve realized these are great little trucks, but I am still a little surprised that broken 87 could push my F250 all the way to Atlanta! 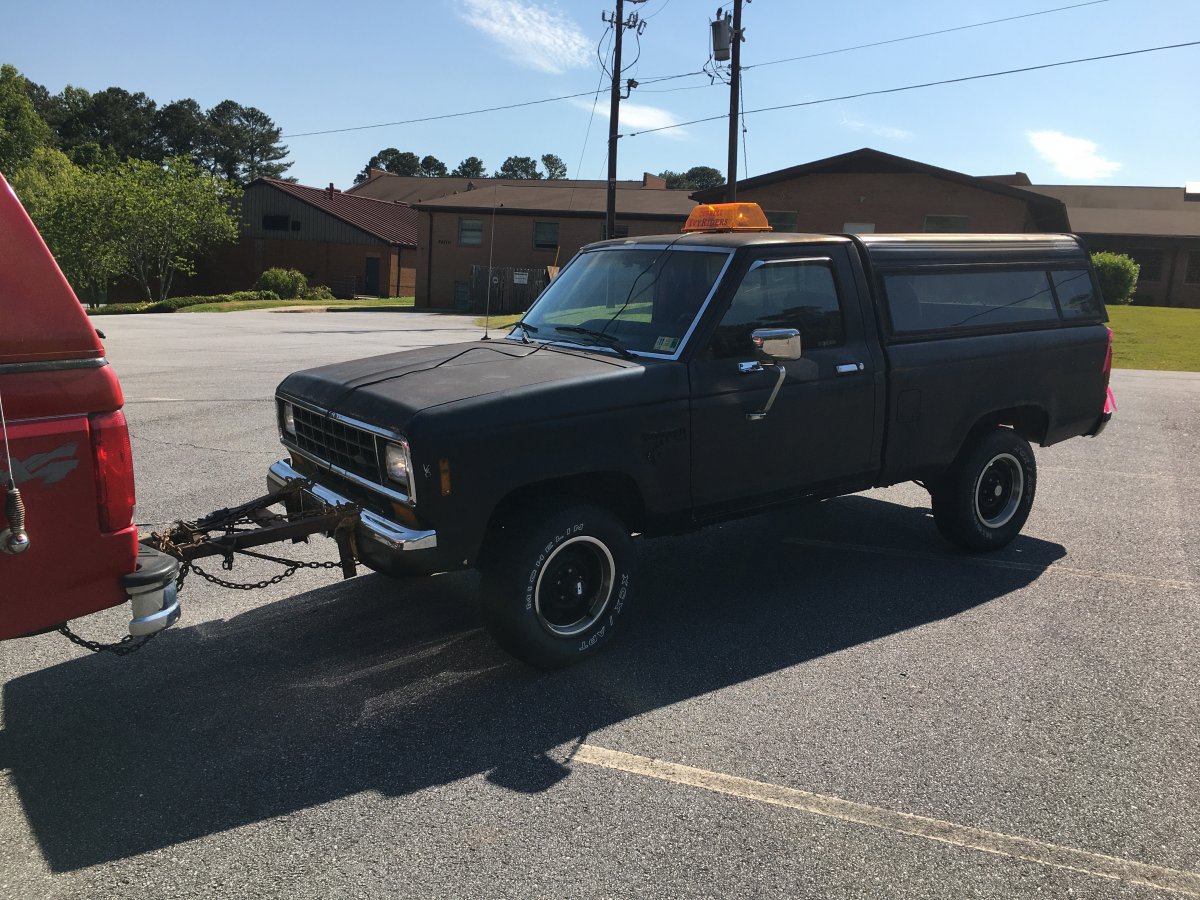 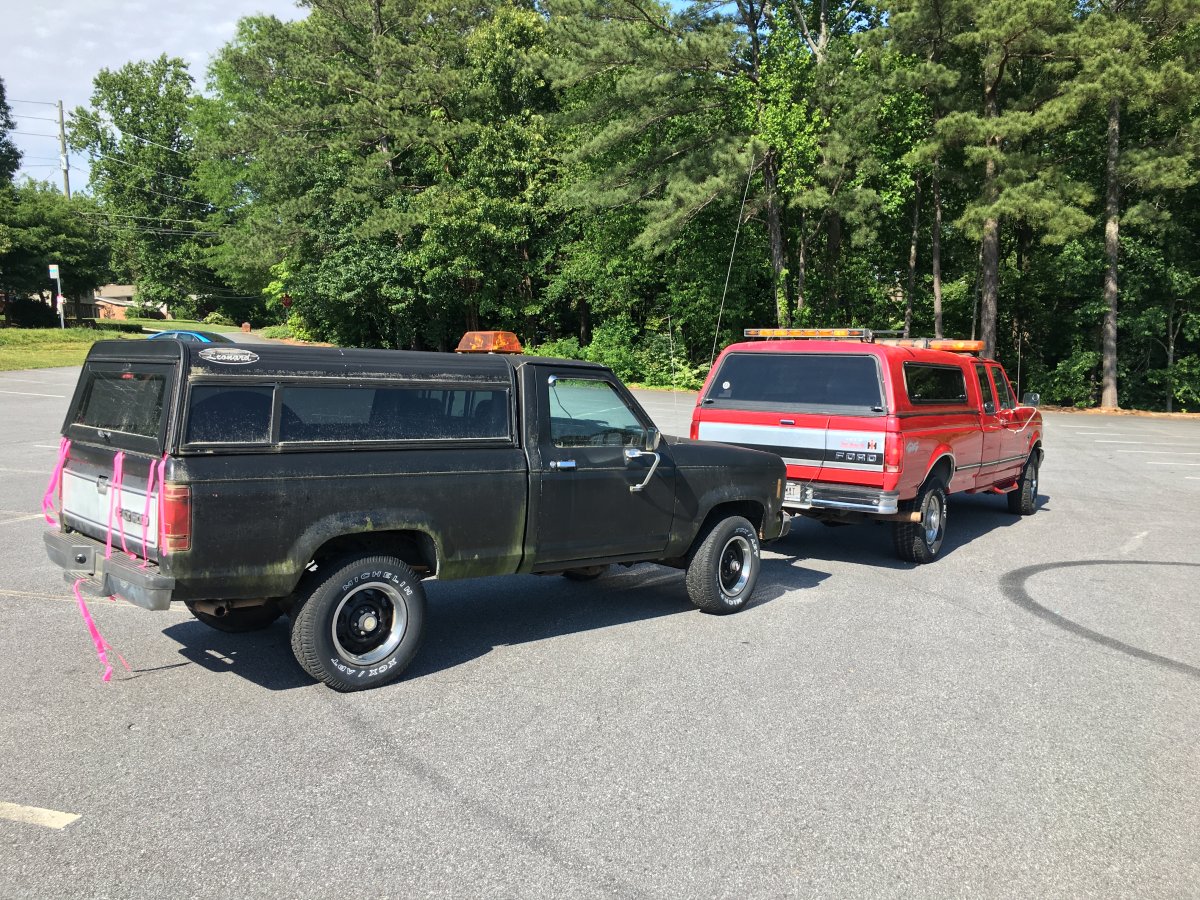 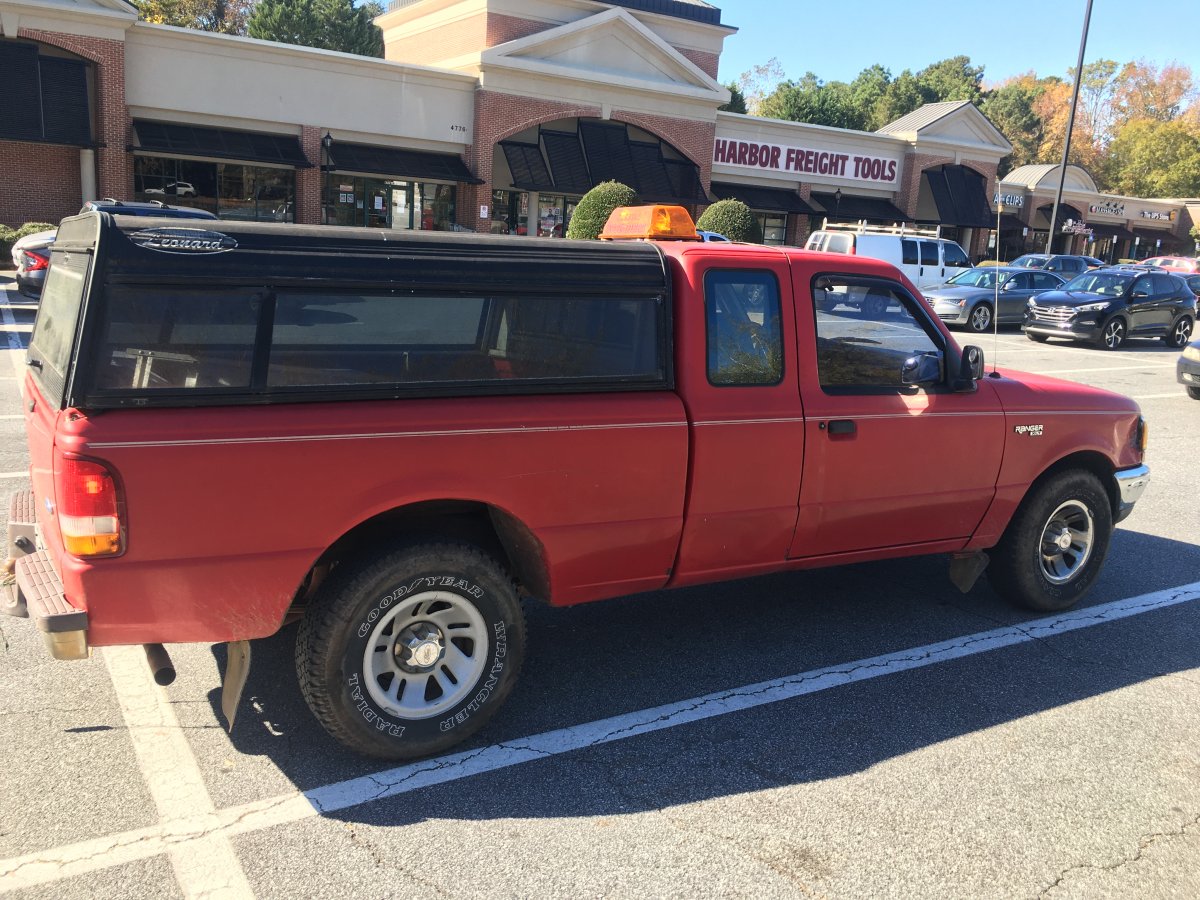 I’ve also realized these are probably my last projects, the old gray mare & knees and all that. And yep, it’ll all go to my son and my daughter and her vet husband when I go to the junkyard in the sky, God willing and merciful, although I’m not sure what my daughter’s family will do with her’s in Manhattan. I think the truck is bigger than their apartment!

Why did we choose a Ranger? The Ever Increasing Plethora Of Dumb Ass Drivers On The Road.

There's a road we take to Cripple Creek once a week. (2) lane highway, 65 mph speed limit. Some dumb ass passed us, with a car headed toward us in the other lane. I got on the brakes hard, as did the guy coming towards us. The dumb as cut in front of us with inches to spare. We were driving our 2002 Tacoma.

That's when we decided we needed a vehicle with side airbags and really great crash test ratings.

We looked at Tacoma's, Ranger's, Pathfinders and Colorado's. We researched the hell out of them all on the internet. Once we test drove them the Ranger was hands down the best mid size truck available in 2019.

Having had great luck with Tacoma's since 1995 we were nervous about buying a Ford in regard to trouble free longevity. Thus far we've had 13,000 trouble free miles in our Ford.

Bought a B4000 brand new from a dealer who was running a big ad..... no idea it was a rebadged Ranger. Just needed a truck.

23.5 years later, it's been a lot cheaper and easier on my nerves than the exes, and outlasted them all..... LOL

Come on yall. What about the B-U-TIFUL oval on the front, with those 4 magical letters? ENOUGH SAID!

Thanks for all your answers guys.
I was curious.

Bought mine because my buddy had good luck with all of his higher mileage ones for 10+ years. I got to see what headaches he had to deal with, figured they weren't so bad. Dove on in.

My current Ranger is my 4th one. I bought my dad's 83 from my mother after he died because it needed another valve job and I didn't want her to have to sell it dirt cheap. I fixed the sticky valves he caused by dubbing it around town, thinking I'd sell it in the spring. Six years later my kids were getting too big to ride to school comfortably with me so in 94 I bought an F150. In 2004 I decided to buy me first new Ranger because my daughter's college tuition was ending and I figured I might as well not get used to having any money. The 04 was a 4 door supercab 4x4 with a 4.0 sohc and a 5 speed with manual about everything and a flareside box. I had no plans to replace it in 2011 when my salesman came out and told me about the $5000 rebate, so I bought one of our last 2011 supercab 4x4's, this time with power windows, locks, and mirrors. After my wife joined me in retirement I sold my 2011 and built the 93 I have now. It's getting tougher to climb in and out of my Mustang and I've always wanted to build a street rod but knew I didn't want to clean a street rod. The 93 is a regular cab, 2wd, long box that I didn't realize was lowered when I looked at parked in a car trailer. It's now a 351/C4 with an 8 inch rear and Vintage Air.

When I bought mine new in '94, I had looked over the Ranger's underpinnings and compared it with all what else was available at the time:

Ok, so there were a few other things that also sold me on it (among other things, the nicely-appointed interior, and the torque of that 4.0L V6), but being that I bought it with a lot of camping and 4-wheeling in mind (I guess nowadays they call it "overlanding"), I wanted something that would be durable over the long haul, and this one looked to be it. Indeed, it has served me well.

My buddy was trying to start a 4*4 off road race circuit and convinced me to spend the money I was saving from quitting drinking and smoking. The first truck I found was a rollover ranger for $200.00. The rest is somewhere on TRS.

PS: my avatar pic is the result of my first ever race....

alwaysFlOoReD said:
My buddy was trying to start a 4*4 off road race circuit and convinced me to spend the money I was saving from quitting drinking and smoking. The first truck I found was a rollover ranger for $200.00. The rest is somewhere on TRS.

PS: my avatar pic is the result of my first ever race....
Click to expand...

So you bought a rolled over truck and never bothered to flip it right side up before trying to race it?!
Last edited: Jan 17, 2021

I've had 7 Rangers going back to the early 80's . They are so much more comfy than an S10. They drive better, They are kinda like the New Mustangs And the new Camaro's. I own an 18 GT but I tried a Camaro SS first. 5 Seconds in the Mustang and I knew it was the car. Feels so much more solid and responsive, seats are more comfy, better driving position, better vision. Better vehicle.

Dirtman said:
So you bought a rolled over truck and never bothered to flip it right side up before trying to race it?!
Click to expand...

Well yeah! Who wants to go to all the work of flipping it right side up when you can go race and flip it again?!?!

My previous truck was a gas hog (12 mpg) and we needed something more economical yet able to do truck things. (I had an S-10 two trucks earlier that was so light duty, I had the frame on the axle way too many times.) Add the fact that I preferred the looks of the Ranger over the S-10 in the 80's when I was a teen in Detroit and that's why I chose a Ranger.

For me, it was something that ran that was in my price range.
I'd owned a Mazda B2200 forever at the time, but it either cracked the head or blew a head gasket (or both). I'm getting to a point in my life where I just don't feel like playing around under the hood anymore.
The truck was getting kinda old and I foresaw bigger problems on the horizon (not that it was in bad shape, at all), so I figured it was time to let it go.
Found my current truck online (CL I think), went for a test drive. It didn't seem to be in too bad of shape, so I snagged it.

Ahh... the saga... I’m going to gloss over some of the details because tapping this out on a tablet won’t be exactly fun...

So my first vehicle was actually a brand new Ranger. I had been looking for awhile, I liked sports cars (dad said absolutely not), I liked Jeep Wranglers (they were wicked overpriced), so my choices were either Ranger or F-150. Used was mostly either junk or so expensive that you might as well buy new. Looked for months. Then my parents surprised me by bringing home a new 2000 extended cab Ranger. 2wd, 3.0, 5-speed. I got the keys and the payments. Of course, being a dumb kid I didn’t take care of it like I should have and it ended with sliding it off a slick road into a tree back around 07 or so. Still have the truck.

Not long after I got the truck I stumbled across this site and never really left. I was interested in off-roading and tried taking my 2wd out a couple times without a lot of success. Bought my 88 B2 off a former member on here For $340. He put it on eBay for a starting bid of $70 with no reserve. After I bought it, I realized it was about 700 miles away, so the Ranger towed it back. Got about 2 months of driving it before it ate a valve.

Choptop was bought from a former member (Farva, aka Sherrodwannabeb2) intended for parts for my 88, but the body was in great shape (2.9 was blown up and it was 2wd), so with the help of TRS it became what it is today. Still a tad hard on motors though.

Bought and scrapped an 86 Bronco II from another former member. Still have most of the pieces. Some of them are still in the choptop.

Bought, fixed, drove and sold an 89 Bronco II at college.

Bought an 89 Ranger with a bad frame, still have from the cab forward.

My 95 F-150 was bought to replace my 2wd Ranger since I needed a work truck. It was my DD for a number of years right up to my hip surgery because someone ran a red light and clobbered me while I was driving the father/son project which was dad’s 2000 Ranger that we did the 5.0 AWD swap to.

Bought my green 2000 Ranger to be my new DD while I recovered from surgery because I needed an automatic. The only auto I owned was my 88 and it’s still in pieces. I had wanted a pickup or SUV and a Ranger suited my needs and wants. Plus I already had spare parts.

F-350 was dad’s and I could use a dump truck for my property. It was supposed to be my work truck before my whole hip injury.

Was given a 97 Explorer. It needs some TLC. Was going to use it for my 5.0 swap in my green Ranger, but ended up with a different donor.