What is wrong with my locking hub...?

Long story short, I've been having this intermittent strange noise coming from the passenger side while I'm driving. I've been trying to figure out what it is, and today after replacing the front wheel bearings I noticed this. Spinning the tire by hand sometimes the locking hub would make this clicking sound, and then it will go away after a few seconds. I messed with it some more and it seems like when I locked the hub it wouldn't do it, then when I unlocked it again what you see in the video would happen.

Any thoughts? I don't want to go and spend hundreds of dollars on new locking hubs if I don't have to.

Its not fully unlocking, so the the axle shaft is sticking out too far or the sliding lock is not coming out far enough, I know duh
The "clicking" is the axle splines and/or hub splines touching every now and then

That sounds to me also like something in the hub isn't engaging or releasing right (though it's not possible for the axle shaft to stick out too far unless the seal at the rear of the spindle is hosed, which that may be something to check for as well).

If the seals are fine, then I'd suggest pop the guts out of the locking hub and see if maybe some water might've gotten in there and made for some rust. Unless it's severely rusted, you should be able to clean things up and then reassemble it with a very light coat of bearing grease on things (no more than a light coat though, as too much grease inside the hub could cause this same issue too).

A pic showing parts you'll find inside the hub (there isn't really much to them): 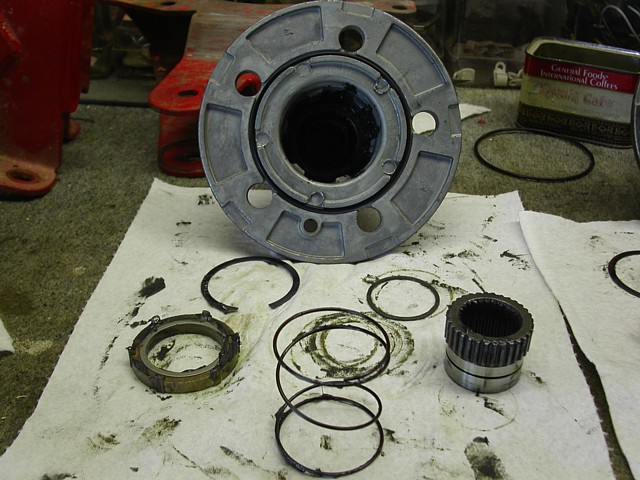 I think I figured out the issue. As strange as this sounds, I believe the new rotor I got was machined wrong or something. I took the wheel back off today and I noticed that I couldn't fully push the locking hub onto the face of the rotor, there was a small gap all around, something like 1/16"-1/8". It felt like something was stopping it from seating all the way down. (hopefully that makes sense, I should've taken a picture) For kicks, I still had one of the old rotors so I swapped that back on and the hub will now seat all the way down on that rotor. I took it for a test drive after and the noise I'd been hearing while driving didn't reappear.

But, when I had the truck in the air the locking hub still did make that clicking noise occasionally, however now it was much much quieter. I did notice when I had the hub off though that the part inside of the hub with the splines could move in and out quite a bit. I don't recall the hub on the other side doing that, so I'm not sure if that's broken and that's the cause of that. However, the hub still seems to lock and unlock properly, so for now I'll probably just keep running it and if it ever does fail maybe I'll just dish out the money for the Jeep hubs.

My hubs do this as well on my 93 explorer, they only seem to fit in one orientation, just try turning and seating the hub changing the hole the lugs go through till it properly seats.
You must log in or register to reply here.
Share:
Facebook Twitter Reddit Pinterest Tumblr WhatsApp Email Link