Put the Ranger back on daily driver status as the Buicks front brake pads are on the wear sensors. Got about 55k out of the powerstop ceramic pads with drilled and slotted rotors

Gonna take Rockauto a week to ship me replacements and since I don't really want to replace the rotors, the Buick gets a time out.

Bonus, driving the Ranger blew some of the accumulated leaves out of the bed.

sgtsandman said:
I know the 2.3 Ecoboost in the Focus had some head gasket issues. I think they changed the gasket design to fix it. It also was boosted to 310 hp instead of 270 hp. So, that could have been some of the issue.
Click to expand...

My point was there isn't a manufacturer on earth that's immune to common, annoying failures scattered throughout their lineup. Whether the vehicles made by USA, Japan, Britain, or dirty ol south korea.. chances are it's going to have issues. Especially if it's a brand new model/motor/trans/whatever.

Christ.. something like 93% of Bentleys sold need warranty repair done in the first year of ownership lol.

Today my ranger followed its younger (but much bigger) brother through the DQ drive thru. 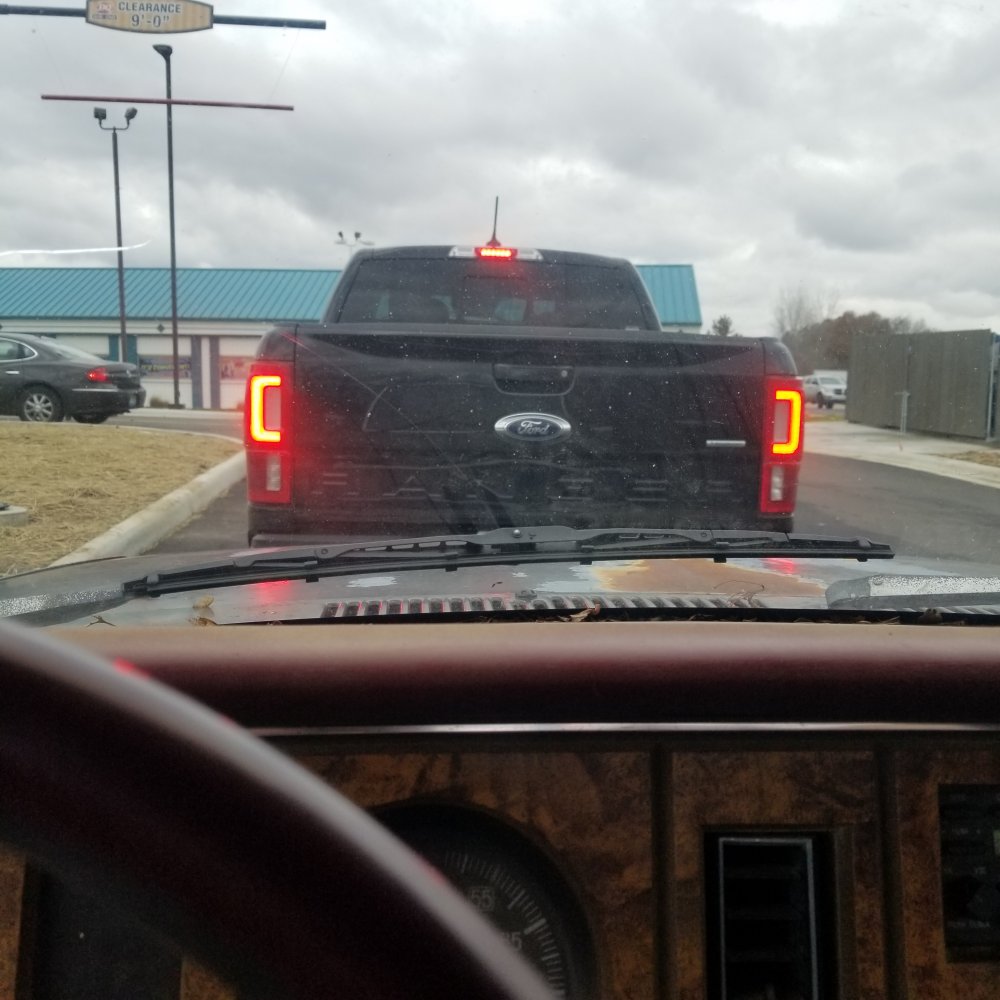 Blmpkn said:
My point was there isn't a manufacturer on earth that's immune to common, annoying failures scattered throughout their lineup. Whether the vehicles made by USA, Japan, Britain, or dirty ol south korea.. chances are it's going to have issues. Especially if it's a brand new model/motor/trans/whatever.

Christ.. something like 93% of Bentleys sold need warranty repair done in the first year of ownership lol.
Click to expand...

Well that's not the right intake to be under the hood of a Bronco II...

Well that's not the right intake to be under the hood of a Bronco II...
Click to expand...

Changed out the battery. The old one was from 2017.

Got some plumbing supplies with it.

Parked my ranger at my friend's place in the mountains for 2 days. Borrowed their SUV and took a nice little road trip in the rural parts of southern California. I drove their 2017 Ford escape with a 2.0 turbo engine, what a cool suv, great cruiser, comfortable all around. Couldn't resist at one point..was the only one on a open hwy that went for miles, floored it and went to 120 quickly and kept it liked for 3 miles, I was impressed.

drove the kid to and from school/ABA each day this week.

Blew more leaves out of the bed driving it

More leaves fell into the bed while sitting in the driveway between uses.

Not sure if I am winning the battle of leaves by driving it yet...

Ordered a new radio for it.

Located a topper for mine. Ill be picking it up after work tomorrow then sanding and painting this weekend. Next is to hunt down a Nissan Xterra in a junkyard to rob a roof rack.

Location
Above the equator

Got tired of the phony vent in the center after 13 yrs & made the space useful by adding a clock. Came out pretty good.
The vents pop out pretty easy with a plastic spudging tool & a small screwdriver.
I bought a $3 travel alarm clock & took it apart to remove the snooze/light button & bulb. Also the alarm hand. Removed the white dial from the movement &
took it to a FedEx printing center to print the dial inverted (45¢ a copy). First I had to blacken the green dots on the dial with a fine point Sharpie & trace the edge
& center hole on an index card so they would come out white. I also had to paint the hands.
I didn't use the front trim of the clock. Instead, using a piece of scrap plastic I cut a plate using the fake vent as a template. Then I cut a hole in the plate for the clock window.
The movement mounted well with 3M mounting tape & some scrap plastic & epoxy to raise the movement so the dial would be centered up & down.
The front of the dial & movement butts up with the back of the clock window which I pressed through from the back of the plate. I went to my local hardware store &
picked up an O ring to use for trim around the clock window.

Right now its running on a AA battery & thats ok but I have a DC buck step down converter on the way & I'll give that a try so the truck can power the clock.
I also have some 12v 3mm blue LEDs on the way & I'll put 1 in & tie in to the dash light circuit. If it's too bright I'll figure something out, maybe a different resistor.
I'm not sure if the LEDs I'm getting are dimmable with the light circuit but I really never dim the gauge lights anyway.
I can't adjust the time from the front of course, but it's a quartz movement & as I mentioned the vent panel comes out fairly easy.
As for replacing the battery, let's hope the converter works out ok.
I have some improvements in mind but this will do for now. I wish I took more pics but I was too busy having fun with this !

"Project Dashboard Clock" Finished !!
I got the buck converter in along with 2 LEDs @ 12 & 6 o'clock. Clock runs very well & keeps good time. LEDs dim with the headlight switch (Tied into Instrument Panel Illumination circuit).
To run the wire I straightened a coat hanger & poked it through the hole for the FWD switch harness end (Battery disconnected, of course) toward the left toward the steering column & then
worked the end to the fuse box. No restrictions ! I Attached the wire to the coat hanger then pulled the wire up to the hole.
For powering the buck converter/clock movement I used a piggy-back fuse holder with a 1 amp fuse for it along with the 15 amp on the Premium Radio Amp circuit.
I guess back in the day you could order a premium stereo package (

) & that's what the circuit is for, but it is 12v constant.
I mounted the converter to the left of the square hole where the FWD switch harness end stuck out. I used the ground wire on the harness for both circuits.
The harness seems pretty secure where it is so I covered the end & tucked it back in the hole just a little. 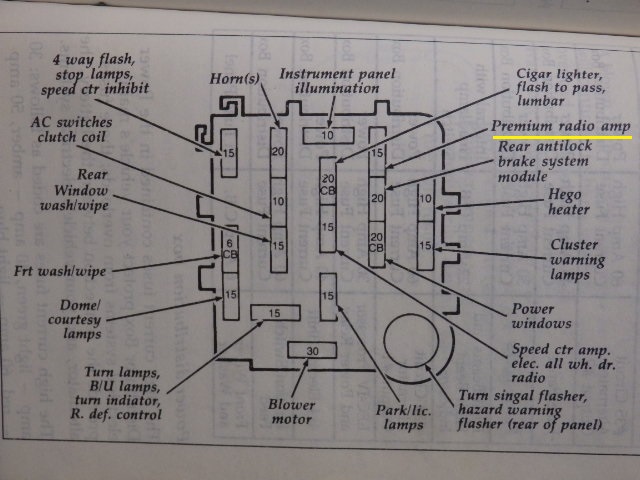 This is about how the clock looks illuminated with 2 LEDs (In the photo only 1 lit LED @ 12 o'clock. My lousy phone camera lets in too much light). 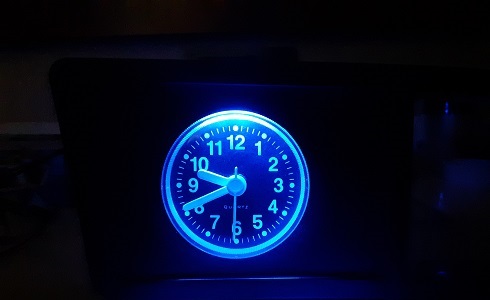 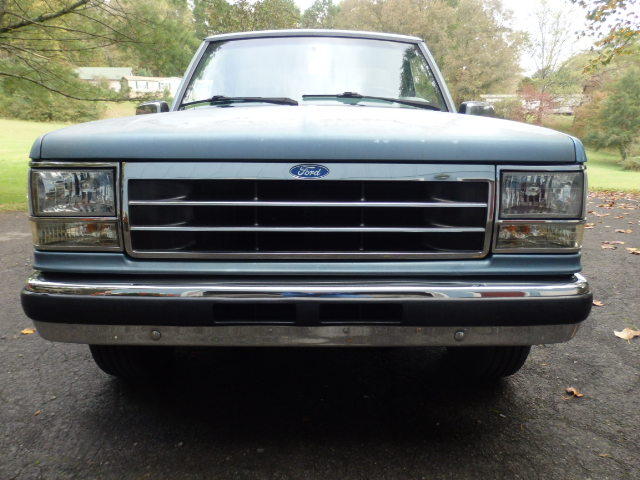 Well I didn't even realize it until yesterday, but the Rough Country lift poked a hole in my front diff.