Sound way better then the original 25w ones.

Since I now have an unexpected day off tomorrow, I’ll get the power line noise filter installed on the 2011. Apparently fuel pump radio frequency interference is a thing with many Ford vehicles. I have to turn the squelch up way more than I should have to as a result. Installing a noise filter on the power line for the CB didn’t help like I had hoped it would.

CrabGuy said:
Not a damn thing, but the beer was cold

I'm pretty certain I would melt at 111 degrees

Dirtman said:
I bought a clay bar kit once. I got about 1/4 of my truck done before throwing the whole kit in the trash, getting drunk and never speaking of it again...

No shiney paint is worth that much work...
Click to expand...

CrabGuy said:
Not a damn thing, but the beer was cold

You're doing the Or/Ca split wrong...

My daughter and I painted her baby car seat. she wanted to draw a Pluto on it, and I found her a simple tutorial https://artistro.com/blogs/news/meet-pluto-drawing-a-dog-with-artistro, that was kind of fun and the drawing turned out cute. We've painted with acrylic, so I hope the paint is durable enough

Yeah I know. I can't leave until Tuesday though. It's always a great change in climate on the Oregon coast. It will be my first long trip in the Ranger.

mtnrgr said:
My ranger beside my friend's 66 Fairlane 500, hopefully get it done some day.
Click to expand...

How are things going for you? All "good"?

Got the RF filter for the fuel pump installed and the drive shaft and fuel tank are reinstalled. The pump runs and lets me drive the truck, so first hurdle cleared. I drive out to a Wilderness First Aid and Communications training weekend tomorrow. So, we'll see if the filter works or if I wasted half a day for nothing.

So I guess I’m overdue for a big update…

haven’t really been online much the last couple weeks. Work picked up so I was doing 8-10 hour days, then putting in another 6-10 hours every night between side work and things that were broke. Still way, way, way behind.

red Ranger blew up on the highway. Was headed out to the gf’s after work (to do an oil change in her car and work on tractors. Suddenly I had no oil pressure and bam. Tried to get my insurance to tow it but almost two hours later I was still there. Had my buddy bring the tow dolly behind my f-150 to rescue it. Green Ranger is still in pieces m so I have been driving the 150. Of course, the body is to the point that the drivers door is pinched, so I have to climb in the passenger side. My hip is taking a beating from driving that beast daily.

Which leads us to the steering feeling really sloppy and the vibrations getting really bad. Found a crack behind the steering box, so I pulled the box and patched it. Took a big chunk of plate, a little welding, and a lot of torch heat and beating with a hammer to get it done. Then I did wheel bearings and put a new brake hose on. Old one crumbled the fitting when I touched it. Felt a lot better so I decided to take back roads from work out to the gf’s to try and get a tractor fixed for her (hers is down and I patched together my old one, took it out there, mowed just over half the yard and it ate a deck belt. Put a new one on and it promptly ate that.) got almost there and got a wicked vibration. Babied it there, got under, yanked on everything in the front end to no avail. Moved back to find the driveshaft rattling bad. Yup, it ate another u-joint. Fortunately, for working on the tractor, I threw my impact bag in the truck with a couple odds and ends. Which means I had the impact, sockets and hammer needed to make it work, so a trip to the parts store in her car and a bunch of hammering and the new joint was in. Made a couple adjustments to the mower deck, lubed some stuff, and swapped bearings in a spindle, so hopefully the mower is serviceable now.

Tomorrow I’m working on a Ranger. Probably my green one because I need parts for the red one. Really need to get one of those two back on the road right away. I’m open to help or parts or both if anyone is available. I don’t see either getting together this weekend, so there’s always another day if someone can help. Know we are all busy with stuff so I would be willing to return the favor as soon as I can get a Ranger back up.

Did I ever mention that I love craigslist?

They’re just about finished doing the road out front, so I’ve been looking for stuff for landscaping and to install some lighting, etc. I found a bunch of bargains, and I use the 97 Red Ranger to get most of them to save on gas.

But when I’m on craigslist, I can’t help but look for aluminum angle, steel angle, etc. if I can buy it cheap, because there’s always another project coming. Ditto with the Ranger parts now that I have the fever.

I literally have about eight or 10 of the diamond plate toolboxes, but I don’t have one that is actually the size for the Ranger. So, feeding my addiction, I looked and a guy had a good one for $50. So I emailed him and I said I’m a senior blah blah blah would you take $30, and he said yeah. It’s one of the narrower boxes (front if truck to back) which I like with the short bed.

I don’t know if I should feel good or I should be insulted, but when I went over there, very nice younger guy in a nice house, the guy gave me the tool box but wouldn’t take my $30. I wanted a little discount, but not because he thought I looked totally pathetic when I was in front of him!! Anyway, it’s locked and he didn’t have the key, but I can work that out pretty easy.

It reminds me of about 20 years ago, I went to the movies with number two, and the gal automatically gave us the senior discount. I was happy because I saved six dollars, and my wife was totally pissed off! 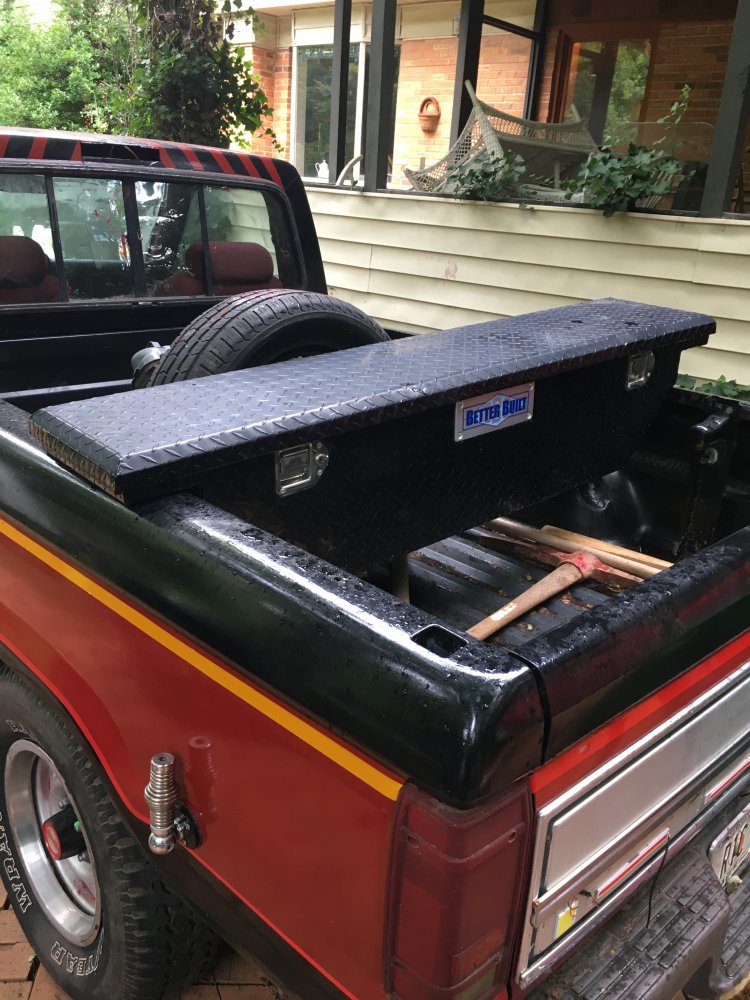 How are things going for you? All "good"?
Click to expand...

Doing ok, wouldn't say I am good...I am surviving as I can each day.

mtnrgr said:
Doing ok, wouldn't say I am good...I am surviving as I can each day.
Click to expand...