Drove the 87 4wd all over the place, the more I drove it, the better it ran.

I jacked up the ribs in the aluminum cap (don’t need a bird pond), took off the cap and started stripping & sanding. Really only two bad spots, both very manageable. 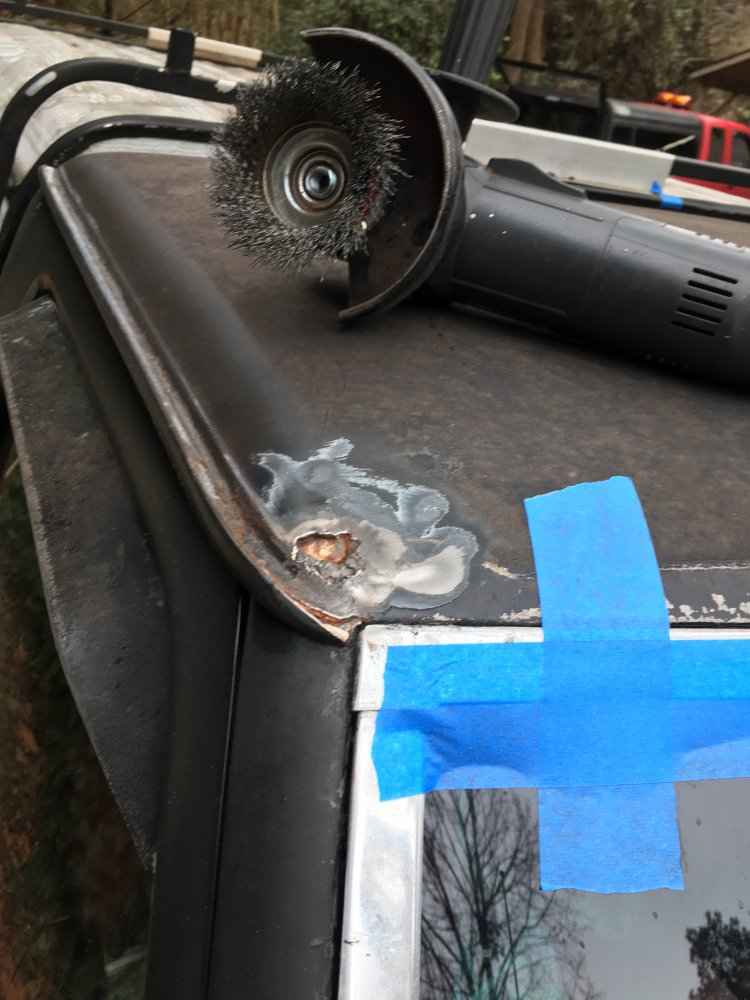 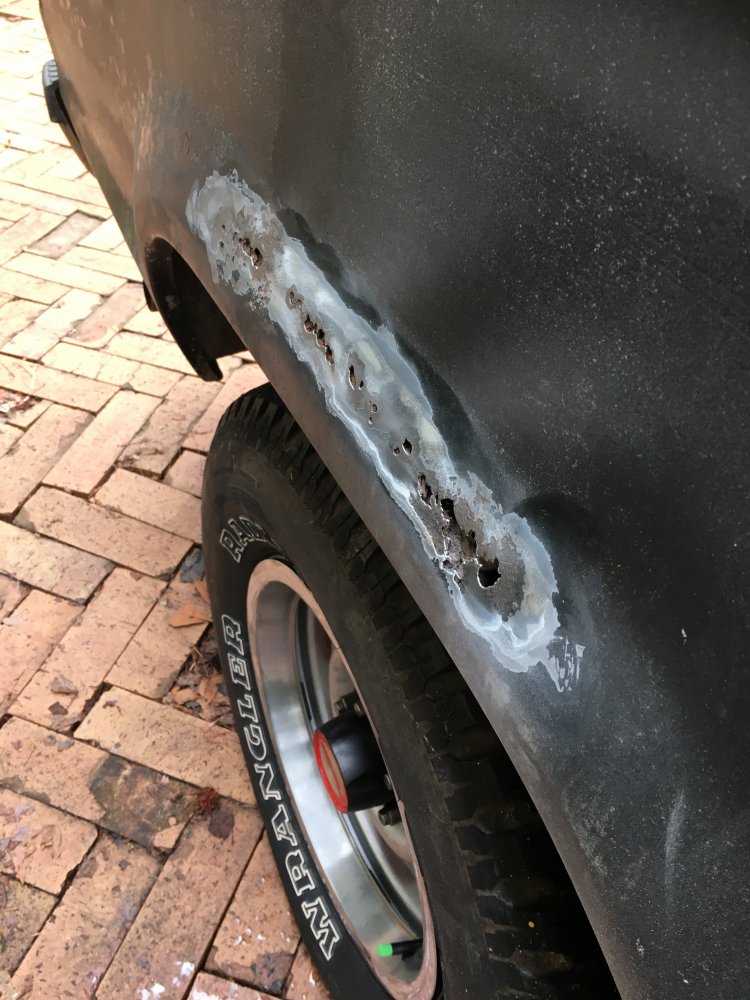 I’ve learned you get the best result by using the right precision tool...

On the two rust holes (only rust holes), after I brushed them out and blew them out with air, I mixed up a very thin urethane and then squirted it all around in the holes. I used 2 parts thinner to 1 part polyurethane. I squirted it in with a 3ml syringe (no needle). It’s thin and soaks spreads everywhere, hopefully slows down the rust. 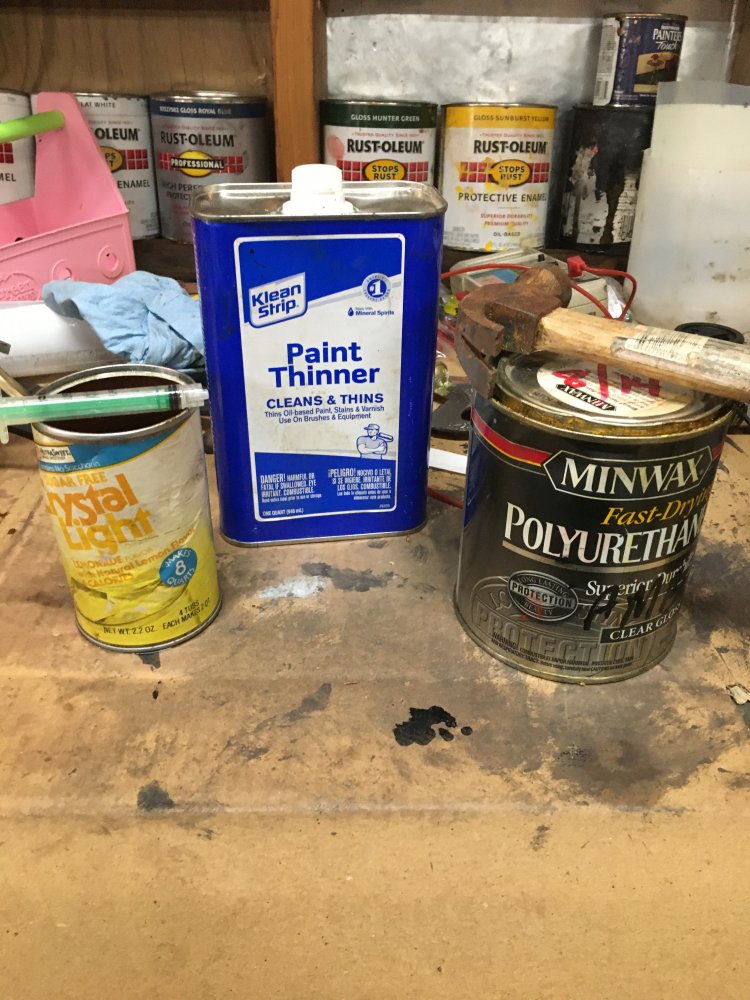 I was happy to finally use my Crystal Light container. I’ve only had it 30-40 years.

I got it 90% stripped and 90% sanded, got bondo over all the small stuff. In the fender, I mixed the bondo into some steel wool, & packed the holes, and slathered it over the top. We don’t have the same issue with rust here in Hotlanta, and it’ll be under a carport. Definitely will outlast me! 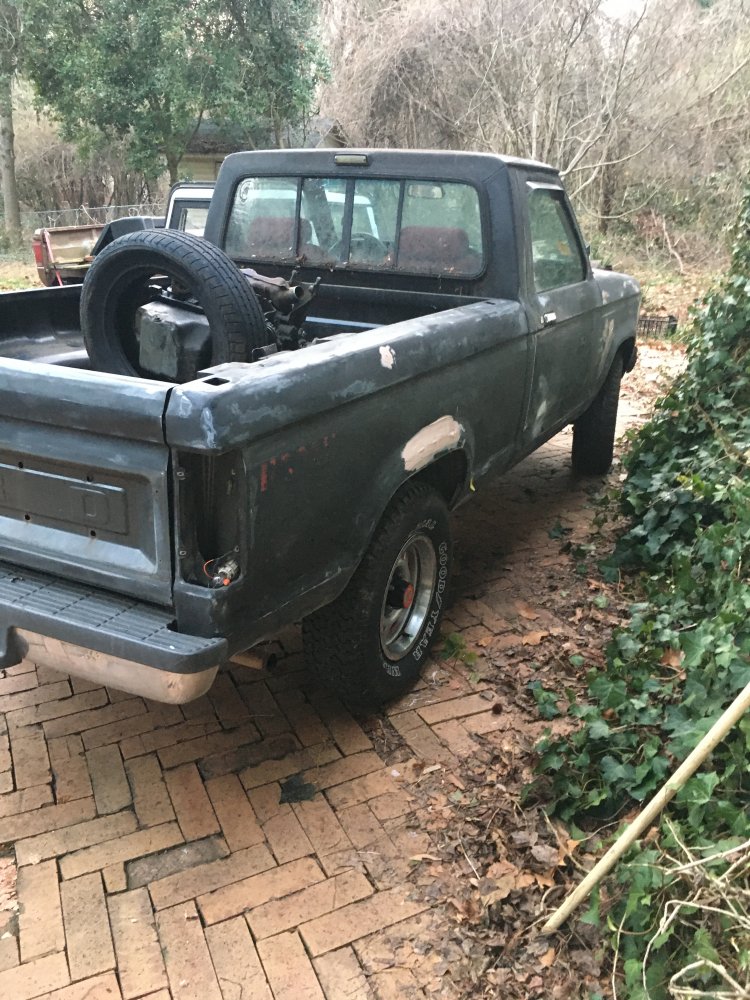 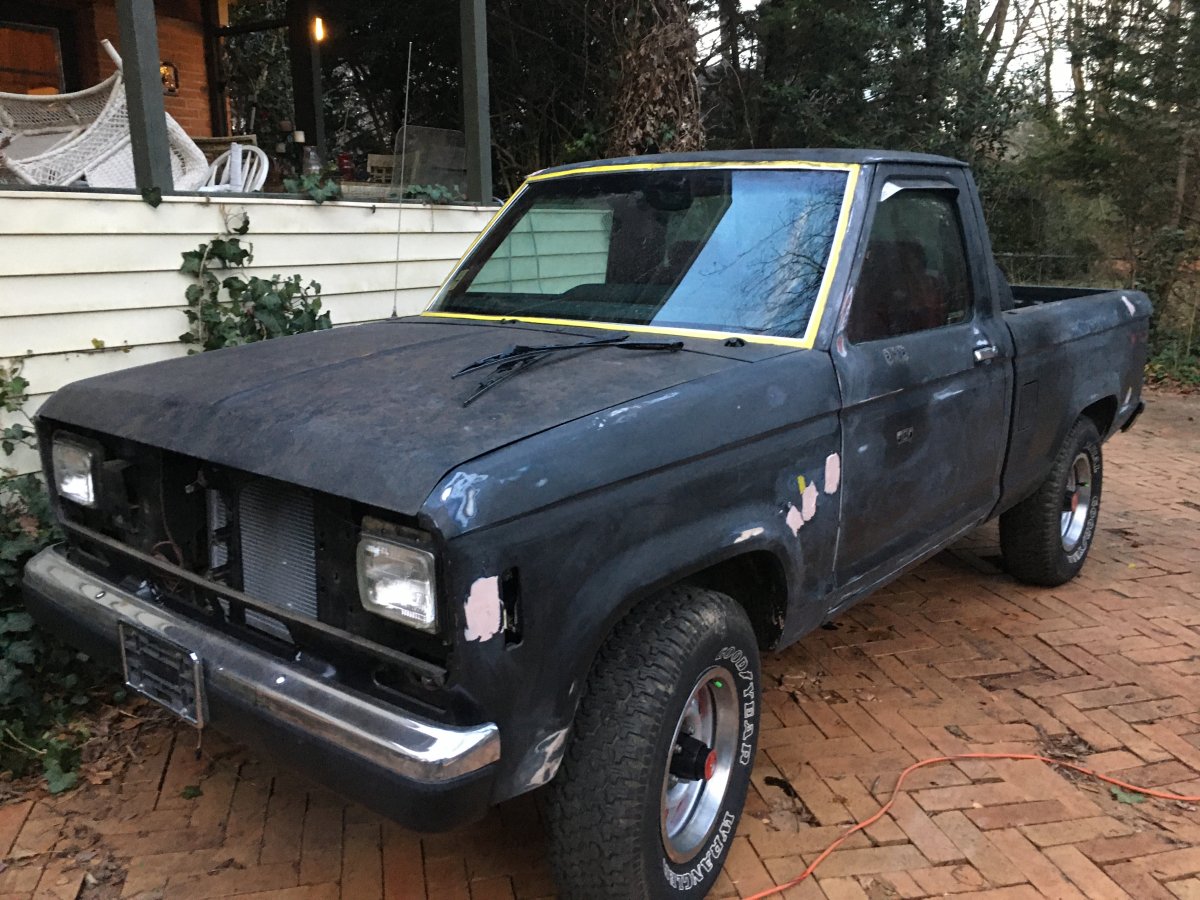 I was hoping to get a primer coat on it, but ran out of energy. It’ll have a coat or two on tomorrow. & I also need to strip the paperweight now that the cap is off. 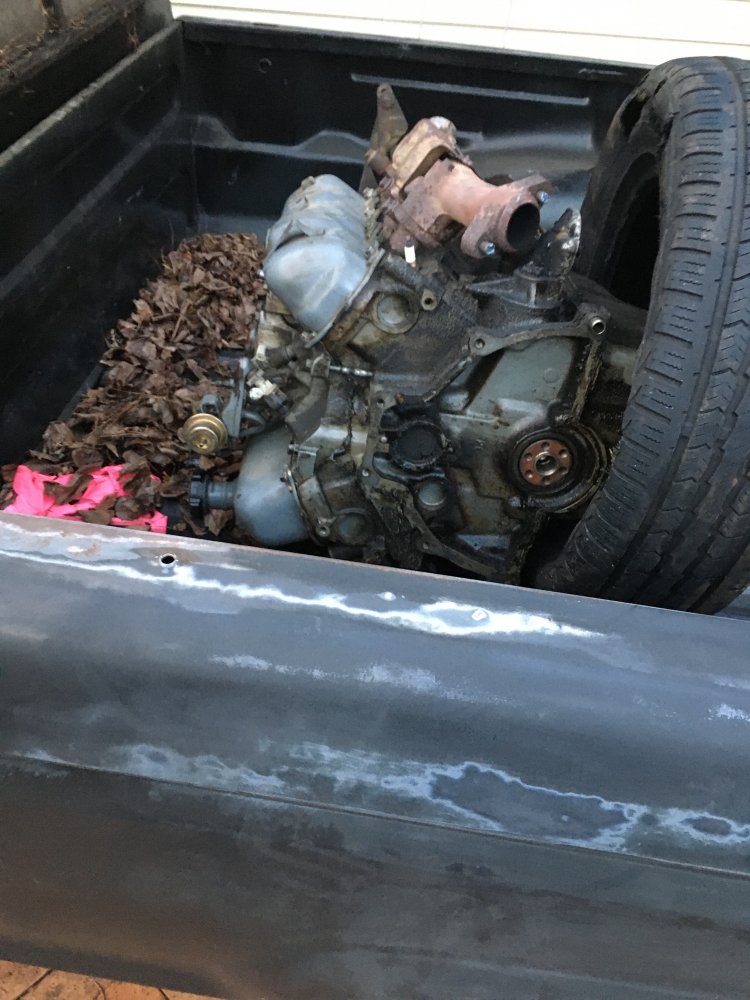 I used the tailgate of the red Ranger as a workbench for a little bit today. That was about it

Oasis Express Wash on W. Tennessee St. (US 90) in Tallahassee, Fla. Attendants took photos, wrote some stuff down and gave me their boss's phone number. Asked me to come back Monday. Was about 5:30 PM and they said the manager had gone home and he was the only one with access to the cameras. We shall see. Worst case I have comp and collision, and a lawyer who will be glad to subpoena their camera footage.

I saw the guys over at TFL classics fix a dent like that by pushing ab under inflated basketball behind the dent and re-inflated it, popping out the dent.

Reinstalled my transfer case after fixing 4H that was slipping out of 4x4 when in a sandy wash. And it actually works! -Well at least the little test drive I did. I'll try sand and hills tomorrow.

Worked on it for a week. Ended up swapping the mode slider with one from a '93. The OEM mode slider was engaging only 1/8" of the 1/4" wide spline, and since it's spring-loaded, allowed it to slip out with a Bang. 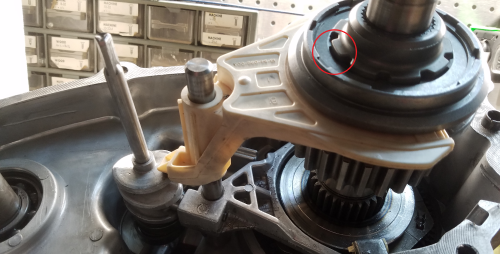 Oh, and before I paint, a question: everything is now pretty much OEM except the a/c compressor and a few other under-the-hood parts are missing. Gotta have A/C in Hotlanta. I’m trying to go cheap. Do you think I should get the junkyard parts and refurbish them? Or should I go with this aftermarket version. I’d have to get an opening front window for my $100 cap too. 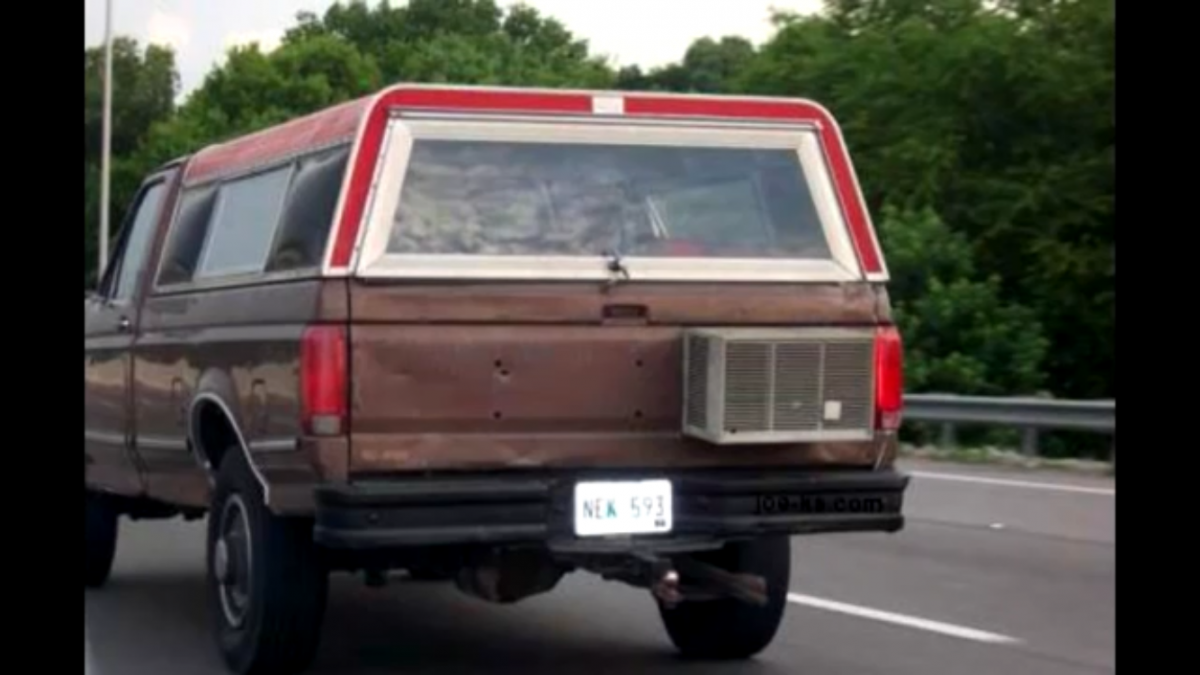 Drove mine all week to work, friday I washed it and filled it with gas, replaced thermostat in the car so the ranger can sit a bit, have parts to put on but want it to be warmer out than it has been. Have a new starter, solenoid, battery cables. Its had a slower than normal cranking speed for the past few months and the battery is 6 months old. 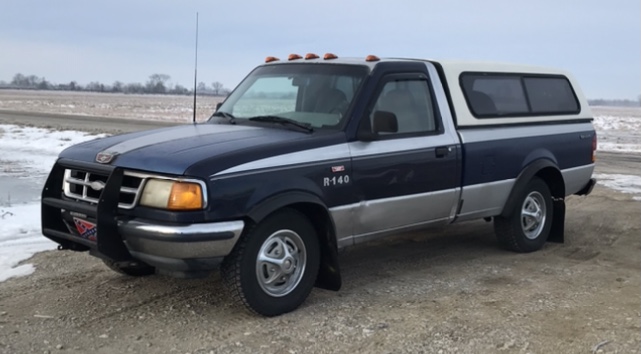 racsan said:
Drove mine all week to work, friday I washed it and filled it with gas, replaced thermostat in the car so the ranger can sit a bit, have parts to put on but want it to be warmer out than it has been. Have a new starter, solenoid, battery cables. Its had a slower than normal cranking speed for the past few months and the battery is 6 months old.
View attachment 56284
Click to expand...

well Id rather do it now before it’s completely gone, sure it could be a cable or solenoid issue too so Im just renewing it all, after 20+ years and 160,000 miles it cant hurt. Im sure everything on mine is original.

sgtsandman said:
Works great in the winter. Warm weather months, they get washed in the driveway. Depending on how you look at it, car washes are more environmentally friendly. They recycle the water into a nice salt brine over time.
Click to expand...

I have two rain barrels with a balance hose and an electric pump I use when it's not winter. Come over sometime after I set it up this year and check it out.

Roert42 said:
In Germany you are not aloes to was your car in your driveway, against her law. You must go to a car wash so any dirt or oil or whatever doesn’t end up in tree ground.
Click to expand...

That doesn't surprise me.

Drove it to town for the first time in almost three months. Drove gravel to avoid salt... Kind of an interesting journey. 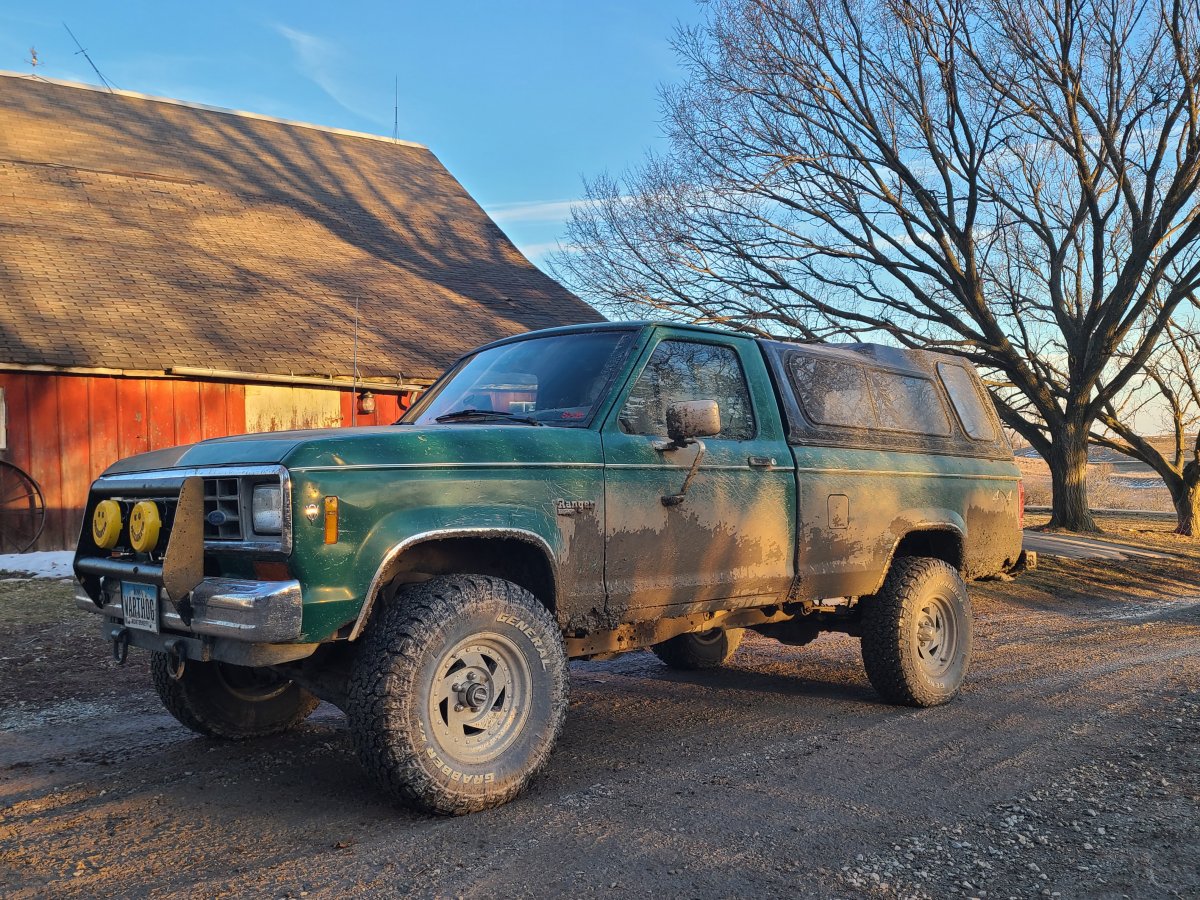 Got gas on the way home from work last night in the '97, the attendants (I'm in Oregon...) got all freaked out when it was leaking gas again... the stupid filler neck is very bad... I ordered one a few months ago but patched it with some of that tape that seals to itself when stretched, that only lasted so long and apparently isn't gas proof...

Pulled the bed today to change it finally only to realize the hose I got was 2" too short (before I installed, but after opening package, must be for step side bed) so I improvised again... This time I used PVC Pipe Wrap tape since I don't remember where I put the tape I used last time... Hopefully that will last long enough for a new hose to be ordered. It's annoying that the hose on my '90 is from 1989 and perfectly fine with close to 300k miles on it, but the '97 is completely fried at 160k

I took a couple pictures to make you rust belt guys jealous, but I don't feel like getting them off the phone at the moment...

scotts90ranger said:
Got gas on the way home from work last night in the '97, the attendants (I'm in Oregon...) got all freaked out when it was leaking gas again... the stupid filler neck is very bad... I ordered one a few months ago but patched it with some of that tape that seals to itself when stretched, that only lasted so long and apparently isn't gas proof...
Click to expand...

Could be how the road salt hits it. A few years ago I bought my late uncle's Mercury Marquis from the estate (I was the executor, had to buy the car so I could fix it up to sell it, long story), it hadn't run in a year and a half since we took his keys away, and when I put gas in it leaked all over. Filler tube was rusted out, the part was discontinued by Ford but I found repro units on Amazon.

It's not that, this is probably the cleanest frame most of you have seen . That surface rust on the crossmember was surprising, I might spray it down next time I have the bed off... The metal is in good shape, they changed materials on the filler tubes, I think it's just a thing, when it first started happening I looked into it and it sounds common... I know the Jeep wheels in back look odd, there's Ranger steelies in front... I need to get the stripes off the door too... 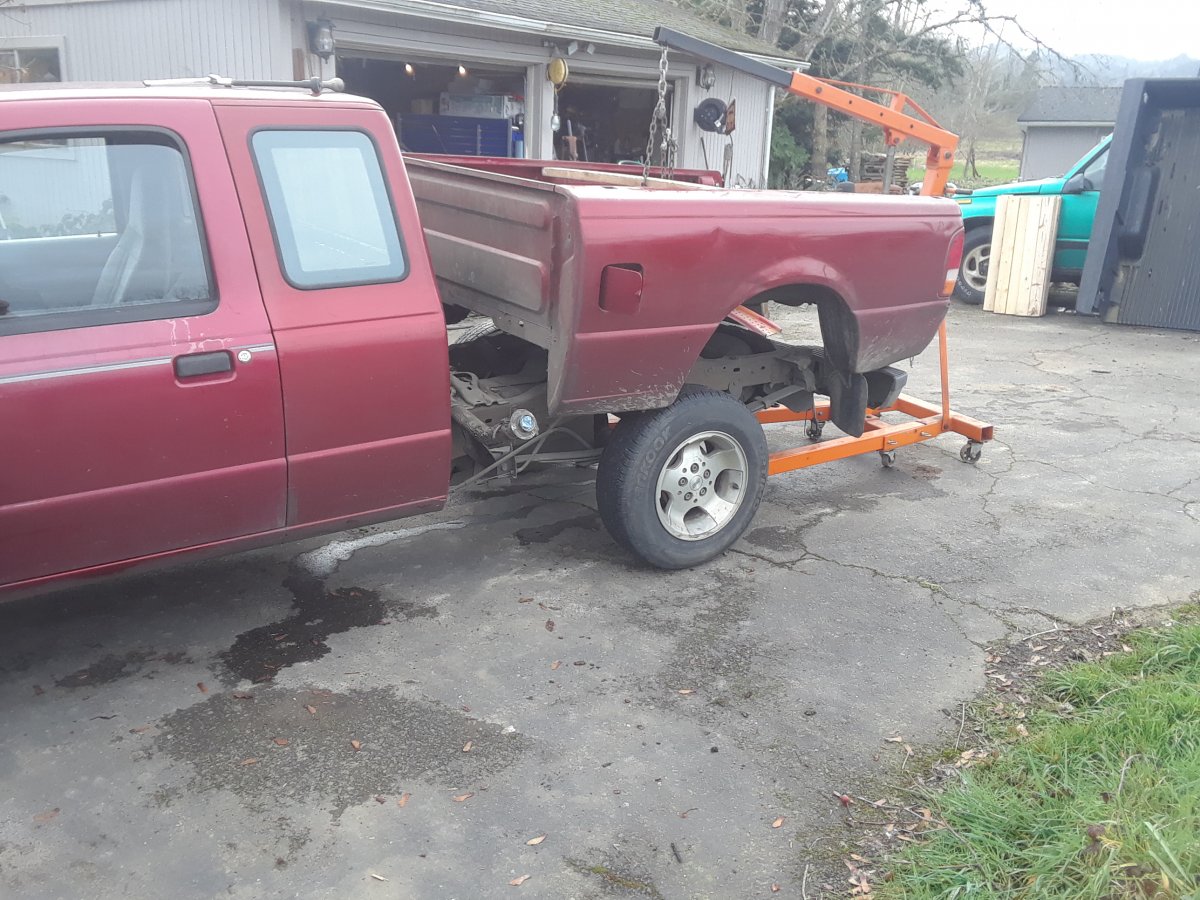 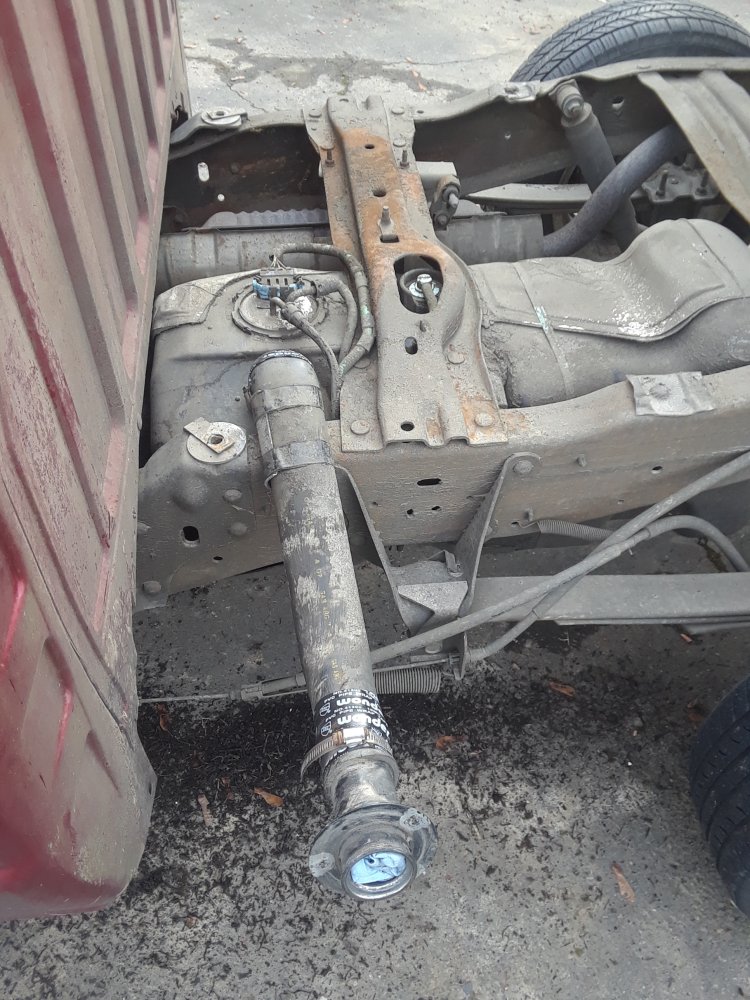 Just a side note. It looks like you’re using a NAPA/WalMart type paper shop towel to plug the fill tube for safety. A long time ago, in a galaxy far far away, I used to do that until: a piece of the towel about the size of a dime tore off and eventually slipped into the fuel outlet (1966 Ford F600 with the tank behind the seat, no in-tank screen). The truck would start & run around for maybe 1/10th mile, and then sputter and lose power, but not cut off, and if you let it sit and idle, then it would start running right again, but only for a bit. The bit of paper was still allowing fuel to go past, so the carburetor bowl would fill up and it worked OK at a low speed. When you stepped on the gas, it would go right just until you drained the bowl and then it was working off the trickle from the gas tank. Three of us spent 24 hours on the side of the road out of town taking half the truck apart before we found that little bit of towel, from a towel that I had used maybe two weeks before that.

Point is, use a rag or the gas cap, check it going in & coming out!!