First, thanks to everyone for posting so much valuable information. I'm working on a buddy's truck (a cherry 2003 FX4 LII with 102k, manual gearbox + stick transfer case selector) and I've gleaned some pretty valuable information here. Awesome forum!

Anyways, he called and said his rear-end started making some pretty loud, rhythmic clunking sounds on his last mile home, which worsened when he took his foot off the gas. He noticed it was leaking a little fluid in the driveway after the trip.

I got over there and noticed that the rear diff was leaking fluid at the pinion seal and that there was a quarter-inch of play between the yoke and the diff. Uh oh. I prepped him for the worst. Fully expecting catastrophe inside the diff, I pulled everything apart to find that the pinion nut had walked itself off so much that I spun it off the last six revolutions by hand. I pulled the shafts and carrier and was able to extract the entire pinion by hand!

So, the noise he was experiencing was the pinion grinding against the carrier. The carrier looks worse than it is and the end of the pinion is a little banged up, but the teeth look great on both. My plan is to replace the pinion bearings/races, seal, crush sleeve, and nut, and then the axle and carrier bearings because we're in there. Leading to me to a couple questions for you Torsen pros:

1. Am I crazy to re-use the carrier, and the 4.10 ring and pinion? I'm going to de-burr the ends of the pinion to clean them up, but it seems like the slight damage is beyond where the properly shimmed ring will contact the pinion gear.

2. The outer pinion bearing goes on and off by hand. I'm used to pressing them on. Is this normal? Like, does the nut torque/crush sleeve hold the outer bearing in place?

3. What fluid does this Torsen like? I've read that Ford revised the original spec on the data tag. Do you guys use friction modifier?

Thanks so much in advance! I appreciate you folks! 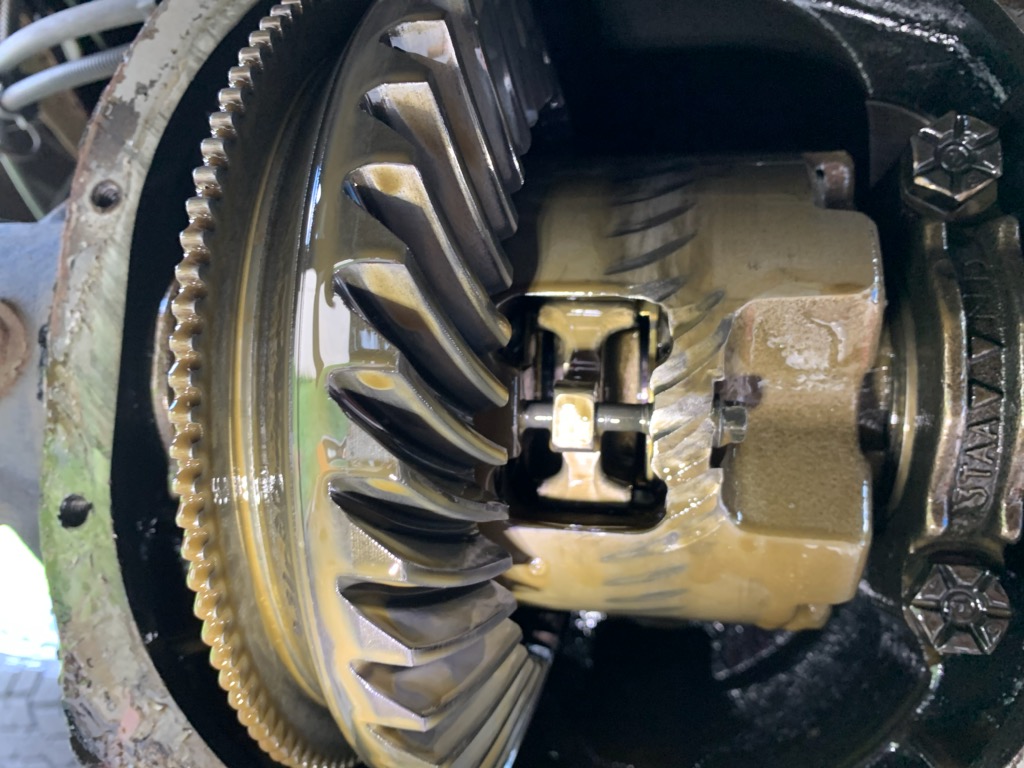 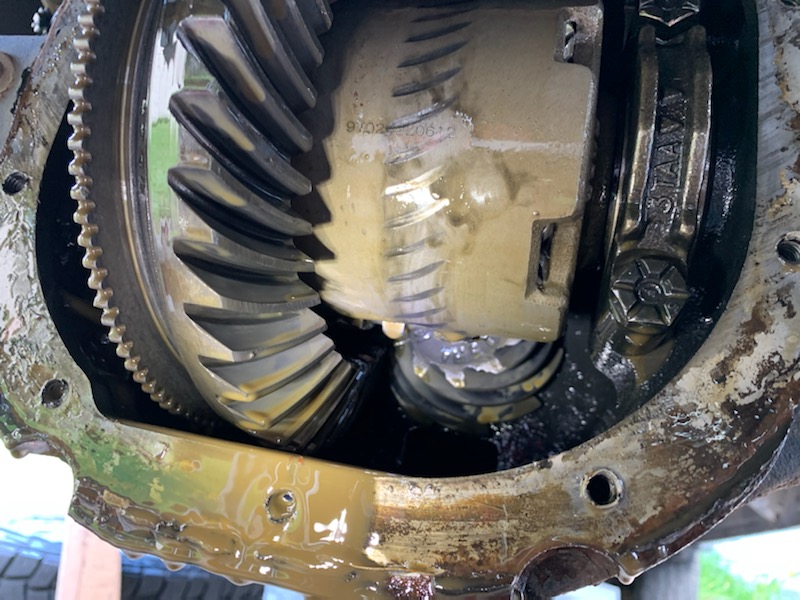 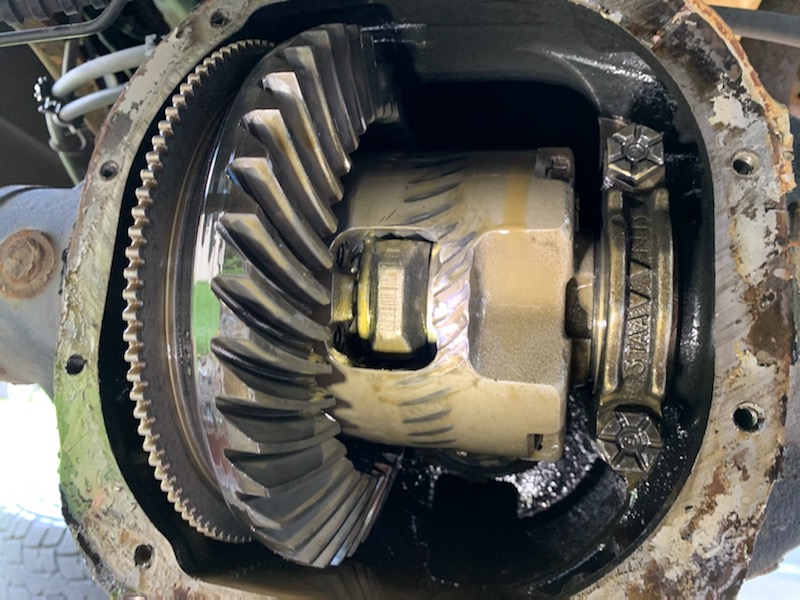 oh you have a torsen.


Dont mind me. I'm just jealous. I'm sure someone will be along that can actually assist.


Also, differentials are klingon to me.

The nut and crush sleeve position and hold the outer bearing. It shouldn't have play, though. A good precise fit.

The Thorsen is a gear train type of ls differential. Doesn't have friction discs that I'm aware of. So I would think friction modifiers are optional. Many gear oils have it mixed in anyway. Use what the owners manual recommends.

Judging by what I see in the photos, I'd clean it up and run it. A brand new pinion nut might not be a bad idea, or at least clean the threads with brake cleaner and apply Loctite when you put it back together.

Thanks Eric! Very much obliged for the second look. And thank you for serving, brother. I appreciate you.

I'm definitely going to replace the nut/crush with new. I'll update the post with our results in case anybody else runs into this.

I agree with eric. Install a new pinion nut and take it for a test run. Those marks on the carrier are just surface scuffs, no? If they are, pinion nut and give her a test.

where did the metal go from all those nice gouges?
if it were mine a very thorough cleaning of the entire axle would be in order.

If you're gonna play in Texas, you better have a fiddle in the band.

Those are definitely more than "scuffs". "Gouges" seems almost right, maybe a little heavy-handed. My primary concern was the weight of the diff being off-balance, but it is uniformly distributed around the circumference of the carrier, and the same with the pinion, so my instinct is that it's going to be ok. Only time will tell.

There's surprisingly little metal in the bottom of the diff. But it doesn't appear there's a lot of metal missing from the carrier or the pinion. That does make me nervous, so we're going to clean the s*** out of it and flush everything (especially the axles tubes) with a bunch of gear oil.

Make sure to wash out the axle tubes thoroughly, any residual metal particles will ruin the new bearings. I'd also replace the carrier bearings and wheel bearings because they've been run in the metallic fluid and the the differential apart to clean it out. It might be worth dressing the ends of the pinion teeth with a file if they have any signs of wear. A pinion nut should never loosen, if it's not a new one it's supposed to be installed with locktite. I've reused a lot of them and locktite has held them in place. If the gears make some noise you'll probably get away with it in a truck.

I've ran worse. Maybe a new nut and crush washer. It may not have crushed last time. I usually give em a lil head start w/ a hammer before crushing them in. Maybe swap out the fluid again after running it a bit, if it does so.

I'd probably reuse them too, clean the whole deal out really well, new bearings throughout, and you will need a new crush sleeve.

As far as fluid - no friction modifier necessary, that's only needed for clutch based limited slips. A quality gear lube by itself will be just fine.

Eddo Rogue said:
I've ran worse. Maybe a new nut and crush washer. It may not have crushed last time. I usually give em a lil head start w/ a hammer before crushing them in. Maybe swap out the fluid again after running it a bit, if it does so.
Click to expand...

I hope you are kidding about using a hammer to give it a head start. That crush while torqueing is important to help get the proper bearing load.

If that outer pinion bearing feels too loose, you can use a cylindrical retaining compound to hold it. It is kind of like a Loctite for shafts and bearings. Just don't put too much on or it will get everywhere and you certainly don't want it in the races. Most industrial gear and sprocket supply suppliers should carry it.

gw33gp said:
If that outer pinion bearing feels too loose, you can use a cylindrical retaining compound to hold it.
Click to expand...

That would be the green Loctite

Thanks everybody. I really appreciate the advice. The tag calls for 90w-140, so I'll use synthetic Valvoline.

My guess on the nut is that somebody had this apart in the past, reused the bolt and crush, and didn't loctite the bolt down. I can't imagine another scenario where that bolt walks off. I mean, that's a lot of torque.

I'm ordering parts so it'll be a few days, but I'll let you know how we make out...

ericbphoto said:
That would be the green Loctite
Click to expand...