The newest addition to my vehicle-fleet and first ever Ford truck.
I was gonna say first Ford ever, but realised that I actually had a 70s something old Granada Stationwagon back in the early nineties. (Long story short, it got broken into several times before i gave up and scrapped it.)

Anyhow, I drove this very truck for the first time 4-5 years ago and instantly fell in love with it. I went on to own a Chevvy S-10 instead of a Ranger for a few years, maily because the older Rangers are very hard to come by over here, and really liked that truck alot. I sold my Jeep XJ the other week, and planned on buying a fullsize-truck when I remember seeing this truck being for sale earlier this spring. Sent a message to my buddy who owned it, and it was still for sale.
Bought it right then and there over bookface messenger.

I will use the truck as my "go buy some ice-cream and maybe haul some lumber"-ride during summers. I'll put her in storage over the winters and drive something else.

Virtually rust-free -89. Just a few blemishes here and there on the body and the passengerside floorpanel has surfacerust.
A 5*5cm hole in one of the doorsills is the only thing I will need to weld up later on.

There are some issues however, and being a buildthread I'll adress them as they get fixed and/or come up as I go along.

As you can clearly see, it has an intresting paintscheme. My guess is that they had it rattlecanpainted in orange, and then switched the bed at some point. It looked like this when my buddy bought it in -15 and he didn't bother repainting. I grabbed 6 cans of orange from Biltema (basically the Swedish equivalent of, I guess, Autozone) and plan on giving the rear a good blasting. I won't really do anything apart from a good wash and wipe with acetone before I spray it. If it holds until next year Im good. Oh, I will sandblast the small rustspots and prime them before painting the topcolor.

When I got it home, the first thing I did the following morning was to install a new cd-player and clean the interior. In this process I managed to put it in 4wd and drain the battery by listening to music. It pretty much ended with me pulling the shiftermotor in the transfercase and fix it up by replacing the nonexistant bushing with a piece of hose. I made a thread about it here: https://www.therangerstation.com/forums/index.php?threads/89-ranger-4wd-transfercase-transmission-issues.187827/

The tempsensor for the gaugecluster was shot so I replaced it. Since the airfilter hadn't been replaced in 4 years (even tho the truck has been serviced with plugs, oils and whatnot) I decided to pop in a new one. The old one was possibly the dirtiest filter I've seen on a road-driven car....

Yup, that's small pebbles in there...

The plans going forward is to replace all 4 wheels and put on some new rubber. I have 4 new Goodyear 245/75 R15C in the mail, and hopefully I will manage to prep the rims before they show up. It's not the ones that currently on the car, but somewhat nicer looking.

I have a intermittent problem with the generator/charging that needs to be adressed. It might be the battery thats shot or possibly the brushes. I have new brushes laying around so it's just a matter of getting the work done.

The clutch for the radiatorfan is bad, stuck in "ON" mode all the time. Will most likely replace it with an e-fan from a Volvo. We have a couple of those in this country.

There is no anti-freeze in the radiator. There is water tho. My buddy had a hose slip the other week and just filled her up to get home.
What can I put in her after a full flush of the system?

It really needs a thorough cleaning in the enginebay.

I need to rust-treat it underneath. Linseed-oil to the rescue. Maybe with a sanding and some paint on the passengerside floorboard beforehand.
Last edited: Jun 25, 2020

I didn't like the orange at first but it requires a whole lot less washing and waxing to look presentable than my black Mustang. There are almost none of the early body style Rangers left in New England, that's why I ended up with a 93. Please post pictures of you progress. 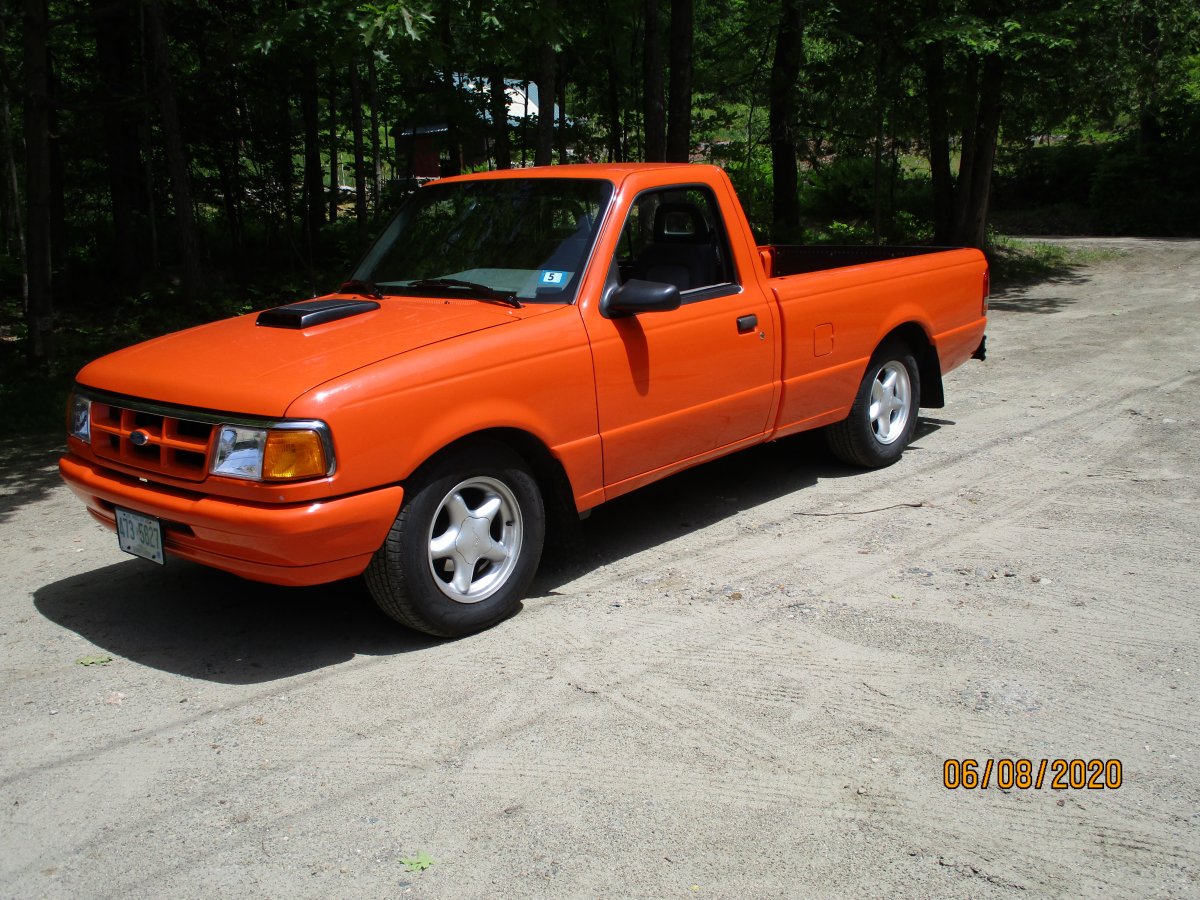 19Walt93 said:
I didn't like the orange at first but it requires a whole lot less washing and waxing to look presentable than my black Mustang. There are almost none of the early body style Rangers left in New England, that's why I ended up with a 93. Please post pictures of you progress.
View attachment 44457
Click to expand...

Should be "01" on the door, in thick black font outlined in white.

Is there a Swedish Orange too? I thought Netherland had the lock on Orange.

19Walt93 said:
I didn't like the orange at first but it requires a whole lot less washing and waxing to look presentable than my black Mustang. There are almost none of the early body style Rangers left in New England, that's why I ended up with a 93. Please post pictures of you progress.
Click to expand...

Will do. Like I mentioned above, it's gonna be a very basic rattlecan-job this time around. The one thing I've always disliked about this truck is the bi-color it's in now.
Hopefully we get a bit cooler weather next week so I can paint.
I was unsure on what to do really. Either go with orange on the tail end aswell. Or try to colormatch the blueish tint for the front. Or a complete repainting.
Going over the options, the cheapest and fastest at this point is to use the orange.

Looking at your truck, I think I have made the right decision. It actually looks better than I thought.
An amusing tidbit about Sweden is that our old state-owned telecom provider Televerket had all their equipment, cars, tractors and trucks painted in orange. All swedes born in the 70s and older instantly draw the paralell between all older orange cars to Televerket. So it's kinda fitting to have a "worktruck" in that color.

In that case I need to install a speedometer that uses yees/haw instad of km/h. Seems like a bit of a hassle.
On a slightly more serious note, Im looking into getting some checkerboard striping on it. Probably by using some kinda tape-product.