I found more questions than answers when researching how to install this kit and when I received it the instructions were pretty vague. The instructions illustrated the kit installed on a truck with no sway bar and said the frame brackets had to be relocated further toward the rear of the truck to clear it. I went a different route since I couldn't see a way to make that work without the stabilizers hitting against the drag link. Had I known I would post to the forum I would have planned out before and after photos along the way but I still think anyone looking to install this kit will find this information useful. I bought this kit after installing 2 inch spacers under my coil springs and had not yet made any other changes. 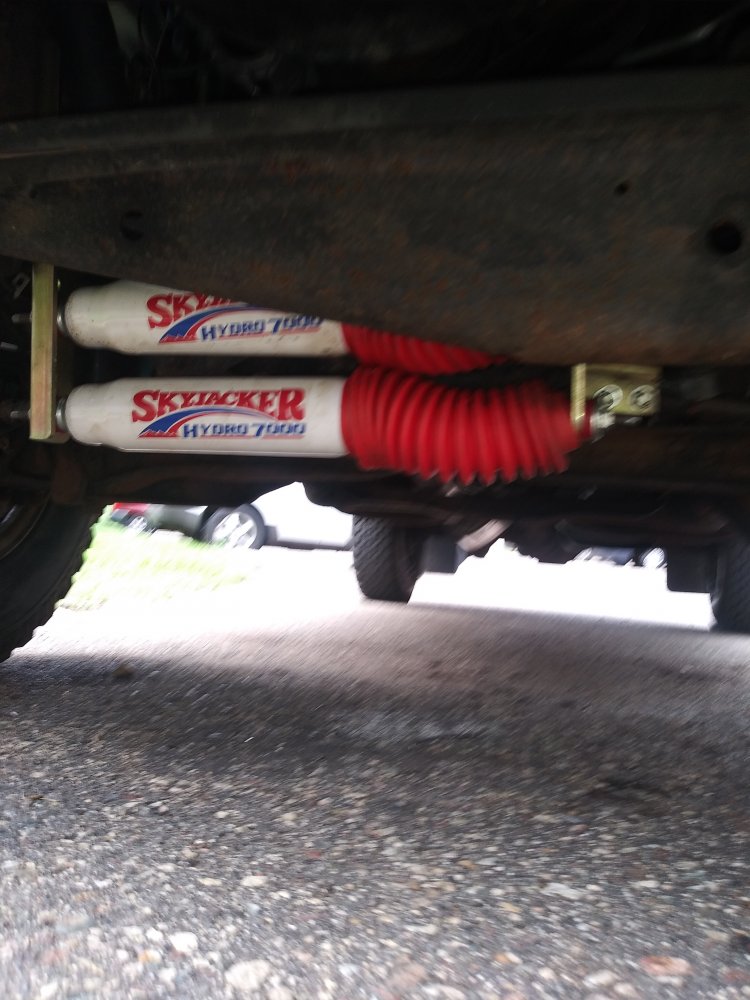 Heres an overall shot of the kit installed on my truck. the stabilizers are installed flipped 180 degrees from whats called for in the instructions because I found the larger end on the upper stabilizer would rub and bind against the sway bar. This problem turned into a non-issue later when I installed a pitman arm from a 4x4 explorer. 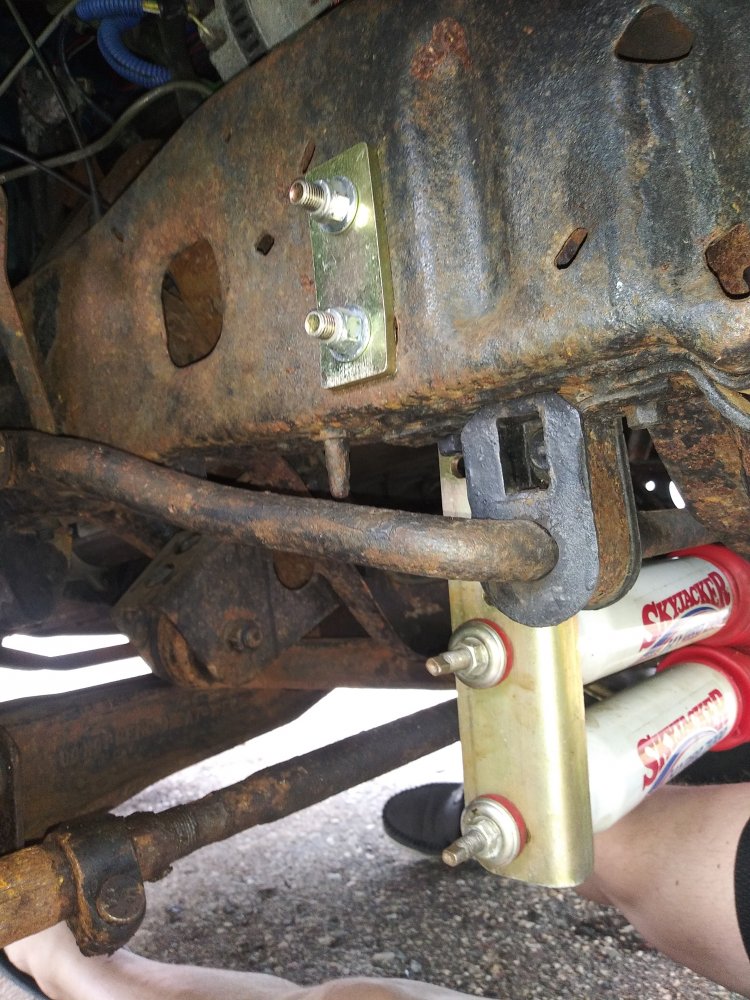 In this shot you can see the two brackets that bolt to either side of the frame rail. they are attached with two long bolts that go through the frame. The instructions say there are pre-existing holes in the frame. That was not the case on my truck at least. there are two oblong holes set at a diagonal on the outside of the frame rail. I lined up the small bracket on those holes and drilled through them to the other side. The instructions say to mount the brackets opposite of what you see here. the long bracket on the outside and the small bracket inside. The sway bar made that all but impossible no matter what I tried.

when installed with the steering centered and wheels straight there should be 4 inches of rod extended from the stabilizers according to the instructions. Swapping the large bracket to the inside of the frame solved my sway bar problem but also brought the bracket inward by the width of the frame rail (roughly 2 inches or so) so I had to make up for it on the end that mounts to the steering linkage to get my 4 inches of extension as required. 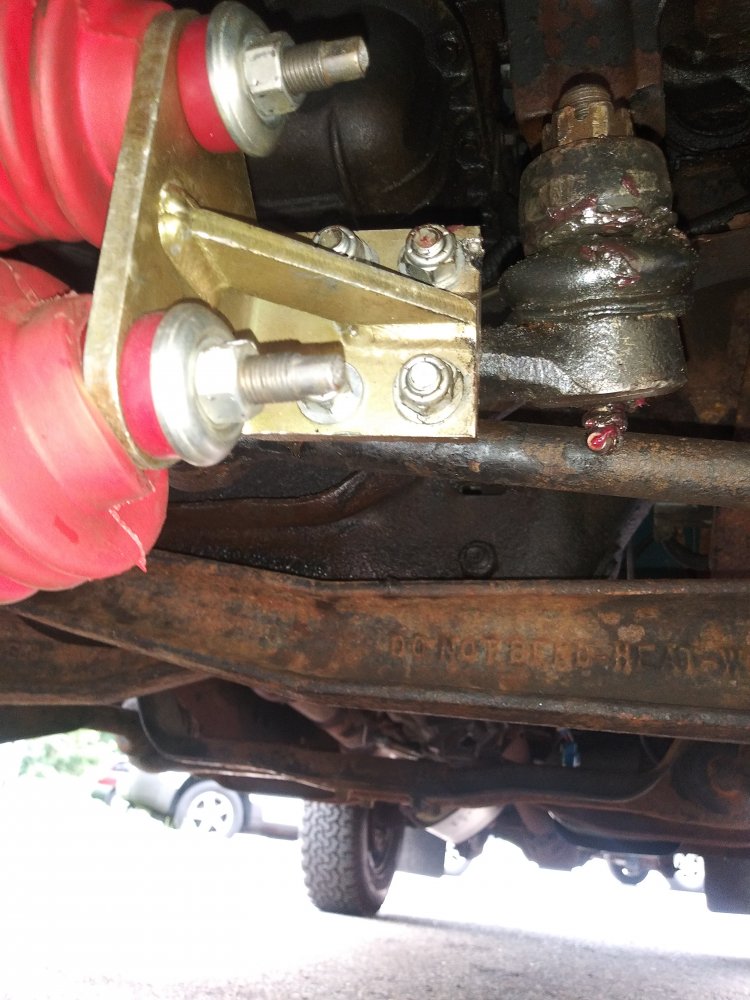 In this shot you see the bracket that mounts to the drag link. it was originally about 1.5 inches longer. I cut it down right at the tip of the welded reinforcement and installed it between the linkages for the tie rod and the pitman arm. I also flipped it horizontally to get my spacing dialed in to 4 inches. It will help if you widen the bolt holes on this bracket by a tiny bit. the u bolts used to attach this bracket get spread out a bit when you put them onto the drag link and it makes it a fight to get them into the bracket otherwise. If I had known beforehand what challenges I would run into and how to solve them, this install would have taken no time at all. like 45 minutes if that. I hope this helps someone out there and saves them some time and headache!

Whats it say on the i beam?

not to bend heat or weld on it. its stamped into it from the factory from what I can tell

You got me! I chiseled it out with an air hammer!

Yeah I hadn't done my homework. I got the kit thinking it would help resolve the bump steer I was having which was magnified by the coil spacers. In Hind sight I would have replaced the ball joints and steering linkages along with a new pitman arm and camber bushings. I swapped in a pitman arm from a 1st gen 4x4 explorer. a lot of grunting and pounding on a pickle fork at the junk yard but only 6 dollars for it and it yielded the best results of all that Ive done to this point. About a two inch drop from my original which was basically flat. I also installed 2.75 adjustable camber bushings and my alignment is probably better now than before I put in the coil spacers. I would love to do more but from what I can tell, lifts can get mighty spendy so Im cool with my little leveling spacers for now. I would sell the stabilizer kit in a heart beat in favor of a set of bilsteins in hind sight!
You must log in or register to reply here.
Share:
Facebook Twitter Reddit Pinterest Tumblr WhatsApp Email Link