4x4junkie said:
That is a bent axle shaft for sure (a warped rotor normally wouldn't have the wheel & tire also wobbling).
I don't know how long you've had the axle, but I'd suggest check with where you got it and see if they'll give you another shaft & caliper (and also a rotor too if needed).


This is one of those things anyone buying a junkyard axle should always check for. With the number of vehicles that get decommissioned & parted out due to collisions, unseen (or concealed) damage like this is quite common.

Case in point:
When I bought the '99 Explorer axle for my BII, I originally went into a local yard looking at a nice low price on a 3.27-geared unit with an open diff (plan was for 5.13:1 gears + ARB locker). They brought the axle out, set it on my tailgate, and I looked it over, rotating all the components. BOTH sides had a wobble exactly like yours (it was obvious that it must've been involved in a pretty good collision). They took the axle back into their yard and then produced a 3.73 geared unit with a Traction-Lok diff for the same price. I looked it over, all seemed good, which is the axle I've now had under there for over 15 years.


As for how you had vibes before, and nothing seemed to change much, remember you had those bubbled-out tires before too. So this is exactly what I said earlier, you had multiple issues causing the same symptoms. As you nail each one down, you should eventually get to the bottom of it all and finally have your truck riding smooth.
Click to expand...

Well, I pulled the axle out of the truck it came out of myself at a local junkyard that is now closed. The guy who owned the yard was going to be selling the lot soon and the yard was going to be turned into a solar field or whatever. So their prices were cheap, and I found the axle under an 03 Explorer Sport Trac. I don't recall the truck looking like it had been in an accident meaning that was the reason for it being there. I just assumed it was there due to timing chain failures or something (since it was a 4.0 SOHC) because it was all in tact and wasn't in bad shape. But anyway as I said I pulled it myself and didn't check because I wouldn't have thought to check that at the time, and the place is no longer unfortunately. (I really wish I had taken more stuff from there before they shut down, they were one of few places around here that still had a lot of 90s rangers). So live and learn I guess, definitely have to be more thorough with my checks of JY parts.

That is a good point, you're probably right that I've got multiple issues going on, and at least thankfully there are a lot of things that I can rule out at this point. I will be curious how the truck drives after fixing this axle. Just gotta go get a spare one (or two) from another JY and make sure to check it thoroughly this time!

Yep that axle shaft was definitely bent. It was hard to picture, but you can clearly see it in this picture. The one in front is the old shaft, the rear one is the one I pulled from a JY truck the other day. Notice how the front one clearly bows to the right. Anyway, long story short I replaced the shaft, the bearing and seal on that side as well as that caliper. The truck drives better, it's noticeably less shaky at all speeds. There is still the mysterious 40-45 shake, although it is much more tolerable now. All other speeds are pretty darn smooth. 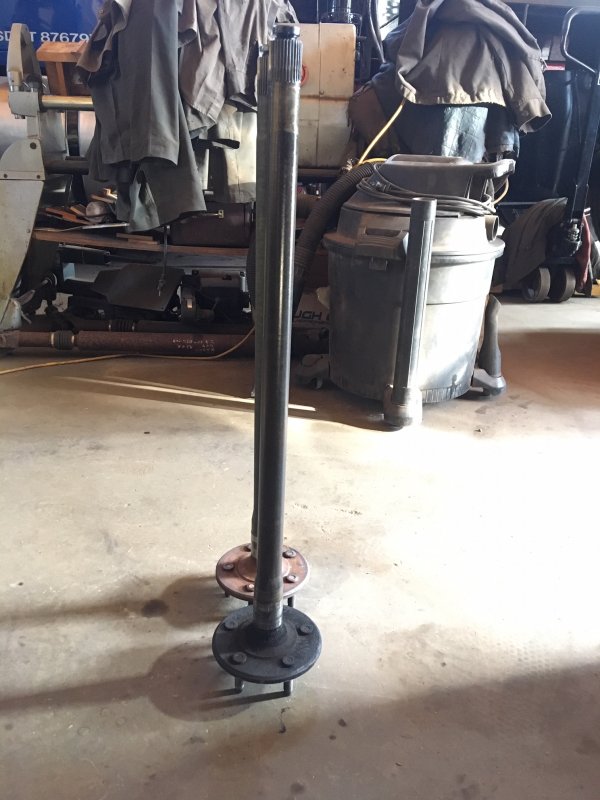 I pulled the replacement axle shaft out of an Explorer Sport (not a Sport Trac) and thankfully they both have the same length axle shafts. I assumed so, but you just never know lol. One interesting thing I found on that car though was that there was a dampener bolted to the differential on the passenger side, similar to the transfer case dampener. So I took that off the car too and figured I'd try slapping it on my truck to see if it makes any difference because why not - it can't hurt. I had never seen one of them before so I thought it was interesting. I will have to get some pictures of it.

Also, I did end up swapping my transmission out the other day. I originally planned on rebuilding the transmission I had got from a junkyard and then putting it in but really just don't have time for that right now unfortunately. So I took a chance and just slapped it in. It is noticeably quieter than my old transmission, shifts a little better and I did notice a slight improvement on the 40-45 shake. Maybe I'm just crazy but I swear it was a little better with just the trans swap, I only drove it for a few days with the replacement trans though before swapping the axle shaft, but I still think there was an improvement there. Either way, the truck is much more driveable now, the 40-45 shake has gotten a lot less dramatic, but I still would like to pinpoint the issue one of these days.

97Ranger3.0 said:
First of all; I'm not sure where best to post this, so if it needs to be moved elsewhere I'm sorry about that!

So, I've got a 1997 Ranger 4x4 3.0 5 speed regular cab 7' bed. I've had this issue since I got the truck 2 years ago and have still not figured out the issue. Basically, there is this annoying shudder/vibration that is most noticeable between 40-45 MPH, any speed slower or faster it is not very noticeable except above 60 MPH where it starts to almost qualify as death wobble. The best way I can explain the shudder at 40-45 is that I feel it most under the seat, it's not a steering wheel shimmy like unbalanced tires. It feels like there is something wrong in the driveline, as it almost feels like the truck is bucking back and forth slightly. It doesn't matter if I'm in 3rd, 4th or 5th or even 2nd; any gear at that speed causes this issue. The vibration gets just slightly worse when braking, but just barely. When the vibration comes back at 60+ it feels more like the original shudder plus something similar to a tire balancing issue so it gets quite wobbly. Also one thing I would like to note is that the shifter will visibly wobble back and forth at those higher speeds. With all that being said, here is everything I've done to the truck worth mentioning. Some of it wasn't necessarily in an attempt to fix the vibration but is worth mentioning to be able to be ruled out (hopefully).

- I've run several different wheel/tire combinations, both unbalanced and balanced at different times, not much difference. I only had one set of studded snow tires that made the problem worse. They made it so much worse that it was unbearable to drive if I had to cruise around 40-45.
- I've checked the pinion angle and currently have it set 2 degrees down compared to the transfer case flange; I will experiment with pinion shims soon and see if it improves with more angle, say 3 degrees or so.
- It has all new u-joints and at this point I've done every single bushing in the suspension, including new motor mounts and a polyurethane transmission mount.
- I don't feel any unusual play in any of the front end.
- I recently had the rear driveshaft worked on because I suspected it was out of balance and this was causing the problem. Upon inspection, the shop found that the slip & spline had too much play, so they made me a new one and a stub shaft for the transfer case end of the shaft and balanced the whole unit. This helped a little, but the problem is definitely still there.
- I'm running rear disc brakes because I swapped to an Explorer rear end, so I don't believe out of round drum brakes are causing the issue which I have heard of in some cases.
- There is absolutely zero play in the transfer case output shaft as far as I can tell from grabbing the flange and trying to move it. However, the transmission is a bit noisy in 4th and less so in 5th, not so much in any other gear.

That's about all that I can think of right now that might contribute. The only thing I haven't done yet is try to get the rotors turned. I don't suspect that warped rotors could cause this vibration because from what I've read that should only cause vibrations during braking. But, when I got the truck it had brand new front brakes so I've never touched them; so it is one thing that is a slight possibility that I haven't done. At this point, I'm not sure what else could really be left causing this issue so I plan on taking all 4 rotors to get turned today just to see if it changes anything so I can rule it out as well (or maybe I'll get lucky and it'll fix the problem).

Otherwise, should I take my driveshaft back to the shop and have them completely rebuild it? The rest of the driveshaft has what I'd consider minor surface rust on it and they didn't seem to come across any problems with it other than the slip & spline when they balanced it. Also, I was running a crusty junkyard driveshaft in my truck while they were working on my driveshaft and it didn't seem to change the shudder issue either.

I enjoy driving this truck, and have put a lot of work into it fixing and improving it over the years but this one issue is very frustrating. I tend to avoid highway driving because of this issue, but I would like to get this issue sorted so I don't have to do that any more because that is honestly just annoying and wastes time. Has anyone experienced anything like this? Is there anything I'm overlooking? Any input is appreciated.
Click to expand...

I have a 99 ranger 2wd and my was doing exactly the same thing. It is your gear mesh on the rear-end. Too much play. Tighten it up and it will go away.

Gmanalldayeveryday said:
I have a 99 ranger 2wd and my was doing exactly the same thing. It is your gear mesh on the rear-end. Too much play. Tighten it up and it will go away.
Click to expand...

Oh and I had a bad ujoint. It was the rear ujoint. Change it and see what happens.

One broken sway bar end link caused my 98 to do the same it was snapped but not fallen out..... Horrible shaking same speeds as you. But could be a wheel weight got thrown off.
You must log in or register to reply here.
Share:
Facebook Twitter Reddit Pinterest Tumblr WhatsApp Email Link