Here is a quick tutorial on using later style wheels on early trucks.

A quick background. Early trucks that use the manual or auto locking hubs need the centerbore big enough to let the hubs pass through. Later trucks don't have the big hub, so their center bore has a lip in it to hold a more traditional plastic center cap. In order to use late wheels on an early truck, that lip must be removed.

A photo of the center bore on the 94 wheel 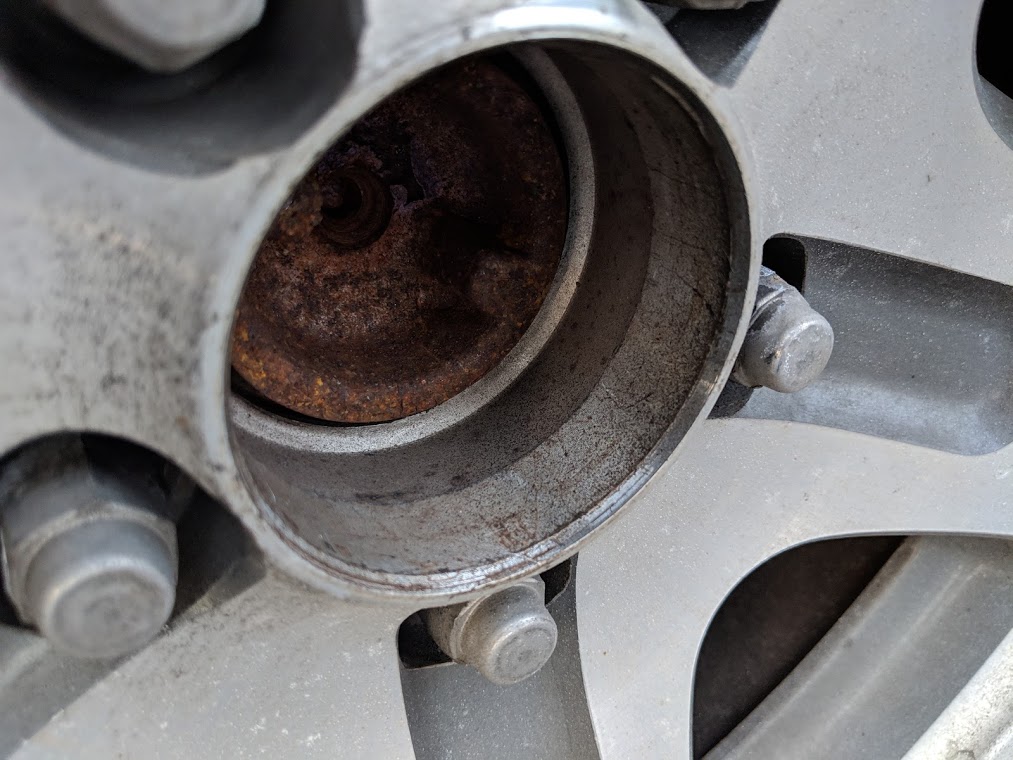 A photo of the later (05) ranger wheel 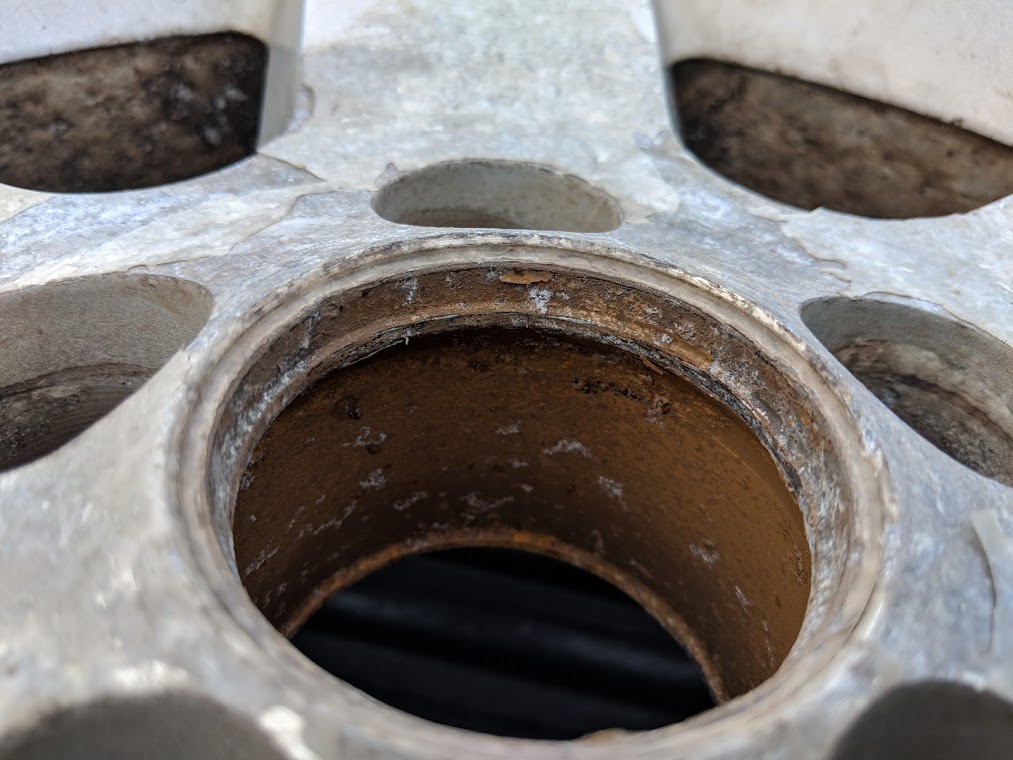 Notice that the later wheel has a significant lip that reduces the diameter. This lip needs to be enlarged to about 2.75" (70mm approx.) I knew I could likely tackle it with a die grinder and an afternoon, but I called a few machine shops just in case I found one that would do it affordably. Instead what I found was that all three shops refused to touch them due to liability.

My first idea was to get a 2.75" bimetal hole saw and clamp the wheel on my drill press plate. I nixed this idea for two reasons; 1) I figured it would be difficult to prevent chatter, and 2) I had no real means of making sure it was centered. If you don't get it dead center, there will be difficulty balancing the finished assembly since most tire balancers use a tapered die on the outside.

For this same reason I decided against a die grinder. It would be easy to get the clearance I needed, but difficult to remove precise amounts of aluminum and make sure the hole was centered.

So, out came the router and a carbide flush cut bit. Carbide is important since it is much harder. Using a cheap bit you will likely get about an inch into cutting and it will just stop, get hot, and start chattering.

Warning: strong suggestion to use ear, eye, and hand protection. You're making millions of razor-sharp fragments of aluminum at 18,000 rpms. I still have a sliver in my left thumb. If you're not down with earmuffs, I found that a blanket wrapped around the wheel with a rope or ratchet strap keeps the "singing" to a minimum.

Step 1: Since the ridge we're removing is about 3/4" deep in the hole, I selected a 3/8" diameter x 1" long flush cut bit. Take the 3/8" guide bearing off and install a 1/2" bearing in its place. This will leave a 1/8" of material and (at least on my 05 Ranger wheels) left me with 2.726" (69.2mm) of ID which is perfect for the hub to fit. It also helps to use a scotch brite or wire wheel inside the bore below that ridge. Mine had years of crusty stuff in there and doing this step helps give the bearing a smooth circumference to guide the bit. 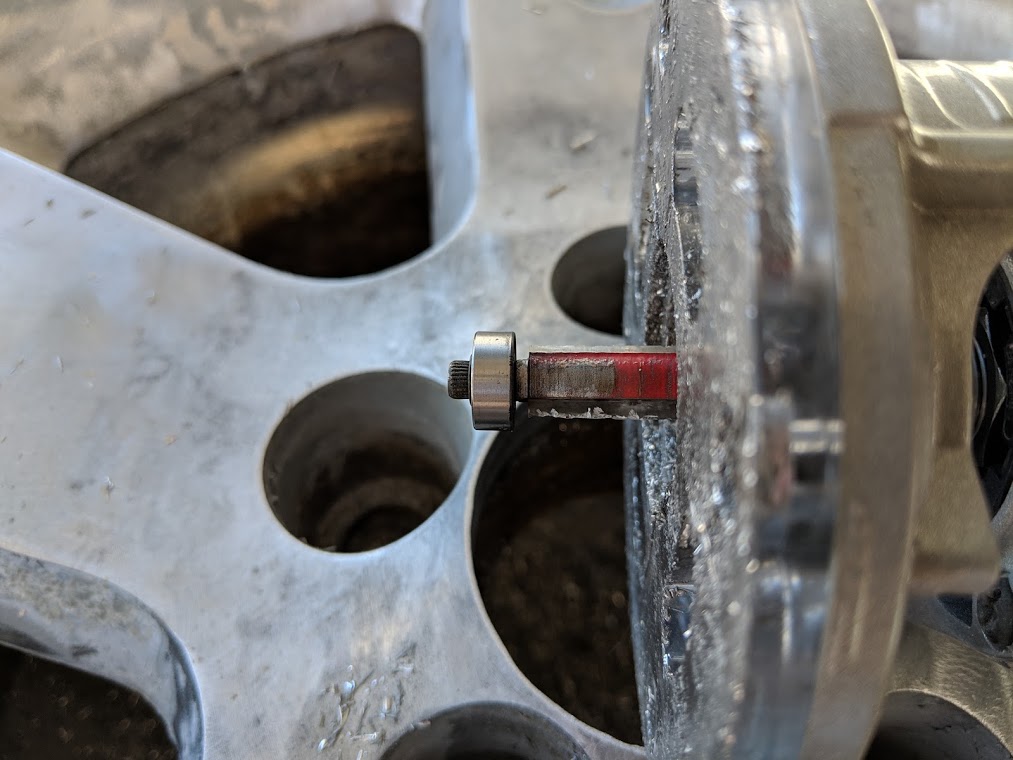 Step 2: Use lube (that's what she said). WD40 works well on aluminum, but my can of WD chose to be empty that day. Instead I used some cutting oil and put it around the lip of the hub bore.

Step 3: Start cutting. Keep in mind you are using a high-rpm machine on a much harder material than the wood it is supposed to be cutting. Be nice to it. Make multiple passes taking small amounts of material. Hold on tight, but I think you'll find that it's not much different than routing oak or bamboo. Tip.... keep a D/A or palm sander handy with some 60 grit on it. When you cut the aluminum, it leaves burrs at the lip making it hard to keep a smooth motion of the router. The plate on the router gets caught on the burrs. Pause occasionally to sand those burrs off.

Step 4: This is important. Check your guide bearing frequently. Mine decided to disintegrate and fall off but fortunately I noticed it before I went too far. Also important... I had trouble with the collet coming loose after a few cuts. I think the additional vibrations caused this, because that isn't something that usually happens with my router. 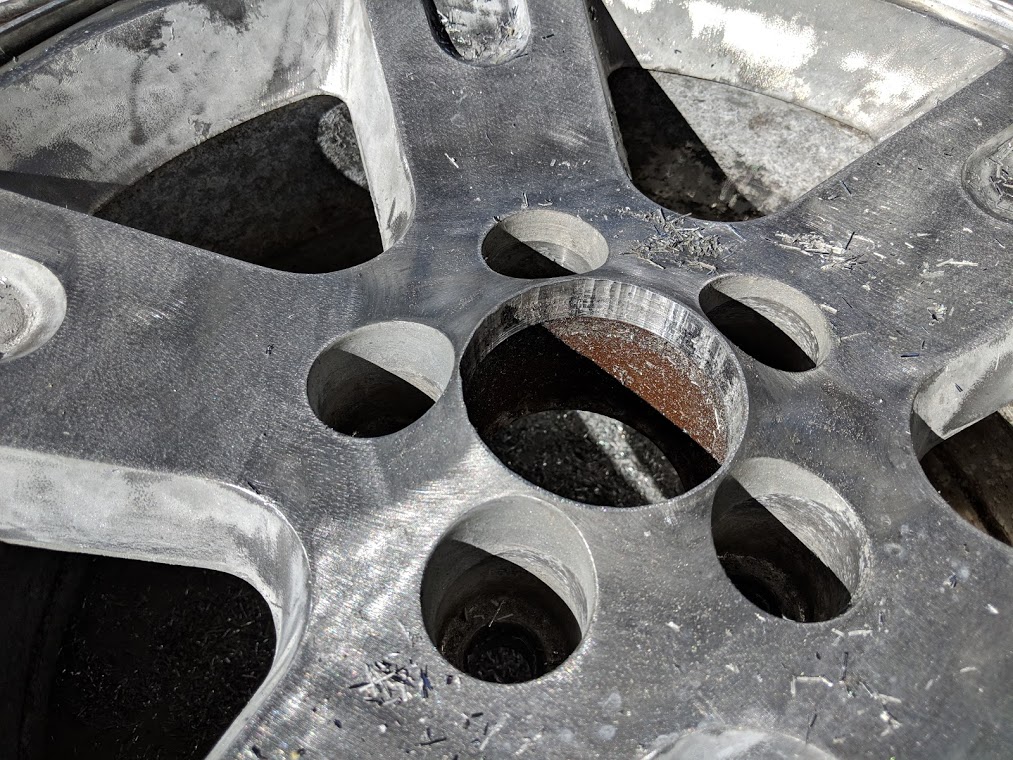 Step 5: If you want, you can stuff the factory rear center caps in the hole you just made, but in my opinion they don't look right. Instead I went to Amazon and searched for "75mm wheel center caps." It turned up a few hundred options of caps with an overall diameter of 75mm and a snap ring diameter of 70mm. Once they get here, I'll probably do one more cut on the wheels which I'll explain further. The depth of the 1/8" lip I left behind is 3/4" deep into the bore. The retainer clips on the center caps I got aren't that deep. After I measure how deep the clips are, I'll put the 3/8" guide bearing on the 3/8" flush cut bit and lower the bit further in the bore to increase the I.D. and leave a lip at the very outside that corresponds to the length of the clips. In truth, I bought a pack of 4 caps. What I will do first is stuff two caps in the holes without the additional cut to see if they stay in place. If they do, no more cutting is required. If they don't, I have two spares and I can hit it with the router again. 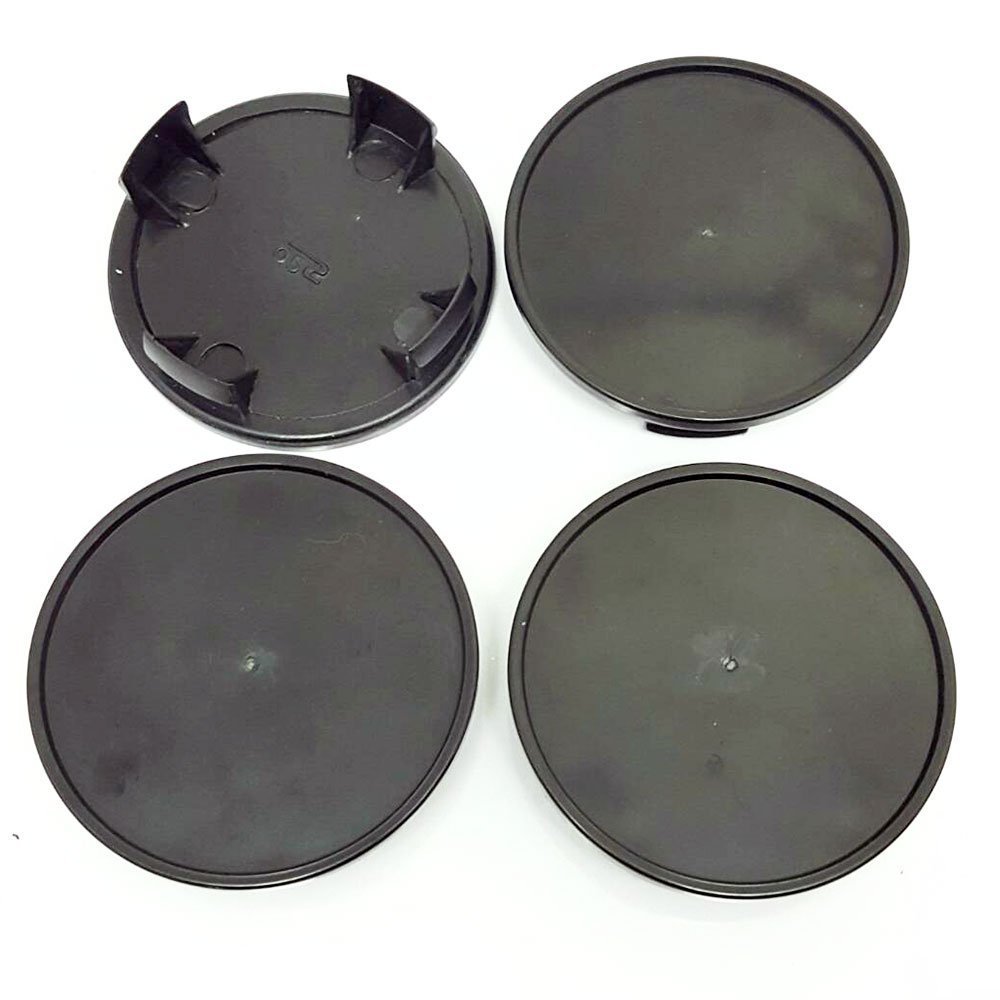 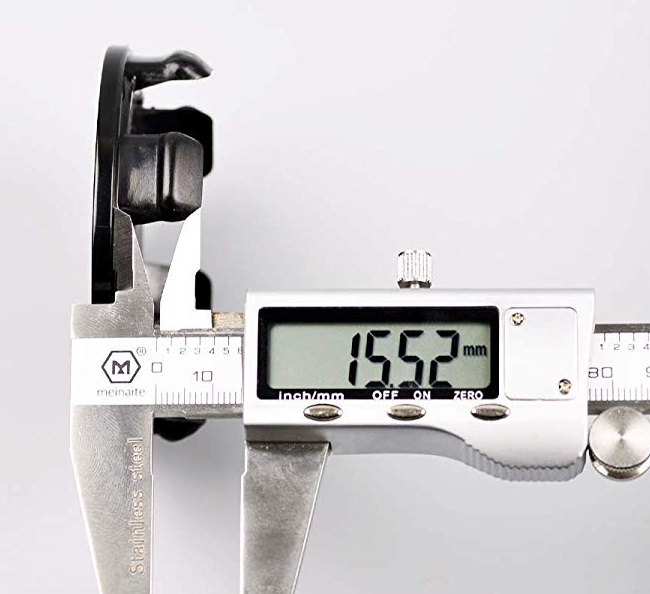 Important takeaways: Be safe, don't try this at home, no warranties expressed or implied, at your own risk, etc. Be careful with your cuts so that you end up with a concentric, clean cut. The most important part is that you maintain a hole that is centered. You'll have oops moments where the router tips out a bit and you gouge a little, but as long as the majority of the circumference is clean and accurate, the balancer machine will be able to hold the wheel straight. Mine balanced just fine. If you get yours "off," what will likely happen is that the machine will balance the tires, but you'll end up with a wobble on the highway. The balancer relies on the fact that the tapered dies hold the wheel on the machine at the same exact angle that the wheel mounting face will hold the wheel on the truck. If those angles are off by even just a wee bit, it might cause headaches. The nice part about using a flush cut bit is that you greatly increase your chances of an accurate cut since you are using the factory's machined bore as your guide.

…. and don't expect to ever use that flush cut bit on wood again unless you really like the smell of wood smoke. 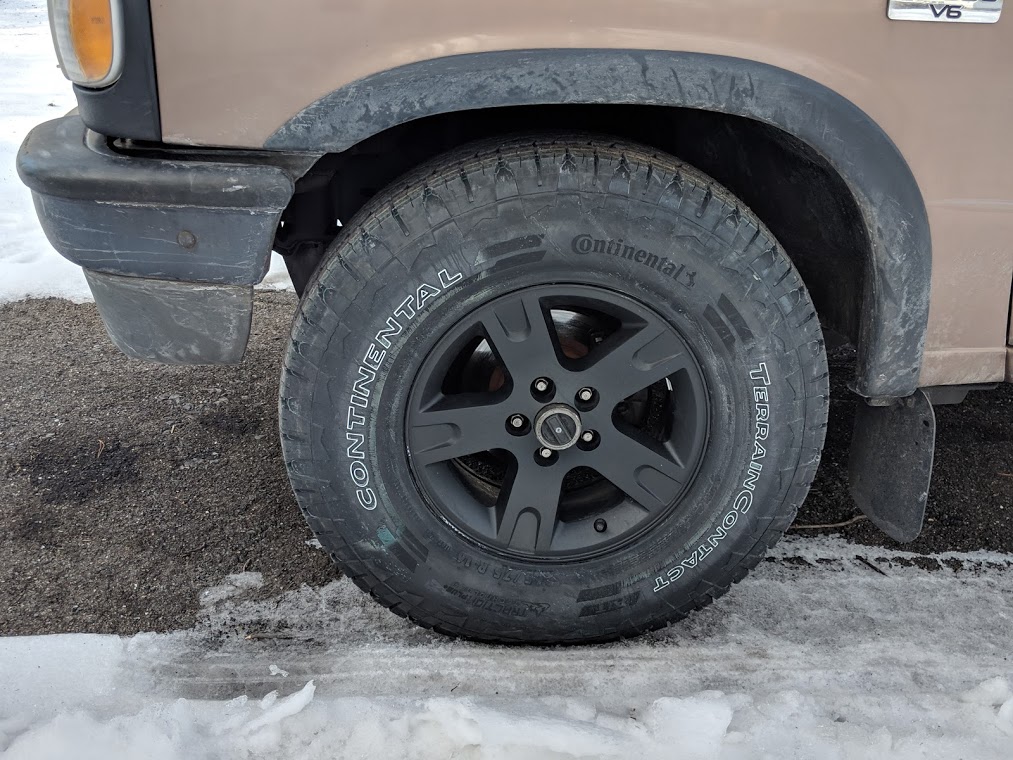