I’m going to log transforming the ‘97 extended cab 5sp 4.0 into “Rick’s Ranger Rig” here. 87 4WD Rick-storation is ongoing and I’ll leave that coverage in that thread.

My Ga Tech Prof buddies made it into a mini class lab project. Two interesting developments:

First, on my “5th wheel” design for the pivoting/floating frame over the tag axle, I can’t place the pivot point above the frame, I have to put it in the center +/- of the frame rail. This was not a matter of having the trailer ride up in a panic stop. Placing it on top ran the risk of tearing the top of the frame off like a tin can, the frame steel thickness is too thin. It looks like I have to box the frame for about 8 inches in front of and in back of the pivot point, and the pivot point will be a sleeve that as welded across the frame once boxed.

The other surprise there is I was thinking of like a five-eights or three-quarter inch steel rod from Home Depot inside a sleeve like a pipe nipple, but of course thicker than a pipe nipple. In hindsight what they came up with makes sense, The shaft has to be like the neck of a trailer ball. I have to use at least a three-quarter inch, preferably 1 inch high carbon/hard steel rod due to the sheer value. I got the shaft cheap by picking up a sway bar out of the scrap pile at the pull a part. I think it’s 1 1/8 inches and I’ll chop out the middle. See pic.

Here’s a question for you guys. Do I put that steel shaft directly in a steel sleeve welded into the frame? I was going to have a very tight tolerance, with an O-ring at either end of both sleeves, and put a grease fitting in the middle. Remember I’m not going to be running 1,000,000 miles in any kind of commercial service. What The “class“ came up with was to do a sleeve in a rubber bushing, kind of like what you have at the end of a leafspring. If I’m starting with a 1 1/8 inch shaft, that ends up being a pretty big rubber bushing, but these guys are saying it will completely transform the ride comfort without losing any strength. Thoughts?

For my trailer, the class came up with using a 4“ x 1“ thin wall tubing (not that thin) for the two main rails, and liked my cross truss/lattice design. Both 4 inch box beams would be stitched to a full length plate, something like 3/8 inches thick by six or 7 inches high, and it would be offset with the 4 inch tubing, resulting in about eight or 9 inches vertical height. It would be plenty strong for pulling and stopping, etc., but not very forgiving in something like an accident. All the big trailers you see are made out of heavy channel to make the trailer indestructible. My/our design is plenty sturdy and stable for pulling even my big Lincoln, but if there was an accident, it would fold up like a beer can, whereas the typical heavy duty equipment trailers pretty much fold up whatever they run into.

So, I met with a couple guys from the Georgia Department of Public Safety and a guy from the DOT, all friends, and there was good news and bad news. As long as it is “not for hire“ and labeled as such, there is no problem with the drivers license, with the load ratings I’m looking at, etc. etc. with one exception: the length. If I want to make it long enough to hold my biggest Lincoln or even the square town cars, I will exceed the “fooling around limit.” While I still plan on doing some articulated vehicle driving training, I don’t think I’m up for actually getting an articulated CDL, so the trailer length will probably be limited. I can still do about 15 feet of deck. One option I already ruled out was to have the trailer ramp up and over the hitch pin, but I wanted to be level and flat, so I ruled that out.

On the trailer, I plan on making two different tongues that can be bolted on or bolted off. One will be the elevated fifth wheel, and one would come straight out of the trailer with a military hitch.

There are still details to be worked out, but with this preliminary information, I plan on starting to turn wrenches and cutting and beating and banging. I’ve accumulated most of the parts I want and I need, and remember like the 87 4WD Rick-storation, i’m going to build a solid, safe and roadworthy, but I don’t plan on spending a nickel I don’t have to spend. I’ve been horse trading around the camper caps and the trailers and the wheels, etc. and so far except for the new engine in the 87, I am breakeven including the cost of the trucks.

And one last thought, an image I thought I’d share. The shift knob in the 97 was cracked and was hard on the palm of my hand. I ordered one of the number 13 pool balls, but it hasn’t come in yet. From earlier texts I know that a lot of you guys like the red trucks and like the redheads, so I went to the Goodwill, blew 79 cents, and I got a temporary shift knob. Even looks like my gal, but don’t ever tell her I said that… 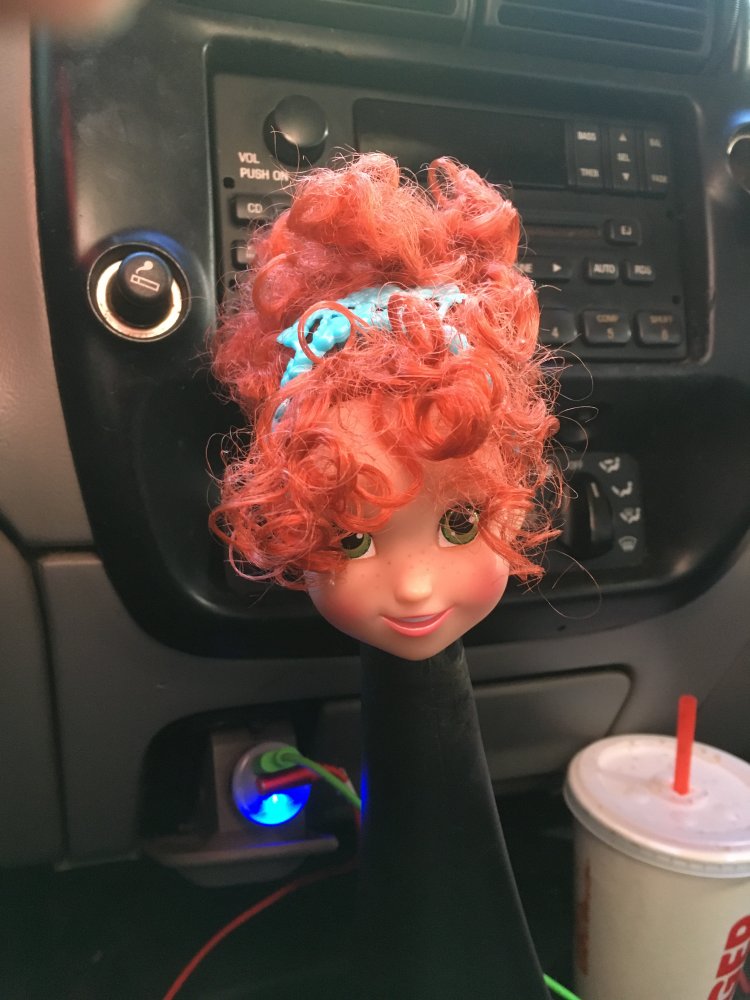 Ok, more help needed. Today was gas tank/gas gage day at the Villa W. I pulled the two tanks on the F250 diesel, and I was planning on pulling the tank on the 97 Rick’s Ranger Rig, but I never got to the ‘97. Here’s the question: How do you get the F’n fuel lines off the F’n sending units?!?!?!?

I bought those little plastic shim tools. When I push them on/in, just before they’re fully seated, I can feel them kind of pop into place, which I assume is opening up the clips inside the fitting. I can twist the female housing around very easily, but I can’t pull it back or budge the fuel line off the sending unit.

You guys just did a post on homemade tools. I made a wooden driver that would straddle the steel line so I could tap the shim/female housing back. That wouldn’t budge. Then I made a different wooden driver that wouldn’t push on the plastic shims piece, it would push directly on the female metal housing while I pushed the plastic shim in. It wouldn’t budge. Then I very carefully put a brass foil type shim around the fuel line fitting, gently put vice grips on that, and tried to drive the fitting back by tapping on the vice grips (with plastic shim tool in place). No luck.

Then I hit my head for the third time on the 2” receiver and gave up.

I watched every video on the net. I sprayed them with penetrating oil. Tomorrow I’m planning on gently tapping a tiny screwdriver in in several places to try and pop the internal clips loose if they’re frozen.

On line, everyone says it’s easy, but a little trick. I’m usually pretty good at the little tricks, but this one is beyond me. What am I missing?

the "clip" has an oval shaped hole the line passes thru. push about 1/8 inch on the correct side and the oval lines up and the line pulls out.
push on the right side, the taper on the left moves over to release the line. the taper allows the line to be pushed in without having to manually push the clip over.

I figured that out after my frustration. 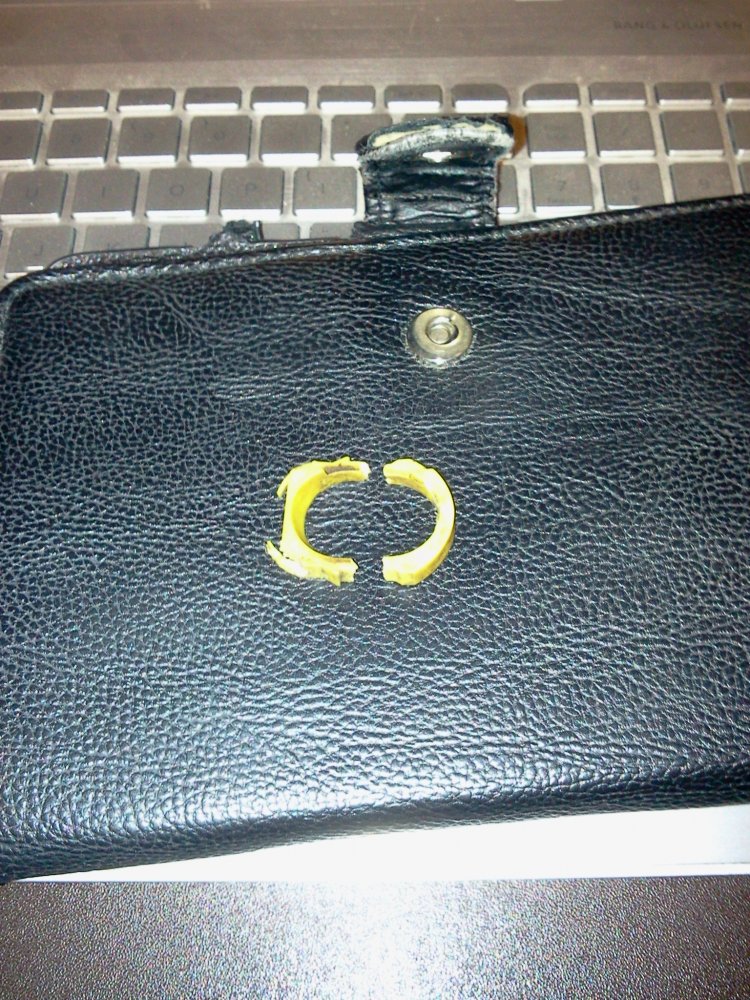 Thank you so much. Coincidentally I’m heading out in about 10 minutes to try it

For others, I found this link, and I think it might be very helpful. I’m crawling out there right now To try again. 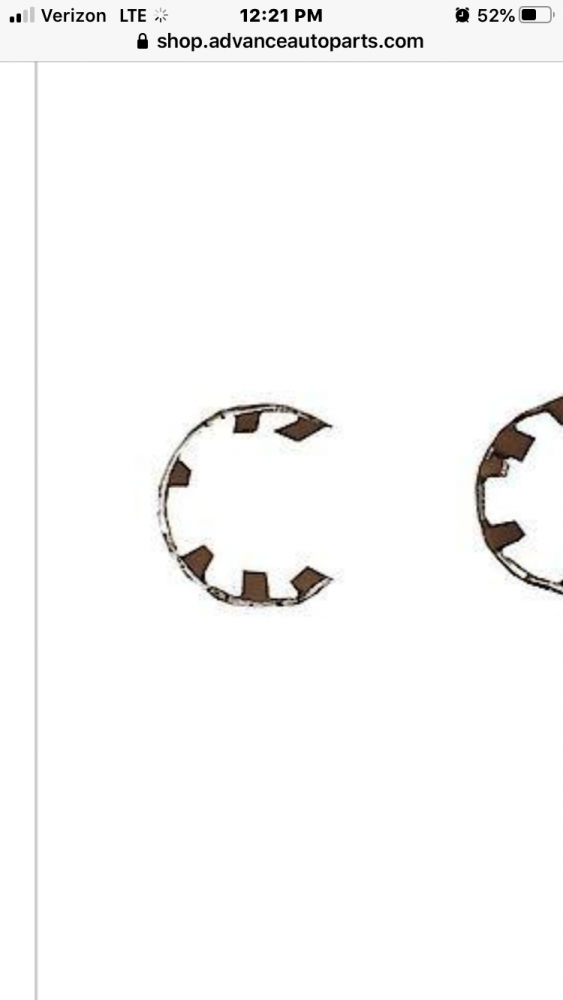 This is the clip on my sending units. The plastic clip pjtoledo shared is for something else, but still many thanks, it got me on track. 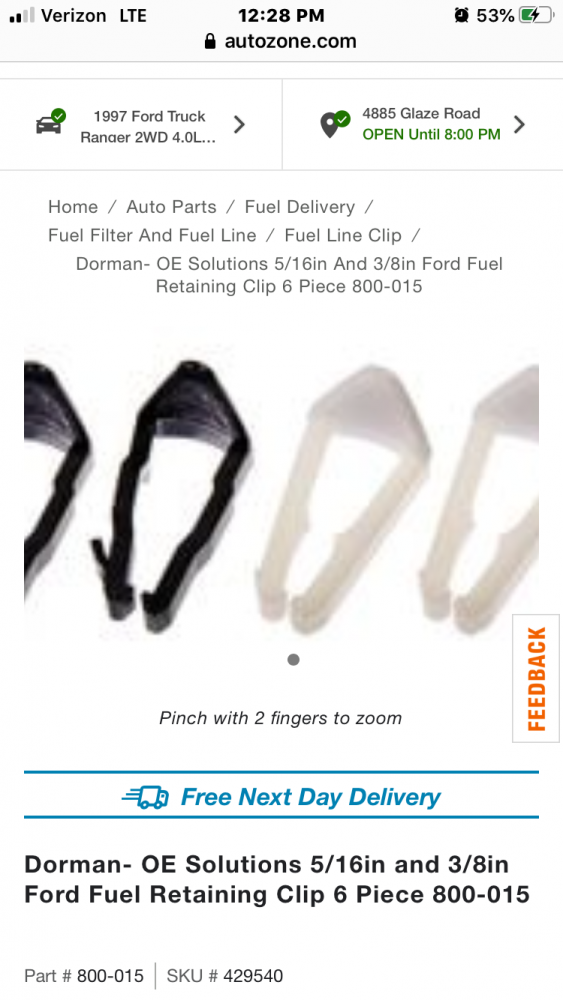 These black and white clips are on the other end of the lines at the tank selector valve. & again, this is on my 1996 4WD F250 7.3 Diesel, but the reference materials say it’s the same thing on this 97 ranger.

By the end of the day, I’ll post a couple pictures and a couple thoughts. Either that or a link to my obituary....
Last edited: Nov 16, 2020

I love it when answers just lead to more questions…

It was sprinkling rain on and off today so I never went back under the F250, but I think I figured this thing out. The clips on this F250 seem to be high carbon steel, hard and springy, but they can still deform. This is what I’m thinking: when you drop the tank, it ends up hanging down on those fuel lines, which may bend the fingers on the clips further inward. Then, when you’re struggling to pull the lines loose, you keep putting pressure on those little clips, bending them inward even more. Once you do this, the little shim tool won’t push the clips fingers out far enough to get them to clear the sending unit line collar. I think the clips deform as you pull on them, and they bend further in against the stop on the sending unit, and that makes them even harder to release.

So here’s my question: is there a way to just force the line off even if you damage these clips? The clips are available at the auto parts stores for about five dollars. So there must be some way to get them off, even if you break them, without damaging the lines or the sending unit. Yes/no? How?

If you can't get them off any other way, you can cut the line close to the fitting then cut the fitting off. You can buy replacements on a short piece of line. Just need a double barb to put them together.

Thanks. That’s actually my last choice if I can’t get anything else to work. I joke on my “Rick-storation” and on Rick’s Ranger Rig” that I’m going to do it as cheap as possible, and I will, so I don’t mind modifying things as long as it’s safe. But on something as nice as this F250 I like to keep it all original. I bought it new and it’s still almost looks new.

A universal issue on these is that the diesel eats the pick up screen and it disintegrates, or if you put a new screen on it and buying your truck around, the screen falls off. I solve this by drilling a very small hole through the side of the pick up line, then I slid the plastic pick up over the pick up line, and I drilled the pickup in line with the tube it goes on. I then ran a piece of stainless steel wire straight across it folding in each end so it won’t come out. The annular space is smaller than the holes in the screen, so I don’t think this is going to hurt the performance

One tank is up ready to go, the second tank is built but still needs to go up. And then I have to flush the lines, new filters, etc. I think I’m gonna have it running the way I want by the end of the day on Sunday. That leaves me free to start tearing ricks range of Reager part for what I want to do with it
You must log in or register to reply here.
Share:
Facebook Twitter Reddit Pinterest Tumblr WhatsApp Email Link