I've got an '03 with a center console (the one with the armrest assembly) that looks like this:

I'm trying to remove it so I can fix its mounting bolts (their heads pulled through the floor).

I'm stuck on two screws (of some sort) that are in recessed upsidedown wells at the front of the console near the floor. The clearance is too short to get even a stubby screwdriver in there so I tried a screwdriver bit. I turned and turned and it seems like there's friction but nothing ever comes out. I finally managed to get a mirror and some light in there and it looks like it could be a hex screw, but i can't tell for sure. And none of my hex keys will fit up in there anyway (the short end is too short, the long end too long).

Does anyone know what those two screws are?

Doing searches on this, it appears Ford changed the design somewhere in the 2000's, as most people talk about pulling screws from the cupholders. On my console there are no visible screws from the top in the front at all.

I had the same problem when I was pulling my console out. I eventually broke down and read the shop manual... The cup/coin holder is held in with spring clips. You just have to pull hard.

ah! thank you!! that was not obvious.

No, it wasn't. I tried pulling on mine a little because I figured it had to come out and I couldn't see any screws, but taking something like that apart for the first time, I always run the risk of breaking something by pulling too hard...

The screws that hold the consoile to the floor (after you unbolt the armrests from
it's internal support frame) are UNDER the cup holder.

Just grab the cup holder under the FRONT edge and pull UP
The two screws are then in plain sight.

Is this the same deal for a '93 console? I got the rear loose but I'm stuck at the front. 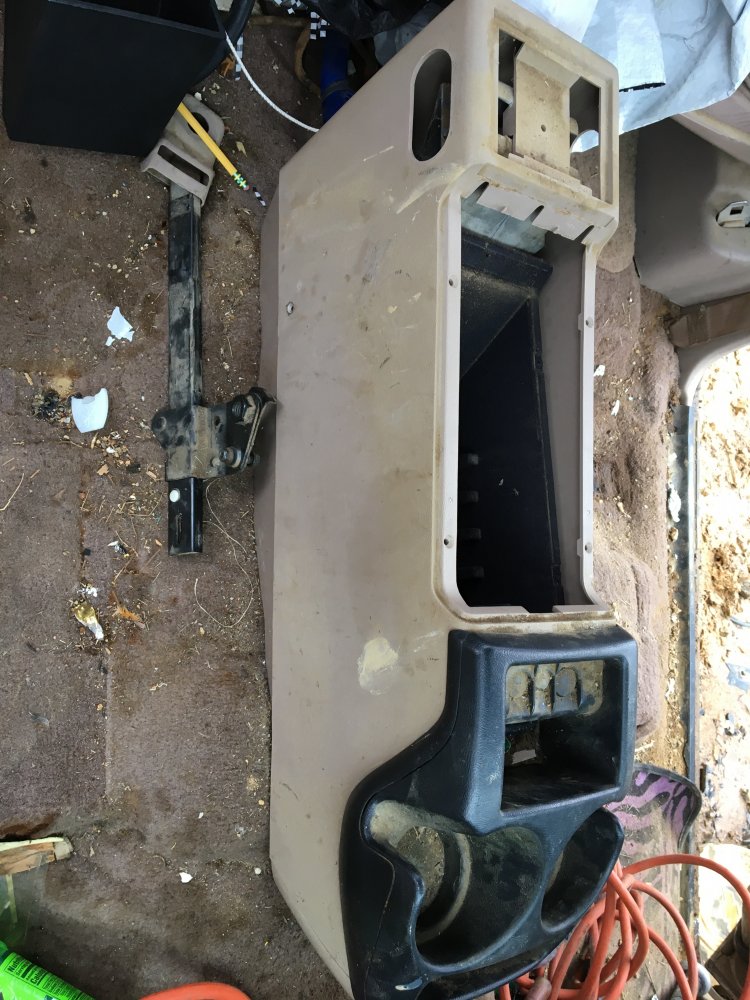 Update:
Console DOES NOT come off by pulling on the cup holder/coin holder area. After digging thru 30 years of dirt I found 4 screws in that area - black part comes off then two more screws underneath. I did not, however, manage to remove the seat belt tracks in the above photo (only one visible). Held in by two #50 Torx screws, wound up rounding them both off.

@Rimjam We're pooling our resources to get you a "shop-vac"

I know, pitiful, huh? Poor ole Ranger was used for junk storage before being dragged to recycle yard. Surprised me that the bucket seats were in very good condition & console cleaned up well, pad wasn't even torn.
You must log in or register to reply here.
Share:
Facebook Twitter Reddit Pinterest Tumblr WhatsApp Email Link