I want to set up to take my dog in the cab plus part. I can gain a little room there by taking out the jump seats, which I don't see that I would ever use. Besides the fact it will probably leave an ugly spot, which I can cover with floor mats, do you see any downside or problems to doing this? It looks like there are a few bolts that hold them in. If these are drilled through so water/debris could come up through, I could just put the bolts back in absent the seats. As to the seat belt for them, I'm not sure if they can also come out, but that's not a big deal.

Side comment, I got the WeatherTech dog barrier, it's pricey, but, so far, without actually using it, it seems really good in its construction and I like having bars vs mesh. It's totally adjustable. It's supposed to set vertically, but there's flex to the top/bottom ends so I'm pretty sure you actually can put it at an angle, that maximizes space for dog while still letting me put the seats back far enough and with enough tilt so they are where I would want them anyway.

I actually took the jump seat out from behind the driver seat. No one would ever sit there (no room) and it gives me a little more room to store stuff. There are no problems as far as the bolts getting water or debris into the cab. Also, the seatbelt does come out, but you have to take apart the door to get the buckle removed. It helps if you tape over the hole that will be in the door panel, it cuts down on noise.

Are we talking about the jump seat that fold into the side of the super cab? Do they not fold up if you have the doors?

I took both of my jump seats out last weekend. I also removed all the seat belts and hardware for the jumps plus the center section on my front seat. The plan is to build a nice storage unit about 6" high with hinged lids. I've never needed the center seat up front nor do I travel with Hobbits in the back. The only through holes in the floor are for the center bench seat so I just reinstalled the bolts. I've haven't noticed any change in noise level yet by removing the jump seats.

@Roert42 Yes they fold up, here's the thing, taking them out gains a little bit of space and I'm trying to make it so my dog can be back there. I got the WeatherTech barrier, which is very well designed and well made (can't say that about many things these days). But it has to go in at a bit of an angle slanting back otherwise you are riding with the seats not comfortable position. You can do this, even though, of course, vertical is better. Anyway, although my dog isn't huge, taking out the seats would gain some room and maybe the difference between her being able to turn around and/or just have a little more space. It doesn't gain you tons, but it gains something, and if I'm never going to use them, then I might as well take them out. Hope that makes more sense now.

I know you could get the trucks without the rear seats, they came with a hatch, the hole a storage compartment. However this may still take up the same amount of room.

That's interesting, I never saw that. Sounds kind of cool.

I really like what this guy did for his rear section and will do something similar but I will store the jack under the hinged door instead of leaving that plastic cover in place which takes up room. It allows for some covered storage and a completely flat platform for the dogs.

How-To & DIY Submissions - How-To: SuperCab Storage Box - As many of you know, there's a serious need for storage in these trucks. Sure, you can just throw stuff behind the seats, but wouldn't it be nice to have a dedicated, covered storage area for things like laptops, fire extinguishers...
www.ranger-forums.com 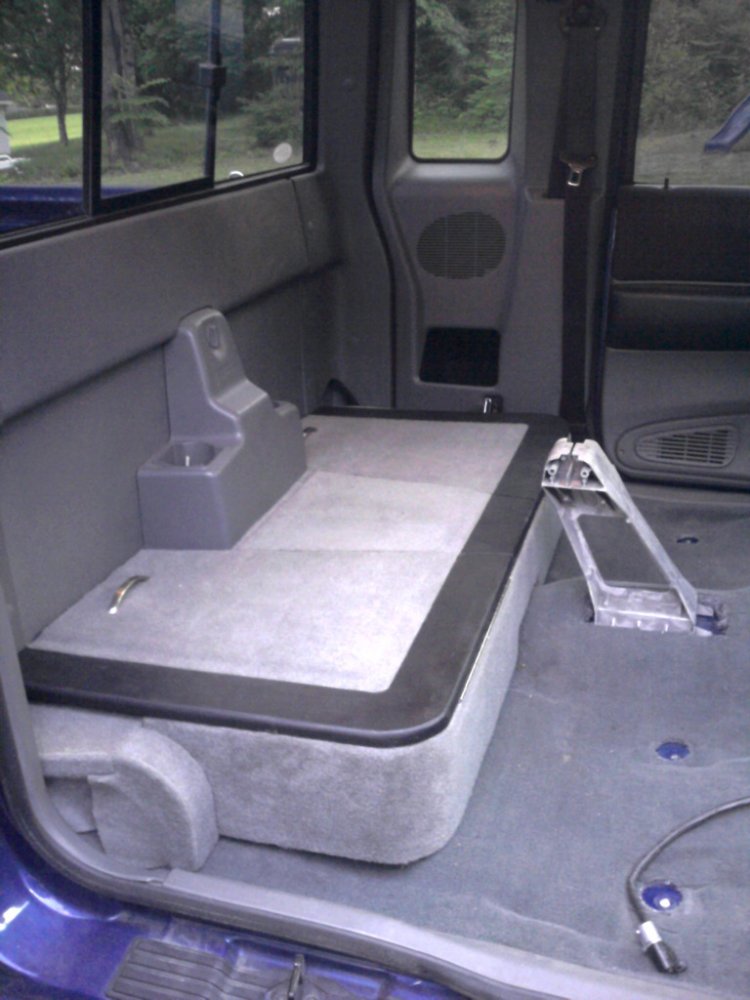 OH man that is SO cool. Looks like he did a little bit of custom work there. Super nice! Thanks!

I actually wanted some kind of platform so the dog can look out the windows. The only thing I would do different here, if possible, is use recessed handles that would lie flat. But it doesn't look like he's using this for a dog platform.

I think I could make it just a little deeper so maybe it comes up to the level of the cup holders. Then you could really store a lot of stuff in there. And, yeah, like you say, move the jack and cover. It would leave just a little curved place in the trim, not bad. With a bit of plywood and some carpet and a stapler and a few hinges and handles, it wouldn't be too hard to modify this idea just a bit for one's specific purpose.

If you go higher with it, and cover over the rear door pockets, I guess that's not a big deal. Although, it appears, if you didn't drive crazy, you could actually use them for watering dishes.
Last edited: Sep 13, 2021

Depends on how tall you are probably. The higher the platform the less seat travel you have. Water dishes! LOL

Roert42 said:
I know you could get the trucks without the rear seats, they came with a hatch, the hole a storage compartment. However this may still take up the same amount of room.
Click to expand...

He has rear doors so they fold on the back wall. The old style don't interfere with the critters...I just have a raised floor with rubber matt.....well...truck mudflaps ..

I took and stacked plastic shelving....because....I have water flow.

Well, yes CrabGuy, you make a good point, and that's what I stuggled with in putting in the WeatherTech dog barrier, which is really nice, well made, well designed, but, I'm not sure I actually even need it, there's only one place the dog can get thru and that's in the center so huge barrier is likely way overkill, certainly there's a way to address that. If you stop short, dog can't actually fly forward, it would be against back of seats. Anyway, yeah, that's a problem, you can have "lots" of room at the very bottom but what I did was put the seat where I like it then see what's left and you're exactly right, the angle of the seat would make you want to have the platform lower, not higher, thanks for pointing that out. Maybe simplest thing to start is just get the jump seats out, and maybe the jack arrangement (which of course would have to go somewhere) then see how that works. If dog cannot turn around in the space I think that is too small. Could put passenger seat more forward. Might take a bit more thinking. I tried dog with the barrier in there and it was like, hey, I'm stuck here, I can't even turn around. That doesn't work.

Roert42, certainly you don't mean you have water flow in the truck, right? heh. You must have a small dog or you are putting your seats far forward. My dog isn't huge (German Shepherd) but she's big enough. Here's the thing, taking out jumps gains about 6", that is the difference between being able to turn around or not. I think. It's close. Like I said if the pass. seat were just a tad forward from what I like for driving on my side, that also would help. If the platform/storage area were about 3" high, that would bring it level to the higher part of the floor in the very rear, and would be enough room for the jack, and just leave it at that. Or maybe just f the platform altogether, take out the seats, leave the jack as-is, and try that.

I took out crappy aftermarket floor mats that came with it for the front and put in Saab really thick floor mats that have millions of little nibs that grab the carpet so it doesn't slide around. After market thin one was always working its way up into the pedals area which is really bad. Saab at least got that right, of course, those could be made by Weathertech. Basically the only thing I saved when I trashed that car, actually had a couple sets of them so I can layer them in the back and really cover it. Dog is always shedding so anything that helps in cleanup, I'd use.

Thanks, this is helping me in my thinking.

I had one of those pet barriers in the rear of the Subaru. Our lab used to just jump over the seat. It worked but it did some damage to the headliner where it pressed against it. It also had an irritating rattle so it's been hanging on the wall for 3 years now. Good luck on your project; I'll be starting my platform after it cools down some here.

Ah, I took out the 3x 1/2" bolts holding the driver side jump seat to the body. There is yet one more bolt, looks like it's behind the seat belt mounting, looks devilish to get to it. Am I right about that? Maybe can get open end in there. You guys who have done this surely know...
You must log in or register to reply here.
Share:
Facebook Twitter Reddit Pinterest Tumblr WhatsApp Email Link