I'm pretty sure I can squeeze it in. A sm465 is pretty damn short, and if I use the outer piece from a cv joint with the inner cv pieces and just 2 u joints, it makes for a perfect short driveshaft.
I found a set of fender well dump headers the other day for $40 from a80s dually Ranger show truck that had a 350 in it. Was on Craigslist forever and didn't move so hes in the process of junking it

With a sm465 you may be able to. Those are short. I guess measuring will tell for sure. I was going off a zf5's length witch is a decent amount longer. I should of asked what tranny you were going to use. I think the shortest I was going to be able to make an intermediate shaft was like 9in. But if you're starting from scratch it shouldn't be too hard to make everything fit.

Yeah one of my divorced cases came with all 3 driveshafts, and my axles came with driveshafts for a mated case. I have plenty of options and material haha

You should have swapped te 2.9 for a 5 horse Briggs if you want the d35 to live.

I've been up to the rockers in mud already and it didn't hurt it any. And like I said, I'm not too worried if it breaks

Figured I hadn't updated this in forever, now's a good time.

Dana 35 lived with 40s pretty good, I rolled it July of '12 and pieced the truck back together with extras I had. Plan I had at that time was run the 37" military tires I had with 5 lug 16.5s. Tried pushing the Dana 35 forward to keep the fender cut minimal. Didn't pan out well.

Lost the Dana 44 scout rear axle one night leaving work, traded a pair of boggers for a cab and chassis Chevy 14 Bolt, threw that together with 4.88 gears and a Detroit locker I had already, and a Ruff Stuff disk brake kit. At that same time I bought a complete '75 Chevy 3/4 ton 8 lug Dana 44, and swapped everything from the knuckles out on to my front to get 8 lug to match the rear. This point it got 6" Superflex 78 Ford coils and 38x12.5 Swampers.

Drove it like that awhile and got offered a complete engine trans and transfer case from an '84 F250 for $100 if I stripped the truck all down for the guy. Got the motor home and found a tag on the block, Remanufactured by AC Delco. That's right, a Ford 351w built by GM.

Engine went in spring of '14 with the T19 and hydraulic bellhousing. got a NP208 from a Bronco for free because the guy thought the chain had too much slop, hasn't broken yet. Motor swap was rushed and in hindsight I see 100 things that would have been better if I had taken my time. Built a new bumper and threw on a hydraulic Mile Marker winch, which camped the already champed engine bay worse. Thanks to moving, a leaky Holley 2100, a worn out Duraspark distributor, and a myriad of other minor issues I lost ambition, and it sat at my parents house rotting.

Lost the motor in my daily driver spring of '15 so I tore into the truck one weekend, got it "good enough" and it became a daily drive for 2 weeks while I had my motor done, only 8 miles to work. Around that time I became good friends with a Yota guy with skills much better than mine. He's given me ambition again and has a knack for finding good deals on parts. Since then its gotten a Edelbrock 650 that was tweaked for off road, a HEI Distributor, and a swift kick in the ass, which bring us current.

This weekend I mounted brand new 39.5x15x15 Swampers and cut the bumper apart for a new winch after selling the hydraulic winch.

More pictures later when I go home and dig through my old phones.

Not bad. I love 1st gens. The only difference is that I want to build a 13B-REW (rotary) and get it low.

Nice rig though. Very well thought out for the most part.

3 weeks after the last time I posted, I buried the truck glovebox deep in a pond. Got it winched out and back home for repair.

Put the truck back together fall of '16, drove it all over hell and back, ran trails every weekend with a small local group, basically unchanged beyond maintenance stuff.

A broken exhaust hanger fall of '17 led to a series of compounding OOPS's, peaking with a very overheated engine, and it got parked for a year until I verified the motor was in fact fine, heater core as blown to pieces, at which point it still basically sat while I bought a house.

This spring I went out with a fresh battery, got it started, and drove it the 1/2 mile from my fathers to my new house, first time on the road in a year and a half. Spent most of the summer distracted by other things like my M715, the huge garden we put in, and planning a wedding, but a month ago I tore it apart and into the new garage it went.

So let's see how the phone version likes doing pictures.

Truck had water in the glovebox and tail light was under. I must say, hip waders work awesome for days like this. 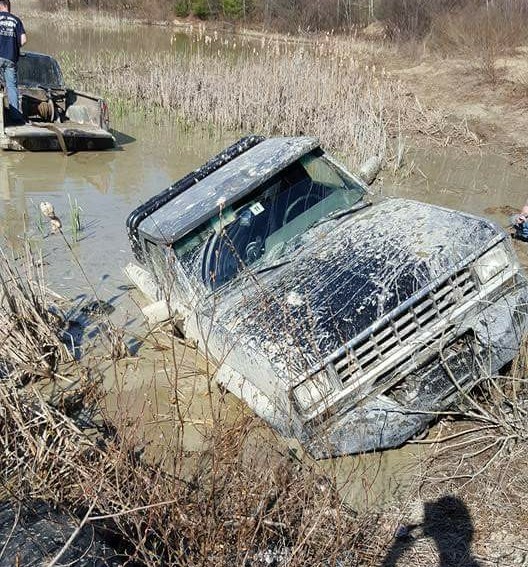 Next pictures are from this spring, the reason why it went under the knife, again. 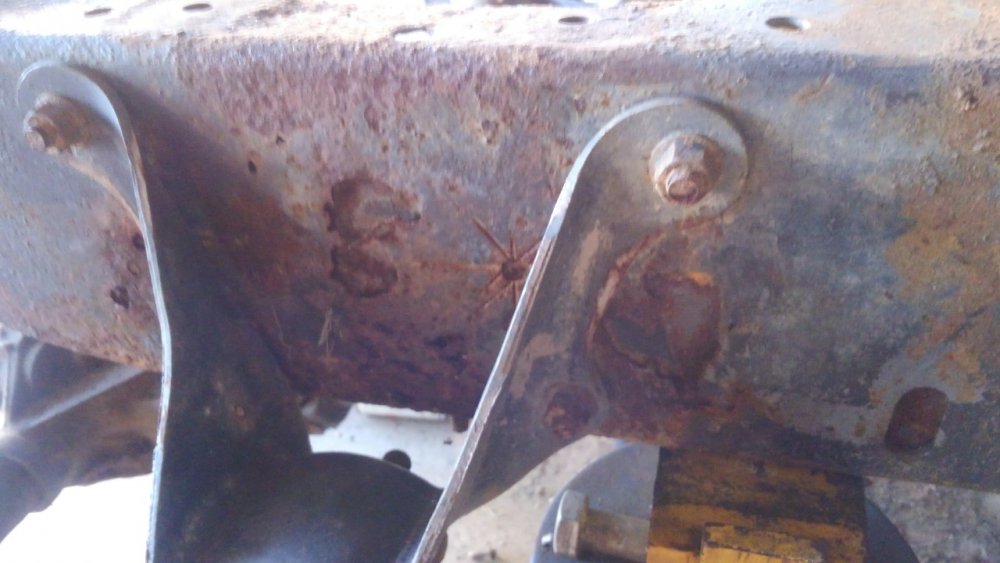 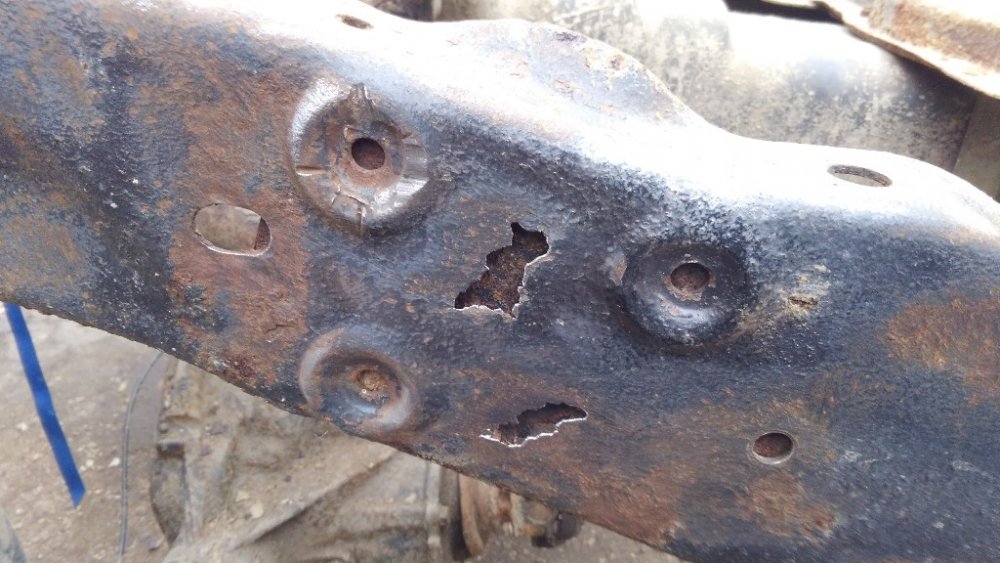 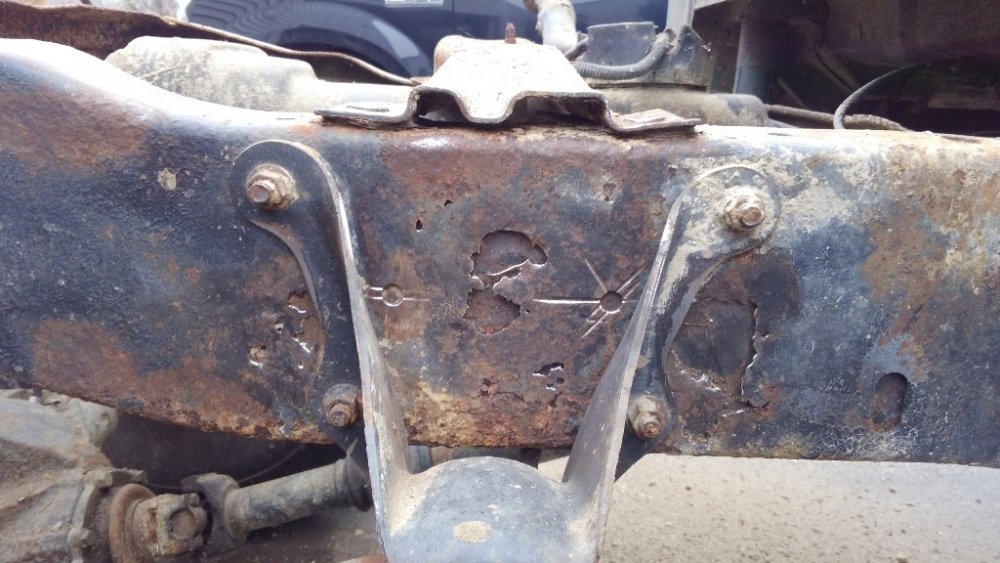 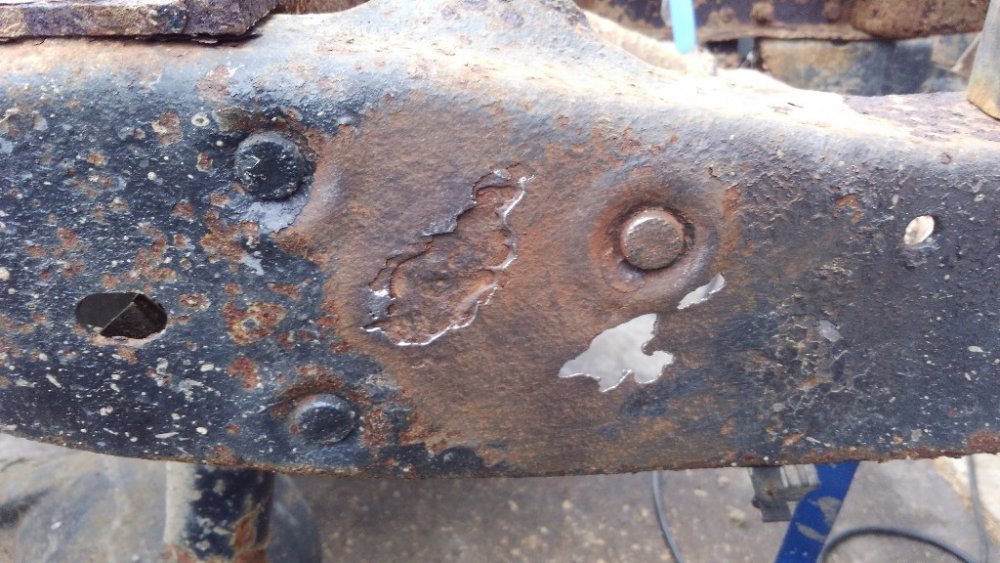 Some pictures of the process of patching the frame up. I had patched it several years ago, so once the hangers were pulled, I cleaned up what was there and hit it with primer. Made a patch template from beer box, little help from a borrowed plasma cutter and sliced the 1/4" plate into a workable patch. Goes up under the cab, under the cab mounts, and past the spring hangers, where it's through bolted in multiple spots for strength.

Then we added some 4" channel crossmembers, and then ran channel lengthwise to tie the crossmembers together. Some inner patches behind the rear axle tie everything together with the rear shackle hangers. Plan is for a receiver hitch, and possibly the Ramsey RE12000 I have sitting under the bench. 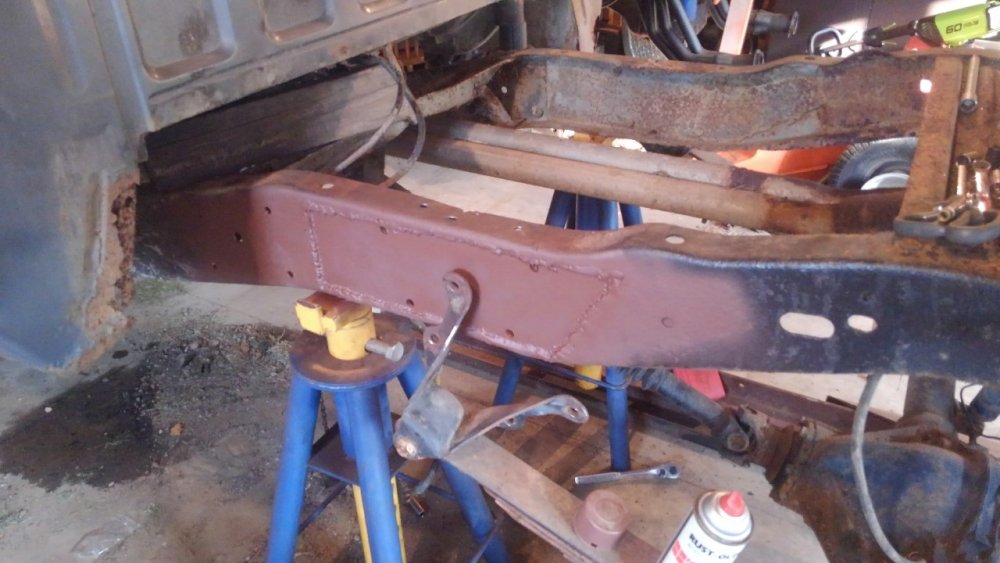 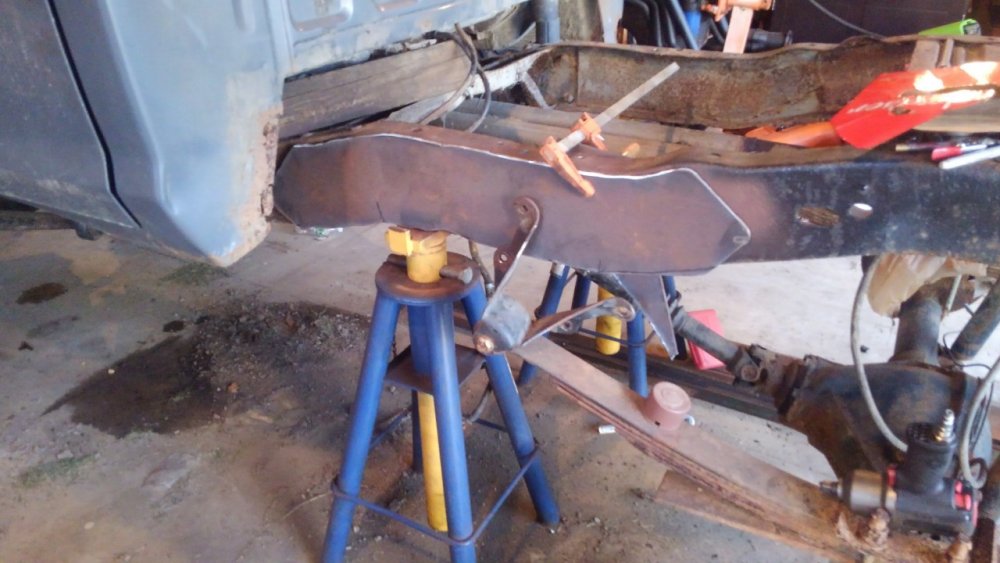 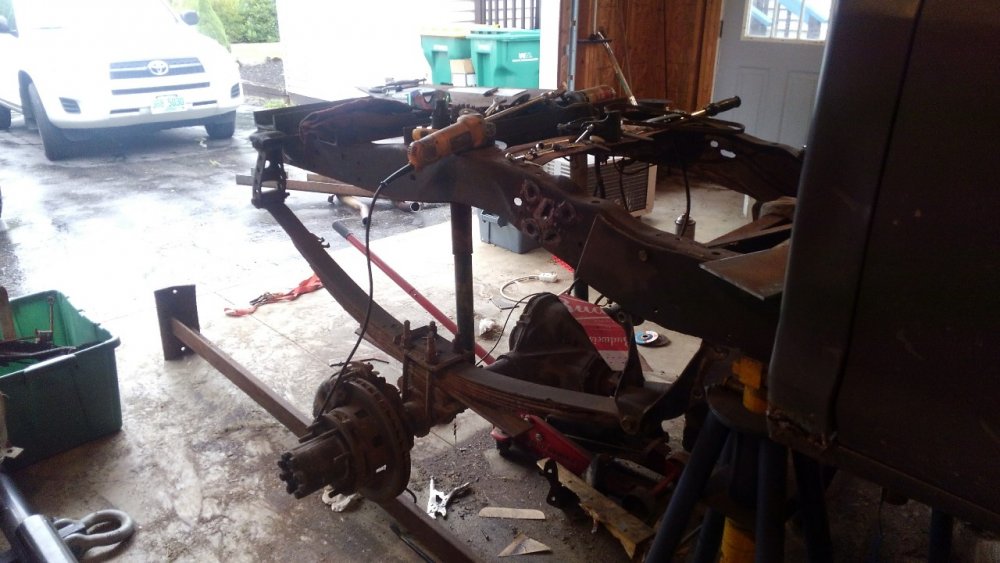 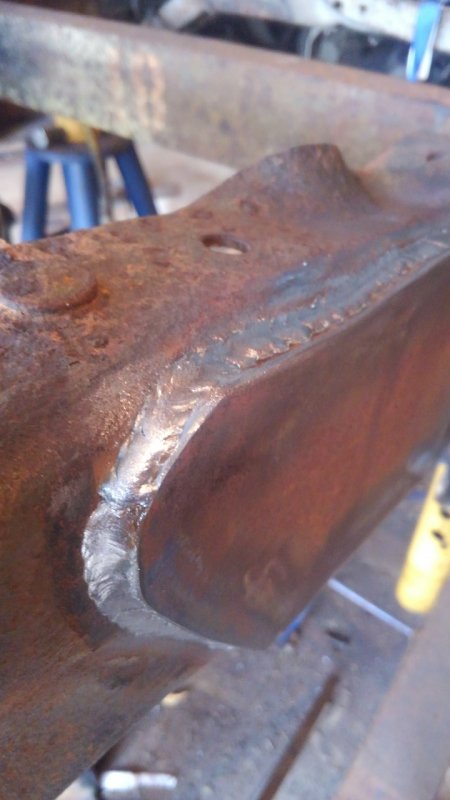 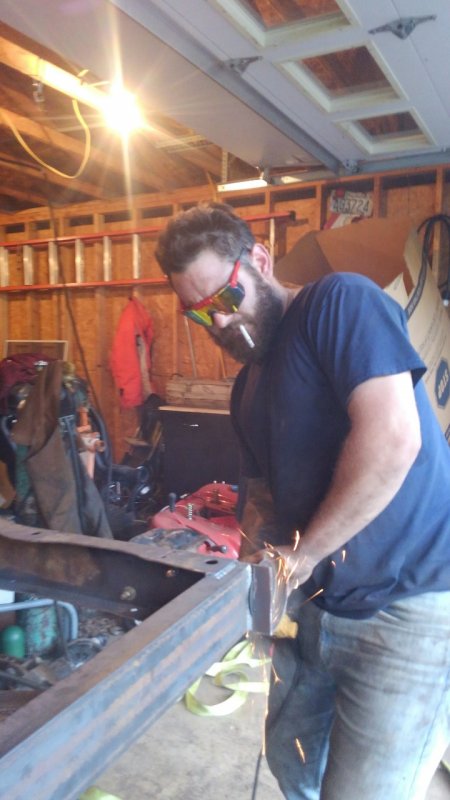 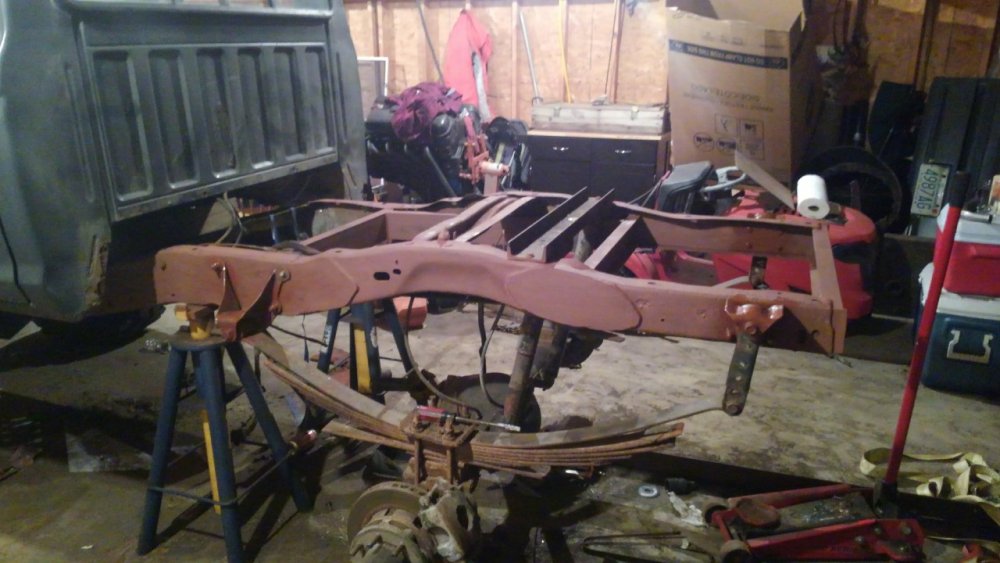 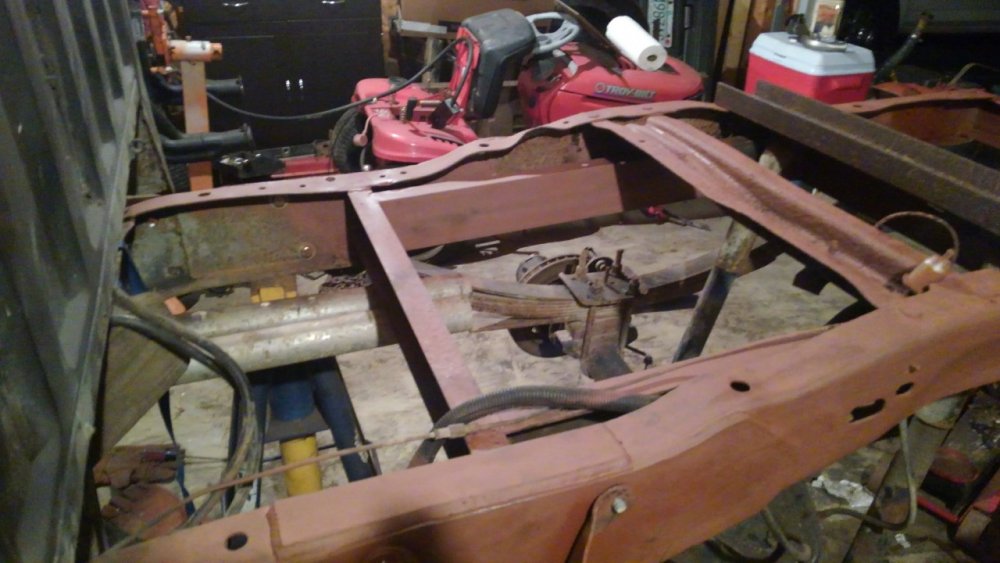 So with how I did the frame reinforcement, I needed to move the gas tank. Spent a lot of time going back and forth with this, found an alum boat tank on FB marketplace for $10, and installed a Carter P4070 fuel pump next to the tank. 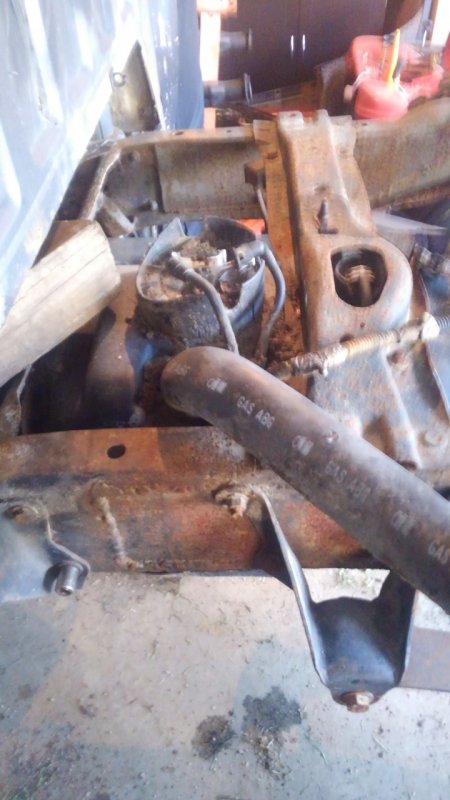 $10 tank, even has a fuel gauge sender 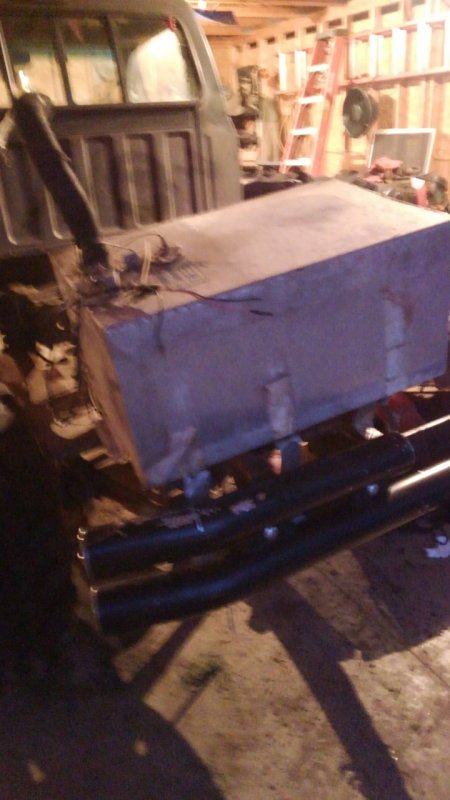 Neat tech tip, need to install fittings on those awful nylon fuel lines? Brake line flare tool, and a caulking gun make quick work of it. Adapted to rubber to go to the tank. 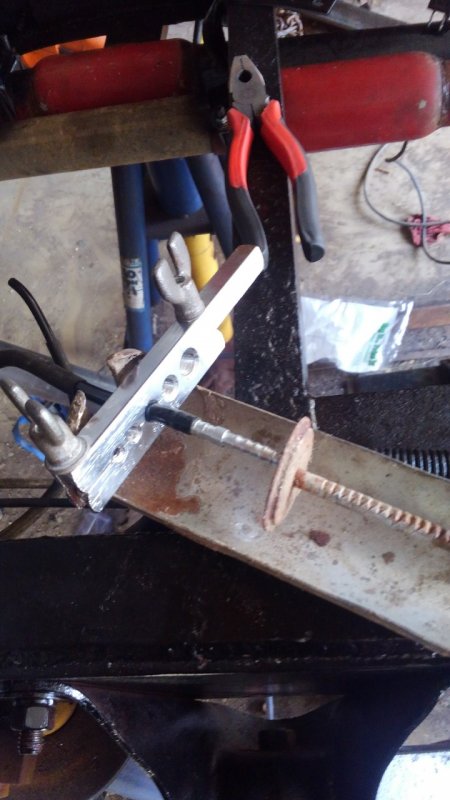 Bed on, ass pic, and outside again. 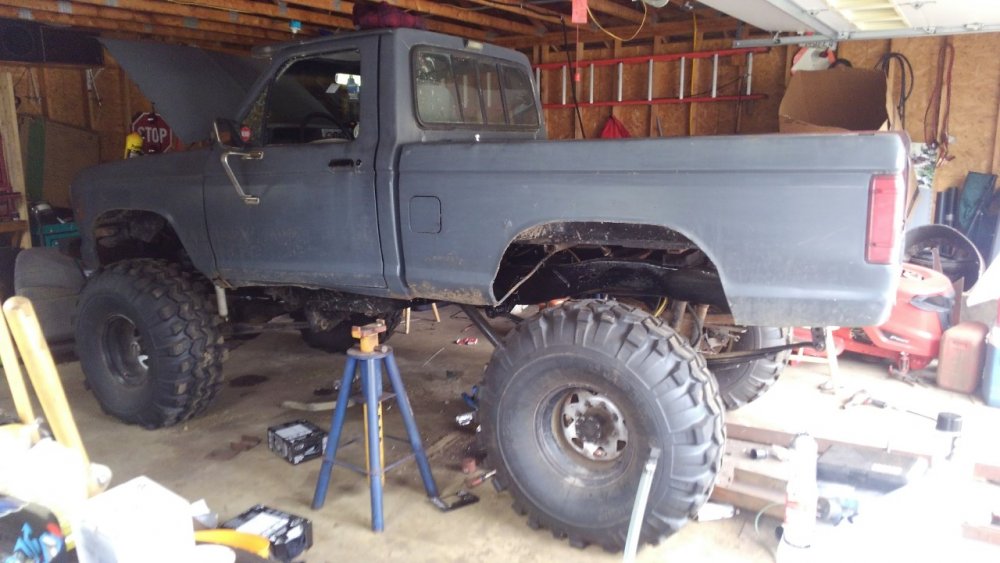 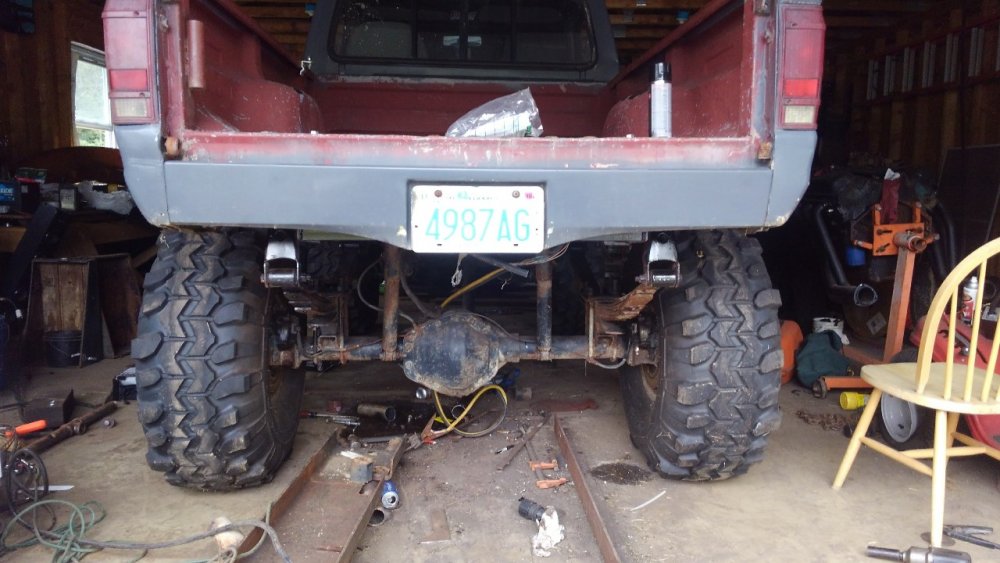 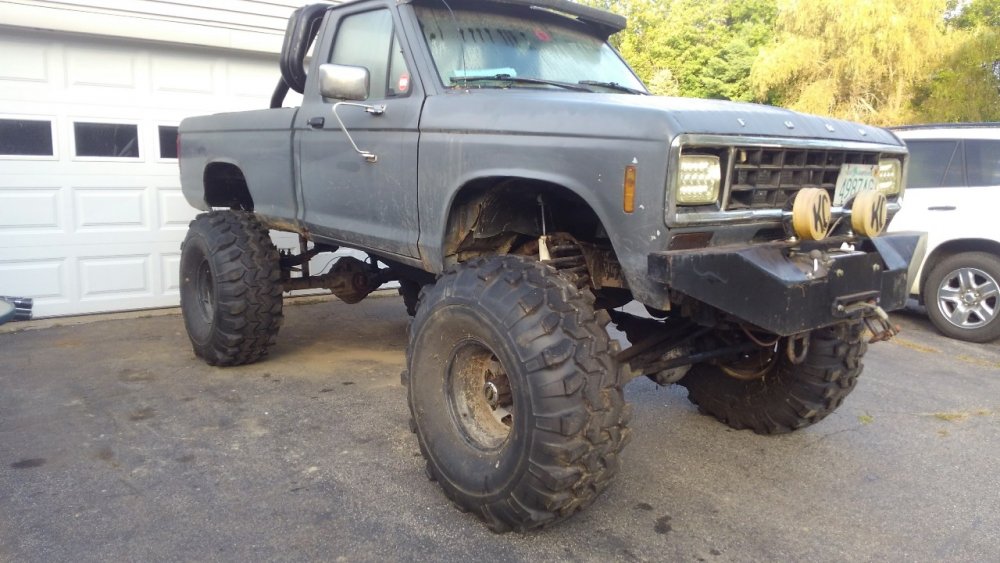 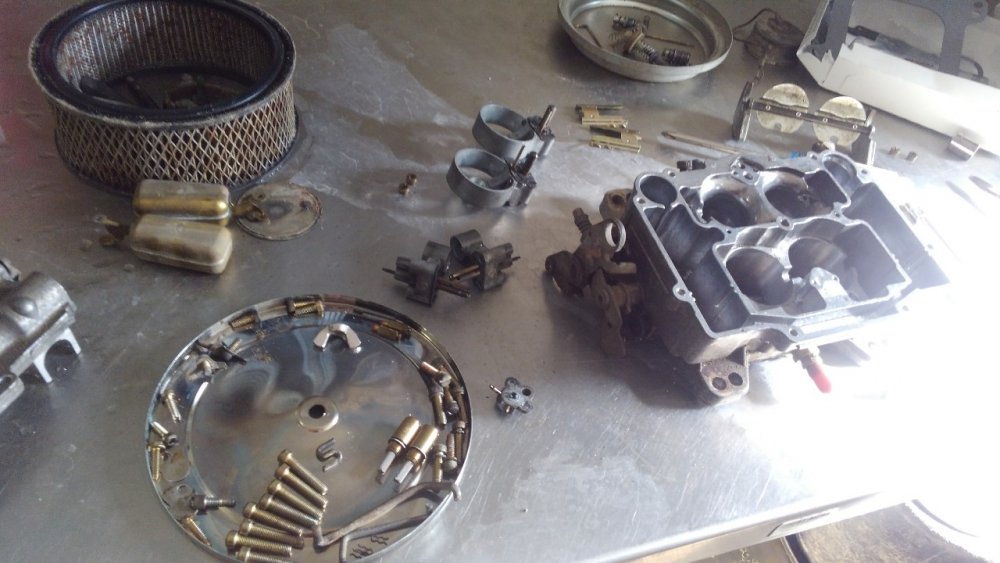 I'll take some pics of the bed when I get home. Fuel tank is up against the cab, fuel pump on one side, and battery relocated to the bed on the other side to gain some room under the hood. Spent a ton of time fixing some rushed wiring that was done years ago, got to clean up the interior some more, swapped out the bench I had stuffed in for the original rally buckets, going to make a center console, and mount the dual band radio I got in it.

Should be a few more weeks of puttering around while I play catch up on the other stuff I ignored while hammering down on this again. and it'll be ready for a shakedown.
Last edited: Sep 17, 2019

Thanks for the fuel line tip.

Yeah, great fuel line tip. Reminds me that I need to redo mine. FWIW you can buy AN quick connect fittings (for those of us running EFI) and use steel brake line for fuel lines instead of that nylon stuff. We did it on our race truck and it has worked well.

awesome to see you update this bad dawgs status in the world....


when your hauling heavy, wrapping the frame is something to consider for patching. same or slightly less gauge..

obviously for this application.... anything is better then what ya had. fish plating and reducing right angles is key....

in my experience...ethanol fuel and alum boat tanks is the devil....i was fixing them quite a bit before i moved out of houghton lake....they get a plaque in there that loves to booger everything up.


i fit up a fat bastard tank as well....but a 34 gal plastic unit from a b series van. pretty good range and full use of bed.

Good to know Bobby, I'll have to keep an eye on that.

Was planning out an elaborate proposal, but due to time constraints I had to wing it. She said it made for the perfect picture because it's the only thing she'll ever be second for in my life, yup she's a keeper. 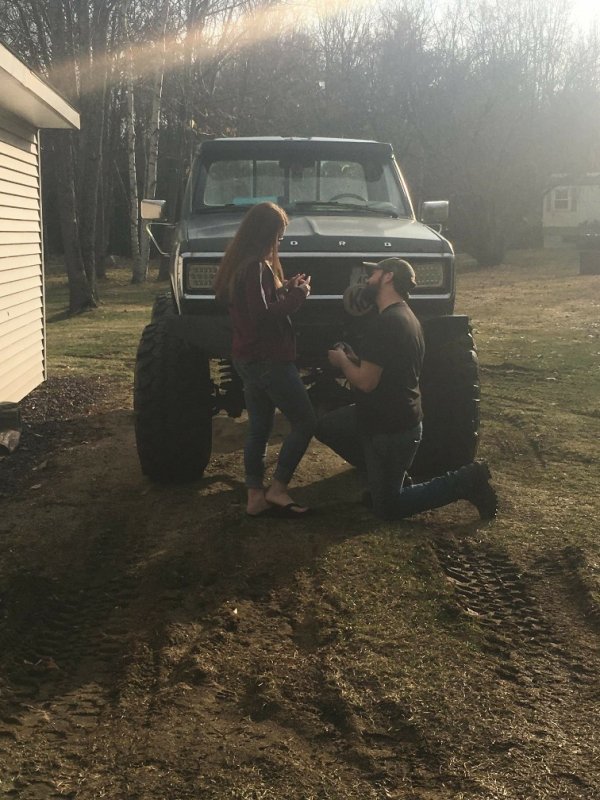 Fuel tank, battery box, and fuel pump in one pic. Made a piece of plate to mount the filler neck to. 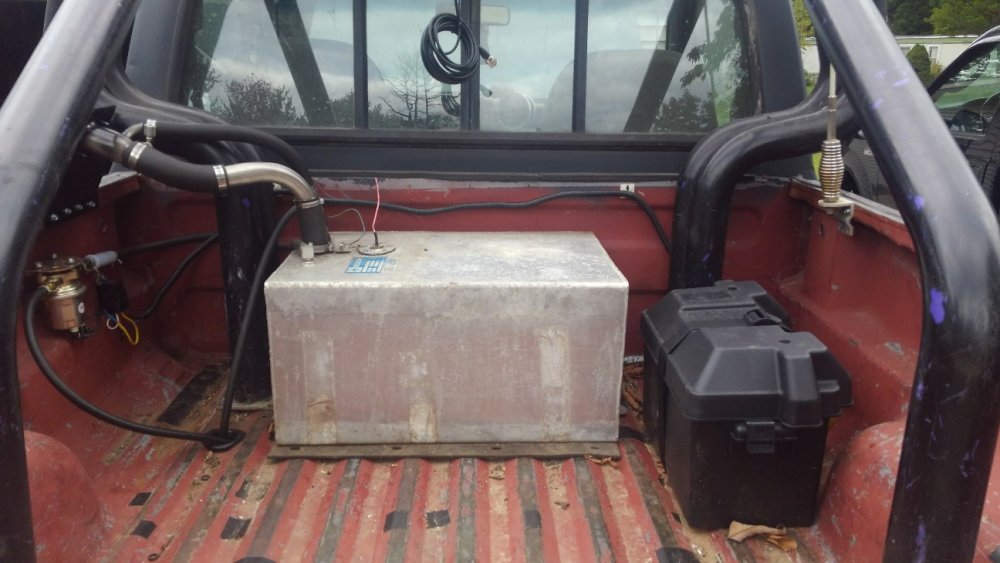 Thinking mount the toolbox at the back, and put my spare between the fuel tank and the tool box 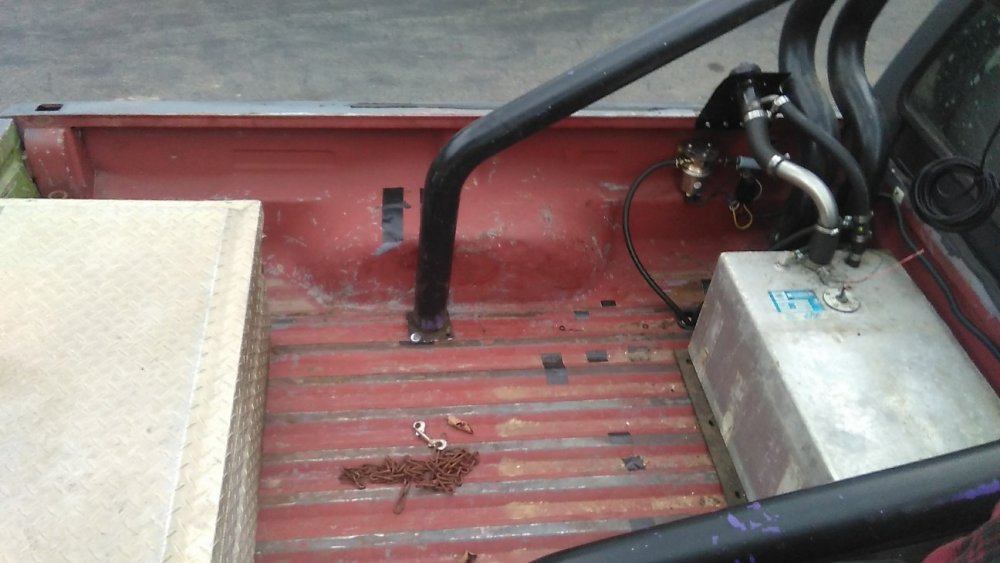