Had no idea you were going to the TRS trail ride too, cant wait to wheel with ya!

So I'm at a critical decision point...

I have an Eaton M90, M62, and M45 superchargers all on hand at the present moment.

The advantage of the M62 is I have all parts - intercooler, plumbing, etc. It's a modular design as well.

The advantage of the m90 is 28 cubic inches per rev.

Need some input on this one fellas!

id go with m62 until all the parts for the m90 could be gathered. by then you'll know of the motor is gonna

Ranger850 said:
id go with m62 until all the parts for the m90 could be gathered. by then you'll know of the motor is gonna

Other drawback of the M90, I'd have to fabricate most of the things. Good part is that I have access to a six axis CNC with 3D scanner, so it comes down to sizing. Not sure which is the better size.

i have no idea what you're talking about, honestley. i know 0% about how the parts you're talking about. i just have a basic understanding of how forced induction works. if the block can take it, I'd give it the strongest booster. you never mentioned putting the m45 on, why is that?

Ranger850 said:
i have no idea what you're talking about, honestley. i know 0% about how the parts you're talking about. i just have a basic understanding of how forced induction works. if the block can take it, I'd give it the strongest booster. you never mentioned putting the m45 on, why is that?
Click to expand...

Some of the Eaton superchargers (the M series) list their displacement in cubic inches per revolution. So, an M45 displaces 45 ci per revolution, a M62 at 62 ci, etc.

The M45 would have to be overdriven to the point of redline to produce enough cfms of air flow to work (AFAIK), and the m90 should work, but the margin of error is SLIM using it. Just a touch too much overdrive, and I'll probably push a head through my hood, or a rod through the block. Again, AFAIK.

Was hoping to get an expert to chime in, haha. Either is an option thanks to machineing options laying around. Just trying to double check my math, haha.

Can't remember if I posted this before, but a side by side comparison of my options. Salvaged these in one (very lucrative) day. 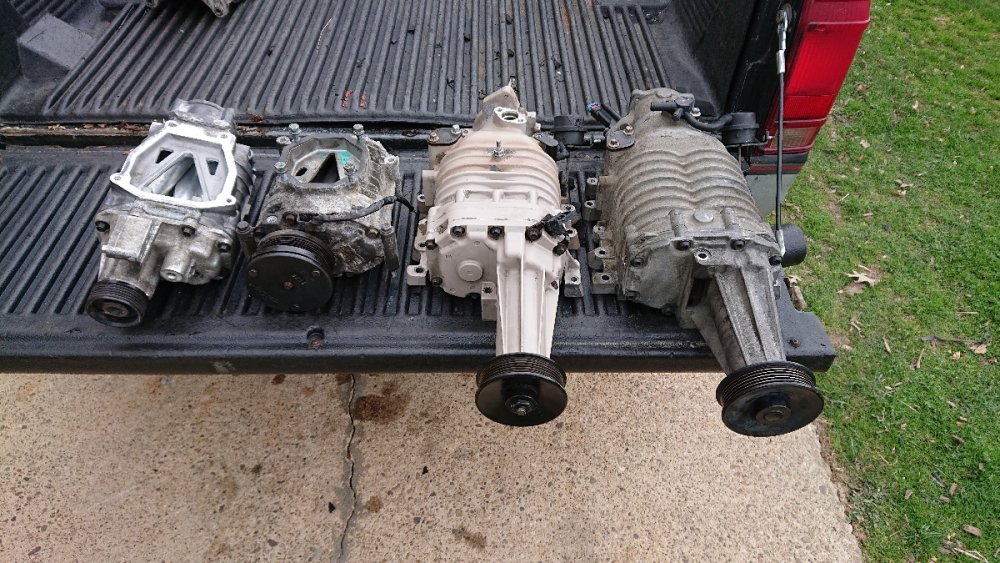 Being that you have a complete system with the M62... I would proceed with that. Reason... proof of concept. Probably more forgiving then the larger unit while you develop a working tune with all the new toys you've pieced together. If it will handle the M62 and it's worth going further go bigger... with all the knowledge you've gained.

Haha. See vid below for a Lightning with twin superchargers. It's a four part vid, the other three on on the right side bar. Guys out here in Oklahoma, I've seen and heard it personally. Awesome doesn't describe it.

PetroleumJunkie412 said:
From what I've read, they are a two lobe roots style, so when switched off, it doesn't seem to impede flow.

They were used in the Previa minivan on a Mad Max style controller. Guess it was for when you were late to soccer and needed to become the Road Warrior. [emoji23]

Sent from my H8314 using Tapatalk
Click to expand...

On the Lightning, which uses an Eaton M112 blower, if you pull off the supercharger belt, which is separate from the accessory drive, the truck will run and drive fine. What's funny is even idling, you can see the blower is turning without the belt by watching the upper pulley go round-and-round. It's a gutless slug, but you can drive it. For as long as you desire. Therefore, a clutch system might work.

You want everyone to know you have a blower, run cogs on it. The last two are my current set up with a Magnum Powers three idler pulley bridge. That tighter wrap around the upper pulley, made them so loud! They're a love or hate thing. Gt a lot of thumbs up, and a few windows rolled up! LOL The belt tensioner is a custom made manually adjustable model, no springs. Screw and locknut.

Putting a Magnum Powers blower on my Lightning next month. After that, I'll have an Eaton M112 taking up garage space. ;-)
Last edited: Jun 16, 2019

I think the M45 would be a little small for the 2.9l. The M62 or the M90 would be better, depending on how much boost you want to see.

Today, I noticed someone gave me inspiration to finish this build. 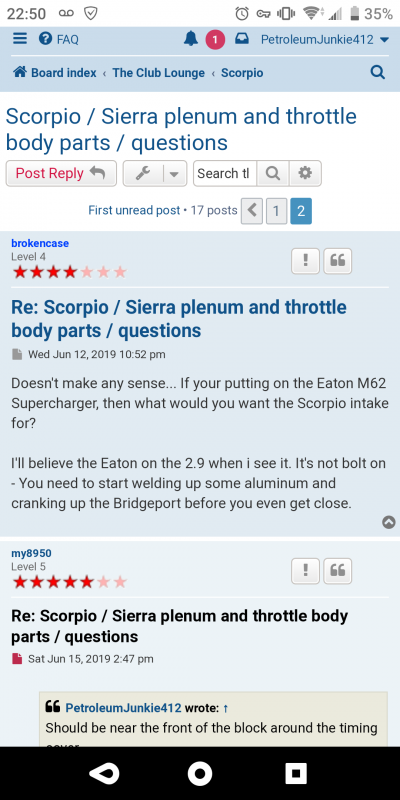 Well. Looks like I know who's yard I'm doing doughnuts in first.


"HUNGRY!? WELL GET OUT THE SPRINKLES CAUSE I BROUGHT THESE" (proceeds to turf some Merkur owners Kentucky blue grass and fescue 26 blend)
Last edited: Jun 16, 2019

Project is still chugging. Sorting out a lot of BS with the Merkur intake. Thanks to some die hard Merkur guys though, I may have rhe throttle linkage I'm missing.