As I understand it, a prerunner is a lifted 2 wheel drive. I don't understand lifting a 2wd or what it would be used for. I've spent my life in NH, no one buys a 2wd truck except for use as a delivery vehicle because they have no resale value here.

It's a desert racing thing. A prerunner is a truck that goes out and runs a race course before the professionals come in

by definition, a prerunner is used by race teams to pre - run a course. typically prerunners are about the same level of performance as the truck ( or buggy) they will be racing in with some creature comforts. they pre run the desert course to mark hazards, fast sections, and pits on their gps systems.
it is NOT a lifted truck. it is a truck with lots of suspension travel and good drivetrain components to help it haul ass across the desert.
ca, az, nevada, and mexico deserts are, im sure, nothing like the type of off roading you have in NH.
if youre like me, and arent part of a race team, we use our prerunners for chasing and watching races, long point to point desert camping trips, or just good ole fun haulin ass in the desert.

heres a visual representation
the first half of the video is the teams race truck, at about 2 mins the f150 prerunner comes on camera. as you can see, compared to the race truck, it has windows and other normal truck features.
every vehicle in the following video is 2wd

Like 412 said, they "pre-run" the course before their desert truck races it. Sometimes also off course, to go ahead to set up the next pit, or be "chase trucks", which follows behind the race truck with extra parts,fuel,tools etc... I will further divulge....

These trucks are purpose built (like rock crawlers, mud trucks etc)...Built for high speeds through mostly open desert terrain. The difference from the race truck being they are also loaded with spare parts,tools,fuel, tow straps, tires etc...to support not only itself, but also the race truck. So they are usually less capable than the race truck, but much more useful.
During prerunning, they will note stuff like any blind or gnarly sections (huge ruts, hidden boulders, etc), and sometimes plot the course itself to avoid any missed or wrong turns, and find the best line.

Its like how racers get to practice laps, except its a 1000 mile lap lol

common platform:
-long travel suspension, like 8" to 2 feet!(usually most of the truck is hacked up and every inch utilized for suspension, but pre-runners may compromise to save bed space for payload, or have toolboxes and racks instead of shower towers
-lots of lighting
-cooling upgrades, like a huge radiator in the bed (desert is brutal and hot!). and of course engine mods of various degree.
-usually fiberglass bodywork, and flared or bulged fenders/bedsides to swallow up all that tire and suspension. These trucks are wide and low for stability, and all about "downtravel".
-And the infamous pre runner bumper. These are made to help keep the front end smooth over impacts (and hold lights), and make great bushwackers!


If you want a chub, check out Terrible Herbst's trucks.

They can be 2wd or 4wd, although the prerunners are usually 4x4, because they may have to venture off course, or pull out a stuck (or inverted) race truck that did....

The top class is called trophy trucks...the buggys are up there too. Then there's various classes below it down to basically stock vehicle class. Motorcycles and now UTV's have their own categories as well.

I am far from it being an actual respectable pre runner, because its still mostly stock...But the things I can and plan to do are pre runner based. In my opinion, pre runners are more badass than the race trucks, because the race trucks need support, pre runners are the support. Im going for overlander/prerunner hybrid, something minimally hacked up, that I can hit the desert in solo in with relative confidence, yet be capable enough to have some fun.

Sorry if that was long winded, pre runners are awesome.

Our offroad racing scene involves many 2wd vehicles, including a lot of Rangers, and some full size TTB/TIB trucks but almost all of those seem to be 4x4. A lot of the 2wd guys do very well, the old Belair pictured below is 2wd and not many can compete with him - VERY fast car. I raced an '81 F150 short box 4x4 in the stock class, no way would I have run a 2wd truck... or a VW, for that matter (there is also a 1600 class for the Volkswagon guys.)

What Eddo said is spot on, I would only add that the stinger bumpers also serve to keep a vehicle from flipping over in some cases... you nose dive but the stinger angle keeps you from going any further. 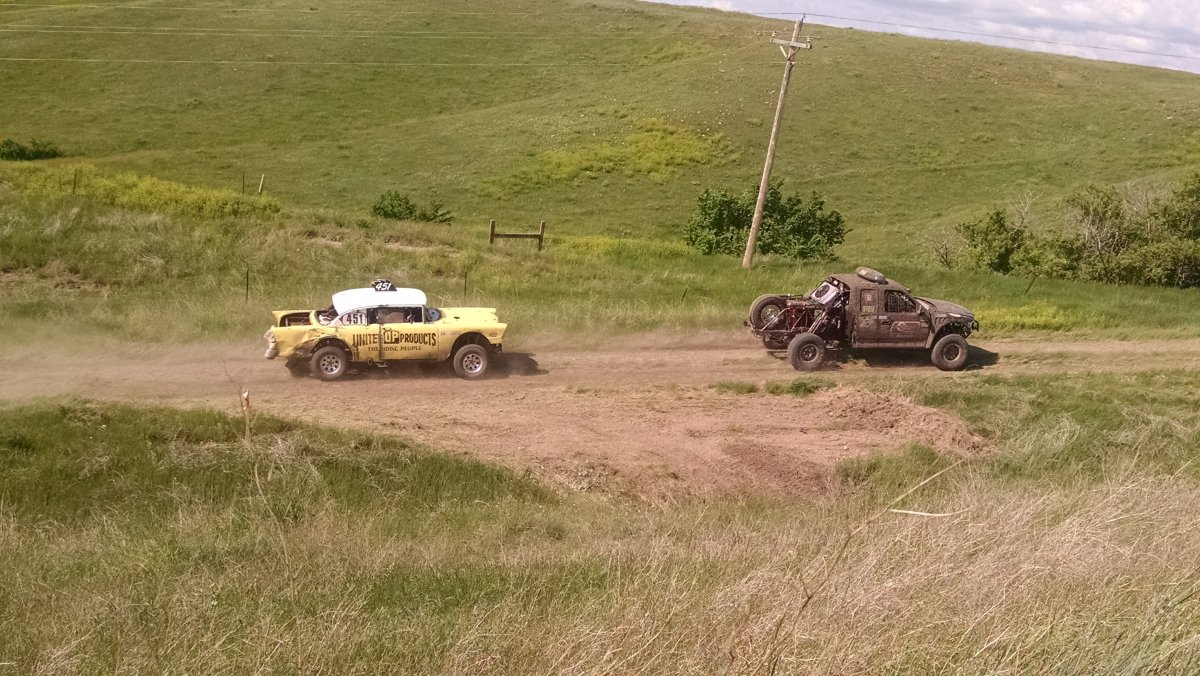 Lets not forget what @19Walt93 is really asking. Why are people who do not race wanting to build a "pre-runner". My answer is a simple one. They couldn't get a real 4wd truck, so they make their 2wd drive look like a 4wd off-road truck and then they say "it's a pre-runner"

A "prerunner" is a vehicle that's much cheaper to repair than the full "off-road race" vehicle so its used to run an off-road race course prior to the more expensive vehicle being used
Usually similar wheel base and height, but not the same power or long travel suspension which are some of the more expensive parts, lol
Depends on how much the Racing Team has to spend
Can be 2WD or 4x4 but 2WD are cheaper to repair, so 2WD usually

"prerunner" for non-racers is a type of vehicle trim, like options package, pick what you like
Last edited: May 27, 2020

Toyota had/has a "Pre-Runner" trim/package and Nissan has the "Desert Runner" pre-runner option as well.

Ranger850 said:
Lets not forget what @19Walt93 is really asking. Why are people who do not race wanting to build a "pre-runner". My answer is a simple one. They couldn't get a real 4wd truck, so they make their 2wd drive look like a 4wd off-road truck and then they say "it's a pre-runner"
Click to expand...

Couldnt be any further from the truth. i dont race, just love being in the desert. probably could have had 14 4wd rangers for what i have into my 2wd. never once have i needed 4x4 lol

You only needed a 4WD if you weren't going FAST ENOUGH, sissy

JOLENE_THE_RANGER said:
Couldnt be any further from the truth. i dont race, just love being in the desert. probably could have had 14 4wd rangers for what i have into my 2wd. never once have i needed 4x4 lol
Click to expand...

In NH you're a lot more likely to find mud or snow than a desert. I understand what it is now, it's just not a New England thing. Steep hill + slimy mud with water running through it + 2wd = bad day.

I always thought the "Trail Head" package was Fords answer to the prerunner packages offered by other companies.

I think we had a Prerunner package on Rangers long ago, it had the spare tire mounted on a frame in the box making it useless. We sold one. I'm pretty sure it was a 4x4, though.
Last edited: May 27, 2020

@JOLENE_THE_RANGER. Forgive me. I wasnt talking about the REAL pre runners that really do it ( like you and your people ) I'm talking about the other ones. The ones that post " how do I lift my 2wd TIB Ranger" and they live in Florida backwoods. Let me just tell you that there is not much "rerunning" around here.

You only needed a 4WD if you weren't going FAST ENOUGH, sissy
Click to expand...