Not asking for help here, just telling the story. Doubt anyone would remember the issues I've had with my engine over the years, I post so little it's amazing that the site even remembers me.

So the truck in question here is a 1999 Ranger 4.0L Auto 4x4. Truck was purchased with somewhere around 90K miles and currently sits a bit over 200K miles.

Shortly after I purchased my truck in 2005 the head gaskets went the first time. Chalked that up to neglect by previous owners. Short time after replacing them they went again. That's when I learned about the head cracking issues that have plagued the Cologne series engines, amazingly never had a problem with our 2.8 and 2.9L engines. Turned out both heads were cracked, so replaced head gaskets and installed a pair of brand new heads. Truck does great...

for about two years.

Was daily driving the truck always kept fluids in good condition, never let coolant run low or overheat. Over time the truck starts acting like it has a misfire. Symptom gets worse and worse until I'm not willing to drive it and risk damage, but no codes and nothing we try fixes it. End up finding head gasket has eroded between a cylinder and water jacket. We assumed we made a mistake and replaced head gaskets again.

About two years later it happens again. This time we take the heads in to be inspected. No problems found. New gaskets again. Cycle repeats, until I buy my car and retire the truck as a daily. Even then somewhere between 15-25K miles it repeats. I even bought a brand new one torque wrench and borrowed a known good torque wrench (get's calibrated every few months) during all of this to rule those out as an issue.

Last time we "fixed" it was probably 2016. This time tired of the issues and having time and place to do the work, we pulled the engine took it down to bare block and had everything checked by a good local engine machine shop, a different one from who checked heads in the past. Everything was good. So new ring and bearings, and engine went back together and back in the truck again.

Well by October 2017 the problems were returning. Same symptoms as every other time head gaskets went, but this time it was also throwing in intermittent low oil pressure. So by this point I'm fed up with the truck, tired of sinking money into it, and completely done with that engine. Attempted a few things to fix the oil pressure, but nothing really helped. So I threw a bottle of leak fix in the radiator, and a bottle of motor honey in the oil and proceeded to drive it when needed through the end of the year/end of hunting season. Zero shits given, if the engine blows oh well.

So 2018 I've got a decision to make. Either try to fix the ranger again, or work on something I really want to work on. Well I was fed up with the ranger, and there was a truck in dad's back yard that I wanted to get for years. So June of 2018 I dug a 68 F-100 4x4 out of the weeds it had been sitting in for 12 years and proceeded to put it back on the road. Got a long way to go still on that truck, but it was definitely the right choice.

Fast forward to recent months and the F-100 is mostly going great, but some items like a brake booster are hard to come by and can take months to get a replacement (backorder for 2 months now). While I'm happy with the progress and am driving the truck as much as I can, it's not yet a reliable or very usable vehicle. F-100 body parts physically won't fit in my Kia Forte and I think the intake on the 390 FE probably exceeds the car's payload capacity. So until the F-100 is closer done I'm kinda in a position of needing another running and reliable truck even if it is just for hauling parts.

I was very hesitant to spend even more money on the 99 Ranger, but it was either new engine or buy yet another cheap used truck. Fixing what I had seemed to be the more logical option than buying some else's problems again. So instead I'm doing both. Tomorrow I'm picking up a $500 parts truck a co-worker told me abut (his neighbor). Truck only has 140K miles and supposedly had a new engine installed about a month before his wife wrecked it last year. Front end colission, but was driven home and to where it is parked. He was going to fix it himself, but a large tree branch fell across the cowl/hood during a storm earlier this year and now he wants it gone. New engine or not, it's got a lot less miles and was running good according to the coworker that I trust.

Right now I'm almost feeling bad about changing engines. My Ranger has sat in the same spot basically untouched since at least June 2018. I threw a new battery in it today and it fired up first try and ran good. I almost feel bad about changing engines, but I also know it's the right thing to do and is the only way I'll ever trust it again. So over the next few weeks or month, this engine and other good parts will be getting dropped into my truck. With any luck it'll prove reliable again and be in the inventory a lot longer.

Sorry about the long winded post, hopefully it'll drop off the first page and be forgotten quickly. Like I said not asking for help here, just needed to say this stuff somewhere that other people who might understand what I've gone through with this thing and why I'm still going. At this point it either goes well and lasts a long time, or it's over. By over I mean there might not be enough left for the scrap metal recycler to take.

Good, glad to here u haven’t given up just yet! U know, I didn’t get half way through reading and was thinking why the hell didn’t he just scrap that motor and replace with a used one?Lol

Take your pick. I really should have given up on that engine years ago.

Until now replacing it with a used engine wasn't really considered an option. Even now if it weren't for the supposed history of this truck I wouldn't be considering a used engine. Might have done a reman, but wasn't willing to spend the money on it when there shouldn't be anything wrong with the engine in the truck. If this parts truck hadn't happened to be in the right place at the right time, I'd be getting ready to do a reman instead.

Dude, I feel for you. For what it's worth, I think that you're doing the right thing, in putting in a different engine. Good luck!


i wont rebuild-rehead these fawkers unless the block work is done at a specific place by specific people....who have rejected literally 14 of 15 blocks in the past.


it is why ls engines were invented.

Your block is junk. I would have replaced it after the first set of head gaskets with the new heads went.

I may have replaced it the first time, based on my own inspection of the block's deck and the water jackets. Even a lot of good machinists don't understand how very little degradation around one of those ports is needed for repeated head gasket issues.

I agree with Bobby and adsm08 - I won't trust a Cologne after one set of heads. I kept my 2.9 going because it made it 260k miles on its first set, and the only reason I changed heads was a broken exhaust manifold mounting ear.

Your current block is catapult ammo. Drop something fun back in its place.

PetroleumJunkie412 said:
Your current block is catapult ammo. Drop something fun back in its place.
Click to expand...

Wait. Nope. Don't use that one. Bad idea. Waste of time. Find something else.

5.0 swap time, there is a reason why ford used it for 30+ years. Well worth the money. Even a stock build would be worth it considering the reliability of those engines.

Looking back i wish i would have just bought a damn crate engine for it when the head gaskets went. But it only had 70,000 miles on it and i thought....eh itll be fine.

At 80,000 i had a new crank, main/rod bearings, timing chain, oil pump, basically everything but the rings changed (cylinder walls still looked new).

Now at 105,000 its been pretty trouble free, other then a cracked exhaust manifold.

For the money ive spent i coulda bought a quallity remanned and been done.

Good luck with it.

LS swaps are fairly cheap anymore. A guy at work does LS swaps on just about anything. He did a LS swap on a 50's truck and said he had less than 2k in it and it is pretty much a corvette with a truck body on it at this point. Point it there is much better stuff to spend money on than a motor that's got issues. Nothing wrong with a 3.0 either. Mine has been damn reliable now that I got the stupid crap fixed from the previous owners neglect. You can probably get a 3.0 with trans for less than $500 too.

91stranger said:
LS swaps are fairly cheap anymore. A guy at work does LS swaps on just about anything. He did a LS swap on a 50's truck and said he had less than 2k in it and it is pretty much a corvette with a truck body on it at this point. Point it there is much better stuff to spend money on than a motor that's got issues. Nothing wrong with a 3.0 either. Mine has been damn reliable now that I got the stupid crap fixed from the previous owners neglect. You can probably get a 3.0 with trans for less than $500 too.
Click to expand... 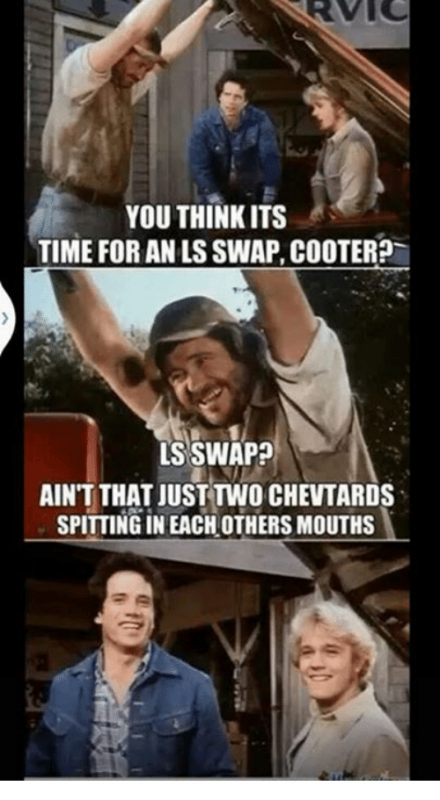 
Finding a solid running 4.0 is easier. Usually the same price as gaskets.


You know you want to.


Finding a solid running 4.0 is easier. Usually the same price as gaskets.