I recently traded a grand Cherokee for a new-to-me "88" ranger. I say "88" because the body is titled as an 88 but the motor appears to be a carbureted 2.8l with a motocraft 2150 from I'm guessing an 83-84. It is a 5 speed 4x4 though I'm unsure what transmission it has at the moment. My problem is that 1st-3rd seem to have plenty of power throughout the band, but once I hit fourth it bogs down heavy, same in fifth. It will eventually fight its way up to speed. I've changed the plugs, and air filter and that's about it so far. Anyone have a good source for figuring out where these vacuum hoses go?

Look at the distributor. Do you have a vacuum advance unit on it with a vacuum line? If you do not, then you still have the original TFi distributor with the rectangle module correct? If you still have the original TFI distributor, then you have a mess on your hands and you most likley need to convert it over. The carb if its original will also have a bunch of wires coming off of it. If it has been replaced it should have only one wire at the most coming from the choke.

The original 2.8 was computer controlled. It ran great when new, but now parts and troubleshooting that system are very difficult. You can change out the carb and the distributor for a older model and get it running much better. But the old school distributors for the 2.8 are getting hard to find now.

Hopefully someone has already swapped some of that computer stuff off of it.

I will look into those things when the rain lets up enough to let me pull her back in the barn! Thanks for the tips, been scratching my head on this one. A lot of the wires are gutted, I'll try to get a few pictures of the engine while I'm out there.

I'm not seeing a bunch of wires on the carb, and I'm not sure I see a vacuum advance on the distributor. What do you mean by "convert it over"? Like a duraspark conversion?

Epimetheus said:
I'm not seeing a bunch of wires on the carb, and I'm not sure I see a vacuum advance on the distributor. What do you mean by "convert it over"? Like a duraspark conversion?
Click to expand...

Yes, a duraspark conversion. You still have the computer controlled distributor on it, I can see the TFI module sticking out from it in the photo you posted. Problem is, you will have to hunt for a conversion distributor, they used to sell them rebuilt but the source for those has dried up. You basically want to convert your engine over to a 1978 mustang II 2.8 or a late 70's pinto with a 2.8. You can get a cheap knock-off 2100 carb off Amazon for around $100. When you are done you will have a simple ignition system with a simple normal carb.

Oh awesome, so way more work than was mentioned by the previous owner

and chance you know a part number for the distributor I'd need? What all would I need for the conversion?

Here's a cardone reman distributor. I haven't had very good luck with them, but they are the only game in town. Their supply has dried up if you go to the local store but you can check to make sure. 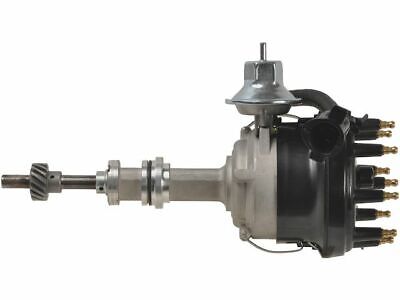 What's the typical problems with them?

Then you need a duraspark II ignition box or you can use a GM HEI module.

Epimetheus said:
What's the typical problems with them?
Click to expand...

They clean them up on the outside, but don't do anything on the inside and call them "rebuilt". They don't replace the pickup modules, the bushing can be worn out, etc. It's a crap shoot.

Any chance you have a source for an in depth guide to the conversion?

franklin2 said:
Here's a cardone reman distributor. I haven't had very good luck with them, but they are the only game in town. Their supply has dried up if you go to the local store but you can check to make sure.

When I followed that link it says its for a 5.0 mustang, is that the right part for this conversion? Trying to get a parts list together for ordering