Hey everyone, I'm beginning to dig into my truck a lot more, so I'm making this thread to keep it up to date. It is a 2004 Ranger, more details in my intro thread

My most recent escapade with it was a seized wheel bearing, linked here.
To update the wheel bearing thread, it is done. I grabbed a spindle for a 10inch rotor the first time, grabbed a b3000 one because it looked like it would work (upper ball joint stud was 1/16" different), drove another town over since they had no more in that lot, and finally got one that would fit (free speed sensor too!) Put it all together, new rotor and pads, new bearings and seal, and a new tie rod end because I tore the boot during one of the removals.

I took it into Firestone and got some new highway tires, lifetime alignment, and inspection. I had set the tie rod by sight and got it within spec, but they got it to zero out on the print, so I'm happy with it. I intend to hunt down the ticking/bearing sound which I fear is inside the valve-train somewhere, but time will tell. My highest priority at this point though is figuring out my fuel issue. I prime the pump 5 times and go to start, no problems. No priming = no start for 20+seconds (I have not done longer), I bought a pressure test so that's on the list today. I'll probably post in a help subforum about it and link it into this post at a later time.


Okay the list of things to do as of right now is:
Cosmetic and Auxiliary upgrades to do list:

Check the cam position sensor for the ticking issue. They are somewhat a known issue in the 3.0's. They are driven by the oil pump and wear out because of lack of oiling and bad bushings. Fuel issue sounds like a leaking injector or a failing pump.

Yeah During fuel testing today It sounds like the back side of the engine for the tick, but it only happens under no/light load, i'll never hear it walking up even to 5500rpm, only when it comes back down. Cam sensor is easier than rockers, and I already bought one so I'll put that in and see how it sounds after, but i'm not hopeful.

The fuel pressure test was helpful, I tested at the rail port. started at 0psi (not empty lines just no pressure) and first key on got it up to... 5psi. It sounded like it ran for only 1 second, not 2. Obviously an issue, but it was peculiar. The first time I kept priming it until I got to 55psi, then it maintained 55psi while running and after. I bled the line, reprimed it to 37psi, started, and it held at 37psi even at 4Krpm, and held 37psi after 15minutes off. It drives fine, but it feels like its limited somehow. I've replaced the filter and there isn't much left between the tank and rail, so pump is going to be replaced and I'm assuming no more issues fuel wise after that.

Imagine my surprise, when I am loading groceries into the back seat, when I find my ranger is actually a 4 door, not a 2 door. Well, sorta. I have 4 doors, but the rear doors won't unlatch on the bottom. My guess is something wrong with the latch itself (rust) or the linkage has failed somewhere inside the door. I work today until midnight, but tomorrow I plan on getting at least one of the rear doors free.

Okay, been a little while since my last update. As I had said, I got one of the rear doors free a while back. I took the inside panel off, looked down in there, and my cable holders were okay. In fact, I could see the latch working perfectly fine. I figured it was rusted on, and a quick shove with a pry bar got it free. I used PB blaster, then put some grease in it. Works great.

I was hesitant to pry on the other door without actually making sure the latch simply rusted. But I decided to do it anyway, and it did open up fairly easily. So now I'm back to a 4 door.

I picked up a tool box for the bed of my truck from a coworker who used to have a ranger. $20, could NOT pass that up. I have never had a truck box of my own, but I have seen plenty. One thing that bothers me, especially with a small bed, is making it smaller by putting in a box.

In an effort to avoid this, I decided to leave enough room below the box to slide up to a 12" item under it. The design of the box didn't quite fit my truck, perhaps he had an early 90s, or no sidestep. This worked to my advantage, as I raised the box up on two 20" long pieces of 2X8" treated wood per side. These blocks are bolted into the nearest T-30 bolt hole on the top of the bed, so one bolt per side. Underneath these two pieces of wood, I used a 5" wide piece (a little imprecise cut for tightness) to help reduce sideways stress. The box itself is mounted with four 3.5" screws, 2 per side, into the wood blocks. I'll take pictures of how I put it together because only the 4 box bolts are visible heh.

This design allowed a clearance of 13.5 inches, and takes only six bolts to remove entirely. Since I got a bolt with the same thread as the T-30, I can also return those and it will be OE again. It blocks a lot of the rear view, but you can still see traffic. Will need a rear camera for parking. The box doesn't overhang far, but with it so high up, It kinda peeks out at you.

I also put in a Kenwood radio, a DDX376BT model. It has a rear camera hookup, and a physical volume knob. It is recessed about 5/8" to far in the dash, but I still like it. I intend to do a sub box and platform behind the driver seat, plus upgrading the front door speakers at some point.

Hey everyone, I added (and removed!) a few things from my ranger. I am doing a 12 hour total drive this weekend to see family, and decided the ranger's first true test would be this trip. I like listening to music while driving, so obviously the factory stuff won't work, as seen with the head unit. I bought some door speakers from crutchfield, but forgot the holiday so they won't get here in time.

After searching craigslist, I found a 500RMS amp and 12" sub, with enclosure, for $120. I liked the enclosure because it was only 13.2" wide. This allows me to put the seat all the way back, and still recline further than is comfortable for driving. I need to get a stable base made for it, I intend to do a short shelf all the way to the seat so I can store a blanket underneath it, with the sub on top.

I had to remove the jump seat to get it to fit properly, and I never intend to let people ride in the back so not a biggie (I did leave the other one jusssst in case) so I took some pictures of the mounting holes in case anyone wants to see (I also used one of the bolts as the grounding point for the amp) In hindsight the wires should have been ran behind the box so as to avoid going "up" before going "down" but I am very happy that the only wires visible are the ones on top of the sub.

Another quick update, I got my door speakers in, MUCH better sound quality on the higher frequencies. I purchased Kicker CSC68, with 75RMS capacity. Running them from the head unit amp so they only get 22RMS. Maybe with a set of components in the front, these will go to the rear, and then amp all the door speakers. But for now this is working great, so no more audio upgrades. I bought them from Crutchfield, they sent a personalized thank you (by an actual person), so they get my carAV business from now on. They also sent me wiring harnesses, so it was plug and play (literally lol)

What did I do to my ranger today? WHAT DID I DO??? Well, I finished putting some running boards on! I snagged these factory boards from someone in Middle Of Nowhere, NE, for a total of $20. They had no front hardware, but I knew if it came to it I could figure it out. Plus, it was $20, and I wanted running boards.

So Yesterday I got them mounted up, rear brackets mounted just fine, as if they belonged there. The front... not so much. The front of the running board had two slots in it, one lined up with a bolt hole that was obvious, the other lined up with a large, slightly oblong (1"3/8" X 1"1/8") hole. 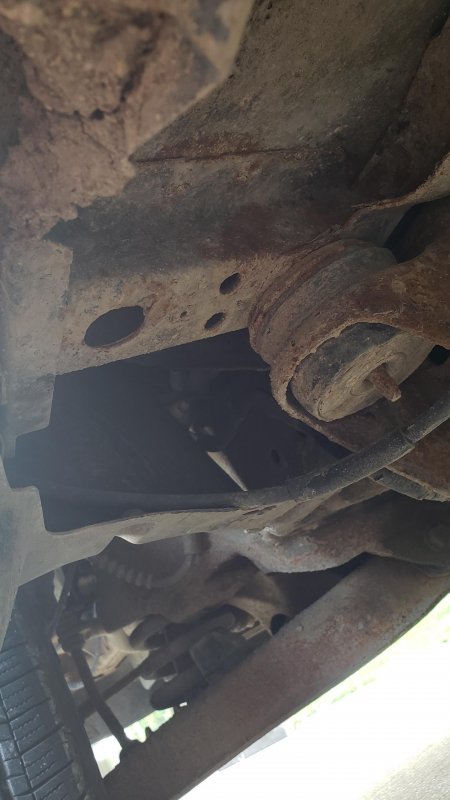 I decided that a blind nut type situation would work best, and got a hold of some toggle wings that would do the job. I bought the largest they had, 1/2", also the width of the slots on the board's front bracket. Well this was a slight mistake, as the threading on the bolt made contact with the slots. A quick grind-down job, they fit! 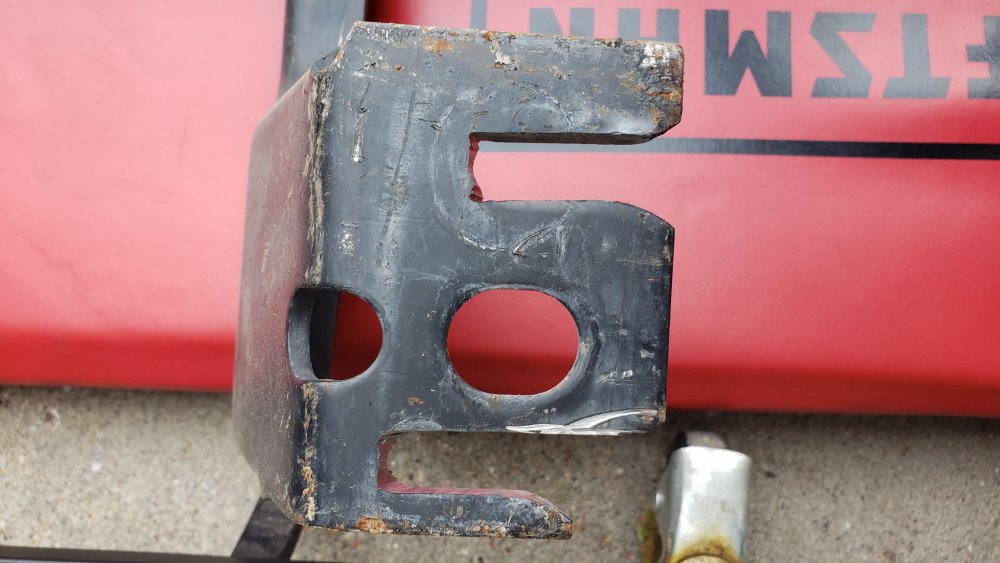 I had to also cut the toggle wings, as one side was way to long to fit properly, and the other was just barely interfering with the second bolt. It was a bit cramped, but a slight sideways angle got the wing inside. Once the hardware was hanging down, the boards went on just fine with no issues. 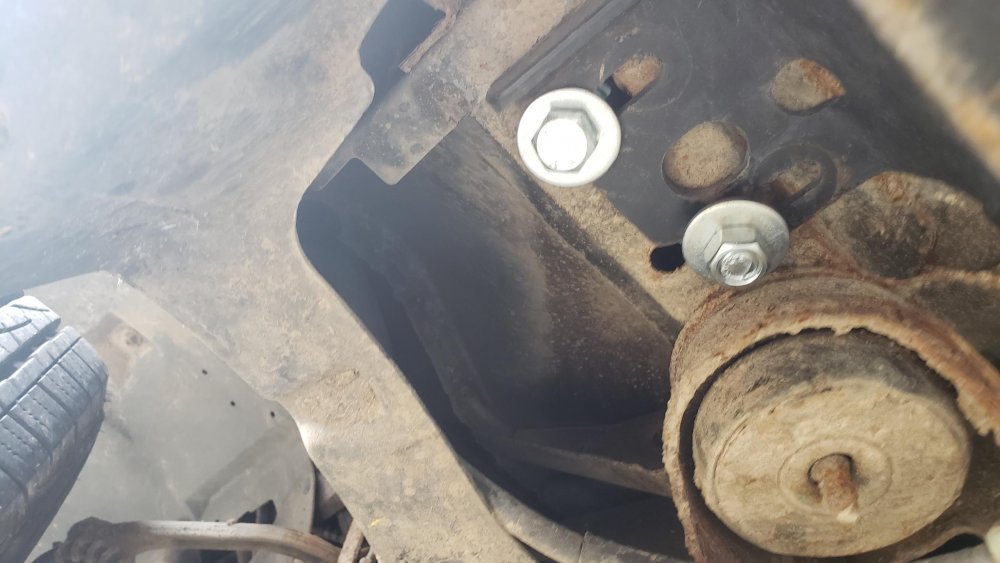 I stood full weight (165Lb~) on the front, rear, and middle of both sides, no flexing. I do not actually intend to use them as steps, they are cosmetic in my opinion, but if they are in a place to be stood on, they will have support to handle it. I've included extra photos in case anyone else wants to see more in depth.

Hello everybody! I finally got around to painting the wood spacers for my toolbox, and decided I'd show how I mounted them on the truck. I wanted to keep from drilling holes in the bed, as I may want to remove the box at some point. I also didn't want to put more holes in the actual toolbox than I had to, I kept it to four holes total. The bottom board is screwed into the middle board, and the top board is "screwed through" from the inside of the box to the middle board. I can't really explain how I put it together, so I took some extra photos to really show how it mounts.