Hey everyone! This is my 1997 Ranger XL with the 3.0, 5 speed manual and 4wd, and a 7' bed. This truck is my daily driver, so this isn't going to be so much of a build thread per se, but I will be doing some light modifications and thought it might be cool to document my process! 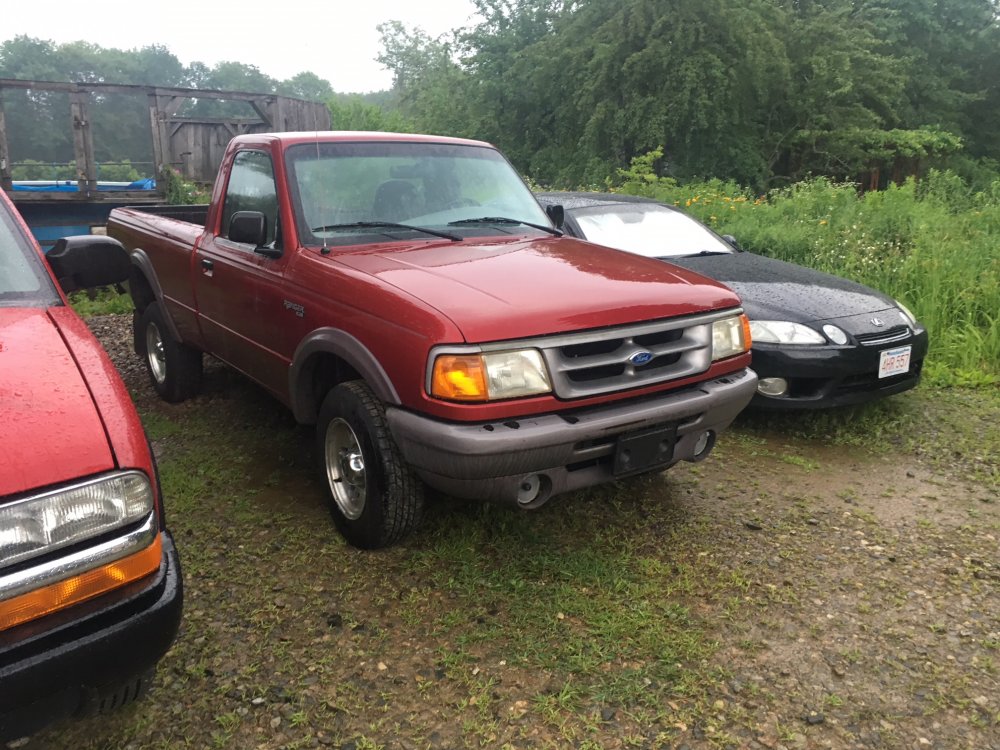 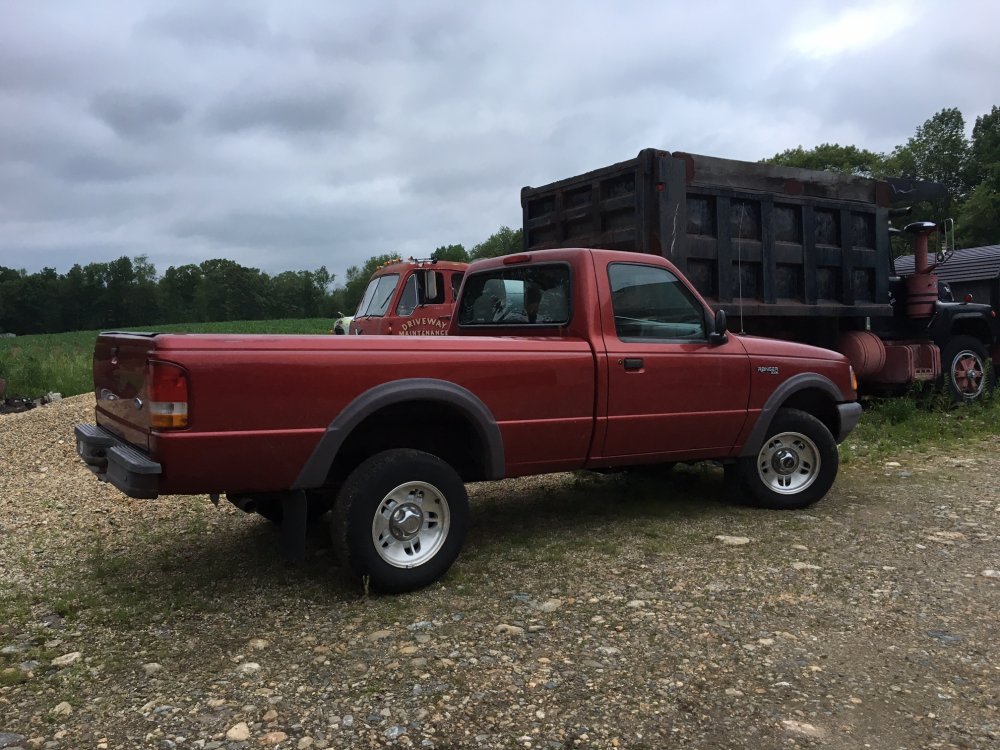 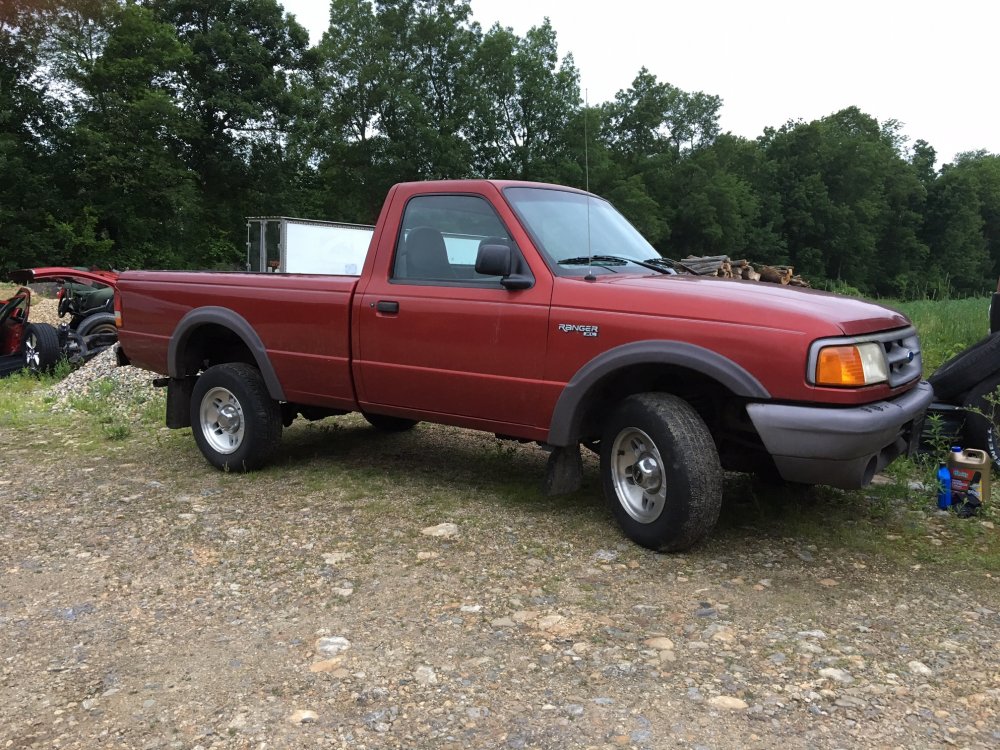 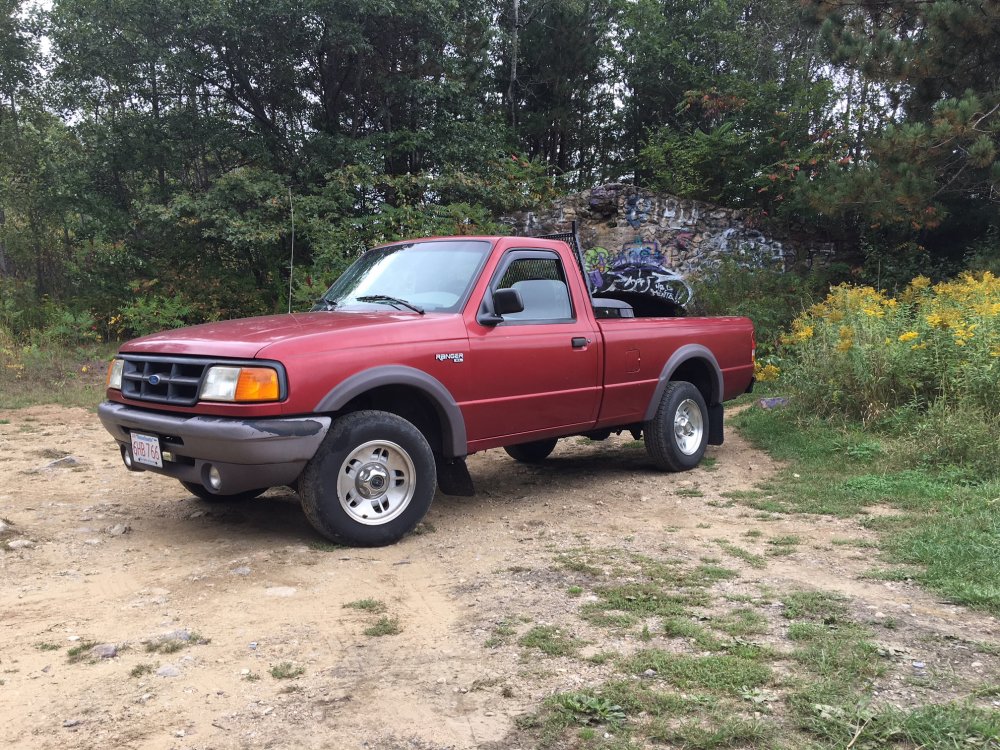 These pictures are from when I just got the truck back in July. I bought this truck for a decent price locally, it only had 108k miles on it and was very clean for a truck from the northeast. When I first got this truck, it really needed some attention. It ran and drove well and everything worked, but I had a coolant leak and an oil leak, and it was going to need a clutch soon. I also ended up finding I had a leaky fuel injector and over time the truck was getting harder and harder to start. It also needed some cosmetic love; it needed new fog lights as they were busted out, and I didn't like the gray/silver color on the bumpers plus the paint was peeling as you can see in this picture. I had a rack and toolbox on it (both of which I got for free) for a while as well.

Once I had the truck sorted out with no leaks and starting reliably again, I wanted to undercoat it since rust on these trucks around here is such a problem. I plan on keeping this truck around for as long as possible so this should help a lot. Here are some pictures from before the undercoating: 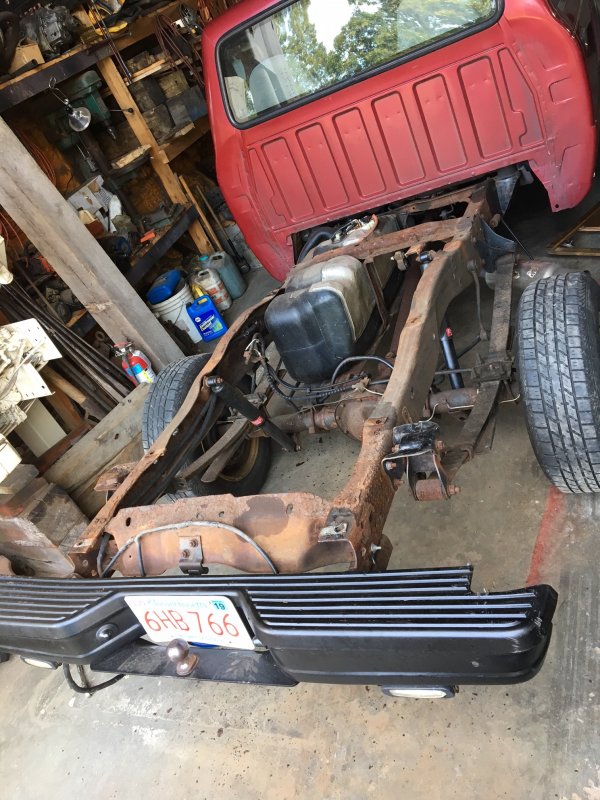 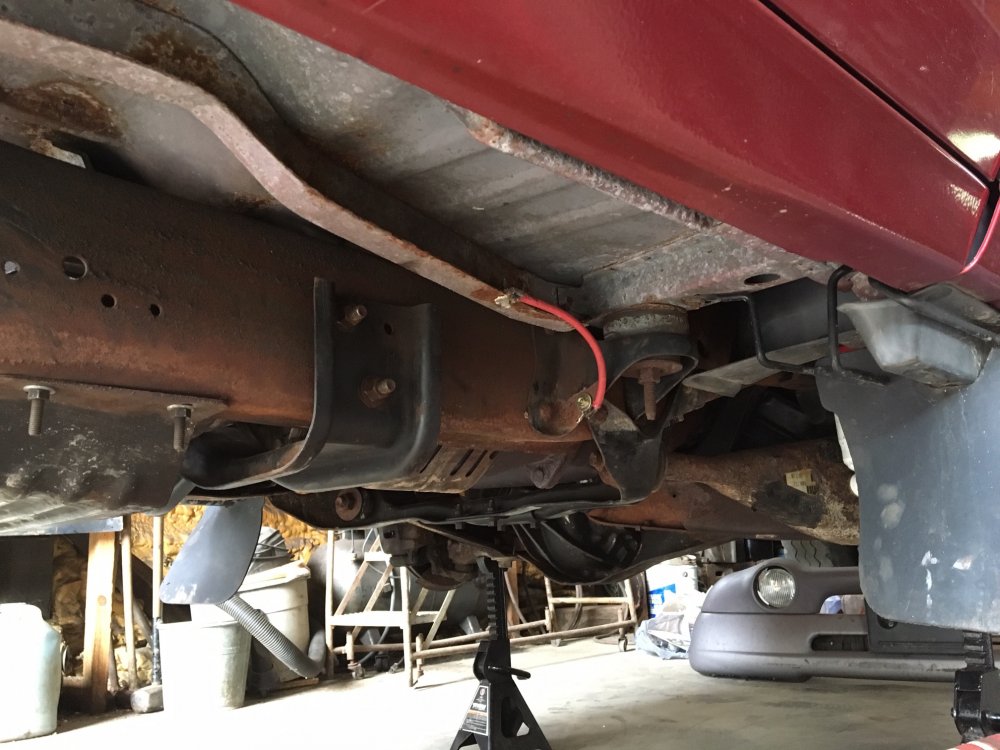 As I said, it was pretty clean for a Ranger for the northeast. The only rot was what you could see in the picture, the rear of the frame towards the bumper. The rest was just surface rust really. After some prepwork, I laid down 2 coats each of Eastwood's Rust Encapsulator and Extreme Chassis Black to just about everywhere I could reach. 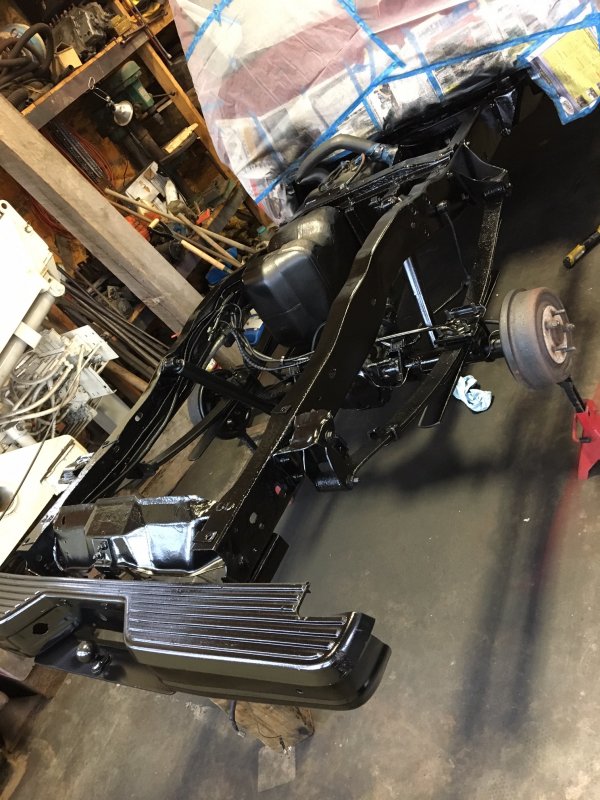 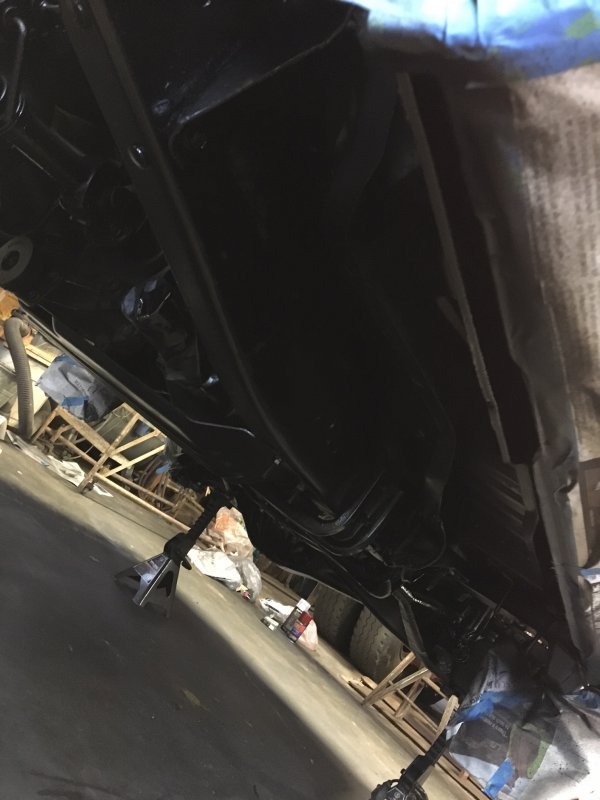 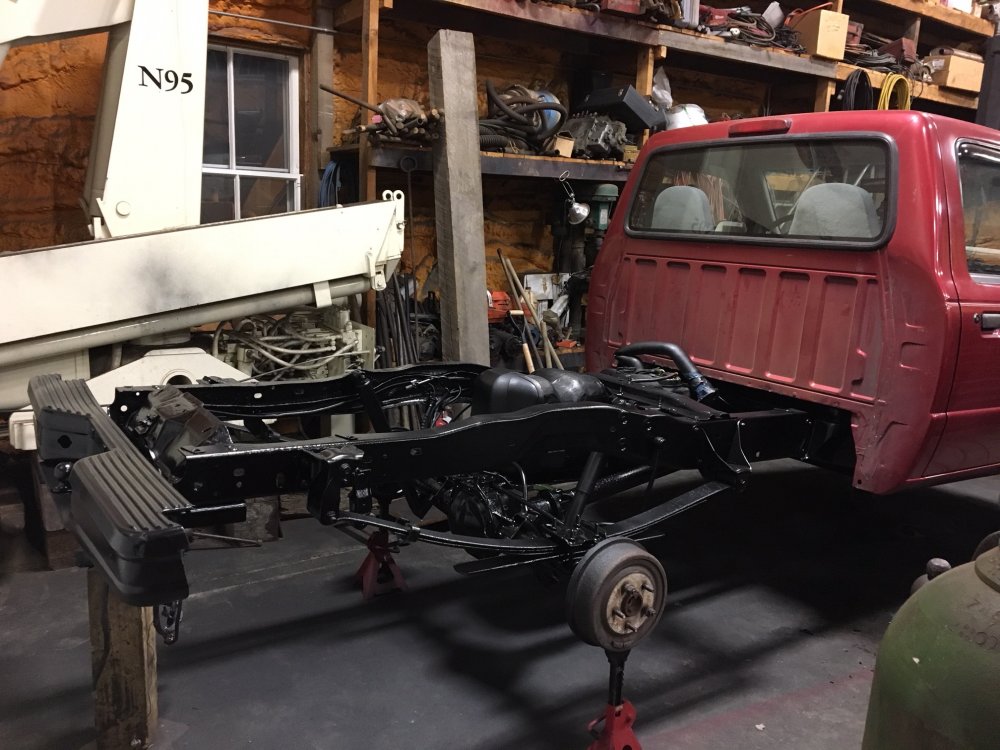 I also sprayed the bumpers, grille and fender flares and wheels black during the process and did an 01-05 tail light conversion. I found a 7' bed liner and a better matching toolbox locally as well, and added a side exit skunk muffler that I also got for free from a parts truck with a snapped frame that my brother bought lol. It actually sounds pretty good for a 3.0. This is how it sits/looks currently. 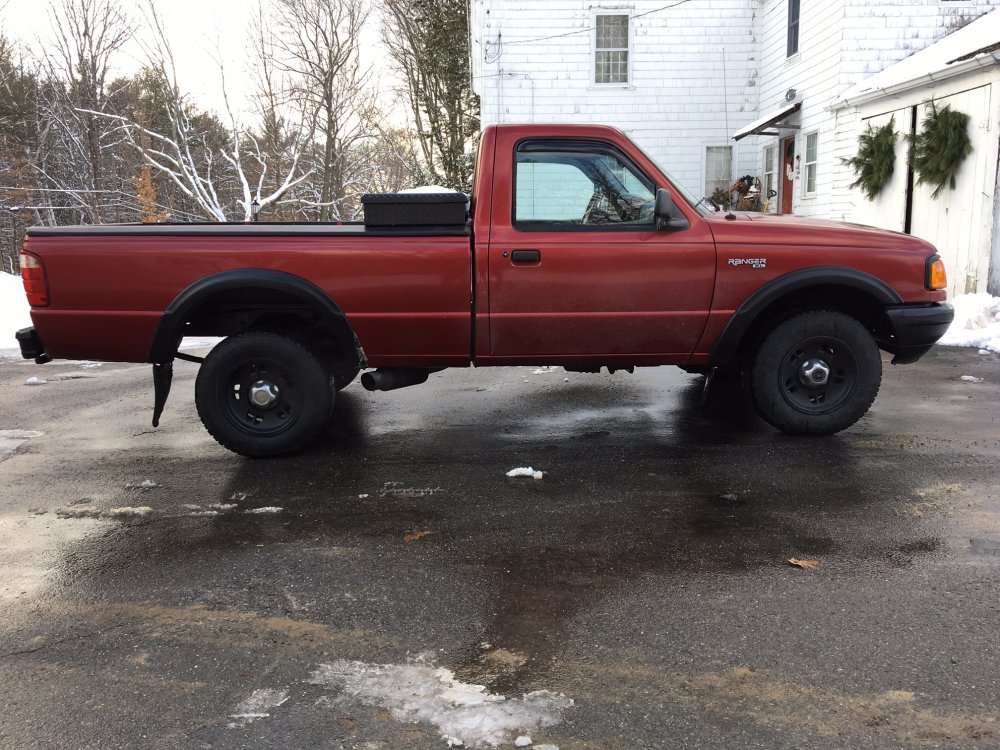 Some of my future plans include a front leveling kit, slightly larger tires (maybe 235/75 instead of 215/75), either an explorer rear end swap or an 8.8 L/S ranger rear end swap & mustang disc brakes as well... there's probably more I'm forgetting right now. Anyway, I'll keep this updated as I continue working on/modifying this truck

Id like to get my hands on a similar truck

Sent from my SM-G930W8 using Tapatalk

Thanks mavereq! I was definitely happy with how the undercoating came out. 1991fordranger1, I know what you mean; I set out for a couple months looking for the right Ranger when I was looking. I wanted a clean 7' bed manual 4x4 and lucked out with this one!
Last edited: Sep 10, 2019

Sent from my SM-G930W8 using Tapatalk

Converted from the single side exit exhaust to a dual rear exit exhaust. It was actually a $200 kit off ebay so I figured I'd try it and it actually sounds really good. It's 2-1/4" piping from the cat back. It's also all clamped together so at some point I may weld it instead. 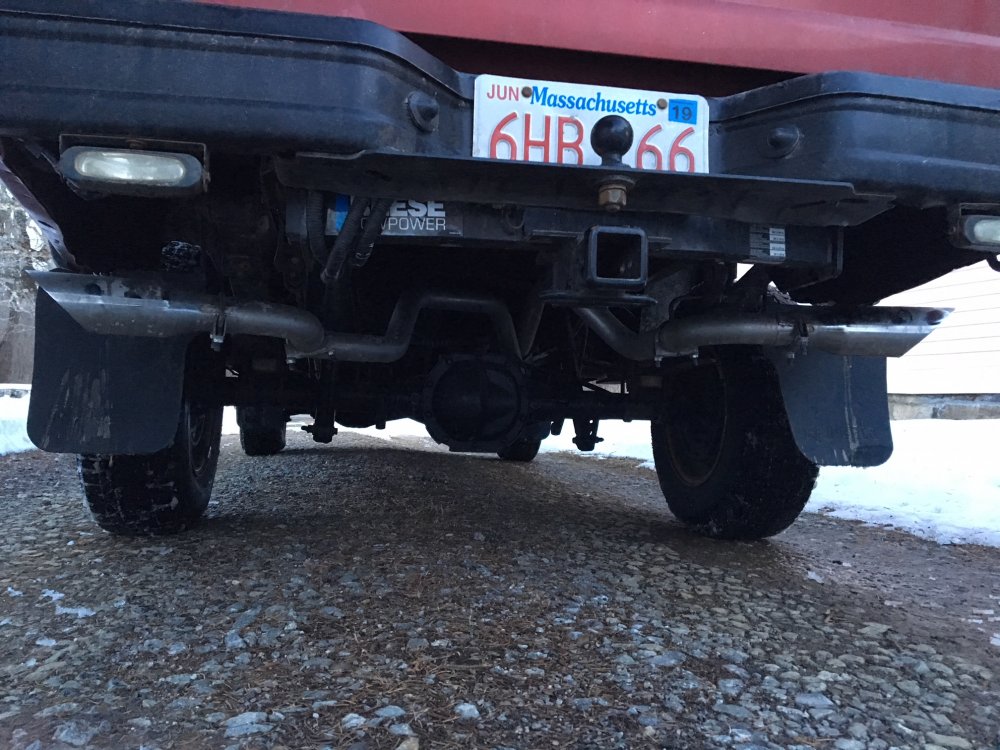 I also bought some wheels from a newer Ranger off craigslist and refinished them for my summer set. Also managed to get a deal on some used 235/75R15 tires in great shape off craigslist and am now running that size as opposed to the stock 215/75. The difference in size is nice, it's not too drastic but looks more appropriate. I didn't want to go too much bigger because I don't want the truck to become gutless and I don't really want to re-gear it. 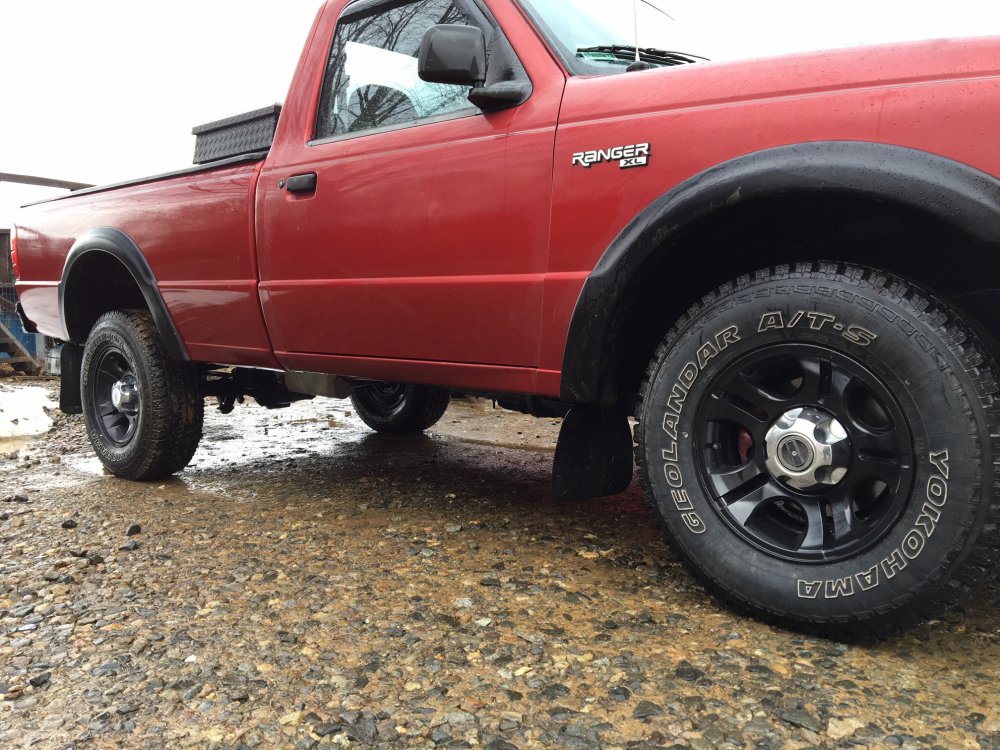 Next up will hopefully be a leveling kit! The lean has bothered me since day one haha
Last edited: Sep 10, 2019

Really enjoying the simplicity of this build. Hopefully within the next year I will be doing a restoration on my 1992 and putting it back into DD status.

Neat to see a newer longbox too.

Thanks guys! And DannyG - good luck with your build!

I ordered leveling springs and front sway bar bushings, so hopefully my next post will be of that!
Last edited: Sep 10, 2019

Managed a score on craigslist the other day - found an 8.8 3:73 limited slip rear end from an Explorer! The guy had welded on new spring perches and sand blasted & painted it to use on a project but then decided the axle wasn't wide enough. Once I get my leveling springs in I'll start getting this rear end ready to go in! 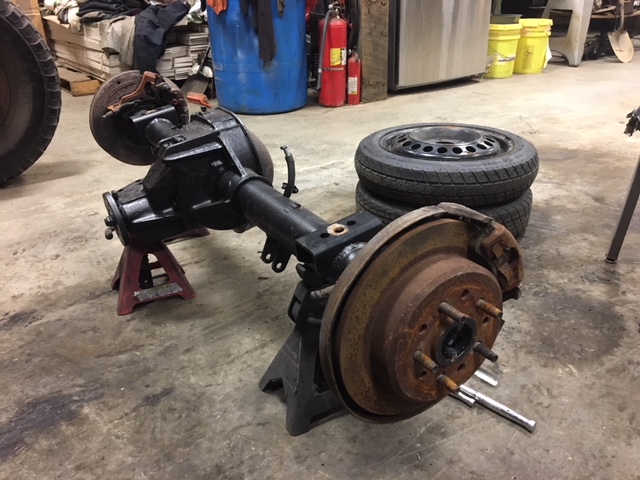 Got the leveling springs in today! Also took the opportunity & repainted the sway bar and replaced the bushings with poly bushings while it was out. 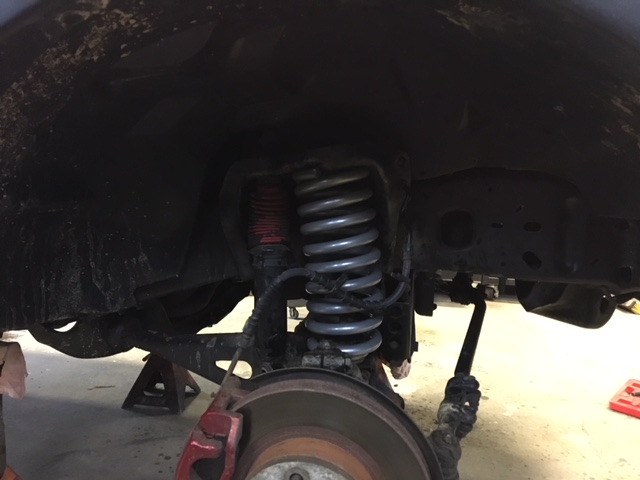 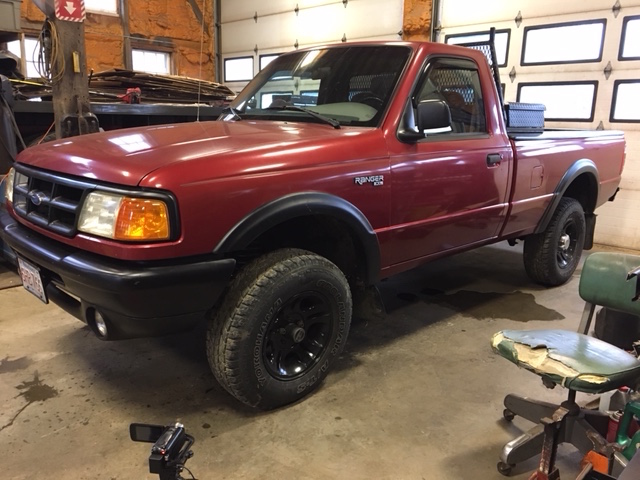 I tried to correct for the excessive positive camber after installing the springs. It's closer to stock but not quite there, I'm hoping as the springs settle that it'll come in more. If not I'll just suck it up and get some fully adjustable camber/caster bushings. 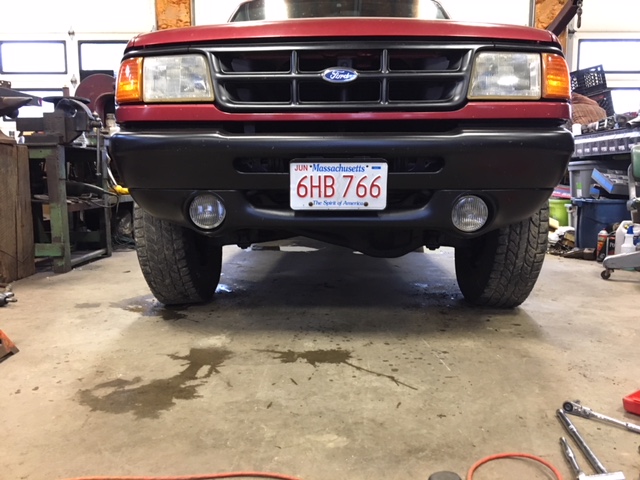 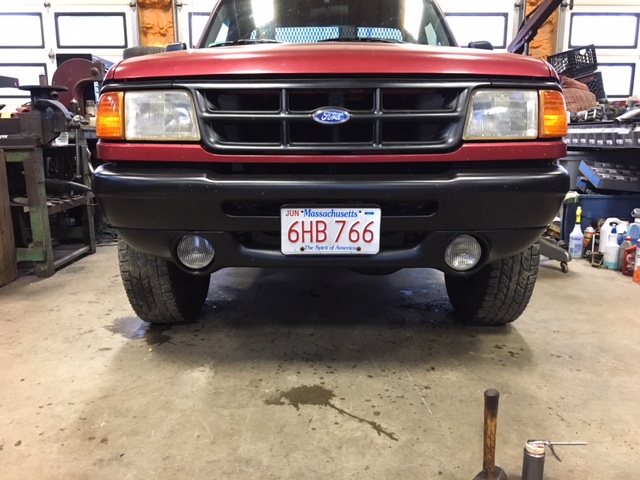 A little change of plans... I sold the 3.73 8.8 L/S explorer rear end I had bought. Long story short after pulling a small trailer with a lawn mower in it I've decided my truck would probably benefit a lot from having 4.10's instead of 3.73's. I really didn't want to have to change out the front diff as well as the rear but the truck could really use it.

The exterior is actually decently clean considering as well. 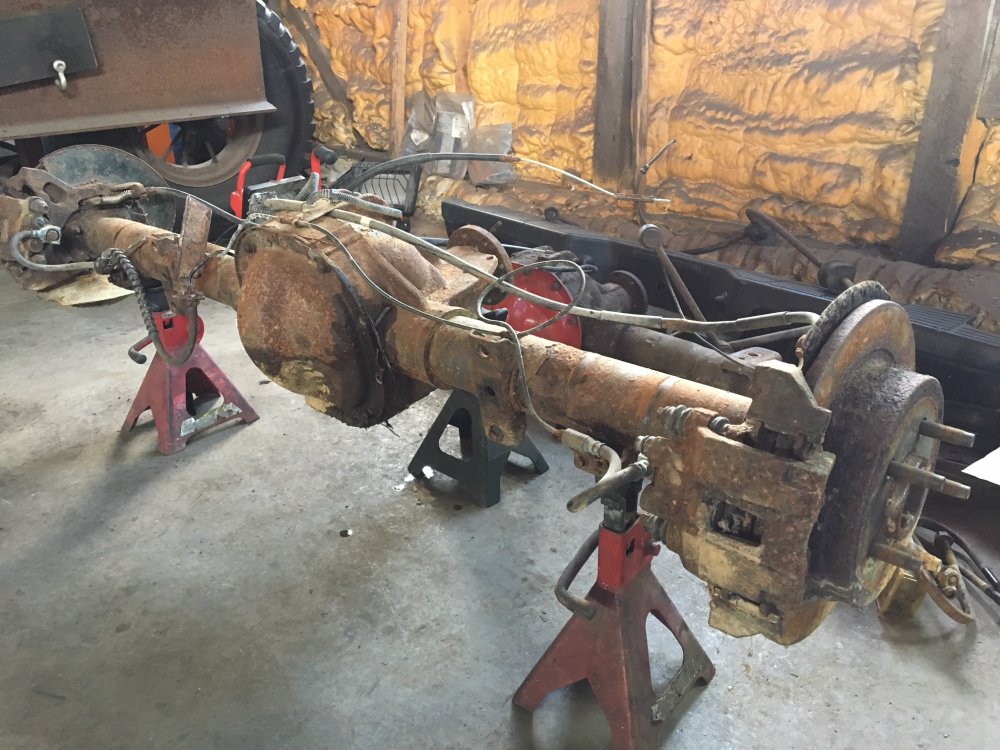 Small progress - got the spring perches & sway bar brackets chopped off, and with my brother's help, welded the spring perches back on in the correct location. He also helped fab up some shock mounts and we got those on tonight as well. 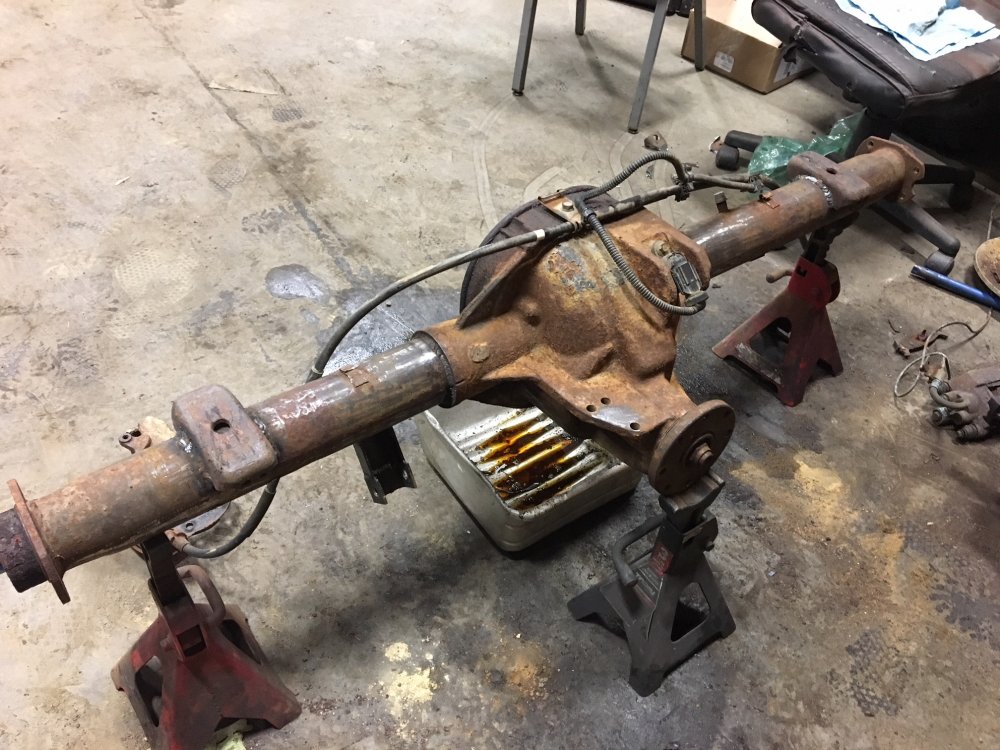 Unrelated to the last couple posts but...

I swapped in a set of 06+ mirrors today. That was probably one of the easiest and most rewarding modifications I've done! 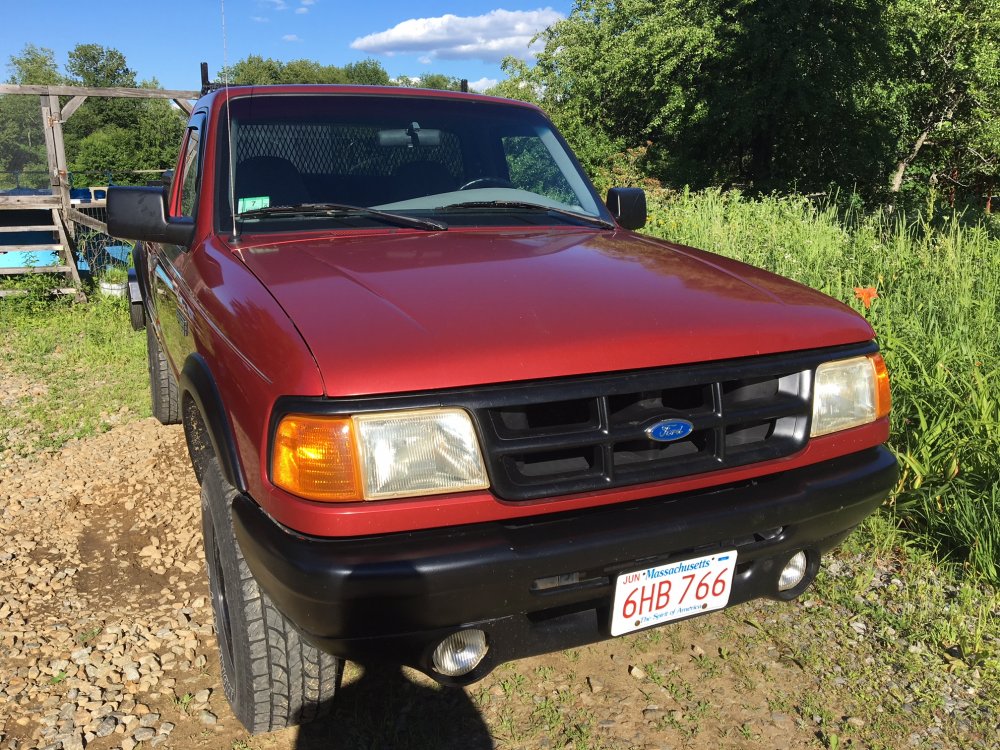