Hey guys! I figured I’d start the beginning of a build thread for my truck. Things will go slowly, but I’d rather take a long time and get it right than rush.

This was my Father’s truck. 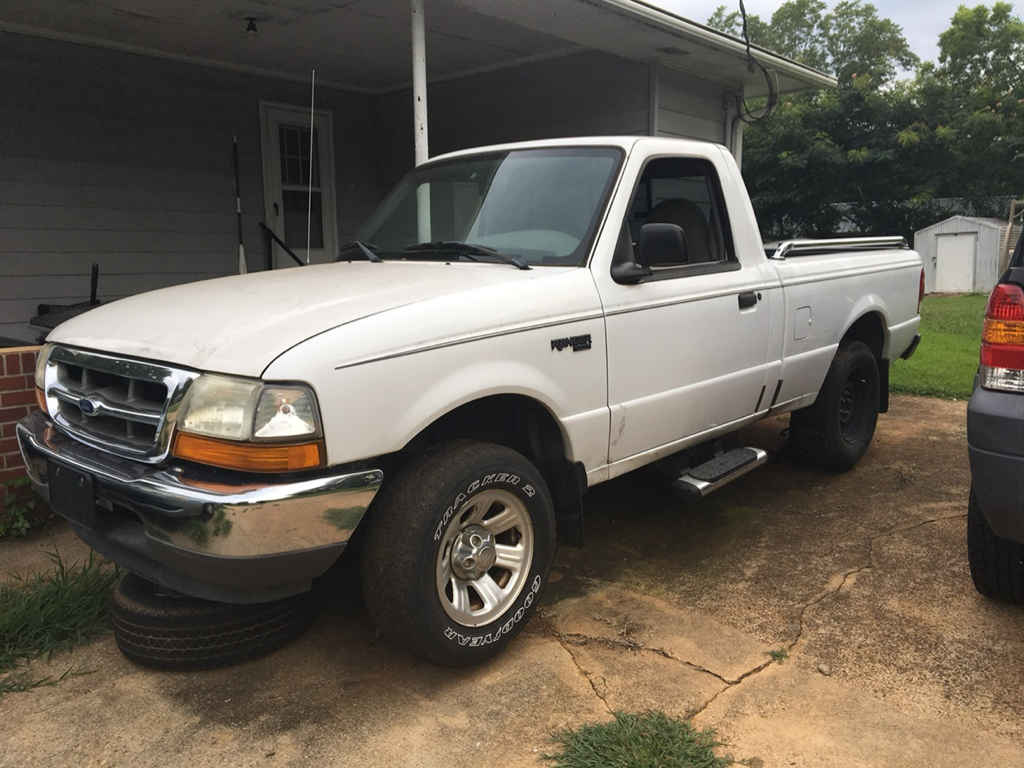 died in the Ford parking lot. Yup...that’s me in the bed.

After Dad passed, the truck sat and wasn’t used for about 3 years. Once it was given to me I rigged up some tow hooks to the frame

I pulled it around to a better working spot and put it on jack stands all around.

It needed a lot of work...coils, plugs, tires, oil, sensors, gaskets, injectors, brakes, discs, and a lot more than I can remember. When I first fired it up it was rough. Turns out it had a #2 cylinder misfire and a lot of water in the gas. It also had a goober of an owner who wired the coils to the plugs wrong [emoji2957]. After I finally got them wired right, it ran well enough.

I ended up putting in a JVC-430BT double din radio in with a Bazooka sub and Rockford Fosgate speakers in the door. I hated that radio, sub, AND those speakers! They were mismatched, glitchy, and sounded like tin. Fast forward a while I now have a Pioneer AVH 500-EX with Skar 6x8 speakers and a Crunch 8” powered sub (CR-8A) 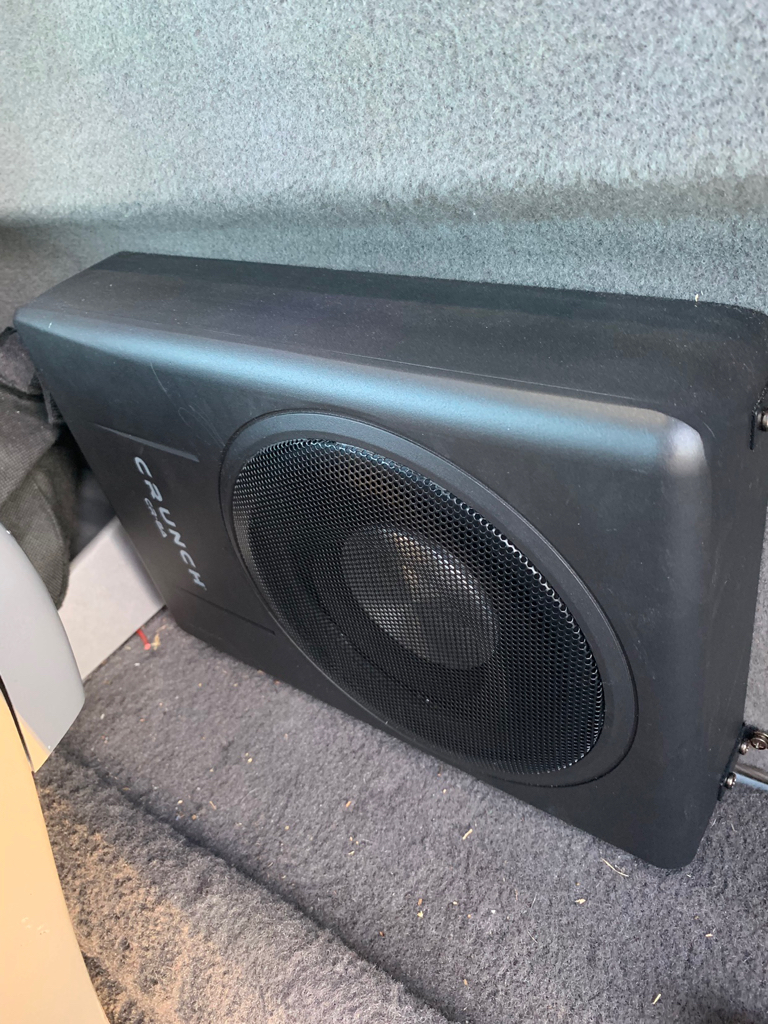 behind the seat. Sounds AMAZING!!!

I also put an Explorer console in but have yet to put a new shift boot and knob on.

Currently I’m working on some white face gauges from a Sport Trac. 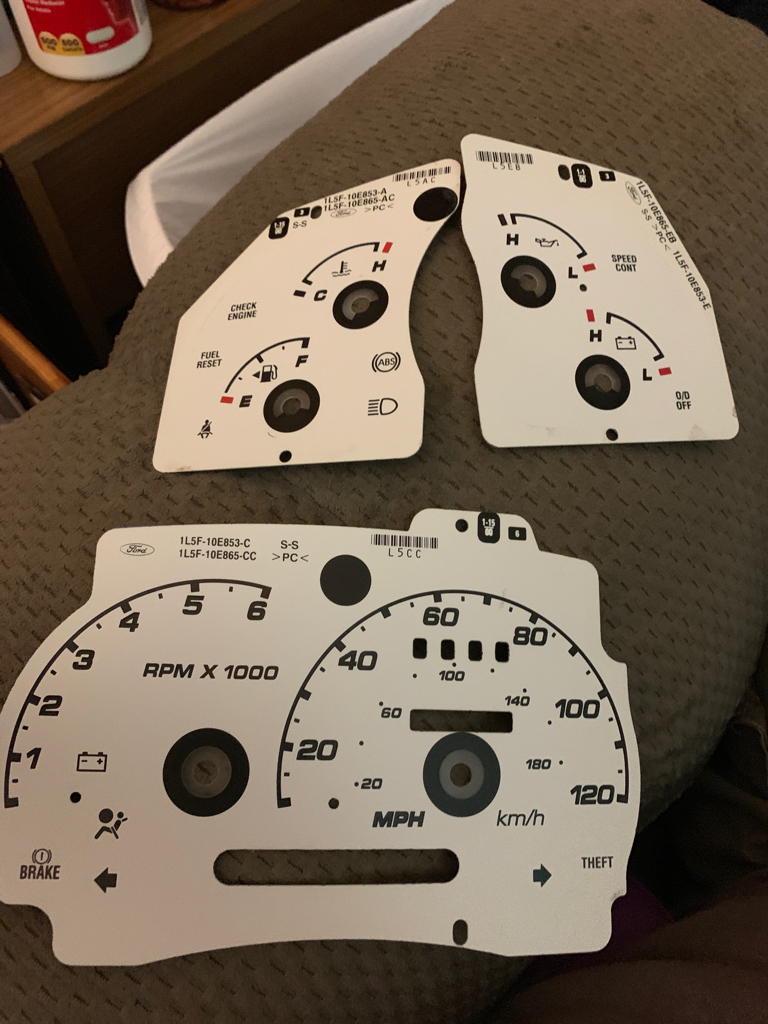 The green film has been sanded off and I’ve been working on putting colors on the backs so they have blue main lights with red where the “red line” would start on both tach and speedo. The LEDs are on the way. As soon as I get that done I will post the pics.

NOW here’s where I’m getting a “creative block”. I’m not sure where to go from here. Thought about lowering it 2/3 but have heard a lot about the crappy ride. I’ve thought about leveling the truck or lifting it just enough. Nothing crazy. I would like to trail ride with my uncle and cousins, but I have an open diff. Not any rock crawling, just gravel and dirt. I’m not sure how to proceed both properly and economically. Suggestions?

Things I know I’m going to do: exhaust (Gibson or Dynomax), going to have it painted (possibly blue or black), wheels, possibly tires depending on my altitude adjustment, some reupholstering with Marine grade vinyl like the console lid I did, and full LED swap inside and out. 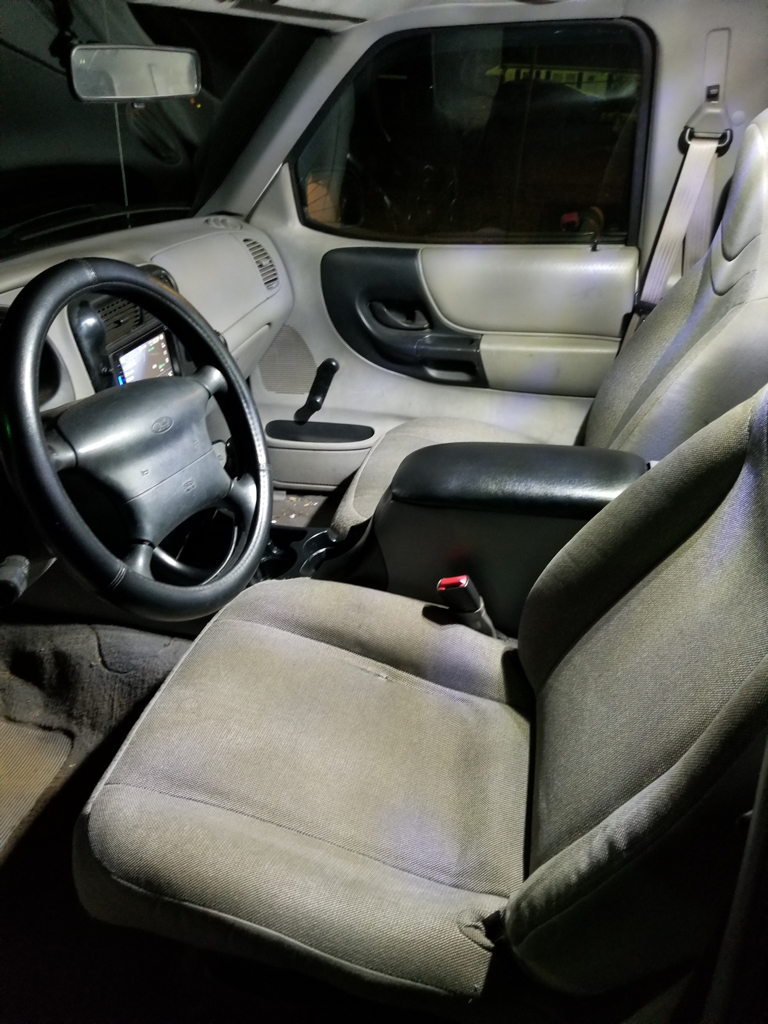 So that’s it for now. I welcome any suggestions, tips, tricks, and help that y’all might send my way.

Looks like the start of a great ptoject and its always awesome to see a truck that actually has history and meaning to the owner.

Keep us updated on your progress!

Nice man. Looks like a good start to a fun project.

Sent from my SM-G955U using Tapatalk

Welcome to TRS.
There is a great tech section at the top of every page, 3rd button from the left. There is a sub-section dealing with lifts and lowering on the cheap. Considering your going offroad with it, I would go with a slight lift on the front, tho you may not need any lift at all. Try it first before spending.
There is a cheap way of getting posi that I learnt from a hot rod mag waaaay back in the day. You need a couple extra side gear shims from an old rear. Add 1 or 2 shims to the existing side gear shims and voila, posi. I've done 2 different diffs this way and both worked fine. One on a 9" and one on a d-28. Couldn't get much cheaper as it's only the cost of new gear oil. Be aware that this puts extra stress on the side gears and could potentially go @#$%&* on you. One day I'll do a write up with pics, but don't hold your breath.

Sounds good. The truck looks good in person, too. It was nice meeting you the other day. I'll keep an eye on your thread and you know I'm close by if you need something.

ericbphoto said:
Sounds good. The truck looks good in person, too. It was nice meeting you the other day. I'll keep an eye on your thread and you know I'm close by if you need something.

Thanks brother! I wouldn’t mind lending you a hand sometime either. Your truck looks like it would be fun to drive.

So I had ordered some LEDS from superbrightleds.com last week to use in converting the white sport trac cluster gauges to LEDS. I tried it once with my first Ranger, but had poor results. I’m the kind of guy that doesn’t do things halfway, poorly, or without a LOT of research. Doesn’t mean I don't mess up with all of that...I do.

Anyways... the LEDS came in today!!! I was super stoked to get them and get them installed. I had thought about light transmission, opaque vs transparent, white vs color...researched and listened to all the things people said about their conversions and began the planning. I decided that I wanted multi-colored opaque gauges similar to what is in newer more complicated gauge clusters. The light had to be bright AND able to penetrate the medium used to color the gauges. A BIG deal for me was to do it as cheaply as possible. I ended up buying one $0.25 opaque red plastic 2 pocket folder and one $0.25 opaque blue plastic folder from the Mart of Wal, and double sided tape (already had electrical tape and clear tape). I wanted the "danger" zones (tach and speedo) red and the rest of it blue. Idiot lights converted to LED and kept original colors. The pics are as follows:

2:Original nighttime (yup...got a light out) 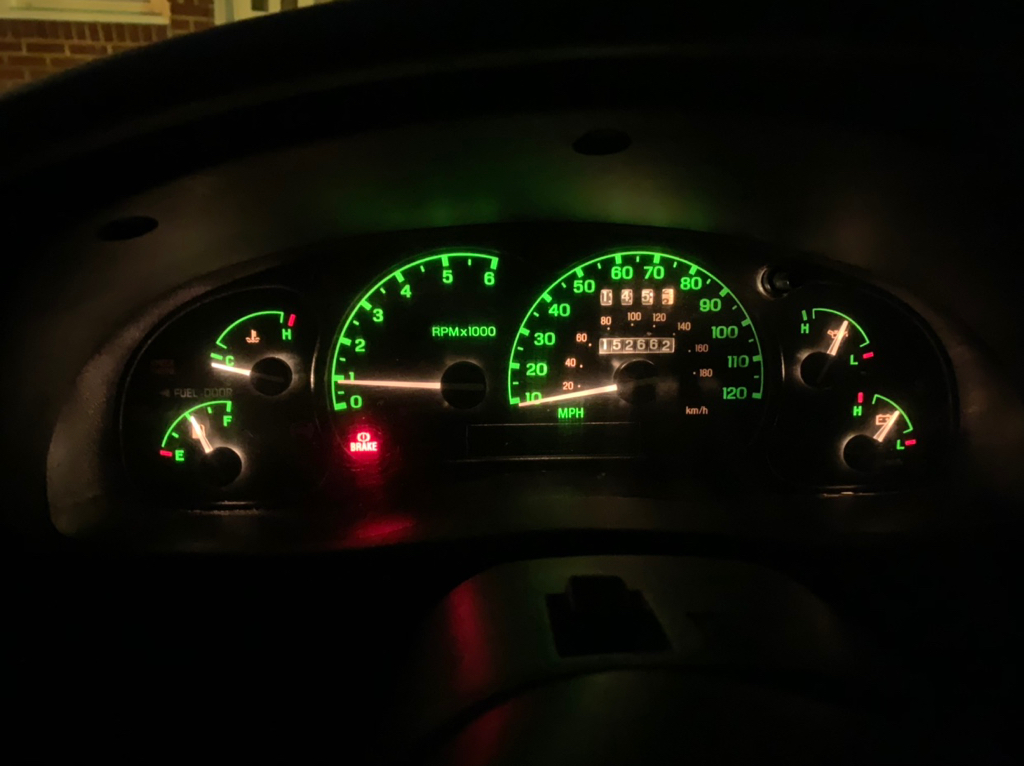 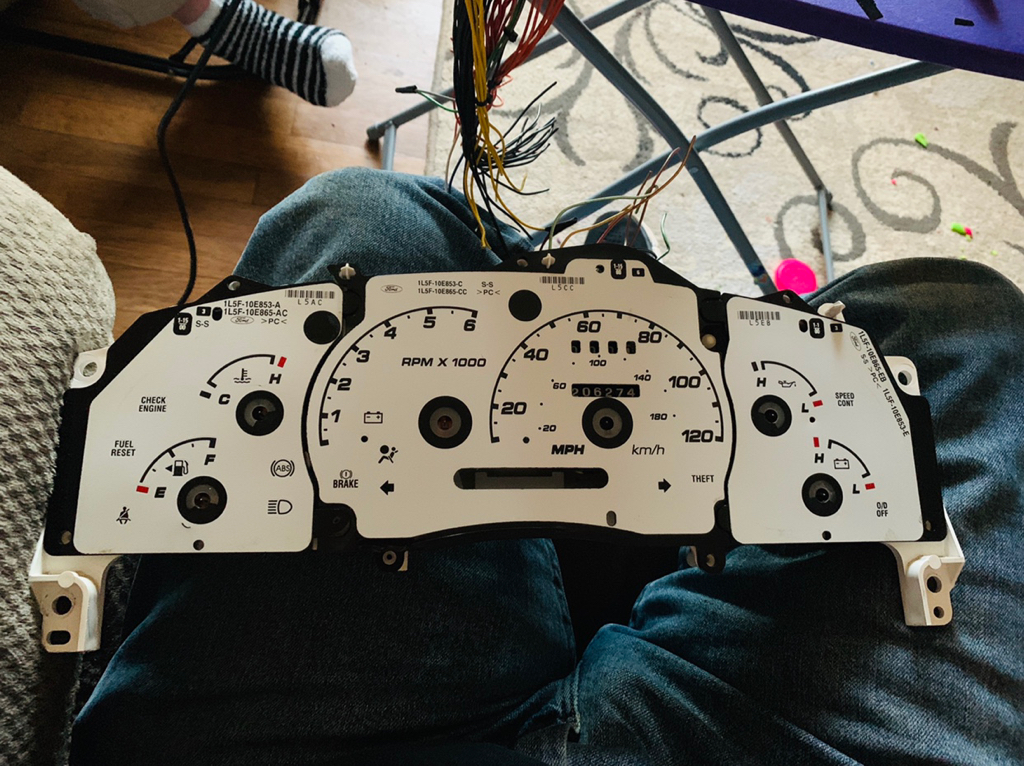 4: White face nighttime (closest approximation with manipulation of values) KM/H blacked out with electrical tape...Not important to me to see at night. 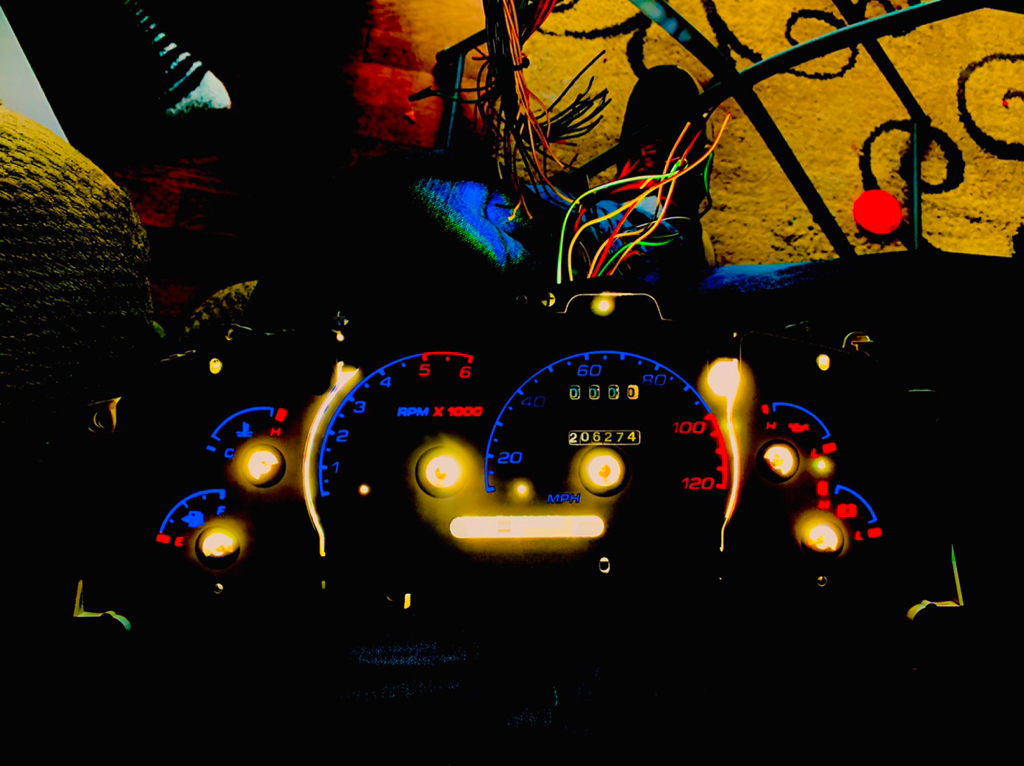 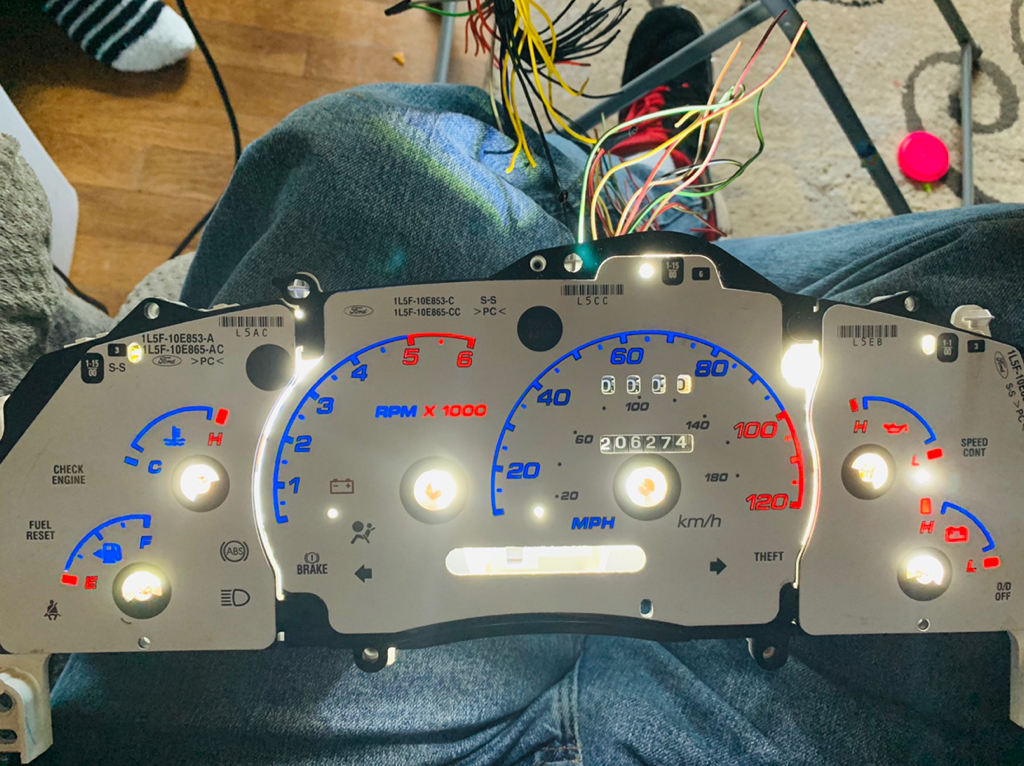 I think so far this has turned out great!

I'll get more pics once the cluster is installed. Going to do the HVAC controls as well in the same style. Just gotta figure out the HVAC knobs. Stinkin things are green plastic. Maybe I'll order some different ones. Any suggestions?

I live in upstate SC and we’ve had a LOT of rain here lately. I’ve noticed that my carpet on the driver’s side had been soaked through. I ended up pulling the carpet out because it started to smell like mildew. Here’s the current state of affairs... 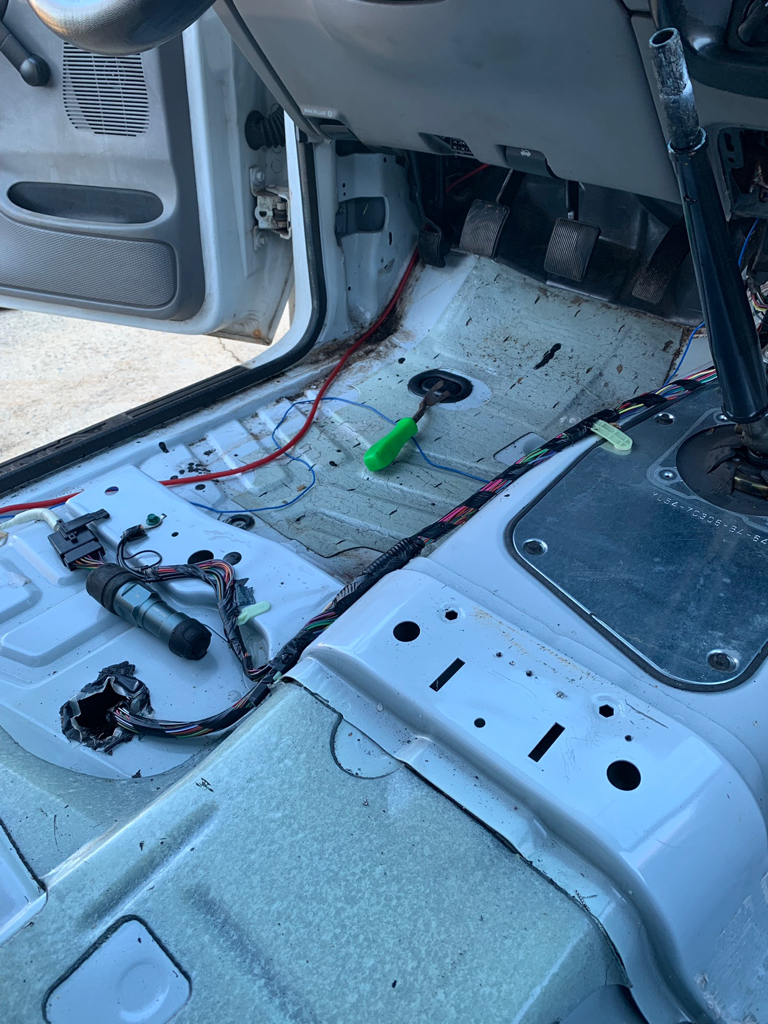 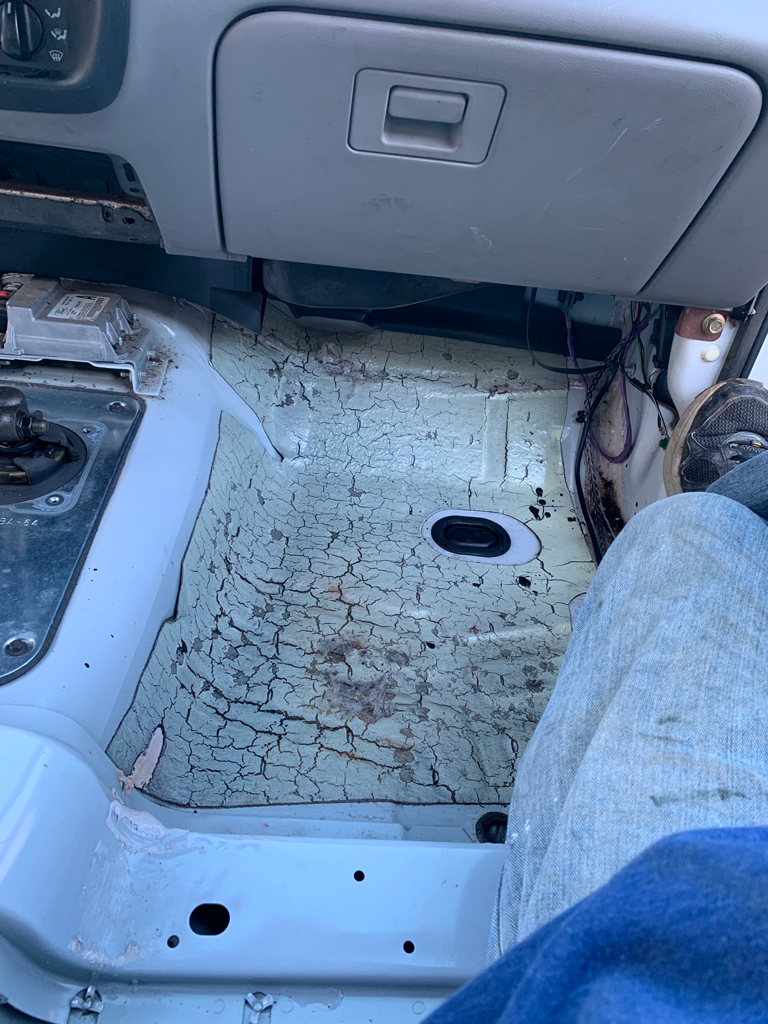 In the first pic you can see the wire junction box thingy has been pushed through the floor pan. I think the problem with the cab having two body/floor plugs being rotted, and where the 2 plugs go there was bent metal. I think both problems led to my floors becoming soaked...that and all the puddles that splashed up.

Been painting my stock gauge needles and needle center covers tonight. They used to be clear plastic with white on the centers and needles. 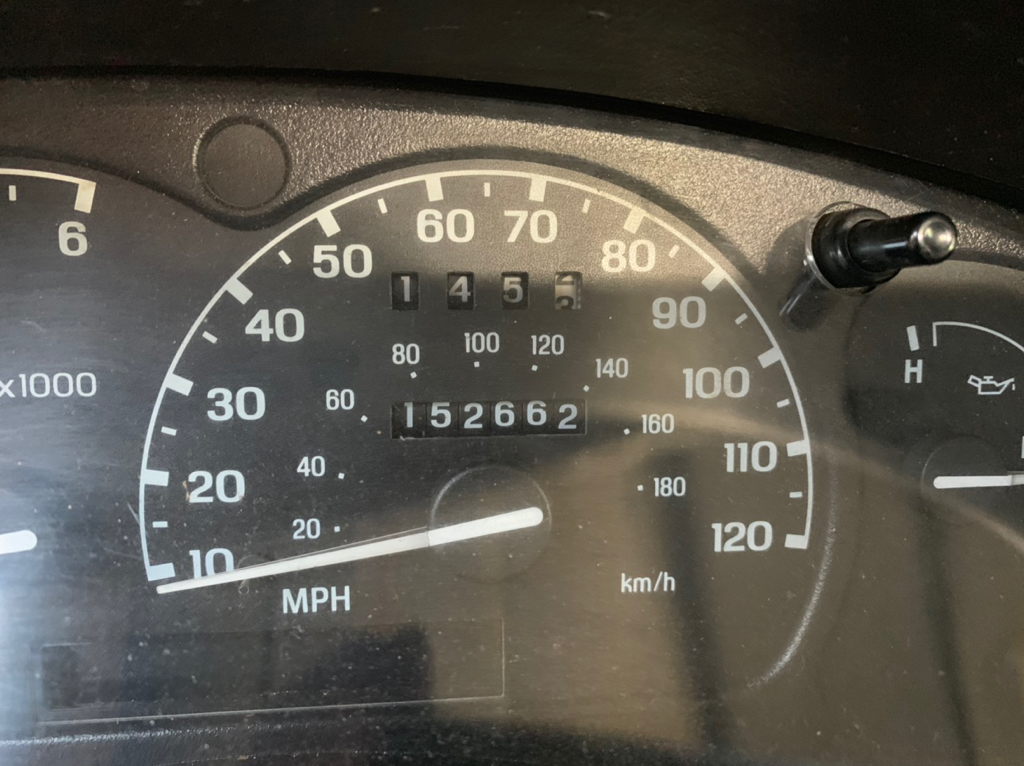 Now (hopefully) after they dry and I have the oopsie spots scraped off they will be red needles. 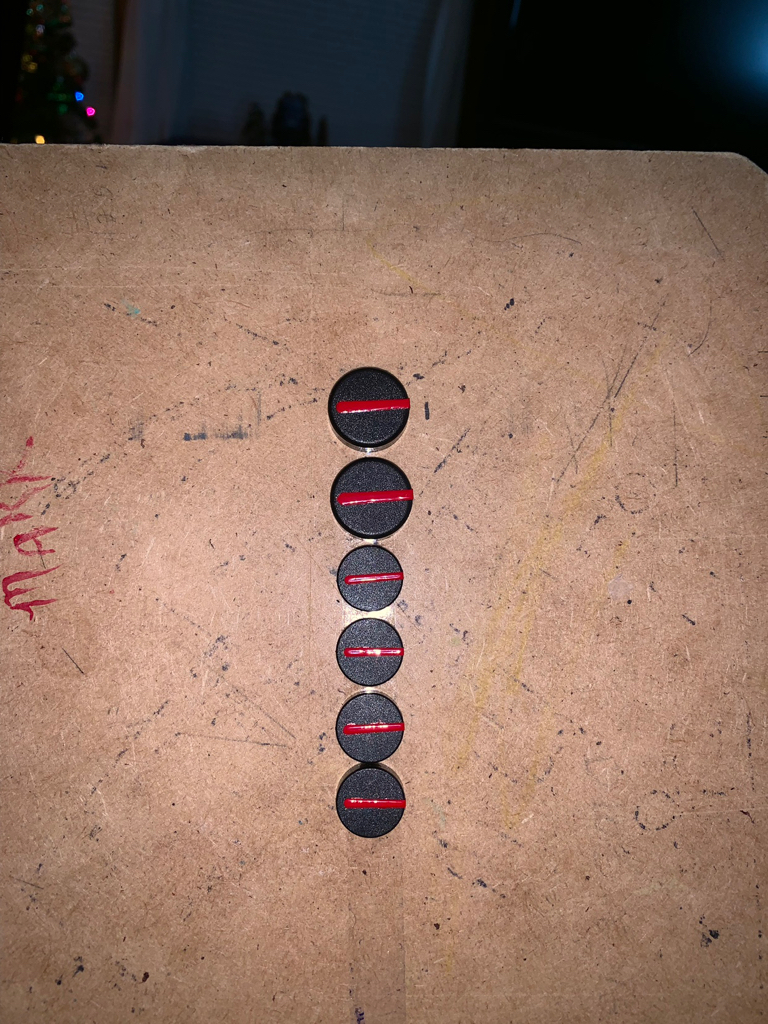 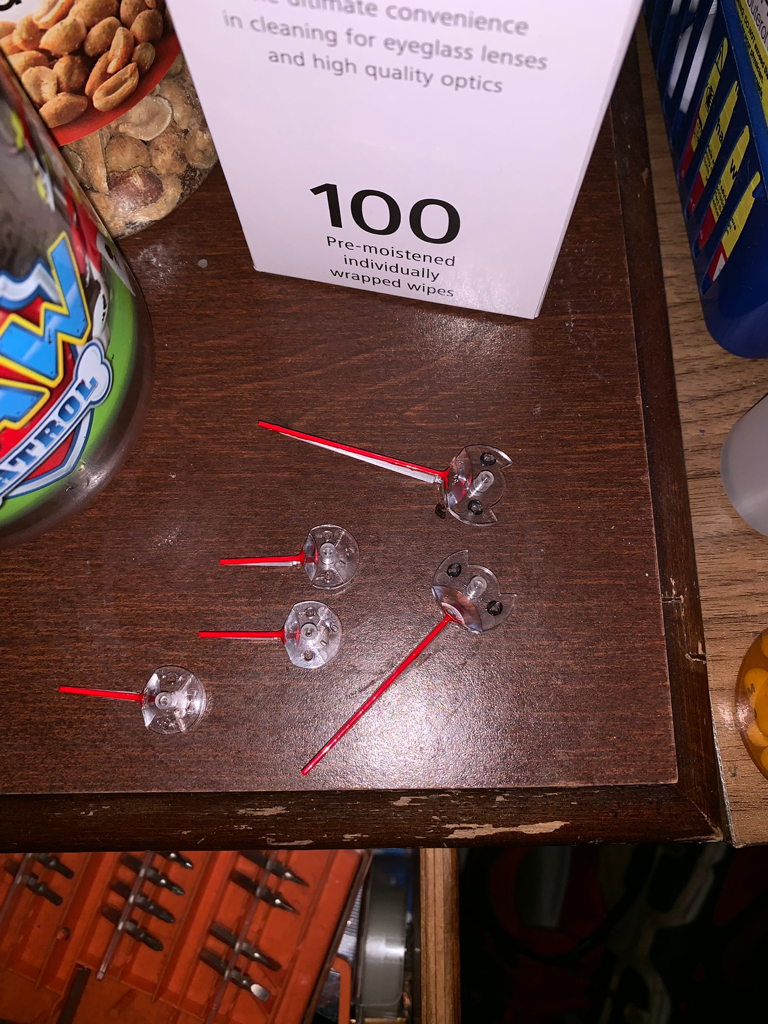 Here’s the original write up:

So the DIY red needles didn’t work out and had to scrap that idea. Just for kicks I put on the Sport Trac orange needles to see how it would look. Looks great! Only problem is I lost one of the needles.

The camera picked up more light than it should have and washed the colors out. In reality the blues and reds are brilliant. I figure I’ll go to my local pick and save and try to find a complete set of needles (hopefully red ones). 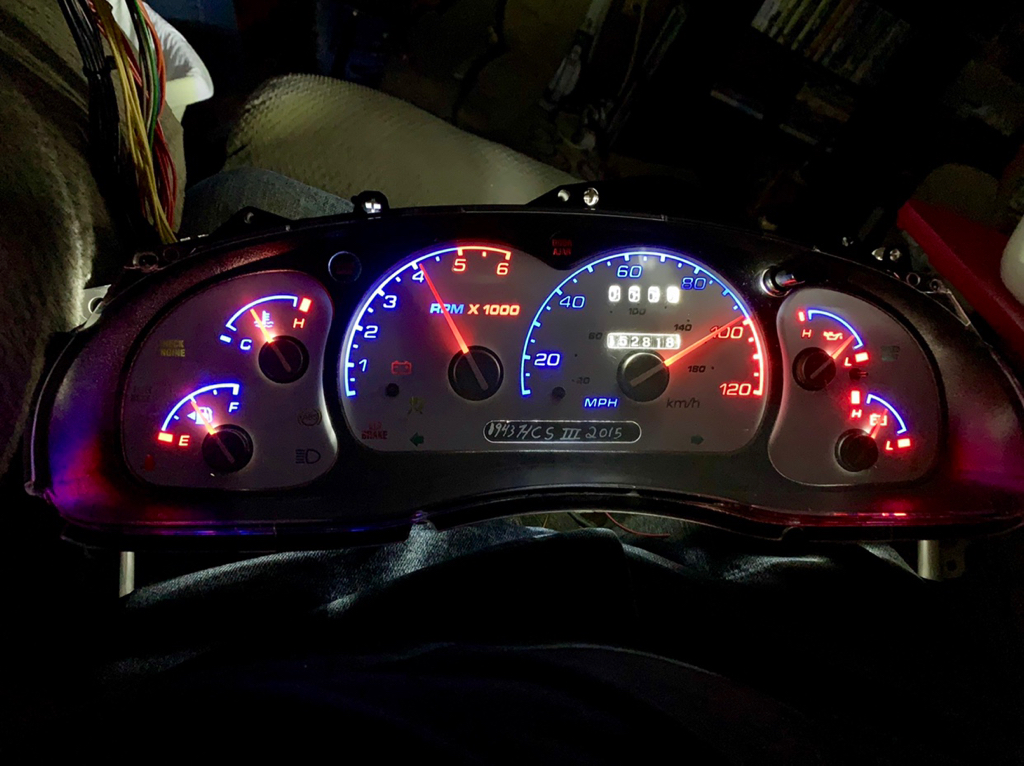 Since my attempt at DIY red cluster needles didn’t turn out great, I decided to go to my local pick and save to see what I could find. Found these red needles from a ‘03 Mercury Mountaineer.

This is the final mock-up of the cluster. I’m pretty satisfied with how it turned out! It took getting parts from about 6 vehicles to get this result. 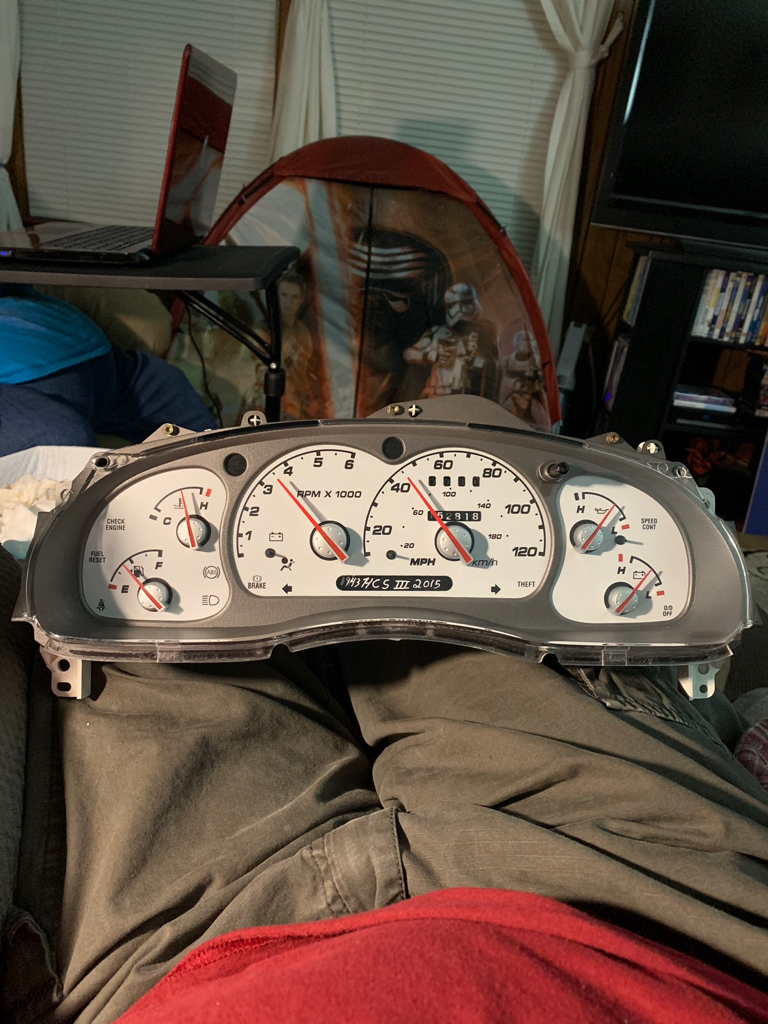 The camera really doesn’t help much, but here is a “night shot”.