I recently picked up an 85 2.8 5 speed B2 after finding it was optioned almoat exactly how I wanted one when I was in high school. Its kind of a replacement for my wrecked 84 Ranger from a few years back. Like the 84, its from a junkyard. Unlike the 84, it has all the smog crap and won't pull past 4000rpm. Im going to be durasparking it and swapping on a 4bbl, later camming my spare engine and boring it .30 over with 9:1 pistons. This leads to my original question.

Can I make the cruise control work with the 4bbl carb and smog delete? I want this thing to be an avid road tripper with its 3:45 gears and a cleaner underside than the truck in my avatar. Its dented and re-repainted but its so clean underneath that the cat still has the heat shield and its not even rusted! Im trying to keep everything working and have no clue where to start with cruise.

I want to see all 49 states I can drive to, and I want to ignore my pedals for most of it while still making it to an 80mph cruising speed with the a/c on.

You will need to keep the vacuum reservoir but yes.

I am running the factory cruise with a Edelbrock 4bbl.

Should be easy to keep the cruise control. If you follow the cable from the servo to the carb throttle linkage you'll see that it's "piggy-backed" to the one from the gas pedal. You'll just have to duplicate this arrangement on your new carb. That's the main point that the cruise touches the engine, the old carb / new carb. Besides that, you'll need to keep the vacuum supply hose.

Once you get to the point of building an engine, 2.8's respond well to planing the heads .030". I built one using the Offenhauser dual port intake, a 390cfm Holley, 1 1/2" tube headers, and the middle of 3 cams Comp offered(don't remember the specs). I recurved the duraspark distributor to get the centrifugal advance all in by 3000. I put the engine into a 64 Sunbeam Alpine with a T5 from a 4 cylinder Mustang(3.95 low) and it was a rocket.

After gawking at this engine bay for awhile, the piggybacked clip is broken off the throttle, which I know I can fix with zipties, what I cant fix is the mess of vacuum lines on this thing. I've found the diagrams for all the smog junk, but not one for how the cruise hooks up. Anyone have a diagram for it? I'd like to get it working on the factory carb first.
@19Walt93 I've always wanted to do something like that. My original plan after my '84 got wrecked was to stuff the entire 4x4 driveline into an MGB and built the motor to the teeth, and have a 4x4 sports convertible that wasn't a Jeep.

In other words, I swapped my new-before-wrecked fuel pump off my '84 onto this one and now have a working pump, but it fuel starves horribly after about 20 seconds of wide open, which in this trucks case is 20mph at 3000rpm. I'm blaming it mostly on the "reman" Napa carb on it, but my '84s proved to be a useless fuel leak when I installed it. Should I blame the carb, or the fuel pump for not supplying enough fuel? It also refuses to rev, even in neutral, anywhere above about 4500rpm without coughing and sputtering. My old 2.8 with no vacuum lines at all on it would pull to almost 7k without flinching, what on earth is wrong with this poor thing?

Some pictures of this oddly clean but dented rig.

Post a picture of the broken clip, I may have one.
If it's run out of breath like that since you installed the carb I'd check the float level before you get too involved. You'll have to pull the clip off the choke linkage on the rt side of the carb, remove 6 screws and disconnect the air intake for the choke at the rear of the choke housing and the top will lift right off. There's a spec for setting the float but if you bend the tang until the float is roughly level you'll be close. If the float was tipped down when you open it up you've likely found the culprit. If this is something that started later the first thing to do is replace the fuel filter and dump out the old one. If it's full of rust and dirt you may end up dropping and cleaning or replacing the tank, then flushing the lines and pump. If it sat for a long time I suspect you're going to end up with a new tank.Good luck.

I figured someone had messed with the variable venturi jets when "remanufactured" as well as the float being off. I'll look at it this weekend when I drive up to where it's currently parked. It's not clogged with junk, and didn't run out of breath when I ran the electric bypass pump temporarily. I'm thinking the cam lobe may be worn judging by how much more wear was on the pushrod that was in it vs the one in my parts engine.

It has a VV carb? I would expect it to have a feedback 2150,unless maybe it has California emissions.

From what I read the feedbacks were VV, but maybe I'm wrong. If that's the case I'll tear the "reman" apart and stuff my old one's jets in. It might also have bad timing since it pops and misses anywhere above 4500rpm, even free revving. It seems to be an issue that compounds into fuel starvation and no power.

I am confused by this thread. You wanted to know how to put cruise on a 4bbl carb? That was a sign to me this engine had been converted over. But later on in the thread you are complaining about all the vacuum lines and trying to get diagrams to figure it out and put cruise on it?

Convert it over and be done with it. I just did mine and it runs great. I have a huge pile of wires and vacuum lines I took out, I should take a picture of it.

I was just pleasantly surprised yesterday. I have been driving it to and from work, but yesterday I took it on a long trip down the interstate. Doing 70-75mph, it did great. My 2.9 had lots of power, but on the interstate it always sounded like it was winding too high and was going to blow up. This 2.8 just cruises silently down the road, it's actually quieter at 75 mph than it is a 60 mph.

JunkCollector said:
From what I read the feedbacks were VV, but maybe I'm wrong. If that's the case I'll tear the "reman" apart and stuff my old one's jets in. It might also have bad timing since it pops and misses anywhere above 4500rpm, even free revving. It seems to be an issue that compounds into fuel starvation and no power.
Click to expand...

It's easy to tell a 2150 from a VV, take off the air cleaner and look. If it has a choke plate it's a 2150, VV's have black sliders that move back to open the air flow. Variable Venturi carbs worked great if they were set up precisely following the procedure, if the tech skipped steps it never worked. There are some adjustments- the seats that the metering rods slide into, for example- that should never be altered because there's no way yo correct them after they're screwed up. This is a top view of a VV: 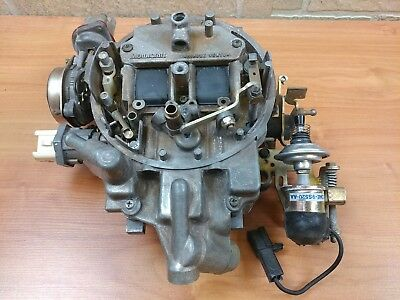 Yea mine's definitely a 2150. Im trying to make the poor thing run "good enough" until I have the time and money to throw at all the parts to convert it over. It starts up instantly right now so I should probably leave it alone until later. I wanted to know if the cruise could work before I did the conversion, instead of doing it only to find I had 5 useless buttons on my wheel. Thanks for the help, all! I'll be making some updates when I finally start building this thing. Work is slow because its in storage an hour and a half away from me right now.