I bought a 2001 explorer V8 unicorn (as far as I can tell) as a donor for a Ranger swap.
It was a Mississippi car which means it hit one or more immovable objects in its life.
With this car a baby momma and a baby daddy who thought they would do something cool with it, after baby momma drove it into a fireplug—— decided to unload the “remains” soaked with pot smoke, black mans mild wrappers, monsters spilled and some Starbucks Mochas (or a murder took place in the car).

No matter, it was a great drivetrain with 237k on clock and 2wd. Yep, a 2001 with 2wd. Now from all data, Ford didn’t produce 2wd in 2001, only awd. I can’t find valuation references for anything but AWD. But for sure, my peg leg 3.55 rear by VIN decode is from the factory and the car is as delivered by Ford.

I had two ranger swaps planned and this was to be daily driver fodder. But funds in 2020/2021 (investments) hit the skids as did for all of us and the heap of crap never intended to be roadworthy again, sat silent.
But….. as I looked over the car many many times, I had a vision of it being back on the road, even if only a beater.
I started with many hours at the junkyard and procured all the replacement parts, front bumper, hood, a front wheel. I decided that If I put a few bucks and a bunch of hours into it, I could sell my 90 Frankentruck ranger that is devoid of AC and have a bit more comfortable car to drive as a beater/family backup.

Little did I know!!

But thedrivetrain, the pristine well maintained drivetrain. Factory replaced trans at 32000 miles under warranty, PCM reprogrammed twice by factory. Oil changed proper, trans serviced…… what a glorious high mileage drivetrain. It must be retained for a future build and to do that, I need it ambulatory and insured and driving.

My wife and I yeatersay, as partial “empty nesters” spent Thanksgiving day on the maiden voyage of the vehicle. The vehicle has accrued about 300 miles post suspension/brakes/tires/alignment and the harsh fresh suspension has softened to what I call a 1990 Mustang GT ride quality and it handles like one.

I live in the Midsouth but not long. I drive all over the states daily but my wife has seen little. So we left Memphis to drive the new, clean, well worn but highly bad ass jalopy across Arkansas 412 from about Jonesboro to Springdale.
I believe I have hit 20 mpg average and that is in the hills of the Ozarks at strictly the speed limits. The car is stunning. By far the quietest, best handling, most powerful and authoritative, smoothest riding car I own. It’s comfortable for my wife to ride in, more so than her ultra low mile one owner 2002 Expedition 5.4. It out drive the exped all day long. It’s such a pleasure to drive in I’m shocked.


Just wanted to make folks aware that the V8 explorer, as bad off as mine was, is still capable of being a worth vehicle without it dismantling to merge into a Ranger (albeit great for that too).

If you find one that your mind can find some redeeming qualities in, a little surface rust, a few scratches….. consider a couple grand investment in it to redeem it. I was into the car $1500 on the MS title. I put $2500 into it all in parts and the alignment, $4000 in. Amortized over the next 60000 miles which is what I expect the car to now last without major input (maybe an alternator, etc) since all major systems with fully serviced), it will take me 5 years to accrue those miles and that’s about $80/month.

And it’s a car I had no idea I would enjoy driving as much as I have, enough so that on Black Friday in a hotel room in Springdale Arkansas, I sat up in bed to type this post out!

RBV!!! If only it was an OBS, that’s all that could be better!

Makes me really look forward to completing my 87 ranger 5.0 swap.

POW- my new road trip car!! And the suspension has broken in at Cadillac quality- no shxt!!!
I want 2 more just like it——

I never had a v8 explorer, but the wife and i did have a 98 sport with the 4.0. It was a really nice riding truck once we changed the front sway bar links out. Smooth and comfortable, for sure

Ok so I filled again and figured out the 22.13 was an error.

I have for35 plus years performed the same filling method for repeatable mpg calcs. The Walmart I stopped and fueled was auto stopped, clicked twice to ensure not a false. That’s the method. Turns out even though the following 285 miles was arduous and steep hilly and highly variable with speed, there is no way that I got a full fill at Walmart!! No friggen way.

To confirm matters, running heavy uphill grades for 60 miles to Blanchard Caverns near Mountain View, AR on that 19.2 fill, needle is pegged at full and doesn’t move in any direction up or down hills.
That proves I had a less than full fill at Walmart and that buffered my real MPG.

Im pissed about all the wasted time computing. I have no idea except in town (Memphis) it did 16.5 repeatable and verified.
Maybe Walmart fuel was shite but I doubt the product Valero that took 30 mins to pump in podunk Arkansas—— was any different/better/worse.

Actually, easy enough to find, just not as many offered as the v-6. I suspect most owners like the v-8 very much and tend to keep them longer/forever vs. the typical v-6 owner. I might have fixed up my wife's 2004 Mercury Mountaineer AWD if it had been a V-8 or at least grabbed the engine when the the harmonic balancer self destructed.

Pictures of yours would be nice.

Here, people just get them for the heads.

Pics will be posted tomorrow. Just got home from the Maiden Voyage with wife.

So at the Valero in Arkansas, the really slow pump, it only flowed about a gallon every 3 mins. Yes it took 30 mins to get my few gallons. $2.99/gal and it was last gas before the Caverns. The pump didn’t stop due to slow flow, the tank overflowed about 6 ounces of gas on ground. So!?$&&) the tank was FULL.

Fast forward, 250 miles exact later after pulling grades to and from the Caverns repeatedly, then the Ozark hills on AR9, 5, 25 and 14….. I expected that my mileage would be absolute crap and that my bubble would be burst.
This morn, went to Kroger, filled tank to the slight overflow, puke from overflow, only to ensure I repeated the fill identical! Turns out the pumps and tank will auto stop at 3 gallons shy of overflow and 2 gal shy of a real fill. I can’t depend on calculating on an auto stop plus a click or two.

Which means that original 22 was probably closer to 20/20.5 on initial run without serious grades.

I have renewed faith in highway mileage. Around town, I’m sure it’s crap or close to crap. That’s ok- it’s the road tripper now.

I would gladly stockpile 10 of them for drivetrains as was mentioned. I am a border in remission. Firearms, reloading components, vacuum tubes (for audio work), transformers for same, and now pre-2001 Fords (and probably 302s, top loaders and 4R70s) especially after I move to the farm. 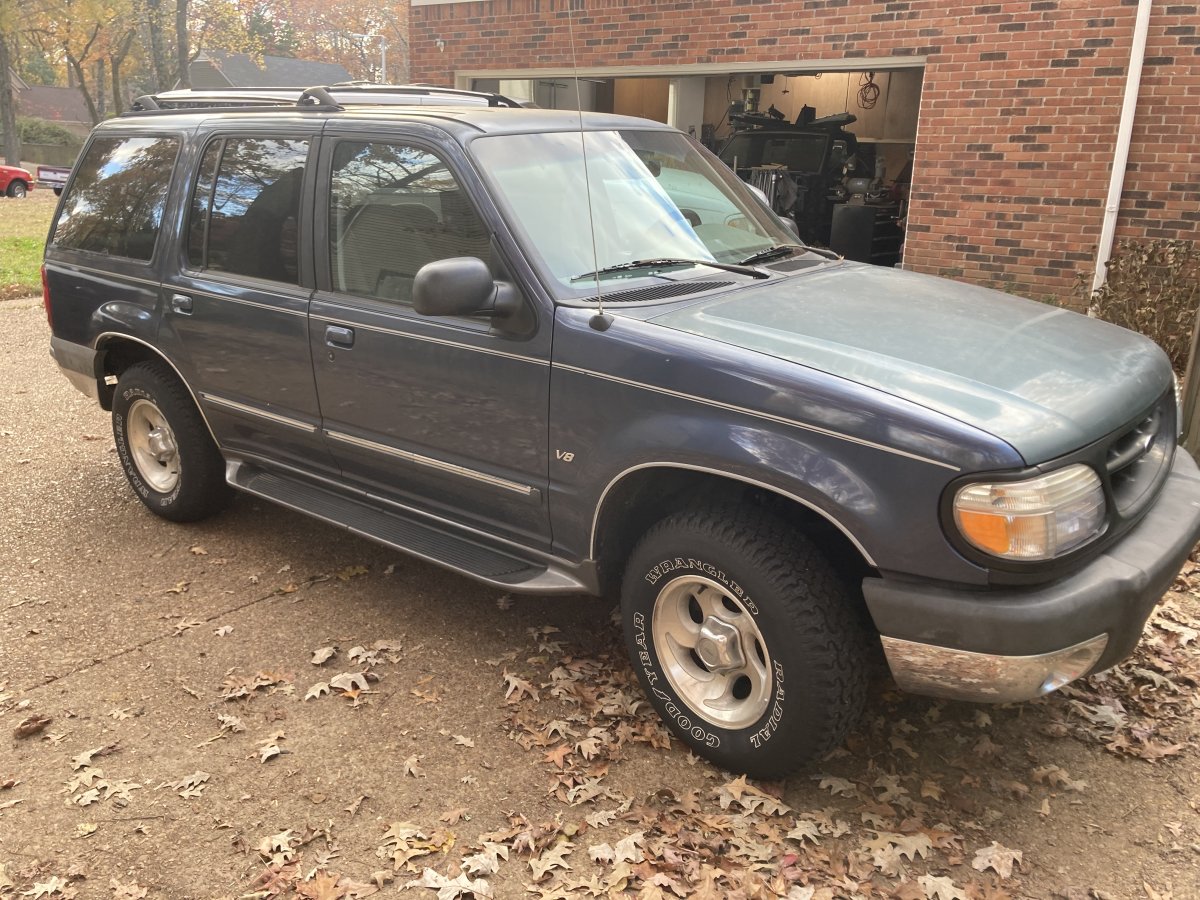 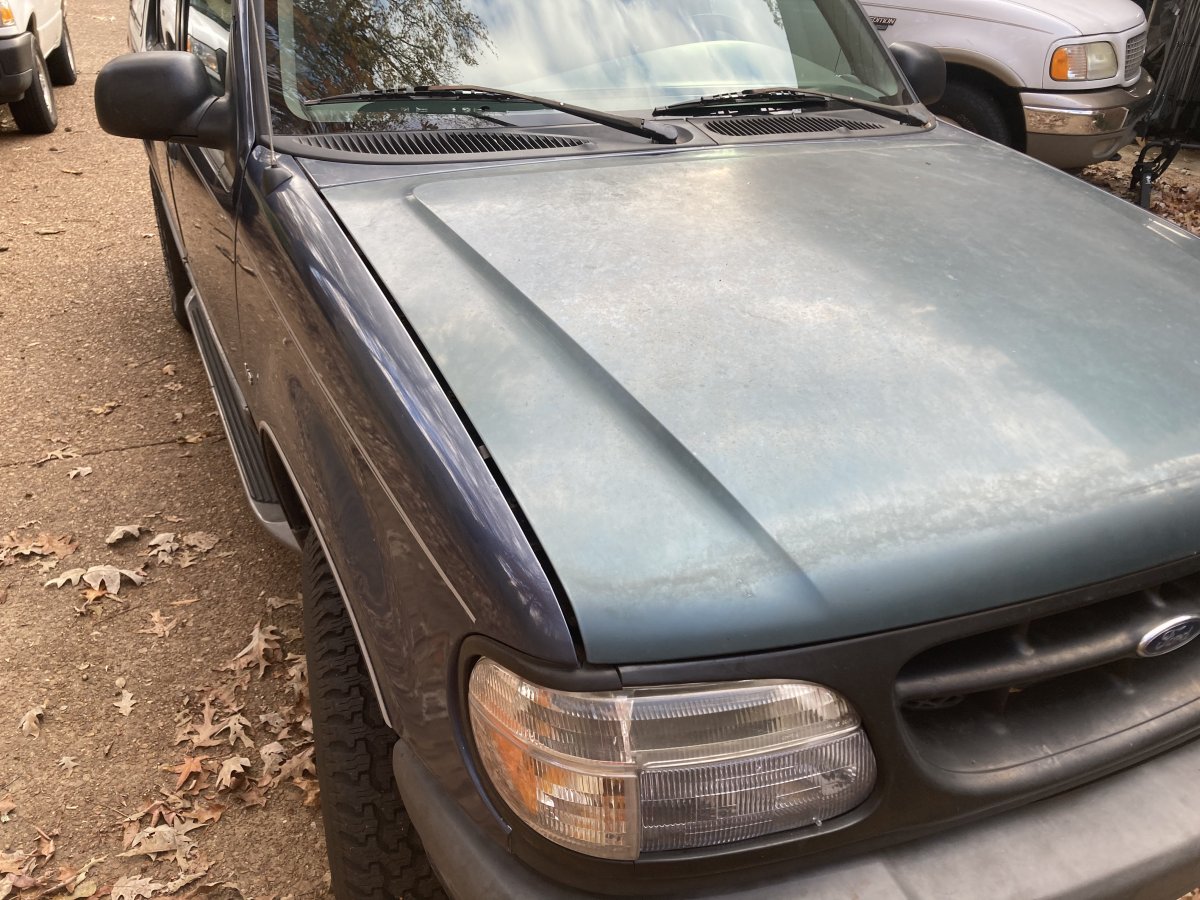 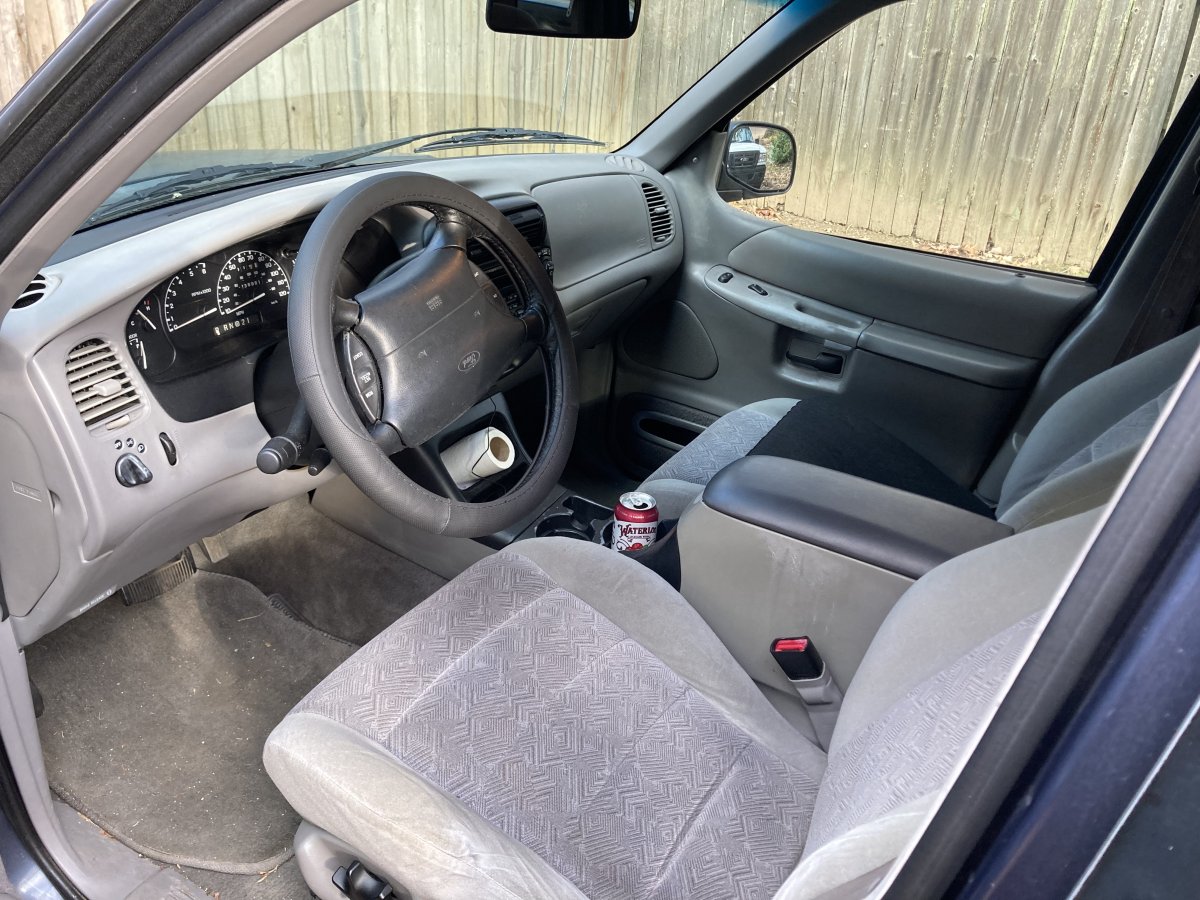 Green hood was the best of class at pull-a-part for several weeks. Don’t care- function over form.
In 60k miles I’ll have killed the drivetrain and it will be ready to donate to a ranger following a rebuild.

Where it’s been recently: 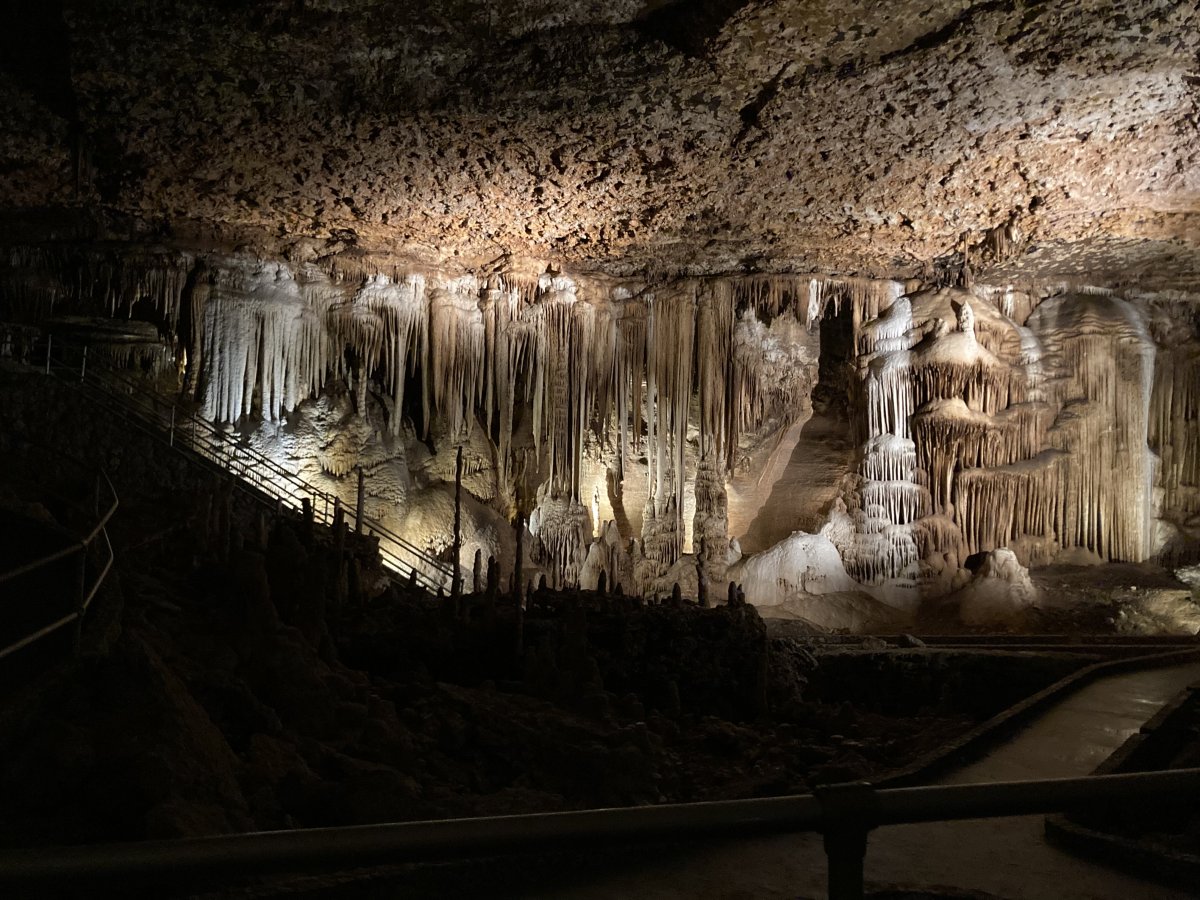 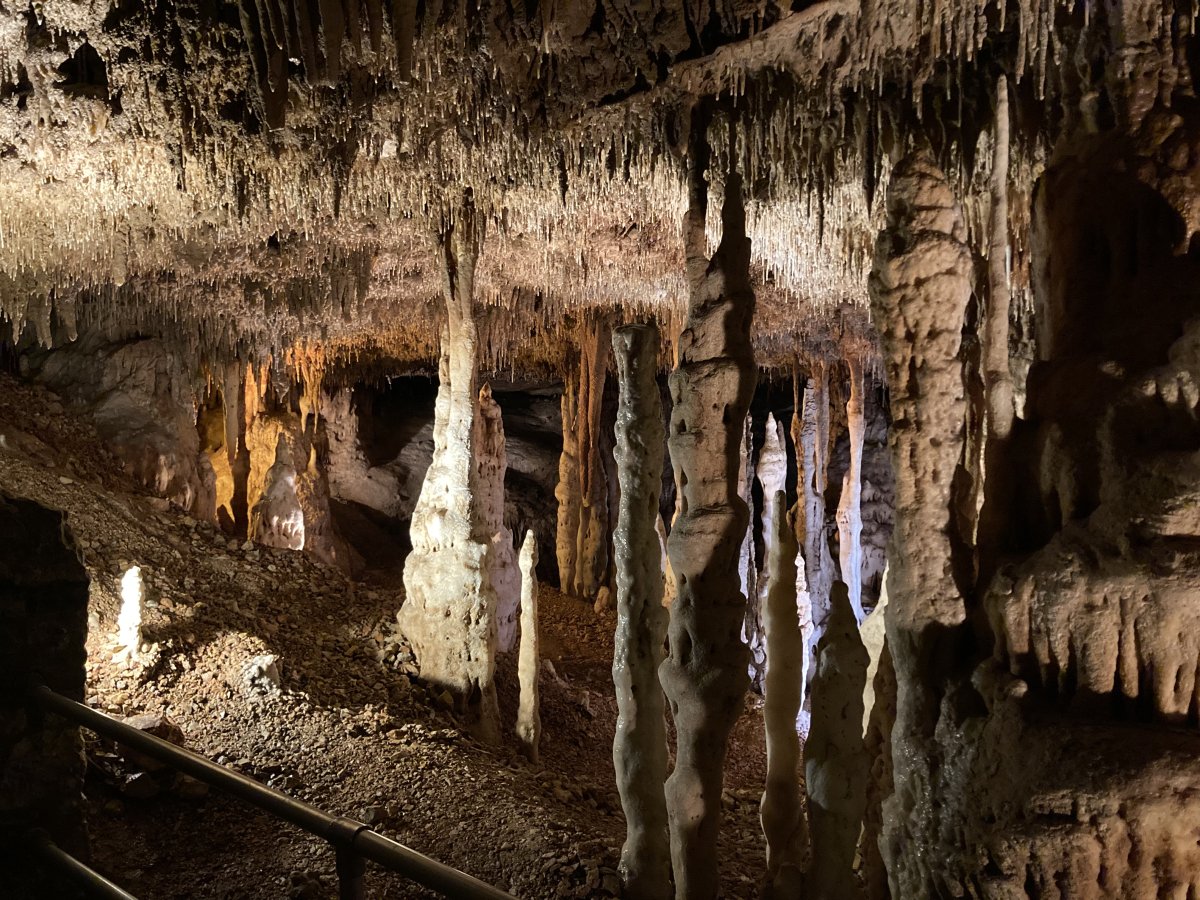